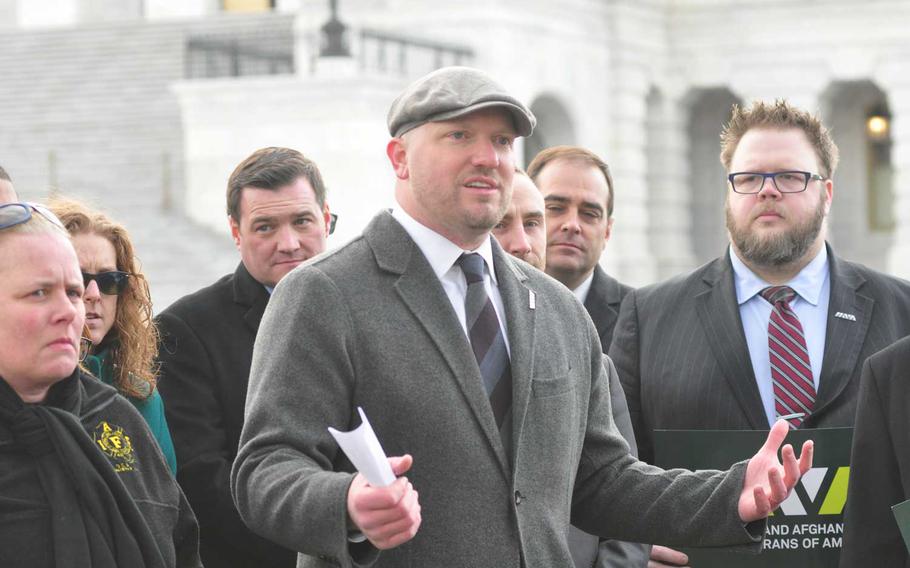 Paul Rieckhoff, CEO of Iraq and Afghanistan Veterans of America, calls on President Donald Trump to exempt from a travel ban all refugees who supported U.S. forces in Iraq. (Nikki Wentling/Stars and Stripes)

Paul Rieckhoff, CEO of Iraq and Afghanistan Veterans of America, calls on President Donald Trump to exempt from a travel ban all refugees who supported U.S. forces in Iraq. (Nikki Wentling/Stars and Stripes) 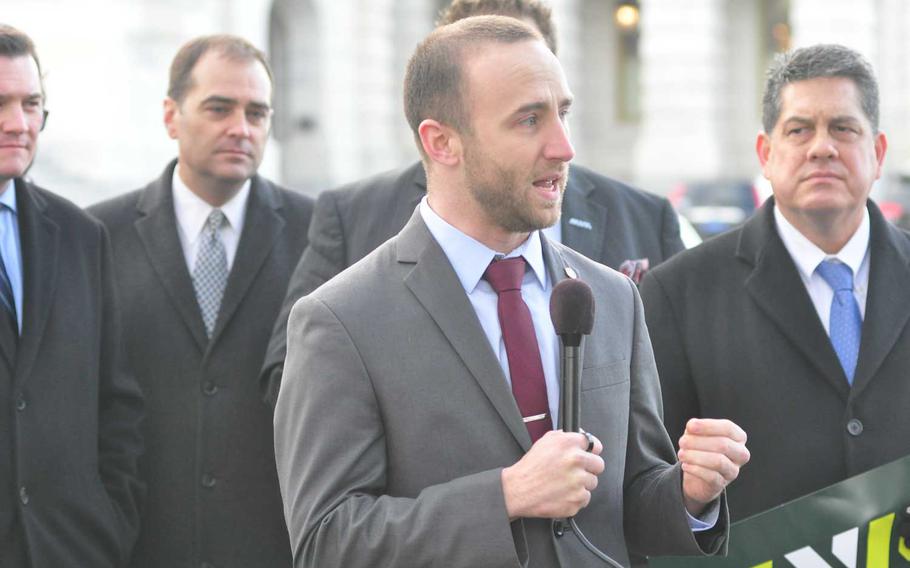 Kristofer Goldsmith, an Iraq veteran who works with Vietnam Veterans of America, criticizes Trump's travel ban at a gathering at the Capitol on Thursday, Feb. 2, saying it was "making liars" out of veterans who told their Iraqi interpreters they would be allowed entry into the United States. (Nikki Wentling/Stars and Stripes) 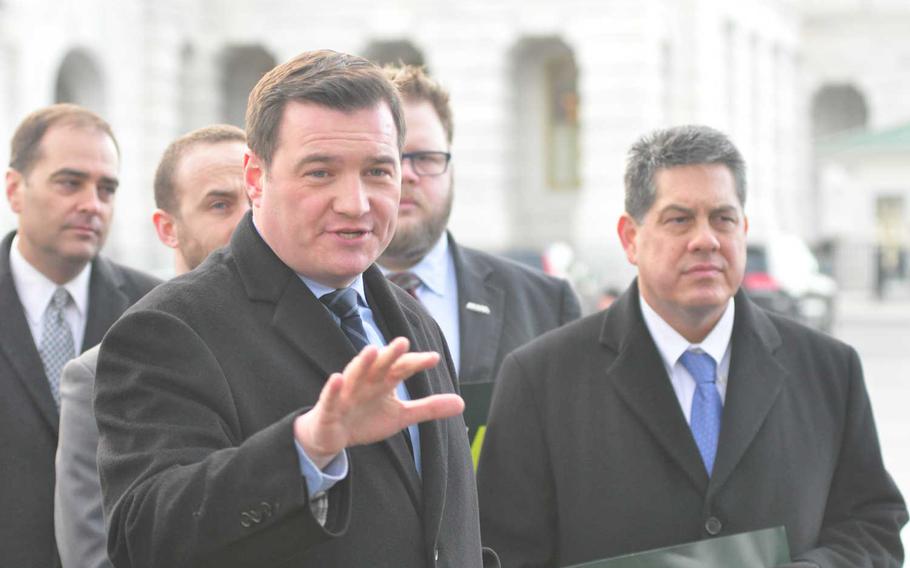 Matthew Zeller, CEO of No One Left Behind -- a nonprofit focused the last few years on helping Afghan and Iraqi combat interpreters settle in the U.S. – tells a group at the Capitol that Trump's executive order barring travel from seven countries “degraded our credibility aboard.” (Nikki Wentling/Stars and Stripes) 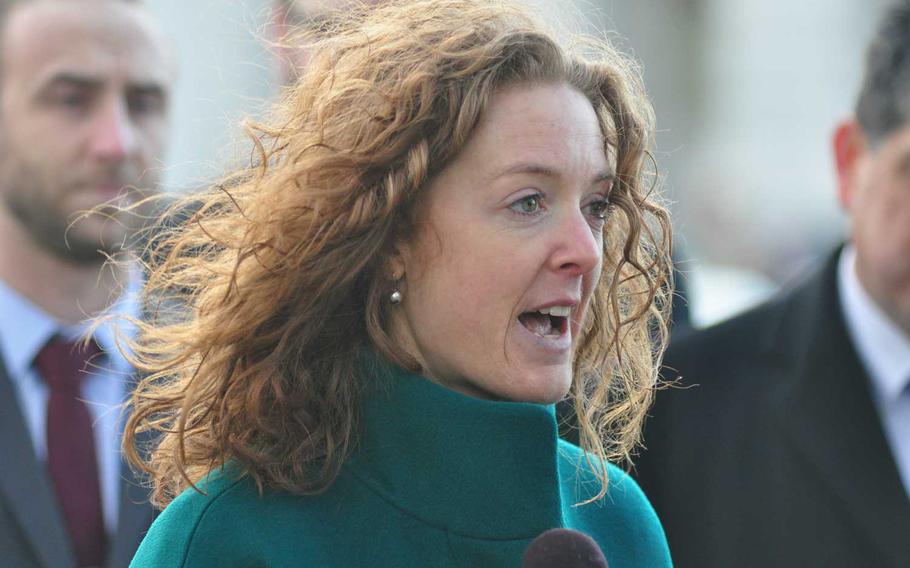 Allison Jaslow, chief of staff with Iraq and Afghanistan Veterans of America, tells a small crowd at the Capitol on Thursday, Feb. 2, that Trump's travel ban created uncertainty "that is not just good for any of our troops abroad." (Nikki Wentling/Stars and Stripes)

WASHINGTON – When Army veteran Paul Rieckhoff served in Iraq, he told his Iraqi translator that they would one day walk beside each other through New York.

Years later, it became a reality.

The translator gained a special visa to immigrate to the United States and he eventually started a family in Nashville, said Rieckhoff, the CEO for Iraq and Afghanistan Veterans of America. Now, an executive order signed Jan. 27 by President Donald Trump bars citizens of Iraq and several other countries from entering the United States and puts some translators and others who partnered with U.S. troops at risk, Rieckhoff said, claiming it damages America’s credibility with possible future allies.

“If you’re a young infantryperson on the ground in Iraq right now and you’re trying to move the ball forward, trying to do your job, you probably have an Iraqi standing next to you,” he said. “That’s a brother and sister in arms, and when that Iraqi hears that America will not protect him or her, they’re going to have second thoughts about standing with America.”

Rieckhoff was one of more than 20 veterans who converged on Capitol Hill on Thursday afternoon to urge Trump to exempt more refugees from the ban, including ones who gained visas through the Priority-2 Direct Access Program, which was created in 2008 for Iraqis who supported the United States.

The order – and subsequent instances of people being detained at airports across the country -- drew swift outcry last weekend from some veterans.

It has “degraded our credibility aboard,” said Matthew Zeler, CEO of No One Left Behind -- a nonprofit that has focused the last few years on helping Afghan and Iraqi combat interpreters settle in the United States.

“The uncertainty created by this executive action is just not good for any of our troops abroad,” said Allison Jaslow, chief of staff with IAVA. “Not just now, but in the future.”

The Department of Homeland Security said Iraqi translators and their families who have obtained Special Immigrant Visas to enter the United States would not be affected by the order, Stars and Stripes reported.

The Pentagon said Thursday that it would advocate that visas be provided to “proven” partners – including translators -- who have assisted U.S. forces in any of the countries included in Trump’s order. Pentagon officials were working to identify people who might be affected and for whom they could advocate .

Rieckhoff said the exemption for people holding Special Immigrant Visas was a “good first step,” but “doesn’t go far enough.” He called on Trump to “make this right, right now.”