Veterans seek an end to ‘tumultuous chapter’ at the VA 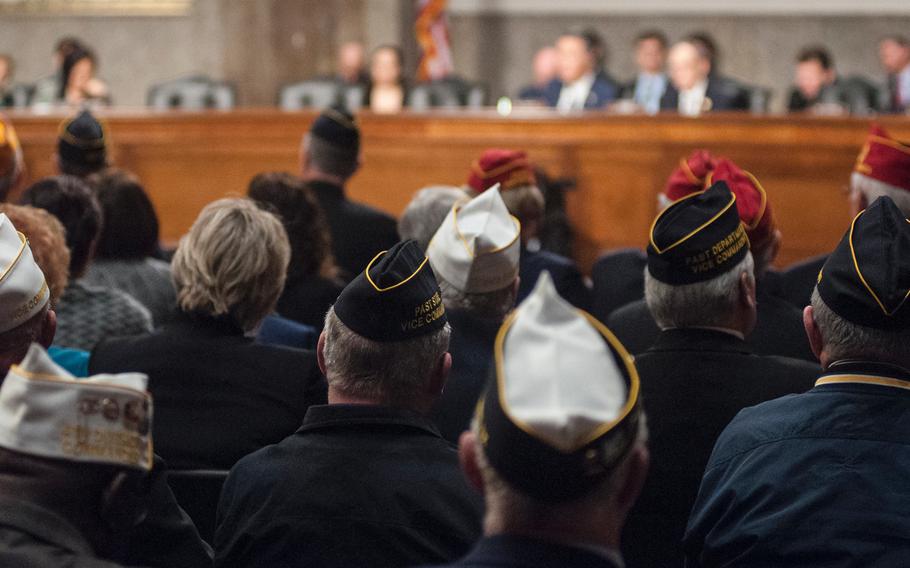 WASHINGTON — As Washington roiled this week over allegations raised against Rear Adm. Ronny Jackson, the failed nominee for secretary of the Department of Veterans Affairs, Vietnam veteran Garry Augustine was in Potomac, Md., with leaders of the VA’s vast health care system.

Augustine, a longtime veterans advocate and director of Disabled American Veterans, described a scene at the meeting that sharply contrasted with the turmoil surrounding Jackson’s nomination.

“They’re focused on doing what they need to do,” he said. “No hospitals have closed their doors, appeals are getting resolved, veterans are getting buried in the cemeteries – the VA continues to move forward, even with all the controversy about the secretary.”

However, Augustine and other veterans worry the tumult will leave Americans with a negative impression of the VA – one that will endure far longer than the few days that it took for Jackson’s nomination to capsize. To prevent any more damage and delay, lawmakers and veterans groups are calling on President Donald Trump to accept their input before naming his next nominee.

They’re imploring the White House for stable leadership so major reform efforts at the agency – now stalled – can be revived.

“We’re not asking for a thumbs-up or thumbs-down on individual people. We’re not offering up a list of names or anything like that,” AMVETS director Joe Chenelly said. “What we’re asking for is the White House to let us present what we think are some important characteristics.”

But Jackson’s nomination, announced by Trump over Twitter, came as a surprise. Jackson is a White House physician assigned specifically to the president. Most people knew him only from his briefing to White House reporters in January, when he described Trump’s “excellent health” and praised his genes.

“I think for a lot of us, most of our contact with him had mostly been when he came out and gave the president’s medical results,” American Legion Executive Director Verna Jones said.

Chenelly’s first reaction when Trump tapped Jackson for the job was, “We don’t know this guy.”

“When the Tweet came out, we had had no opportunity to express ourselves, no engagement, before that happened,” Chenelly said.

Some veterans groups were concerned with Jackson’s lack of management experience and his ability to take leadership of the second-largest federal agency, with more than 375,000 employees and a nearly $200 billion budget. Many of them were looking toward his confirmation hearing to learn what he knew about the VA.

But the hearing was abruptly postponed Tuesday by the Republican and Democratic leaders of the Senate Veterans’ Affairs Committee, who had received damning allegations about Jackson from 23 of his current and former colleagues in the White House Medical Unit.

More and more details of those allegations were revealed during the subsequent days, painting Jackson as an unstable and power-hungry leader who got drunk on duty and doled out prescription medication, including opioids.

Jackson’s bid for VA secretary lasted less than a month.

When Jackson withdrew from consideration as VA secretary early Thursday morning, he described the accusations as “false and fabricated.”

“Going into this process, I expected tough questions about how to best care for our veterans, but I did not expect to have to dignify baseless and anonymous attacks on my character and integrity,” Jackson said in a statement.

Trump supported Jackson through the week and on Thursday blamed his failed nomination on “obstructionist” Democrats.

Democrats placed blame on the White House for not catching any of the problems during their vetting of Jackson.

Iraq and Afghanistan Veterans of America, known as IAVA, called the situation with Jackson a “painful and tumultuous chapter” for the VA – part of a “volatile, damaging saga” that doesn’t have a clear end.

“Our veterans are simply looking for a competent, proven and dynamic leader with integrity that can lead our nation forward out of this storm of darkness and into a brighter future,” the IAVA wrote in a statement.

“The White House will hopefully now put forth a name that will be someone everyone can agree on,” Augustine said.

Veterans weigh in Trump told Fox & Friends on Thursday morning that he already had another nominee in mind. He said the person had “political capabilities” but declined to name the individual.

In a flood of statements, Democrats and veterans groups urged Trump to listen to their input before making a decision. Vietnam Veterans of America asked Trump “not rush to judgement” for the next nominee.

“Now would be an excellent time for the president to seek input from the congressionally chartered veterans’ service organizations before naming his next nominee to lead the VA, a department that is critical to the health and well-being of all veterans and our families,” Rowan said.

Questions have been raised during the past week about what mix of experiences and attributes a VA secretary should have in order to succeed in the job.

Since the VA became a Cabinet-level department in 1989, there have been nine secretaries and four acting secretaries, including an Army general, company president, health care executive and U.S. ambassador.

Former VA Secretary Bob McDonald had retired as CEO of Proctor & Gamble when former President Barack Obama nominated him to the Cabinet position in 2014. In an interview Thursday night on MSNBC, McDonald said the next VA secretary should be someone with experience leading a large organization. Moreover, the agency needs consistency, he said.

“If the VA were a Fortune 100 company, it would be Fortune 9. It would be the ninth largest company in this country,” McDonald said. “I auditioned for 29 years before I became the CEO of Proctor & Gamble. It’s lunatic to think that you can put a new CEO in every four years or eight years and drive sustained success.”

Augustine said he simply would like to see a nominee with a breadth of knowledge about the VA who understands it is more than just a health care system. The VA is responsible for distributing millions of dollars in benefits each month to veterans and their families, and it manages 135 veterans cemeteries across the country, among its other responsibilities.

“The VA takes care of veterans in all aspects of life, and I think anybody who is considered for that position should be knowledgeable about that,” Augustine said.

Like McDonald, Augustine said the nominee “should have experience running a large organization.”

“Someone who will hold themselves as well as their staff accountable for their actions,” he said.

Chenelly urged Trump to look outside his personal circle for the next nominee. He also pushed for the White House to include women in its search. A woman has never been nominated to the job.

In asking the White House to accept input, Chenelly said the administration should limit it to only nonpartisan veterans organizations, or, as Augustine put it, “true veterans service organizations.”

When Jackson was still being considered for the job, veterans groups wondered which groups or individuals he would allow to influence his decisions.

Concerned Veterans for America, a conservative group that’s part of the Koch brothers’ political network, has gained more prominence under the Trump administration and often clashes with older and more established veterans organizations in Washington.

The Independence Fund is an advocacy organization that – similar to CVA – advocates for more use of private-sector health care. In a short statement, the group said the next VA secretary “must share the president’s vision to maximize choice for veterans.”

Reform stalled by turmoil The same day that Jackson withdrew his nomination, Trump appeared at an event organized by the Wounded Warrior Project and called on Congress to approve legislation reforming the VA program that allows veterans to receive private-sector medical care.

“And now we’re going to go for Choice, and we’re going to get choice,” Trump said. “And that’s another one that I’ve wanted right from the beginning. And we’ll get that done, too.”

The debate over the program, called VA Choice, has been long and contentious, and former VA Secretary David Shulkin blamed it for his ouster in March. He said some political appointees at the VA viewed him as an “obstacle to privatization.”

Lawmakers and veterans advocates agree the VA Choice program needs to be fixed, but there’s disagreement over how far veterans’ care should be pushed into the private sector. The crux of the debate is whether the VA should remain the gatekeeper to decide who goes into the private market, and when. Many veterans organizations believe “unfettered choice” would erode VA resources and eventually dismantle the agency.

There’s been little apparent progress on the issue in the past month, but Rep. Phil Roe, R-Tenn., said Thursday: “I’m confident we can get a good bill to the president’s desk in the near term.”

The Choice program, rife with funding issues, is expected to run out of money the first week of June unless Congress acts. In a statement Wednesday evening, VA Press Secretary Curt Cashour said the agency was focused on getting legislation passed by Memorial Day, which is May 28.

The VA statement goes on to list the priorities of Robert Wilkie, who came from the Defense Department to fill in as acting VA secretary until a nominee makes it through the confirmation process. Wilkie’s main goal is to “restore regular order” to the agency, Cashour said.

Cashour asserted the VA’s new leadership is now “firmly aligned with President Trump and his priorities.” Those employees who “were wedded to the status quo and not on board with this administration’s policies or pace of change” departed the VA, he said.

The American Legion this week voiced concern about the lack of permanent leadership at the VA.

In addition to the secretary, the undersecretary of health – who oversees the agency’s vast health care system that provides services for 9 million veterans – is a temporary appointee. The VA’s chief information officer resigned last week. The Senate just confirmed Paul Lawrence on Thursday as the undersecretary of benefits – a position that had been without a permanent leader since October 2015.

Questions have been raised about the planned modernization of the VA’s electronic health record – a multibillion-dollar project. Shulkin spearheaded the effort and was in contract negotiations with Cerner Corporation when Trump fired him in March. Cashour said one of Wilkie’s top priorities is to finalize a decision on the electronic health record. The VA has refused to comment on the progress of the contract negotiations.

Also, the status remains unclear on an executive order that Trump signed in January that directed the VA, Defense Department and Department of Homeland Security to develop a plan to combat veteran suicide. Shulkin said he would undertake an effort to provide mental health care to veterans for one year after they transition out of military service.

The agencies were supposed to develop a plan by March 9 and implement it during the following 180 days. Shulkin was fired March 28.

There are other issues that need to be addressed, from battles in Congress over expanding benefits for veteran caregivers to how the VA is implementing major changes to the GI Bill. Before employees can “buy in” to changes and Congress can work on new ones, the VA needs a permanent leader, Chenelly argued.