Veterans poised to get 2 percent payout raise on Dec. 1 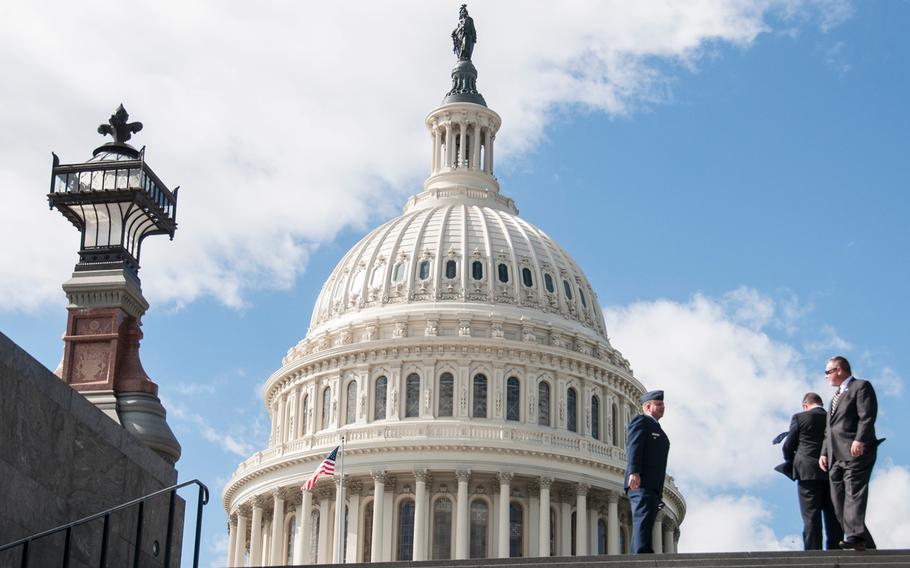 Buy Photo
Visitors, including a U.S. servicemember, stand outside the Capitol in Washington on Wednesday, Oct. 25, 2017. Military veterans could see their payouts increased by 2 percent starting in December under legislation slated for presidential approval, according to a report on Friday. (Carlos Bongioanni/Stars and Stripes)

WASHINGTON — Military veterans could see their payouts increased by 2 percent later this year – one of the biggest gains in at least six years – under legislation slated for presidential approval next week.

The plan, the Veterans’ Compensation COLA Act of 2017, would boost cost-of-living payments and could be reflected in the recipient’s January checks. The legislation was passed unanimously by the Senate this week, following approval of an identical bill in the House during summer.

For the average recipient, the increase could mean an extra $25 a month, or $300 a year.

“I’m proud to carry this bill to provide important cost-of-living adjustments to our nation’s veterans and their dependents,” Bost said Wednesday in a statement following the legislation’s approval by Senate. “It’s vitally important that we ensure the men and women who have served receive the benefits they have earned.”

The plan, H.R. 1329, will now go to President Donald Trump’s desk next week. If signed, it is slated take effect Dec. 1, according to Bost’s office.

With that timing, the higher payouts could be reflected in veterans’ checks as early as January, said Joy Ilem, national legislative director for the Disabled American Veterans group.

“We’re extremely pleased. This is an important adjustment,” she said. “It provides a slight adjustment in their disability benefits. Some of them are on a very fixed income and it may be the only income they receive. So every bit helps.”

The news was lauded by other veterans groups as well.

We are “pleased that legislators are willing to put more money into the pockets of veterans,” said Joe Plenzler, director of media relations for the American Legion.

The increases could impact an estimated 4.9 million veterans. The increases also could vary based on the level of disability for each veteran, Plenzler said. For example, veterans who are fully disabled would see larger boosts in their payouts. There’s more than 580,000 fully disabled veterans, according to the most recent figures from the Department of Veterans Affairs.

The cost-of-living increase for veterans, which is introduced annually as separate legislation tied to Social Security payment increases, was approved by Congress sooner than usual, Ilem noted.

Earlier this year, a Trump budget proposal was weighing several cuts from veteran compensation programs for disabled veterans, including a practice to “round down” veterans’ cost-of-living adjustments. But the Department of Veterans Affairs later said it was backing off several proposed cuts following backlash from the country’s six largest veterans service organizations.

“This is going to be a very welcome increase,” Ilem said. “It’s a very important bill for veterans.”