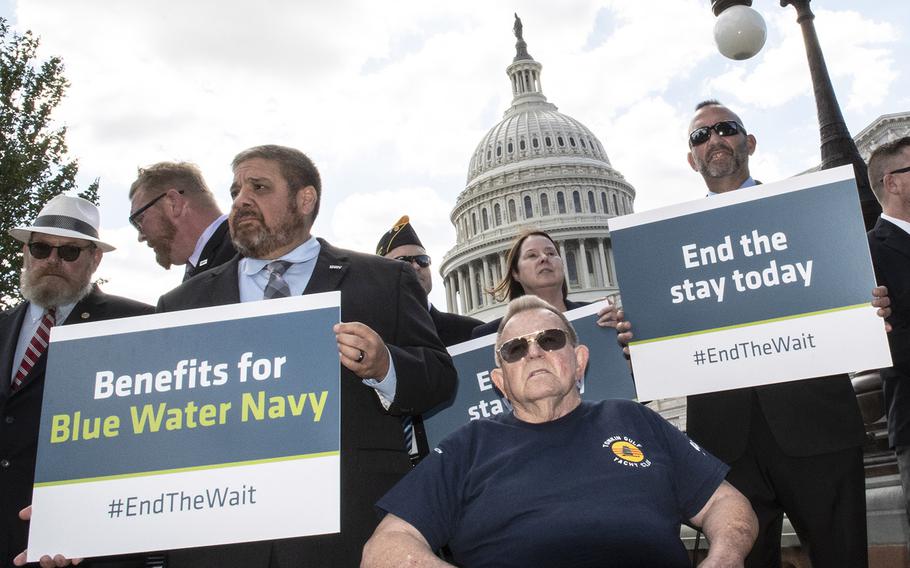 Bobby Daniels, foreground, and other veterans await the start of a Sept, 24, 2019 Capitol Hill press conference during which lawmakers and veterans urged urged the administration to provide health care and benefits to Vietnam-era veterans living with the effects of exposure to Agent Orange. (Joe Gromelski/Stars and Stripes)

WASHINGTON — Vietnam veteran Bobby Daniels has between 24 to 32 months to live, and he’s using some of those to ensure that his wife receives the benefits she’s owed when he’s gone.

Daniels, 79, is diagnosed with terminal prostate and bone cancer, thought to be associated with his military service. He served aboard the USS Lexington and is a “Blue Water” Navy veteran — those who worked aboard aircraft carriers, destroyers and other ships in the territorial seas of Vietnam.

Daniels and other Blue Water veterans — a group that fought for years to prove they were exposed to the chemical herbicide Agent Orange — saw some major wins during the past year. They won a federal court case that granted them VA benefits. In June, they witnessed the passage of a new law, the Blue Water Navy Vietnam Veterans Act of 2019, that reinforces their eligibility for disability compensation.

However, about a week after President Donald Trump signed the legislation, VA Secretary Robert Wilkie imposed a hold on processing Blue Water claims until next year, citing a provision in the new law that says the secretary can enforce a stay on claims until the law goes into effect Jan. 1, 2020.

Daniels has been attempting to have the VA recognize his Agent Orange exposure so his wife can receive survivor’s benefits, known as disability and indemnity compensation, when he dies. The couple has taken a second mortgage on their home to pay for his medical expenses, he said.

They celebrated it as a victory when Trump signed the new law in June. Then, with Wilkie’s announcement, Daniels “felt like somebody sledgehammered me in the mouth.”

Daniels traveled from his home of New Madrid, Missouri, to join the Veterans of Foreign Wars, Vietnam Veterans of America and Disabled American Veterans, as well as Sen. Jon Tester, D-Mont., and Rep. Mark Takano, D-Calif., outside the Senate on Tuesday. The group urged Trump to lift the hold on claims. Earlier Tuesday, nine veterans organizations delivered a letter to the White House urging Trump to meet with them about the issue.

Shane Liermann, a leader with Disabled American Veterans, said they had recently received a response from Wilkie about the delay. His response prompted them to directly appeal to Trump.

“It is apparent our pleas have fallen on deaf ears,” Liermann said.

In an official statement this summer, Wilkie justified the delay by arguing the VA needed time to implement the Blue Water Navy Vietnam Veterans Act without causing adverse effects on other veterans awaiting claims decisions.

“We are working to ensure that we have the proper resources in place to meet the needs of our Blue Water veteran community and minimize the impact on all veterans filing for disability compensation,” Wilkie said in the statement.

Tester said his office has asked the VA about the rollout of the claims processing Jan. 1 but has not received any details.

“We’ve done our job, the courts have done their job, and now they need to provide the benefits,” Tester said. “As far as I’m concerned, they should start right away, not January 2020. And if there are any excuses in January 2020, I may pull what little hair I have out.”

The lawmakers and veterans who spoke Tuesday believe the VA could could process at least some Blue Water claims before Jan. 1, including those like the one submitted by Claudia Holt.

Holt, 78, is the widow of a Blue Water Navy veteran who died in May. Frank Holt was part of a search-and-rescue team stationed aboard the USS Prichett during the Vietnam War. He was diagnosed with lung cancer and struggled for 19 years with various illnesses.

Claudia Holt on Tuesday clutched a portrait of her husband from his military days. She brought the photo to Capitol Hill from their home in Fruitland, Maryland, where it usually sits next to a cold can of Natural Light beer, his favorite.

Holt said the VA’s delay on claims processing is holding up her claim for disability and indemnity compensation — money that would offer her financial certainty.

“Before he died, he told me I would need to fight for survivor’s benefits,” Holt said. “He said, ‘You fought for me, now you fight for you.’ And now, here I am at 78 years old, worried about how I will pay my bills or whether or not I will lose my home, keep food on my table and a roof overhead.”

Bobby Daniels doesn’t want his wife, Judy, to be in Holt’s position. He traveled from Missouri, he said, to try to get Trump’s attention.

“Sometimes late at night after my wife has gone to bed, I get up in the rural area where I live and I scream into the darkness. That’s where I’m at,” Daniels said. “I have so much fear and anxiety bottled up inside of me, not knowing how long I’ll be here and not knowing how my wife and son will be able to survive without my help financially.”