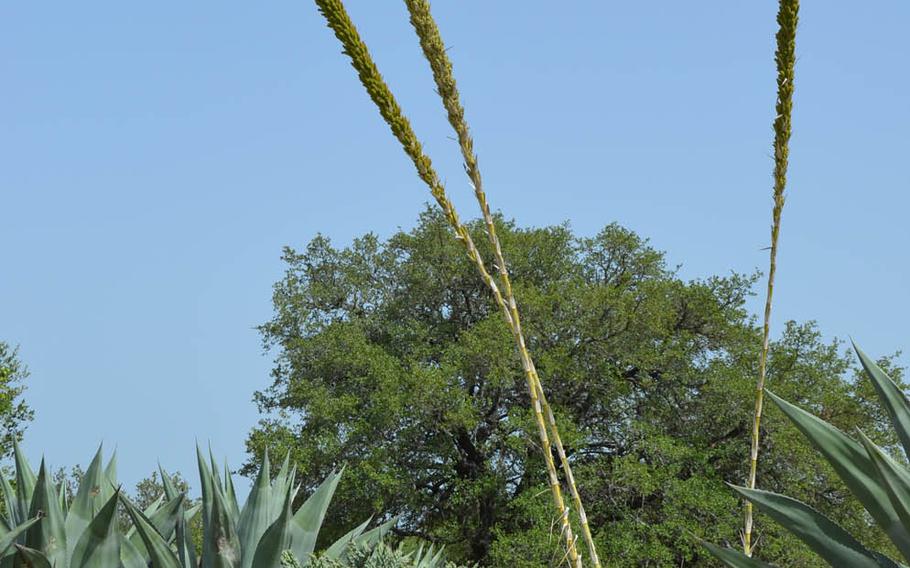 A sotol plant grows along the roadside near Desert Door Distillery in Driftwood, Texas, on July 16, 2018. (Rose L. Thayer/Stars and Stripes)

A sotol plant grows along the roadside near Desert Door Distillery in Driftwood, Texas, on July 16, 2018. (Rose L. Thayer/Stars and Stripes) 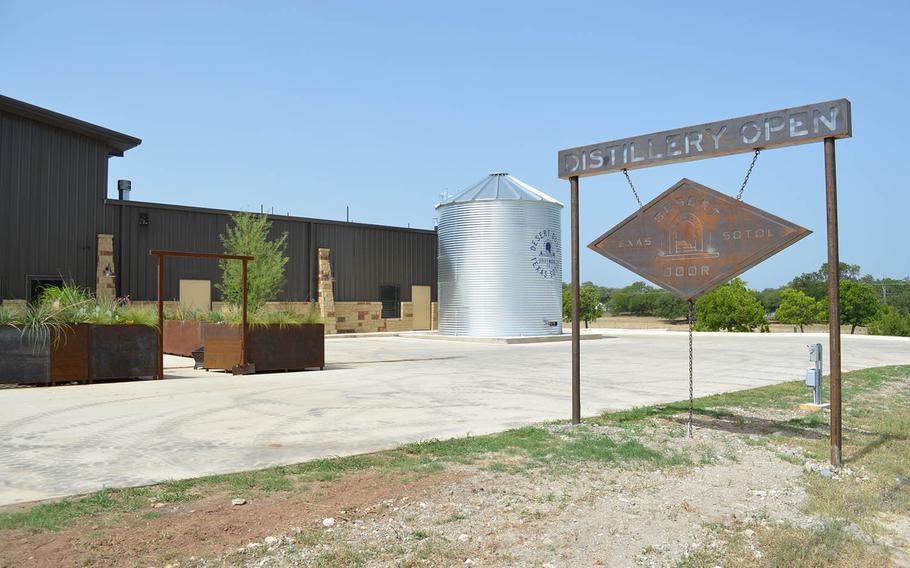 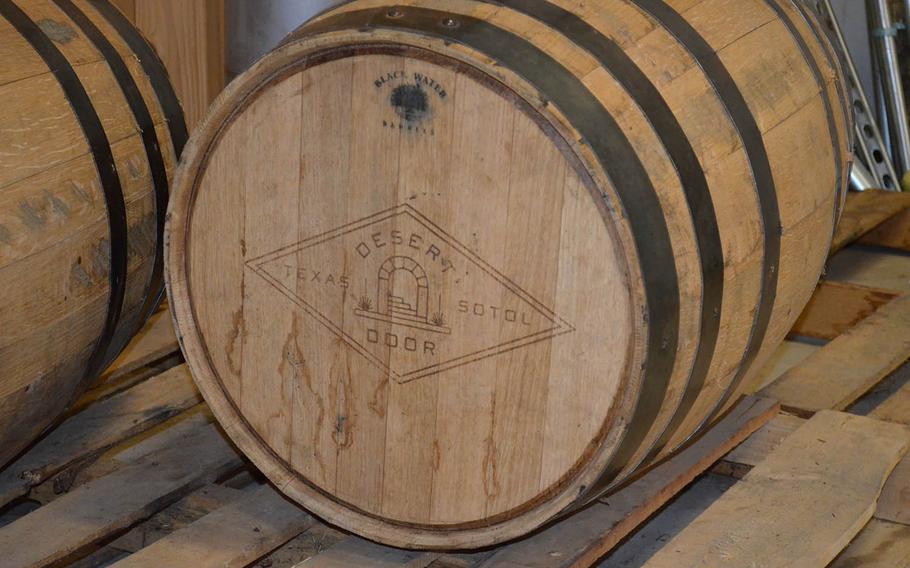 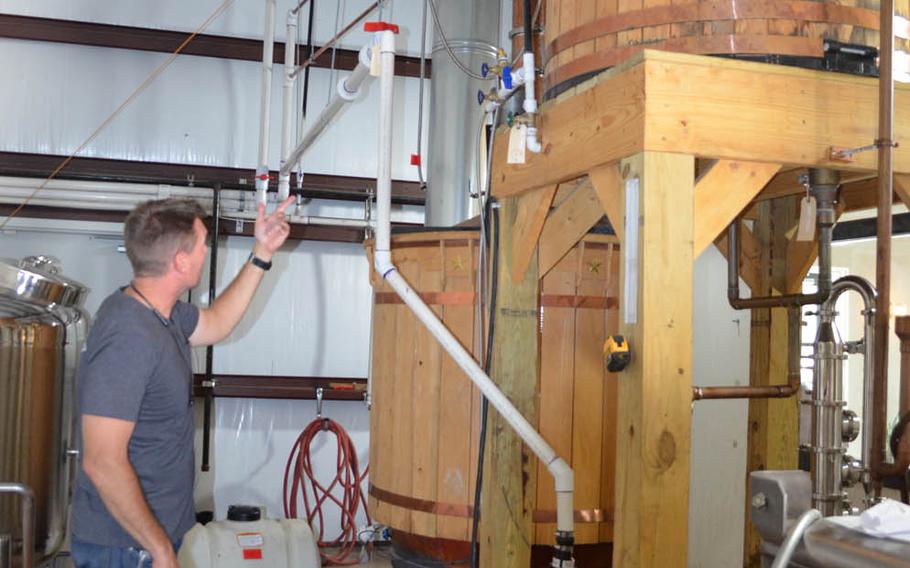 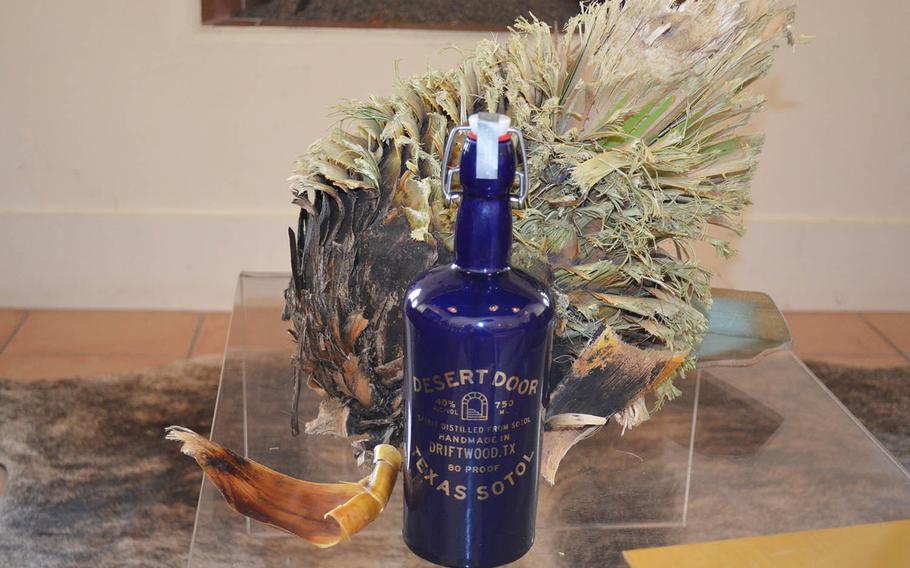 A bottle of Desert Door sotol, sits in front of "Wilson," the nickname given to a dried sotol plant heart used to create their alcohol. Harvested in west Texas, the owners equate the center of the plant to that of an artichoke. (Rose L. Thayer/Stars and Stripes) 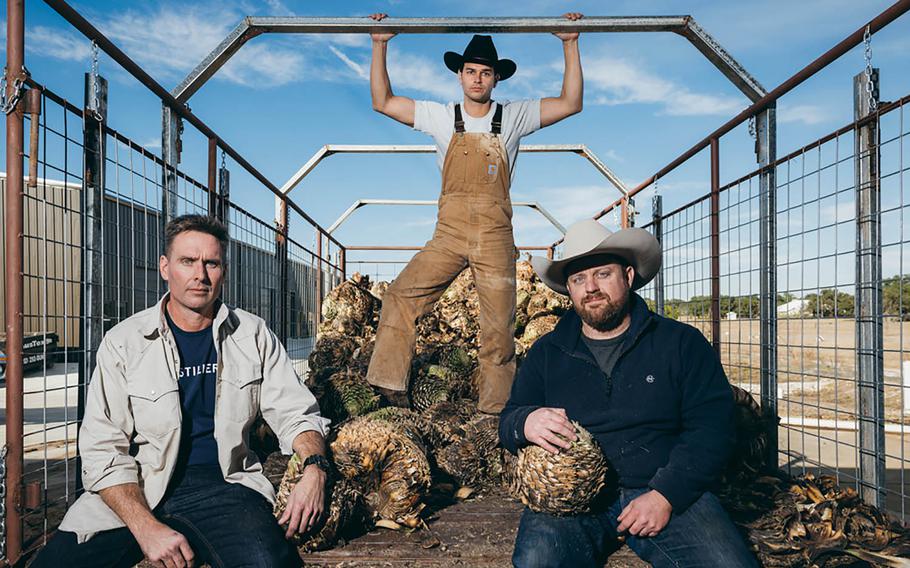 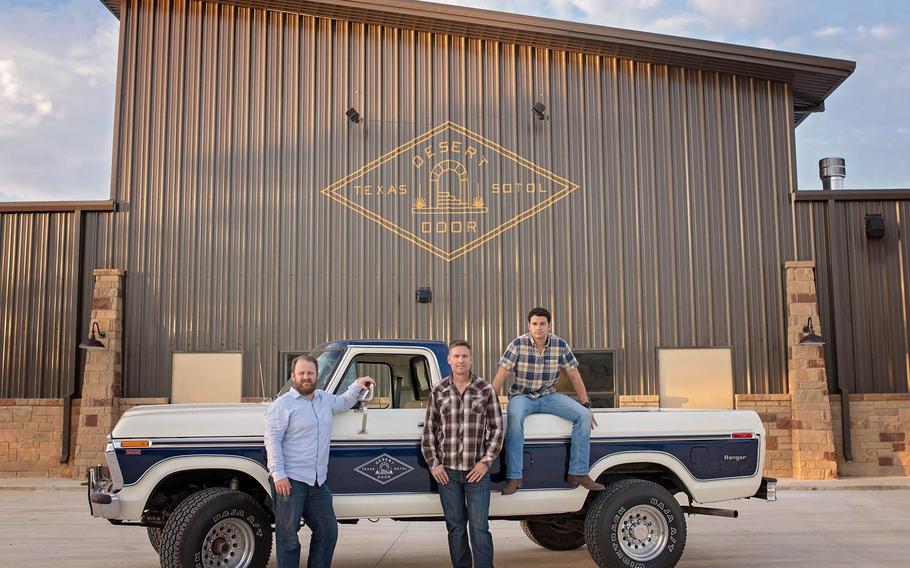 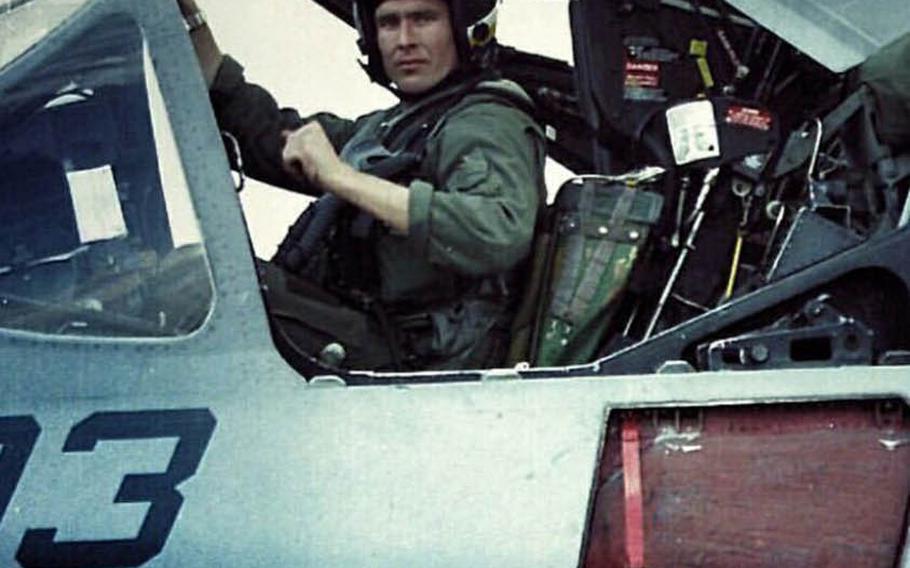 Brent Looby is a former Marine Corps pilot who retired in 2017 as a lieutenant colonel. (Courtesy photo)

DRIFTWOOD, Texas — Kentucky is known for its bourbon, and Tennessee for its whiskey. Then there’s Mexico and tequila; Russia and vodka. But in Texas, as bold and brazen as the Lone Star State might be, there’s no distinctly Texan liquor.

Three veterans are looking to change that, putting to use their experience from three military branches and their deep Texas roots.

In November, Ryan Campbell, Brent Looby and Judson Kauffman launched Desert Door Distillery, selling sotol, an alcohol made from a west Texas plant of the same name. Operating out of Driftwood, Texas, the distillery is south of Austin and just minutes from the famed Salt Lick barbecue restaurant—also a veteran-founded Texas institution.

“We love Texas and thought what better thing to give to the state we love than a liquor that’s unique to it,” said Campbell, 39, a former Army intelligence soldier who served five years, leaving as a sergeant.

“There are a lot of perceptions about Texas,” Campbell said. “As a brand, people think of Texas as being the star and red, white and blue and spurs and cowboy hats. People who live in Texas, we know it’s much more nuanced and cool and romantic.

“We wanted to tell this story of west Texas and the plant and its relationship to that and how interesting it is. It’s the story of Texas that Texans know but we don’t feel has truly been communicated.”

The three men met in fall 2015 at the start of their coursework at the University of Texas at Austin’s executive MBA program. During a class called “New Venture Creations,” they came together to work on a project.

For their project, the men first looked into lofty inventions involving drones or multimillion-dollar prototypes.

“Brent and I had these ideas to try and save the world,” Campbell said.

Kauffman, 36, a former Navy SEAL sniper who spent eight years in the service, however, suggested they have a little more fun, and research the craft brewing and spirits industries. Though he was raised in the east Texas town of Longview, the sixth-generation Texan recalled visiting his uncle in west Texas. During hunting trips, he learned about native plants, including how “old-timers” made moonshine from sotol or “desert spoon,” but it always tasted terrible.

The three began researching the plant, learning about cave drawings dating back 10,000 years of people using self-fermented sotol plants as an intoxicant during ceremonies.

For thousands of years, people of the region have used the plant for sustenance and to create tools, which inspired the “desert spoon” nickname, since its leaves can be dried into a spoon shape. It is considered by some to be a desert weed because of how quickly and commonly it pops up in the Chihuahuan Desert, which explains why ancient civilizations would have relied so heavily on it.

“We fell in love with that and then thought, ‘Well, what if you can make it taste good?’ ” said Campbell, who calls himself a Texan by choice. “We hopped in the car and drove out to west Texas, cut down the first sotol plant we saw and brought it back to my kitchen and we started cooking it in my house nine different ways to Sunday.”

It all tasted terrible and took so much work for such a little amount of product, said Looby, 48, a Marine Corps pilot who served 20 years and retired in 2017 as a lieutenant colonel.

“But we really tried to rationalize it was good,” said the Midland native and fifth-generation Texan. They didn’t give up, and six months later they felt they finally had something they could proudly serve and the class project grew into a full-fledged business concept. By their May 2017 graduation, the future home of Desert Door was in the design phase; it officially opened in November.

“I’d say we used more skills from the military than we did our business degree,” Campbell said —whether during early planning meetings, understanding each other’s work ethics or having a shared understanding of military language and common practices.

“Because we have shared values (from the military) is probably the cornerstone of that, but there’s the trust that was already there,” Looby said.

In that time, they’ve secured sale of their blue-bottled spirit in two major Texas liquor stores — Spec’s and Twin Liquors — and are on about 40 bar menus, mostly in Austin. Desert Door is available only in Texas right now, and the owners don’t see themselves reaching beyond their home state anytime soon.

“If you can’t sell the first uniquely Texas spirit to Texans, you got no business going anywhere else,” Campbell said.

Jake Maddux, a Marine Corps veteran and founder of the Austin restaurant the Brewer’s Table, has added Desert Door to his bar menu.

“It’s different and unique,” he said. “It’s a good product made by veterans and it’s local.”

‘Transformative’Others in the industry have praised how quickly the veterans were able to get Desert Door up and running. Kauffman credits the military for their efficiency.

“The military teaches you time management,” he said. Aside from efficiency, Kauffman said they all share an idea of “what makes an organization healthy and what works well.”

“People don’t give the military credit,” Kauffman said. “No one has spent more time or money figuring out how to make a team function highly than the military has. One reason we moved so fast is because we understand how to build a team from the ground up.”

Outside of Desert Door, Kauffman’s full-time job is running Exbellum, a company he founded to help Special Forces veterans market themselves and gain meaningful civilian employment.

“When I got out of the Navy, I wanted to get into business,” he said. “I had a lot of opportunities to come in at an entry level role. I’d just spent a decade in one of highest performing organizations in the world; I don’t need to start at entry-level position.

“The reality is hiring managers and human resources people couldn’t understand the value I could bring to the table, and I couldn’t articulate that.”

He channeled that passion into a problem-solving business and launched Exbellum in 2012.

“It’s important to me personally because I’m attached to the community the military provided me,” he said. “PTSD is often cited for veterans having a hard time transitioning, but I think it has more to do with a deep emotional sense of purpose that gets flipped off like a light switch. We don’t realize how much of that void the mission is filling.”

Over time, Kauffman said more nonprofits have been created and are doing a good job helping veterans in the way his company did. The veteran unemployment rate has also declined dramatically, from about 23 percent to less than 4 percent, he said. These days, Exbellum is doing more consulting than recruiting.

That blue bottleAt Desert Door, Kauffman handles most of the sales and marketing. Campbell manages the business and financials, and Looby does more of the day-to-day operations and production at the distillery and tasting room in Driftwood. The tasting room was important because the men wanted to educate the public on sotol and its history.

“We want it to be a transportive experience,” Looby said of the tasting room, decorated in modern west Texas style that recalls visits to arts-driven Marfa. The tasting room presents primarily in browns and tans, with bold patterned throw pillows, wooden barstools and a matching bar top.

“When you’re sipping on Desert Door, everything that is this brand, across all functions of this business, is all in direct support of that little blue bottle,” Looby said. “So, when you’re here, as sipping on it and tasting, we want this to be reminiscent of a west Texas experience.”

All their plants are harvested in the wild in west Texas near the town of Iraan. They leave the root structure intact, and are looking to get U.S Department of Agriculture grants to see what this technique means for the sustainability and regrowth of the plant, Looby said.

“If more people become consumers of our product instead of a product that uses very heavily watered and fertilized farmland, it’s a better use of Earth’s resources this way,” he said.

While the process is heavily guarded for proprietary reasons, Desert Door sotol calls for only three ingredients: wild sotol, yeast and purified natural Texas water. It’s sold in two varieties: clear, which retails at $55 a bottle and is best for cocktails; and a brown liquor aged in white oak barrels for sipping, which will be available later this year for market price and already has a long waiting list. The taste is herbaceous with a little smoke, and a hint of floral mint and sweetness. The clear version can sub easily in a cocktail meant for tequila, vodka or gin. Looby said the aged version makes a fantastic old-fashioned, replacing its bourbon.

‘Just dive in’It’s been rewarding to meet veterans who come out to the tasting room, Campbell said.

One day shortly after opening, Kauffman recalled, a young man came into the tasting room and hung out until the end of the night. When business died down, he approached Kauffman to tell him he was in the military and debating whether to re-enlist.

“He said, ‘I’m inspired and encouraged by your success here. It’s given me a lot of reason to believe I can go and do whatever I want,’ ” Kauffman said. “That was neat. He was really touched by this whole thing.”

This, he said, brings him back to what he sees in the transitioning Special Forces guys he met through Exbellum — the moment they realize the military has given them the skills they need to go into any civilian career.

“If you’re thoughtful and paying attention, you can apply what you’ve been taught to virtually anything,” he said. “Once they commit to something, they tend to outperform their peers who didn’t serve in the military.

“I think that’s because of the training the military put in them. Where guys and gals may falter or feel unequal is when they’re at the bottom of mountain looking up thinking, ‘I don’t know anything about alcohol industry.’ I encourage them to take that leap and get into it. Just dive in and get to work.”