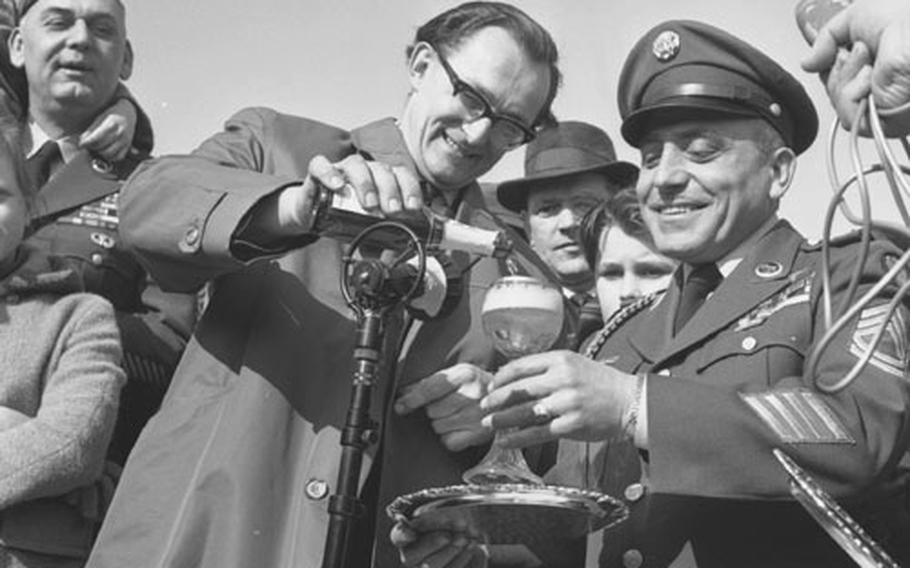 At a reunion 17 years after the battle for the bridge at Remagen, ex-German army sergeant Gerhard Rothe pours a drink of cognac for U.S. Army Sfc. Joseph A. DeLisio. (Norm Zeisloft/Stars and Stripes)

At a reunion 17 years after the battle for the bridge at Remagen, ex-German army sergeant Gerhard Rothe pours a drink of cognac for U.S. Army Sfc. Joseph A. DeLisio. (Norm Zeisloft/Stars and Stripes) 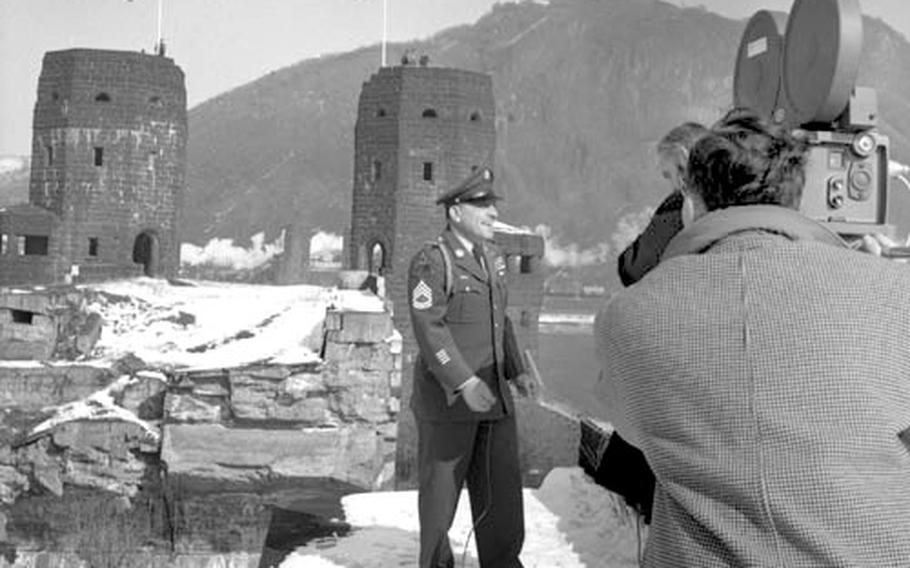 Standing on the ruined approach to the bridge, Sfc. Joseph A. DeLisio describes the battle. (Norm Zeisloft/Stars and Stripes) 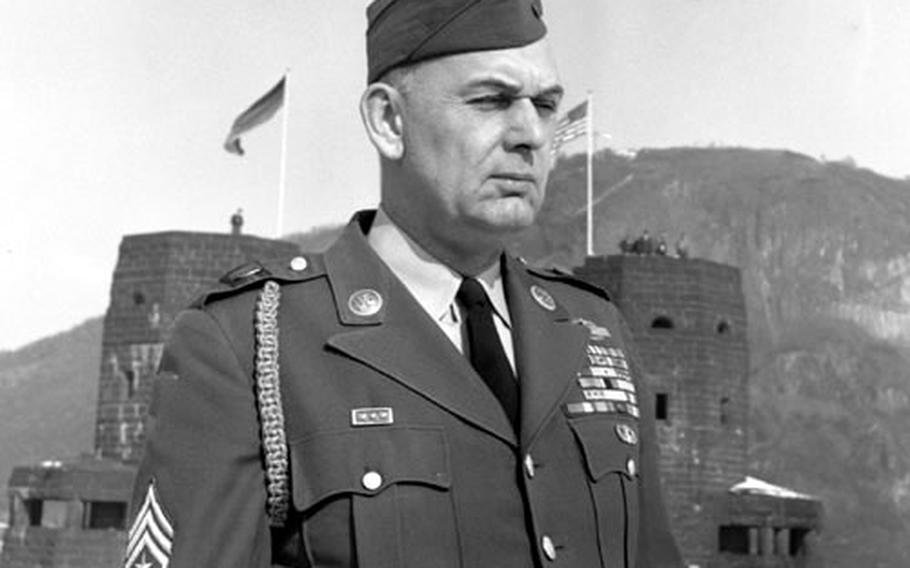 Sgt. Maj. John W. Himes, who was a combat photographer during the battle, stands in front of the ruins in 1962. (Norm Zeisloft/Stars and Stripes) The Ludendorff Bridge in 1962. (Norm Zeisloft/Stars and Stripes)

REMAGEN, Germany (S&S) — One of the first Americans to rush over and several of the last Germans to retreat across the famed Remagen bridge in 1945 were reunited amid jokes, laughter and some sadness Wednesday.

Following the reunion of the combat veterans, ceremonies were held in this small Rhine town commemorating the Americans' surprise capture of the Ludendorff railroad bridge on March 7, 1945. Principals in the gathering at the Central Hotel here are American Sfc Joseph A. DeLisio, and former German army captain Willi Bratge, now a schoolteacher, and former sergeant Gerhard Rothe, a Remagen hotel owner.

Bratge and Rothe were among the defenders of the bridge and DeLisio was a member of Combat Comd B of the 9th Armd Div, U.S. 1st Army.

On the afternoon of March 7, 1945, hundreds of Allied units were racing toward the Rhine. They were not to cross it that day but merely take positions on the western bank for a grand assault later on.

But something that then Gen Dwight D. Eisenhower called a "military windfall" and which German Gen Albert Kesselring called a "catastrophe" came their way — the old Ludendorff railway bridge. The retreating Germans heavily damaged but failed to destroy the bridge and more than 25,000 U.S. combat troops with tanks and artillery crossed it before it collapsed 10 days later.

At Wednesday's ceremonies DeLisio, Bratge and Rothe described the tense day on March 7 when the bridge was taken. DeLisio gave a silver serving tray to his two former enemies to commemorate the 17th anniversary of the bridge's capture.

Rothe had a drink of cognac brought to DeLisio and the two joked for a minute. Then Rothe's voice went serious.

"You know, for me it was very bad," he said. "I was wounded and I was crawling over that bridge. I thought I would be killed."

"You were thinking the same thing I was thinking," replied DeLisio, "about living. All I wanted to do was get off that bridge."

The town of Remagen responded wholeheartedly to the reunion with American flags decking the central plaza.

Brown was an ammunition bearer with Co A, 47th Inf, 9th Armd Div at the time the bridge was crossed.

At the ceremonies invocation was given by Rev. Dr. Johann Peters, the Catholic priest at Remagen, who said "This bridge of steel and iron has been destroyed. Let us hope our bridge of friendship does not meet a similar fate." American Protestant Chaplain (Maj) Arthur Mills said "When men call men friend, peace prevails."

The ceremony was held on a snow-covered approach to the bridge with about 400 townspeople and students in attendance.