Veterans of an earlier Afghan War: 'You have a brotherhood' 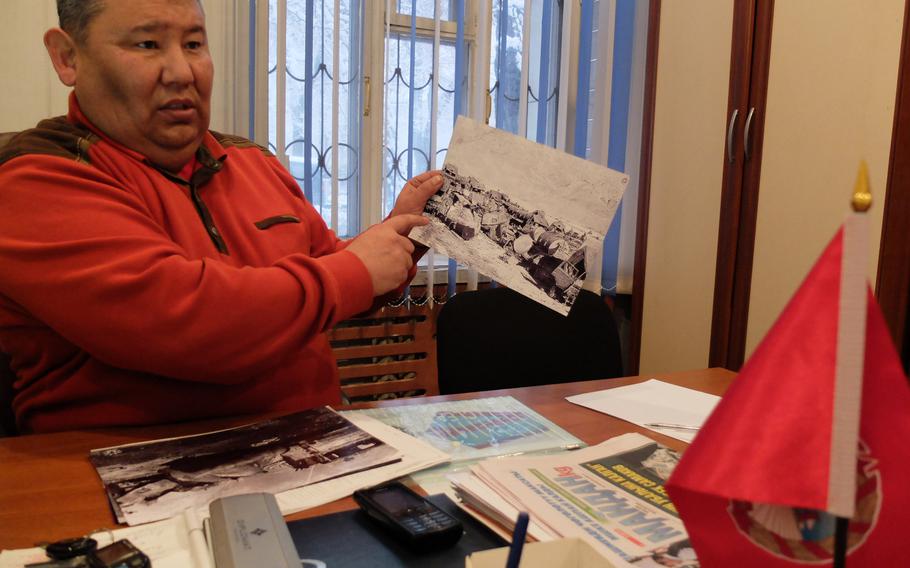 Tinibek Kadirov, general director of the Republican Council of Veterans of the War in Afghanistan, describes an attack on a Soviet supply convoy that he survived. Kadirov and other soldiers from Kyrgyzstan, then a Soviet republic, fought in Afghanistan before the Taliban rose to power and the United States invaded. (Josh Smith/Stars and Stripes)

Tinibek Kadirov, general director of the Republican Council of Veterans of the War in Afghanistan, describes an attack on a Soviet supply convoy that he survived. Kadirov and other soldiers from Kyrgyzstan, then a Soviet republic, fought in Afghanistan before the Taliban rose to power and the United States invaded. (Josh Smith/Stars and Stripes) 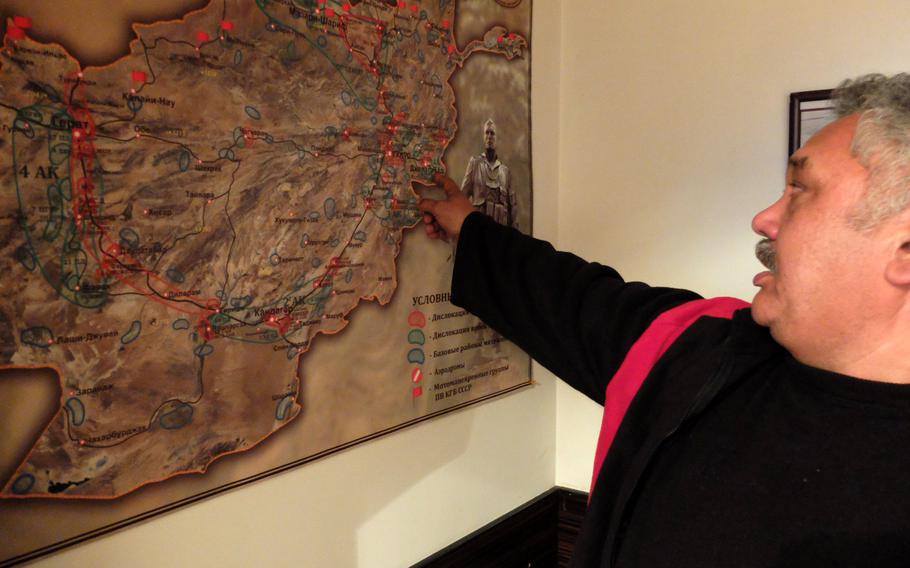 Hidar Dyikanbaev, a native of Kyrgyzstan, points out where he served near Kabul during the Soviet Union's war in Afghanistan. Despite the high losses sustained by Soviet forces and the chaos that followed their withdrawal, Dyikanbaev says he has no second thoughts about serving in the war. (Josh Smith/Stars and Stripes) 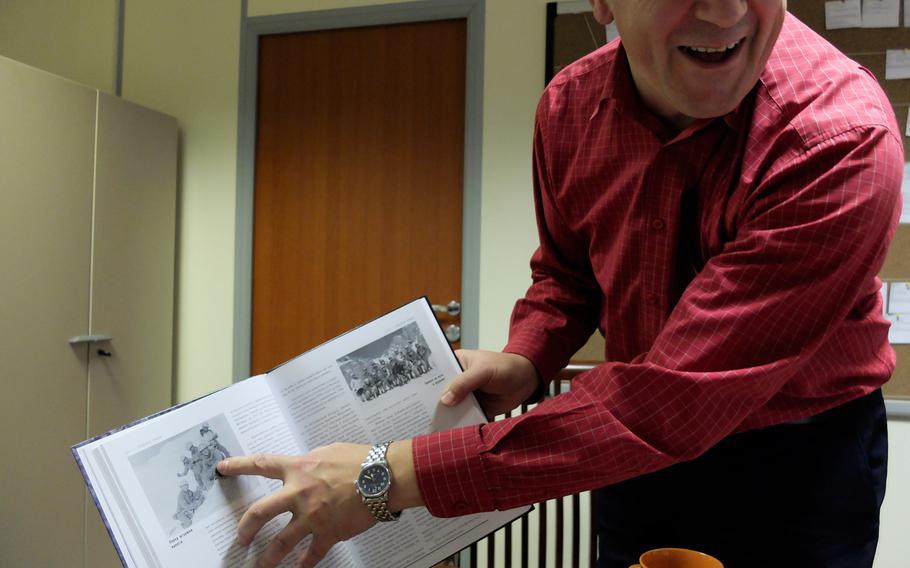 At his office in Moscow, Anatoly Ermolin laughs as he points to a photo of himself during his service with the Soviet special forces unit Vympel. At the end of the Soviet Union's war in Afghanistan, Ermolin and his unit fought to keep the routes out of the country secure for departing troops. (Josh Smith/Stars and Stripes) 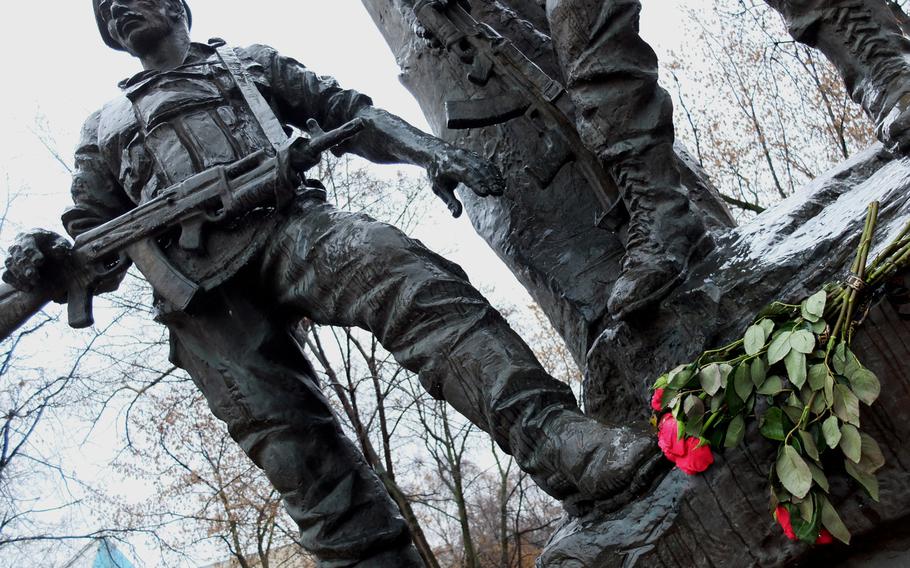 A memorial to the soldiers who fought and died during the Soviet Union's nearly decade-long war in Afghanistan. The monument stands outside Moscow's Central Armed Forces Museum. (Josh Smith/Stars and Stripes) 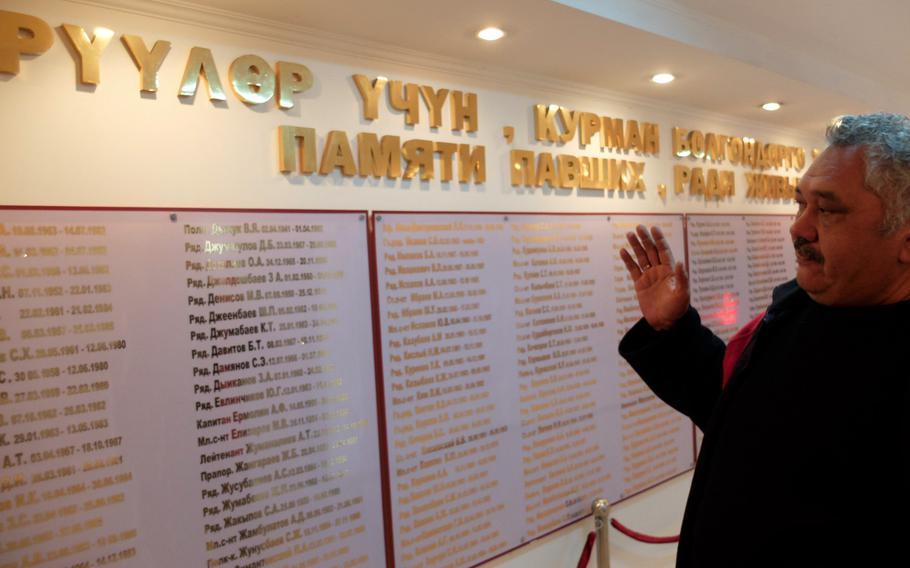 Soviet army veteran Hidar Dyikanbaev points out a wall with the names of fellow soldiers from Kyrgyzstan who died fighting for the Soviet Union in Afghanistan. The wall is located at the headquarters of Kyryzstan's council for veterans of the Afghan War. (Josh Smith/Stars and Stripes) 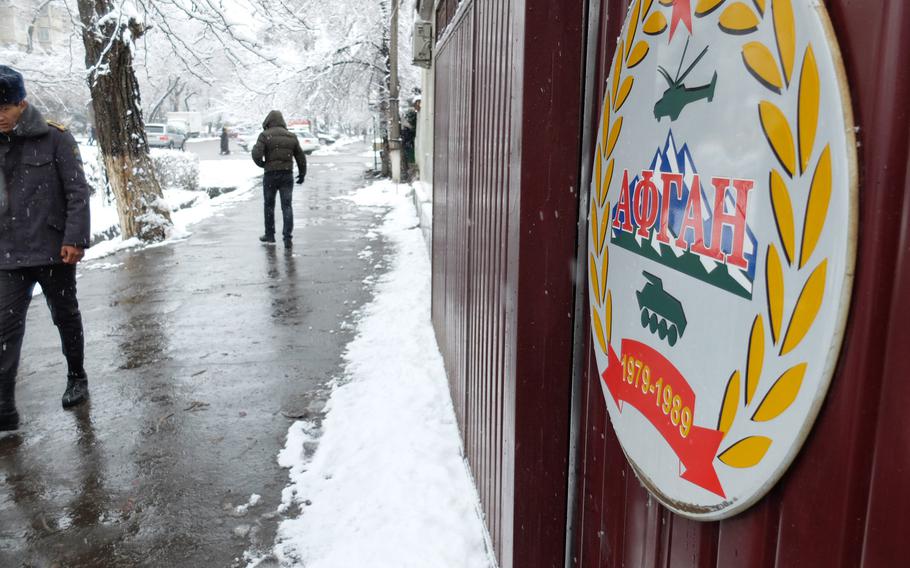 Outside the headquarters of the Council of Veterans of the Afghan War in Bishkek, the capital of Kyrgyzstan. More than 7,000 Kyrgyz veterans fought in the Soviet Union's war in Afghanistan. (Josh Smith/Stars and Stripes) 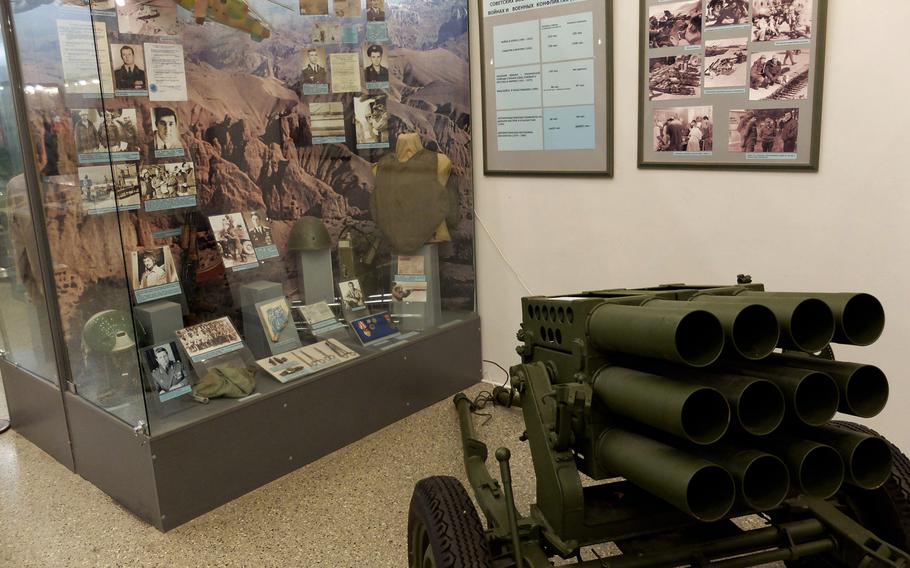 A display in Moscow's Central Armed Forces Museum commemorates the Soviet Union's war in Afghanistan. Nearly 15,000 Soviet troops and more than a million Afghan civilians and insurgent fighters are estimated to have been killed in the 10-year war. (Josh Smith/Stars and Stripes)

BISHKEK, Kyrgyzstan — On a dark night in 1986, the sky above the mountain plains of Soviet-occupied eastern Afghanistan lit up. Forty fuel tankers went up in flames as mujahedeen fighters poured automatic gunfire and rocket-propelled grenades into a Red Army supply convoy stretched along a road north of Kabul.

Manning a nearby outpost of soldiers a few miles from the air base at Bagram, Tinibek Kadirov ran to pull drivers from their burning vehicles. Two of those men turned out to be from Kadirov’s native Kyrgyzstan, then a republic in the Soviet Union.

Nearly 30 years later, Kadirov is helping his fellow Kyrgyz veterans as head of the Council of Veterans of the Afghan War. He recalls his ambivalence about going into battle back then.

“I didn’t really want (to serve) because we knew there was a war going on and the probability of dying was very high, but I got an order,” he said, speaking with Stars and Stripes in his office in Bishkek, the Kyrgyz capital.

At the time, Washington and Moscow were on opposite sides of the conflict. But today, as the United States is ending its own decade-long intervention in Afghanistan, Kadirov and other veterans of the Soviet-Afghan war see what unites them and American servicemembers.

“For those people who fight — it makes no difference whether you are Russian or Kyrgyz or American — it is important to have people who understand you by your side,” said Hidar Dyikanbaev, another Kyrgyz veteran, who served in Kabul from 1981 to 1983.

In 1979, the USSR invaded Afghanistan with more than 80,000 troops, fearing that the possible collapse of the government it supported would lead to instability on the Soviet border.

About half a million soldiers served there before the war was through, and 15,000 died.

The brutal tactics employed by the Soviets and their local Afghan allies led to the death of more than a million Afghan civilians and insurgent fighters.

Worried about a communist expansion, the U.S. and its allies in the region covertly shoveled billions of dollars into Afghanistan to train and arm the mujahedeen, who fought the Soviet-backed Afghan government.

American support for the militants still rankles Soviet veterans of that war, but they say despite the politics, they understand the young American servicemembers whose lives have been defined by the conflict.

“We are all soldiers,” Dyikanbaev said.

He pointed out a wall at the veterans council’s headquarters with the names of the more than 300 Kyrgyz soldiers killed in Afghanistan. “I took an oath, I did my duty.”

Like many soldiers in any era, Dyikanbaev said a part of him was excited about being deployed.

“I wanted to see the war and test myself,” he said. “In those days we did not have a lot of information beforehand about what was going on in Afghanistan, and it wasn’t until we arrived that we realized that we might be in trouble. It was a little scary, and of course I had some thoughts that I would not return home, but I adjusted.”

Famed Russian war journalist Artyom Borovik wrote that in many ways the war in Afghanistan claimed the lives of those who survived as well as those who died.

“We thought that we were civilizing a backwards country by exposing it to television, to modern bombers, to schools …,” he wrote in “The Hidden War,” published in 1990, just after the Soviet withdrawal. “But we rarely stopped to think how Afghanistan would influence us. Afghanistan became part of each person who fought there. And each of the half million soldiers who went through this war became part of Afghanistan — part of the land that could never absorb all the blood spilled on it.”

The war neared its end as the USSR teetered on the brink of collapse.

Anatoly Ermolin, a former KGB special forces soldier who lives in Moscow, told Stars and Stripes he immediately understood how “silly” it was to be fighting and dying in Afghanistan.

As the war was winding down in early 1989, he was tasked with patrolling the deserts to keep the roads open for retreating Soviet troops.

“Of course, we had nothing to do there,” he said. “They said it was to help our Afghanistan brothers build socialism. It was crazy. They were a feudal people with a very uneducated population, and we were trying all this industrial development. It’s another culture, it’s another understanding of the world.”

For the Soviet Union, Afghanistan became the equivalent of the American war in Vietnam, as veterans returned to a country disillusioned by the failure of the intervention and the political decisions that led to the debacle.

“The society of ‘progressive socialism’ scorned and violated one of the first laws of nature: Sacrifice your own life, but save your offspring,” Borovik wrote. “It watched obediently as an entire generation of 18-year-olds perished in the Afghan bloodbath, together with the Afghans themselves.”

Today the reasons for the American intervention in Afghanistan — seemingly so clear in the first days after the terrorist attacks of Sept. 11, 2001 — have become muddled. More than 10 years since the U.S. and its allies invaded the country with the aim of destroying al-Qaida and its Taliban host, an unrelenting insurgency continues to claim lives, and the U.S.-backed government is taking increasingly anti-American positions.

As most American troops prepare to depart the country by the end of the year, opinion polls in the U.S. show support for the war has dropped to near record lows.

The most important thing for troops coping with the return, according to Dyikanbaev, is to share and solve problems collectively.

“You have a brotherhood,” he said. “Try to support each other and speak out because you understand each other in ways that others may not.”

For Ermolin, staying true to himself and remembering his responsibilities was key to his transition home.

“Be good soldiers, and be good people,” he said. “That is the main thing to remember.”