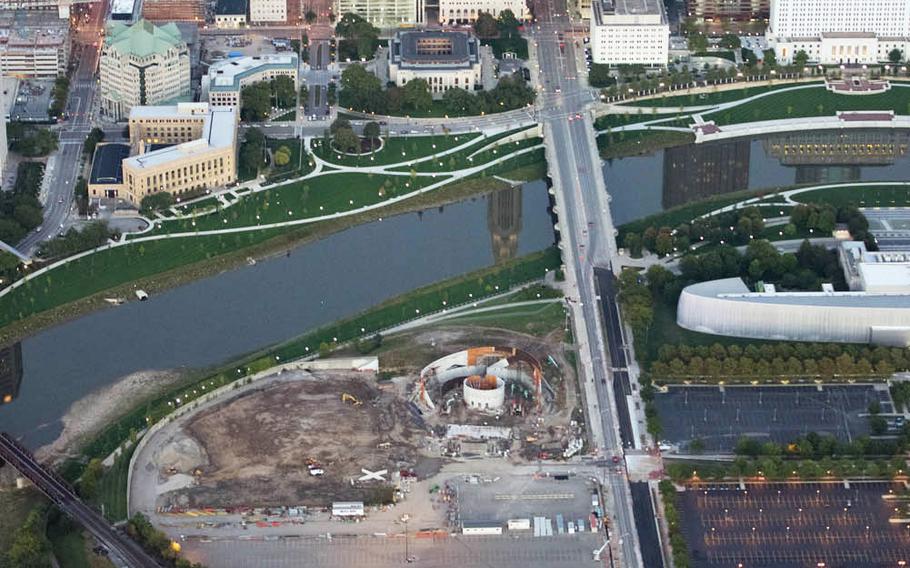 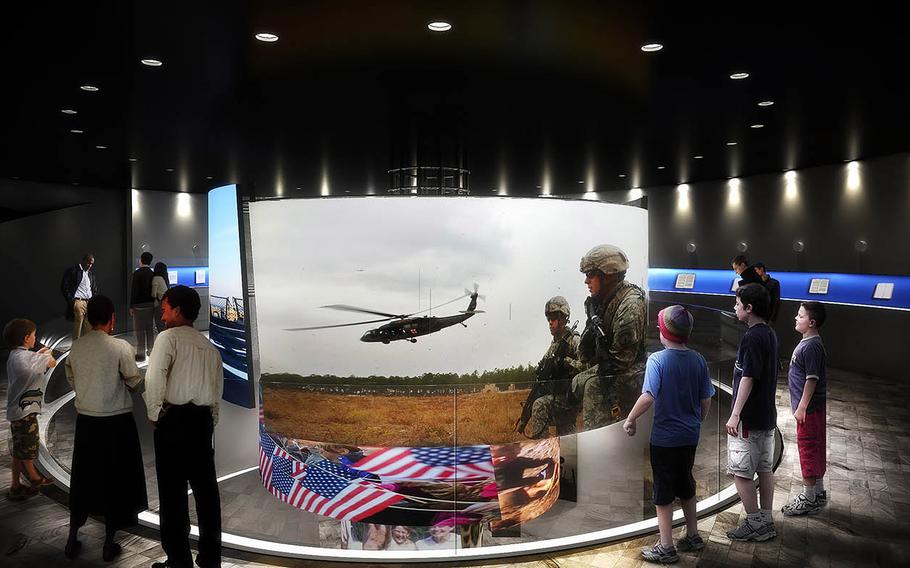 A 3D film will play in the center of the museum, surrounded by an exhibit of letters from servicemembers to their families. (Ralph Appelbaum Associates) 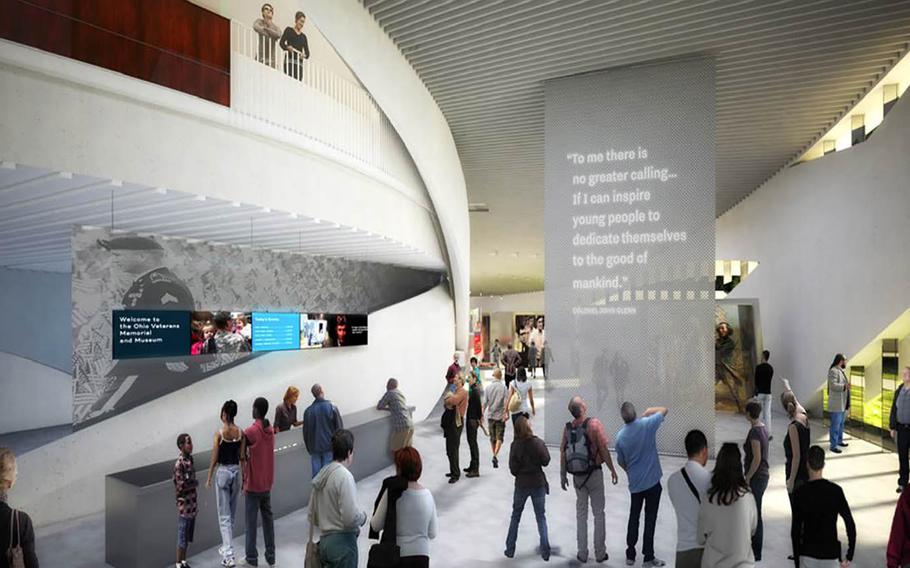 The museum will contain stories from individual veterans, including details of their service and their challenges and achievements after. This rendering shows a quote near the museum's entrance from John Glenn, a World War II veteran, astronaut and former U.S. senator who was behind the effort to create the museum. (Ralph Appelbaum Associates) 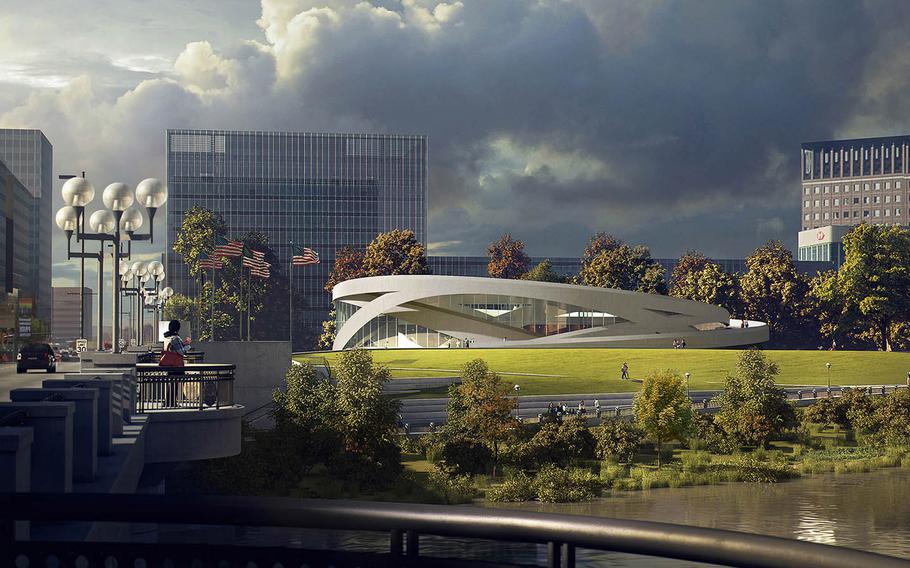 The National Veterans Memorial and Museum is an approximately $75 million facility being constructed in downtown Columbus, Ohio. With congressional approval, the museum would become the first national museum dedicated to veterans. This rendering shows the building and its seven-acre site from across the Scioto River. (Allied Works Architecture) 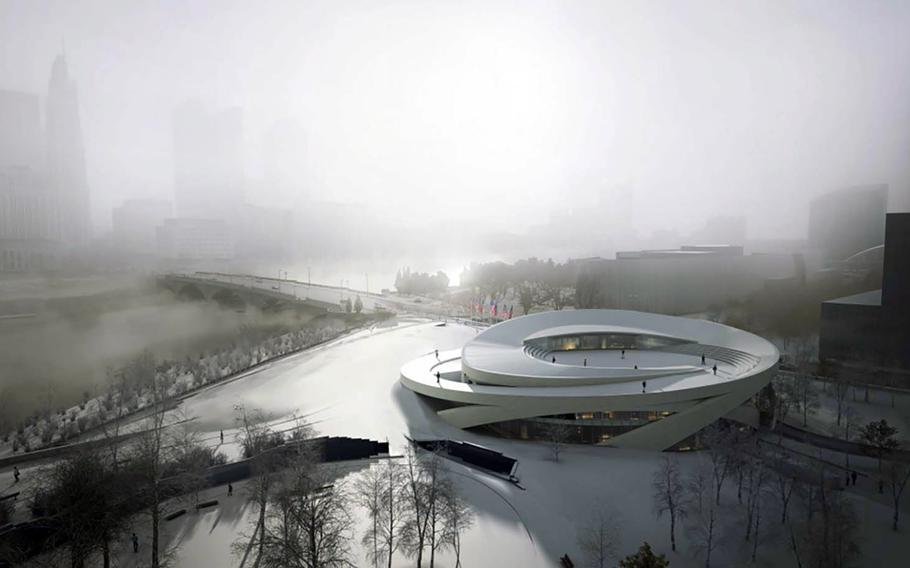 The National Veterans Memorial and Museum, under construction in downtown Columbus, Ohio, will feature personal stories of veterans, including their military service and their lives after. This rendering, facing east toward the Scioto River, shows the museum with a planned rooftop "sanctuary." (Allied Works Architecture)

WASHINGTON – A soldier’s lucky number 7 playing card that he carried through Desert Storm until returning home is one of the items considered for a new museum dedicated to veterans.

The museum is under construction in downtown Columbus, Ohio, and will focus on the military service of veterans, as well as their struggles and achievements after they returned home, said Amy Taylor, chief operating officer of the Columbus Downtown Development Corporation, the project developer.

With congressional approval, the facility would be designated as a national site – the first dedicated to the veteran experience.

“This is all about people,” Taylor said. “There are no big tanks or fighter planes. This is a story of people and experiences through service and after service.”

The museum, dubbed the National Veterans Memorial and Museum, was planned in 2013 as a place to honor the 900,000 veterans living in Ohio.

“Many people were telling us they weren’t really from Ohio, and we realized there was a much bigger story to tell,” Laich said. “We realized we could have a much richer fabric if we broaden the scope of the stories.”

In September, Ohio’s congressional delegation introduced bipartisan legislation in the Senate and House to designate the museum as a national facility.

“We had a great project, it was just bigger than what we thought,” Taylor said. “We realized there was no national veterans memorial. We had all assumed there was one. And rather than limit ourselves and narrow this really important topic, we decided to expand it.”

Now that organizers in Columbus are taking a nationwide approach to the museum, they’re reaching out to some of the 22 million veterans across the country to gather more stories. They’re also looking to the federal government for funding.

The project, estimated at approximately $75 million, has garnered about $60 million in private donations and contributions from the state of Ohio and Franklin County, Ohio.

The plot along the Scioto River planned for the museum has gone through a redevelopment, Taylor said. A 60-year-old memorial dedicated to veterans in Franklin County, Ohio stood at the site before it was demolished in early 2015.

Filling the new museum, which is expected to open in the summer of 2018, will be letters from servicemembers to their families, a timeline of major military events and films showing stories of veterans.

Plans for the museum and memorial were initiated, in part, by former U.S. senator from Ohio and astronaut John Glenn, who is a World War II veteran.

“When we ponder the accomplishments veterans have done throughout the country, some of them are huge – John Glenn was a veteran, that’s a great story,” retired Air Force Col. Tom Moe said. “But we also have those veterans who day to day go out and serve in their communities.”

So far, organizers have been mostly focused on Ohio veterans. Moe, the former director of the Ohio Department of Veterans Services under Gov. John Kasich, is leading an effort to extend past the state’s borders.

He has contacted major veterans service organizations, such as the American Legion, collecting ideas for exhibits.

“Nothing like this has been done. Everyone is saying, ‘Wow, it’s about time,’” Moe said. “We want to focus the story here about the service of veterans, whether they be from Tallahassee to Anchorage, and also be a place where vets can call a home.”

One thing many veterans have agreed on, Moe said, is the museum incorporate space to honor people who were killed in action in conflicts over time. Current plans for the museum include a “remembrance room” and an outdoor memorial.

Moe, who spent five years in a prisoner of war camp in North Vietnam, said he was able to return home and raise his family, an opportunity many servicemembers alongside him didn’t have.

AT A GLANCE: The building: 50,000-square-foot facility made of glass walls and white, concrete arches leading to a rooftop sanctuary

Site: seven acres, including a memorial grove, along the Scioto River in downtown Columbus, Ohio

Exhibits: stories from individual veterans, letters from servicemembers, a 3-D film playing in the center of the museum, a room dedicated to servicemembers killed in action and a timeline of major events and people in U.S. military history