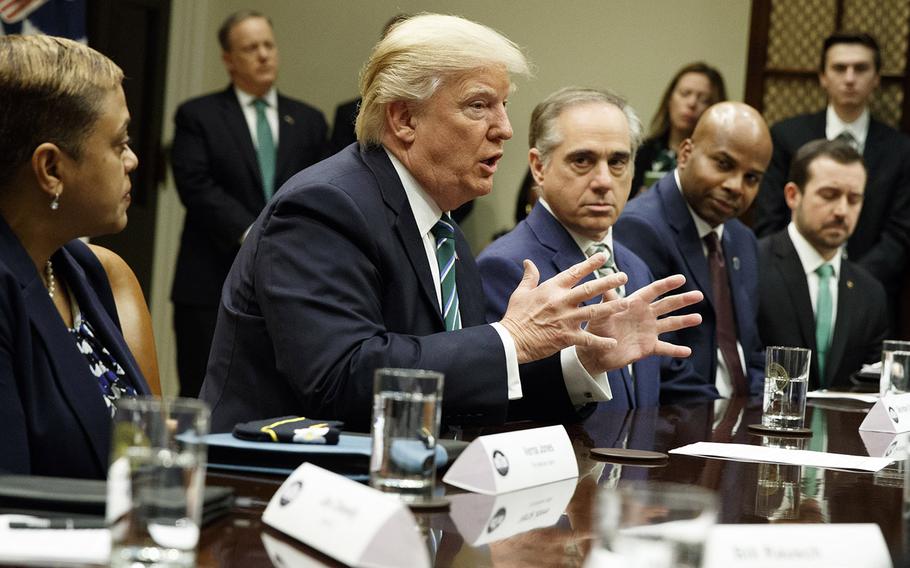 Veterans groups have worked for months to secure the meeting with Trump, who had made veterans issues a major part of presidential campaign. Several of the veterans who attended the listening session with Trump described the meeting as “positive” and “conversational.”

“He was really into the conversation, and his staff promised more conversations. They seemed dedicated to that,” said Joe Chenelly, director of American Veterans. “We’ll take the president at his word when he says this is just the beginning of working together as partners and reforming the [Department of Veterans Affairs], particularly the health care issues.”

Paul Rieckhoff, director of Iraq and Afghanistan Veterans of America, took to Twitter on Friday, saying he was disappointed the White House denied IAVA’s request to attend.

“We’re hoping this is one of many,” Jones said of the meeting with the president.

During the meeting, Trump refuted claims he would privatize the VA, Jones said, reiterating a message Shulkin and key Republican lawmakers have conveyed in recent months.

“He assured us the VA is here to stay, that they’re not going to privatize it – veterans will have a healthy VA,” Jones said.

Some groups have expressed concerns that veterans’ health care would move too far into the private sector and remove services from the VA, which they see as providing care uniquely fit for veterans.

Rausch said there was “a clear consensus for support of the veteran community through a strong VA” during the meeting.

The members from each group took turns talking to Trump about their priorities. Some of them spoke about the Veterans Choice Program, which veterans use to receive care in the private sector when they can’t get an appointment at a VA facility. The program, which has been criticized as complex and confusing, is in flux. It will expire in August without action from Congress, and Shulkin is working on an improved version that he promises will have “less red tape.”

Chenelly told Trump that the choice program should continue, but the VA should better inform veterans about their options when deciding where to seek health care.

Rausch proposed Trump sign an executive order establishing a new office in the White House dedicated to veteran empowerment. Trump was receptive to the idea, Rausch said, and asked Pence to follow up.

Others told Trump about the need to modernize the process that veterans use to claim disability and pension compensation and the need for more benefits to caregivers of veterans injured pre-9/11, Jones and Chenelly said. They also asked for more details about an announcement that Shulkin made last week that he would expand urgent mental health care for veterans with other-than-honorable discharges.

“There was not a lot of response from them, but I saw that as our chance to have our voices heard,” Chenelly said.

In statements before the meeting, Shulkin thanked Trump for the budget that he proposed Thursday for the VA, which includes a $4.4 billion increase from 2017.

“I think you’re upholding your commitment to showing that this country cares about the veterans, and you’ve given us the ability to make sure that we are able to care for them,” Shulkin told Trump.

Shulkin also thanked the Republican-led House for passing legislation Thursday that would allow him to quickly fire, demote and suspend VA employees. That bill now will now go to the Senate, but there’s no clear timeline of when senators will consider it.

Mark Lucas, executive director of Concerned Veterans for America, said he urged Trump during the meeting to talk to Senate Majority Leader Mitch McConnell, R-Ky., about expediting a vote on the bill.

Trump said he’s heard “horrible stories” about the VA but “already a lot of improvements are being made.”

He said he was forming a VA board that will be comprised of businessmen and medical professionals. Isaac “Ike” Perlmutter, CEO of Marvel Entertainment, is part of that board, Trump said, though he did not say who else will take part. The president also announced a “major” meeting about the VA scheduled for Friday night at his Mar-a-Lago estate.

Sen. Jon Tester, D-Mont., has been critical of Trump for not meeting with veterans groups. He said Friday that the listening session was a “step in the right direction.”

“Moving forward, I am hopeful the administration will better engage with key veterans’ advocates to ensure they have a seat at the table in shaping policies,” he said in a statement.