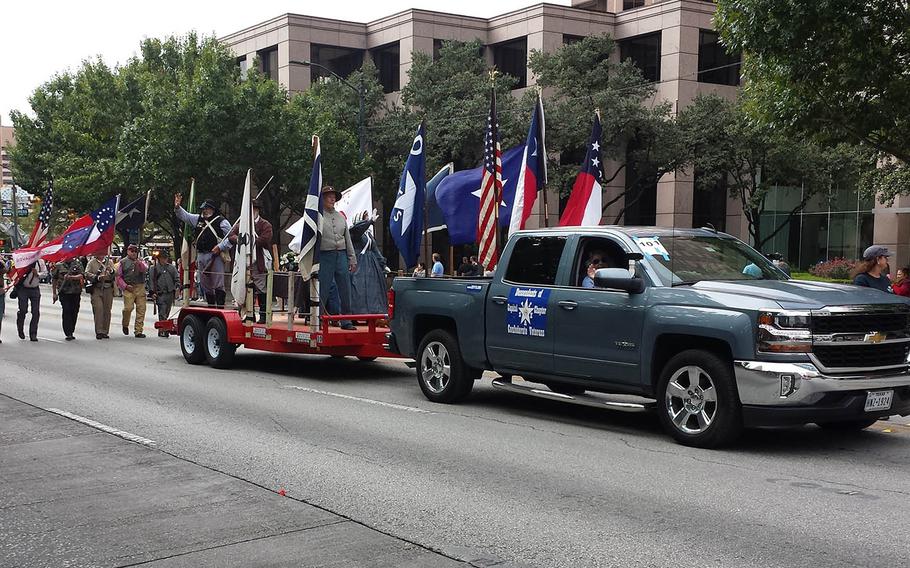 AUSTIN, Texas – The Confederate flag is once again dividing a southern community.

Veterans in Austin now find themselves in a precarious position: whether to allow the Confederate flag and the groups that want to carry it to march in the city’s annual Veterans Day Parade.

“If you were a Confederate soldier, you actively killed U.S. soldiers. The U.S military defends the U.S. Constitution. Confederate soldiers took the oath of the Confederate States of America and lost their citizenship,” said Manuel Jimenez, Air Force veteran and a co-founder of ATXVets, a local veterans advocacy group leading the call for organizations that honor Confederate veterans to be excluded from the parade. “To me, it’s a slap in the face that you actively went to war with the United States of America and killed our military personnel and want to be back included in everything like nothing happened.”

Across the nation, communities have grappled with what to do about Confederate statues, memorials and streets named in honor of the men who fought for the southern states during the Civil War.

The controversy in Austin has been percolating below the surface for years – gaining greater public attention last year when Mayor Steve Adler boycotted the parade, priming the battle this year.

ATXVets asked in July for the Austin Veterans Day Parade Committee, a small group of volunteers that plan the parade with support from local VFW Post 4443, to vote on a policy to block Confederate groups from participating. The committee declined to vote, leaving the decision up to the larger membership of the VFW. Officials at that post did not respond to requests for comment.

But the parade’s fate could be decided Aug. 9 by the Austin City Council when the group is scheduled to vote on a resolution to waive the cost for services the city provides for the parade. Councilmember Sabino “Pio” Renteria has said he will not support the city’s fee waiver if Confederate flags are allowed.

Renteria, Adler and two other council members sponsored a resolution “expressing council’s desire that city resources, including fee waivers, be used only for Veterans Day events and parades that only honor those who have served in the United States of America’s Armed Forces.”

Without the city waiving $21,000 in fees for police support, trash pickup, road closures and emergency services, it’s unclear whether the VFW could afford the parade, which has drawn crowds of about 20,000 people annually on Nov. 11.

Travis County, where Austin is the county seat, managed the parade until four years ago, when officials said they would not continue if Confederate participation was allowed, so the volunteers of the Austin Veterans Day Parade Committee took control of it.

“They know where we stand on it,” said Terry Ayers, a Vietnam War veteran and member of the descendants organization, noting their prior 12 years of participation in the parade and the committee vote as reasons they should remain. “Nothing has changed other than some people have wandered in off street who want it to change. We feel like we shouldn’t have to defend our right every year.”

Days before the 2017 parade, Adler met with Ayers and other members of the Confederate groups to find a compromise. Ayers said the mayor tried to talk them out of participating, but they would only concede not to use the controversial Confederate battle flag. Instead they carried the Confederacy’s first national flag, which somewhat resembles America’s first flag with a circle of stars in a blue box.

“That (battle) flag was co-opted by the [Ku Klux Klan] years after the war. It became a symbol of racism, because the KKK was racist,” Ayers said. “We realize there’s some people we’ll never convince that it can have different meaning for different folks.”

“As the son of a disabled veteran, Veterans Day parades have special importance and meaning for me and I know they are vitally important to my community. I strongly support Veterans Day parades that focus on celebrating those that served in the armed forces of the United States of America,” Adler wrote in an email.

Ayers said he is a veteran, whether he chooses to march with his fellow Navy veterans of the Vietnam War or, as he does each year, with other descendants of Confederate veterans. He wears his Navy service medals as well as his heritage Confederate uniform. Ayers compares this to other historical veterans groups in the parade such as the Sons of the American Revolution donning their tricorn hats.

The six-member volunteer parade committee has received “lots” of feedback supporting both sides of the issue, said Perry Jefferies, public affairs volunteer for the committee.

“We appreciate everyone’s input but are primarily concerned with the operations of the parade and the comfort and security of the participants and those that turn out to honor our veterans,” said Jefferies, an Army veteran.

James Russell, the executive director of Austin’s large holiday event, the Trail of Lights, recently joined the committee to help see them through this controversy and has floated another option. The committee is now exploring what it could mean to transform itself into an independent nonprofit in an effort “to offer continuity and perhaps better community support,” Jefferies said.

But it remains unclear how forming a nonprofit might help resolve the Confederate flag controversy.

Veterans Day is celebrated Nov. 11 and began in 1954, when former President Dwight D. Eisenhower signed legislation that changed Armistice Day, which celebrated the end of World War I, to Veterans Day, to include veterans of wars since then. The man who initially thought to expand the holiday, Raymond Weeks, was a World War II veteran from Birmingham, Ala., where one of the largest Veterans Day parades is held each year.

This parade draws national attention with spectator crowds sometimes as large as 120,000 and about 5,000 participants, said Mark Ryan, president of the local Veterans Day foundation, a volunteer organization that runs the parade.

While they don’t have a specific policy against the use of the Confederate flag, they have declined its use in past parades. A couple years ago, a group asked to bring a Civil War-era cannon and fly a Confederate flag with it. The foundation approved the cannon but declined the flag. The group chose not to march in the parade.

“We want to stay focused on our veterans. There are those that would be offended by that and that’s not what we’re about,” Ryan said, adding they also don’t have any Confederate organizations that participate annually. “That was a time when our nation was divided. We want to focus on a nation that was unified.”

Austin and Birmingham are not the only cities that have dealt with the Confederate flag controversy.

The Knoxville, Tenn., parade committee chose to ban the Confederate flag back in 2008, said Marty Everett, a parade organizer for the past 13 years.

“It’s a damn issue every year,” he said.

The event is sponsored by a local American Legion and draws more than 3,000 participants and about 40,000 attendees.

“People said I’m trying to be politically correct. Yeah, that’s exactly what I’m trying to do,” said the Air Force veteran. “We don’t feel that that flag is appropriate. ... Our position is that flag has been adopted by neo-Nazis and the KKK. If you ask Jews, Catholics, anybody, they’ll say the rebel flag is a hate flag. The parade is about honoring veterans of the U.S. armed forces. Anybody that detracts from that, we don’t allow.”

As for Confederate flags at the Austin parade, Jefferies said the committee will continue to focus on their top priority “to prepare for a great parade to honor the many veterans of Austin, Travis County, and the surrounding area, especially on this 100th anniversary of World War I.”