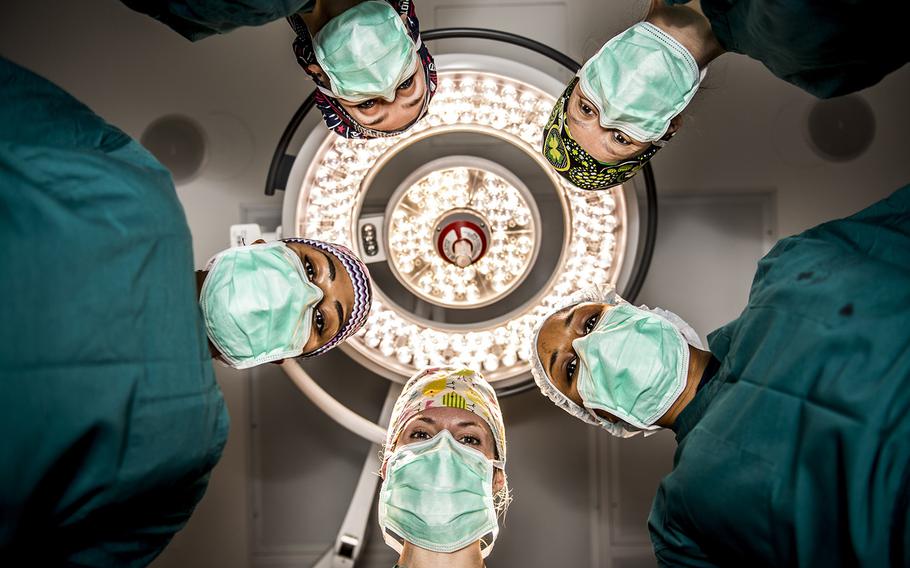 Surgeons of the Belvoir Hospital at Fort Belvoir, Va., pose for a photo on April 12, 2017. The House Committee on Veterans’ Affairs on Wednesday, Nov. 7, 2017, will consider a bill to overhaul the Veterans Choice Program and implement new rules about when and where veterans can seek health care in the private sector. (Reese Brown/Department of Defense)

WASHINGTON — Lawmakers and stakeholders were grappling Tuesday with details of legislation that focus on a big question in veterans’ health care – whether the government or the veteran should have final say about where medical treatment is provided.

After months of discussion, the House Committee on Veterans’ Affairs on Wednesday will consider a bill to overhaul the Veterans Choice Program and implement new rules about when and where veterans can seek health care in the private sector. The debate has been a tug-of-war between groups that want more choice for veterans and others who see the bill as a step toward privatization of veterans’ health care.

On Tuesday, lawmakers and major veterans organizations were still trying to find common ground on some wording of the 64-page document called the VA Care in the Community Act.

“We are at odds right now,” said Joe Chenelly, executive director for AMVETS. “But we offered some new language. If it is accepted… [we] will support.”

The bill was introduced Friday and cosponsored by all 23 members of the House committee.

It would effectively end Choice, a temporary program created in 2014 following the Department of Veterans Affairs wait-time scandal. The program was designed to send veterans to private doctors and alleviate problems with their access to health care. Since its beginning, the program has been described by veterans, lawmakers and VA officials as complex and bureaucratic.

The new bill would do away with a controversial rule that allows veterans to seek private-sector care only if they can’t get an appointment within 30 days or if they live more than 40 miles driving distance from a VA facility. Instead, the legislation leaves the decision to veterans and their VA doctors.

Stakeholders generally agree it’s a good idea, but there’s dispute over its details.

The House bill would allow veterans to seek private-sector medical care if the VA determines it couldn’t provide them a health care team. Veterans would be able to get treatment through a network of private-sector providers that would be established in each VA region.

When deciding whether a veteran can receive medical treatment in the private sector, the VA would also be asked to consider whether they face an “excessive burden” in accessing a VA facility. An excessive burden could mean a veteran lives too far from a facility, or there are poor road conditions, hazardous weather or a veteran is unable to travel because of a medical condition, the legislation states.

After the discussion last week, lawmakers added in another exception – that veterans can go outside the VA system if they “reasonably believe” they have a poor relationship with their VA doctor. Chenelly argued the measure would allow too much leeway for veterans to leave the VA. Many major veterans organizations have raised concerns in the past about veterans’ health care sliding too far into the private sector and creating huge costs that would come at a detriment to the VA.

A cost estimate for the new bill was not available as of Tuesday.

As of Tuesday afternoon, only one veterans organization – the American Legion – publicly issued its support for the bill.

“This bill, as currently written, would transform the Veterans Affairs Choice Program into a new community care system that will provide better services and health care to our nations’ veterans,” Legion National Commander Denise Rohan wrote in a letter to the committee. “[It] will allow the department to provide greater access and develop stronger relationships with non-VA providers, ultimately moving toward a more integrated system with the veteran at the core.”

Carlos Fuentes, a director for the Veterans of Foreign Wars, described the legislation Tuesday as “not perfect” but said it “put veterans’ interests first.” He urged the committee to complete and approve the bill as soon as possible.

Partisan groups are also engaged in the debate. The conservative Concerned Veterans for America – part of the Koch brothers’ political network -- is calling on lawmakers to create a bill that would give veterans complete choice to go into the private sector. Dan Caldwell, the group’s executive director, said on Fox News Sunday that the committee’s bill was “not real choice.”

“It doesn’t go far enough in offering the real choice veterans need and that President [Donald] Trump campaigned on,” Caldwell said. “I think members of the House VA committee, particularly on the Republican side, their hearts are in the right place, and they want to do the right thing. But they’re getting a lot of pressure from special interests here who want to maintain the status quo. I really hope they move the bill in a better direction.”

Sixteen conservative groups, including others tied to the Koch network, previously sent a letter to Congress advocating for more private-sector care.

On the other side, VoteVets, a liberal veterans advocacy group, has lobbied against any broadening of the VA’s private-sector provider network. The American Federation for Government Employees, a union representing about 230,000 VA workers, described previous versions of the community care plan as a “total dismantling of the VA.”

Lawmakers are facing a deadline. Funding for the Choice program is expected to run out by the end of the year, and – to avert another funding crisis -- Shulkin asked Congress approve a new community care program before its Thanksgiving break starts Nov. 20.

While the House committee prepares to advance a bill to the House floor, the Senate Veterans’ Affairs Committee is working on its own legislation, said Amanda Maddox, spokeswoman for Sen. Johnny Isakson, R-Ga., the chairman of the committee. It’s uncertain when the Senate will publicly discuss a bill.

Curt Cashour, a VA spokesman, said the VA was working closely with the House and Senate VA committees to “resolve some of the differences among various community care proposals.” The VA does not oppose any element of either committee’s bill, he said.