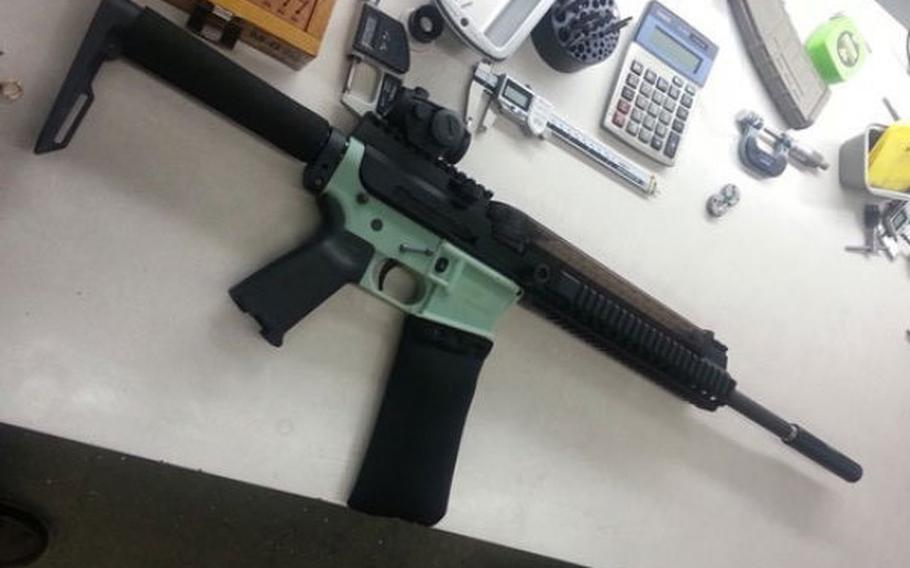 Green lower receiver for the AR-15 was printed by Cody Wilson in November 2012. (Photo courtesy of Cody Wilson)

WASHINGTON — A group of veterans who advise the largest gun control advocacy organization in the United States urged the State Department to halt its plans to allow downloadable designs for 3-D-printed guns to be published online.

The Veterans Advisory Council for Everytown for Gun Safety described the printable, hard-to-trace guns as a threat to national security and public safety. In a letter, 15 veterans on the council called on Secretary of State Mike Pompeo to step in and block blueprints to manufacture the guns from being posted online, which is slated to start Wednesday.

“We know firsthand the destructive power of firearms – and the dangers of firearms in the wrong hands,” the veterans wrote to Pompeo.

In 2013, the State Department stopped the Texas-based company Defense Distributed from publishing gun blueprints, arguing it violated federal export laws because some of them were downloaded outside of the United States.

In late June, the federal government reached a settlement with the company to allow it to resume posting the designs. The settlement allows Defense Distributed to start posting the blueprints online Wednesday, but as of Sunday, 1,000 people had already downloaded the plans for AR-15-style, semi-automatic assault rifles, according to Pennsylvania Attorney General Josh Shapiro.

Pennsylvania was one of eight states to file a lawsuit Monday against President Donald Trump’s administration over its decision to allow distribution of the blueprints. In a separate move, 21 state attorneys general called on Pompeo and U.S. Attorney General Jeff Sessions to back out of their settlement with the company.

On Tuesday, Democrats in the Senate introduced legislation in a last-ditch effort to continue the ban on printable guns. During a news conference at the Capitol, the lawmakers described it as a “deadly mistake” and a “self-inflicted public safety crisis.”

“Coming to a theater near you, coming to a school near you, coming to a sports stadium, to any public place,” Sen. Richard Blumenthal, D-Conn., said while pointing to an image of a 3-D printed semi-automatic assault rifle. “These ghost guns are the new wave of American gun violence. The failure to ban them will mean blood on the hands of officials who have that responsibility.”

Trump addressed the issue on Twitter on Tuesday morning and tweeted, “I am looking into 3-D Plastic Guns being sold to the public. Already spoke to NRA, doesn’t seem to make much sense!”

Later Tuesday, Senate Minority Leader Chuck Schumer, D-N.Y., criticized Trump for waiting to look into it until the day before the blueprints were scheduled to go online.

“Where the heck has he been?” Schumer asked. “This idea that he’ll look into it, we’ve been down that rabbit hole before. On issue after issue, the Trump administration’s M.O. when there’s a crisis is to say, ‘We’ll look into it. We’re working with the NRA.’ And then nothing happens. We’re going to have to pass legislation.”

The Democrats — as well as members of Everytown’s Veterans Advisory Council — argued the plastic guns would be untraceable, difficult to detect in metal detectors and require no background check. Sen. Ed Markey, D-Mass., called it the “ultimate gun loophole.”

“We support the federal laws that work to keep the public safe, which rely on criminal background checks to block gun possession by those who pose a danger to society,” the Veterans Advisory Council wrote. “And we believe strongly that downloadable firearms will undermine those laws, enabling anyone to print their own AR-15 or handgun with commercially available 3D printing technology.”

Everytown created the Veterans Advisory Council in May to weigh in on policy proposals and testify to Congress, using their combat experience and firearm expertise as reasons why their opinions should carry weight.