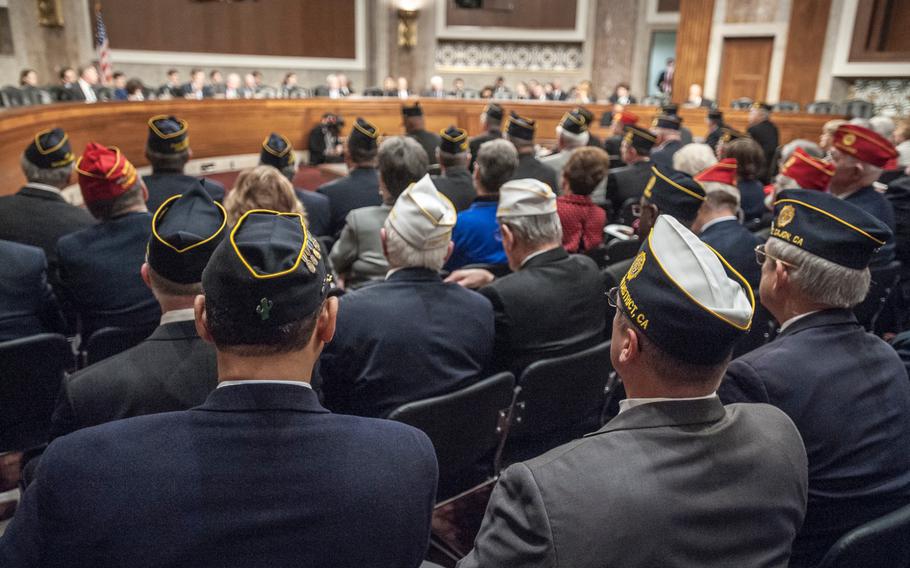 Buy Photo
Hundreds of American Legion members attend a a presentation on Capitol Hill on Wednesday, March 1, 2017, as members of Congress heard testimony on issues of concern to military veterans. (Carlos Bongioanni/Stars and Stripes)

WASHINGTON — Leaders of several major veterans organizations have been pushing White House officials for a meeting with President Donald Trump to discuss what they feel are the most pressing issues facing veterans.

On Tuesday, they got their wish. Sort of.

“I think the president should hear from us,” said Verna Jones, executive director for the American Legion, who is still determined to meet with Trump. “We can tell him exactly what vets need, what they want, what they’re saying. I think we deserve that, and I think the veterans we represent deserve that.”

Yet, each organization was allotted time to tell officials about their purpose and priorities, according to some members of the veterans groups who attended the meeting.

Representatives from the groups spoke positively about the exchange, saying they discussed major issues such as the Veterans Choice Program, holding VA employees accountable and modernizing the process veterans use to appeal claims for disability and pension compensation, among other things. Administration officials told them that establishing an office in the White House dedicated to veterans issues is being considered.

But Jones said the American Legion still wanted to hear from Trump.

The groups sent a joint letter to Trump in December but never received a response, they said. Their leadership was not present in February when Trump held a listening session about the VA in with health care executives.

While testifying to Congress last week, members of the American Legion and VFW said they had not met with Trump but thought a meeting was imminent.

Jones said the American Legion has regularly met with presidents in the past, and she had attended meetings with former President Barack Obama.

“The Big Six represent 5.6 million veterans, and 2.2 million of those are the American Legion,” she said. “And so when we ask for something like that, we’re shocked we haven’t heard anything back, that we’ve gotten no response.”

All six groups were at the White House on Tuesday.

“They have assured us it was a top priority of his, that he was working on being able to, at some point, meet with us,” Jones said after Tuesday’s meeting.

“It doesn’t matter how much face-time you get with the president or the secretary,” he said. “What matters is the policies they implement, and so far, I think the administration is off to a good start.”

Concerned Veterans for America, a conservative-leaning advocacy group, took part in the meeting Tuesday but hadn’t previously been invited to the White House under other presidential administrations, Caldwell said.

But the group has gotten more access since Trump’s election and one of the group’s senior advisers now has a full-time position at the VA. The group has advocated for a government-chartered nonprofit to take over management of VA hospitals.

CVA applauded Shulkin’s announcement last week that he would propose removing some VA restrictions so more veterans could use private sector health care.

The Travis Manion Foundation, Student Veterans of America, Got Your 6 and Wounded Warrior Project were also included in Tuesday’s meeting, according to people who attended.

Bill Rausch, executive director of Got Your 6 – a nonprofit that aims for an accurate public portrayal of veterans – said he asked Tuesday for Trump to “promote veterans as leaders and problem-solvers in his remarks and on Twitter.”

Rausch said there’s a prevalent image of veterans as “broken” that Trump could help temper.

“We know through our research that veterans are civic assets,” he said. “Unfortunately, most Americans don’t realize that, including members of Congress. We know that when the president speaks, America listens.”