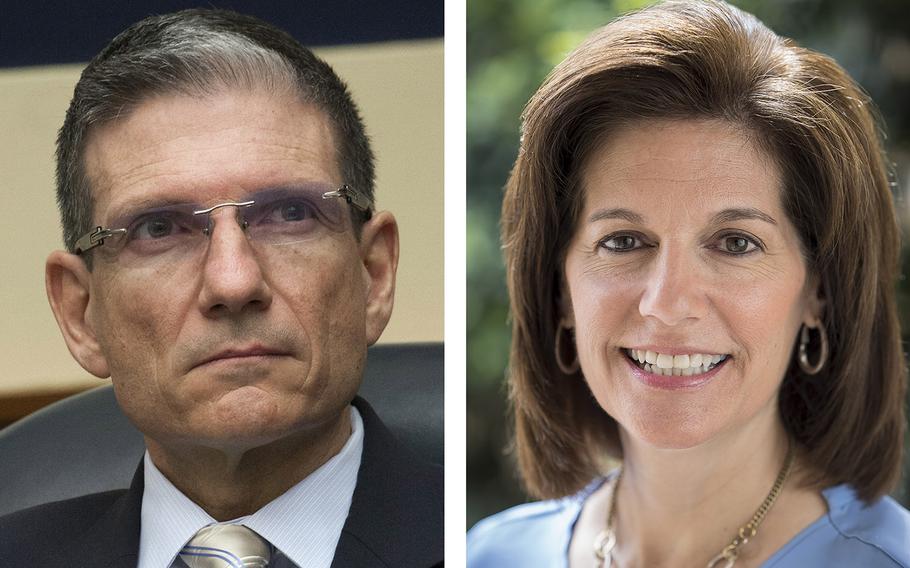 Rep. Joe Heck, R-Nev., and former Nevada attorney general Catherine Cortez Masto have both brought in hundreds of thousands of dollars in contributions from veterans' groups for their Senate race. (Stars and Stripes, left; catherinecortezmasto.com)

WASHINGTON — Two veterans groups are pouring money into the Senate race in Nevada, staking out opposite sides as a Republican brigadier general takes on a Democrat lawyer in one of the closest and most pivotal battles of the 2016 election.

The conservative Concerned Veterans for America said it is spending hundreds of thousands of dollars to elect Rep. Joe Heck as it pushes for more privatization in health care for veterans. At the same time, the liberal group VoteVets.org is buying more than $1 million in television ads to defeat Heck, in hopes of clearing the way for a victory by former state attorney general Catherine Cortez Masto, the Democrats’ choice to replace retiring Senate Minority Leader Harry Reid.

CVA and VoteVets.org are different from nonprofit veterans service organizations such as Veterans of Foreign Wars because their tax status allows them to directly participate in politics. Both groups argue the race is consequential for veterans but also have drawn support from big-money donors with tenuous relationships to veterans issues, such as the Koch brothers and labor unions, as interest in Nevada intensifies.

Heck or Cortez Masto could help determine whether the Republicans or Democrats have majority control of the Senate after the November election – an outcome that could hinge on a handful of races and hand the winner more legislative power. The Nevada contest was a toss-up Monday, according to Real Clear Politics, which tracks election polling.

“This is the first time in CVA history that we have encouraged people to explicitly vote for specific candidates,” said Dan Caldwell, vice president for policy and communications at CVA.

Earlier this year, the group said it spent $700,000 on advertising that praised Heck, who still serves in the Army Reserve, for supporting reforms at the Department of Veterans Affairs. Caldwell said Friday that CVA is also making a “six-figure investment” on a get-out-the-vote campaign that includes volunteers in Nevada knocking on doors to drum up votes for Heck.

CVA has been outspoken – and sometimes out of step with veterans service organizations – in its push for private health care over the VA, the federal government’s second largest bureaucracy. It is backing a House VA proposal, among the most radical, that would hand over veteran hospitals to a government-chartered nonprofit corporation.

Many of the country’s most prominent veterans service organizations are wary of privatization talk. They support some expansion of access to the private care but want the VA to remain firmly in control of managing that care.

A pro-Heck CVA ad from September said: “The VA is a system that is antiquated and needs changed.”

Caldwell said Heck has stood up for those issues and would be “extremely helpful” in the Senate.

“That is where we’ve run into the most resistance advancing our legislative agenda,” he said.

CVA is funded by thousands of donations from across the country, said Caldwell, who declined to disclose its donors. But the group has also been criticized for drawing big support from billionaire industrialists Charles and David Koch, and its VA legislative priorities dovetail with the Kochs’ aims to limit the size of government and oppose public health care.

Robert Maguire, a political investigator at the nonprofit, nonpartisan Center for Responsive Politics, said CVA is funded almost entirely by the Koch donor network, a collection of political groups and companies that have poured hundreds of millions of dollars into elections. CVA is registered as a 501(c)(4) group and not required to disclose who gives it money.

“It is convenient to be seen as supporting veterans when you are running ads against a particular politician,” Maguire said.

“They are here in Nevada trying to buy this election,” she said.

But VoteVets.org has drawn similar criticism for its big donors – while it has also decided to oppose the only candidate in the Nevada race with military service.

It received nearly $310,000 last week for its anti-Heck ad blitz from a Washington consulting firm called Waterfront Strategies that was linked to President Barack Obama’s re-election and other Democratic candidates, according to filings with the Federal Election Commission and the Center for Responsive Politics.

An ad released earlier this month features a Vietnam combat veteran from Las Vegas who said: “Our benefits are earned and we rely on them. Politicians like Joe Heck should understand that.”

The VoteVets.org ad and Heck’s opponent, Cortez Masto, claim he supported a government shutdown in 2013, which Heck has denied. The shutdown was caused by a budget impasse on Capitol Hill and Republican attempts to defund Obamacare.

Opponents are also hammering Heck for supporting GOP nominee Donald Trump until earlier this month. Heck withdrew support after a 2005 recording was released of the billionaire describing sexual assaults.

Overall, a Hillary Clinton super political action committee gave VoteVets.org more than $3 million during the past few months and is among the group’s biggest donors. Political groups linked to national labor unions gave $660,000 during the same time, the FEC filings show.

Jon Soltz, a former Army officer and chairman of VoteVets.org, said the group has attracted about 500,000 members – people who have given money or taken part in grassroots activities – and that it is proud of its links to labor groups. It operates a 501(c)(4) and a PAC, which faces donor reporting requirements.

He said labor unions are putting veterans to work and they support keeping jobs inside the United States. The AFL-CIO, the country’s largest federation of trade unions, and the American Federation of State, County and Municipal Employees, the largest trade union of public employees, appear to have donated to the group.

“Do we work for our labor allies? Absolutely,” said Soltz, who slammed CVA as a bought and paid for by wealthy interests.

VoteVets.org and CVA said their support for any candidate does not depend solely on them being a veteran or servicemember and they reserve the right to support non-veterans.

But the Nevada race is notable – Heck is the only candidate with any military experience. Cortez Masto never served in the military and has no experience dealing with complex military or veterans policy issues on Capitol Hill.

Heck, a physician, is chairman of a House Armed Services subcommittee on military personnel. He led efforts to overhaul the global system of commissary grocery stores – as many others were calling loudly for cuts – and the military health care system, which is separate from the VA.

“It is not as though all their donors are concerned about vets as much as they are [concerned with] electing Democrats to office,” Maguire said.

The Heck campaign swung back hard at the VoteVets.org ad earlier this month. Heck spokesman Brian Baluta called it the “most disgusting attack of this election” and panned the group as a mouthpiece for liberal interests.

“VoteVets has never done a single thing for our veterans,” Baluta said in a released statement. “The dark money they are spending in Nevada at the behest of their ultra-liberal, union allies will not change the fact that Joe Heck has always stood up for Nevada veterans because he is a veteran.”