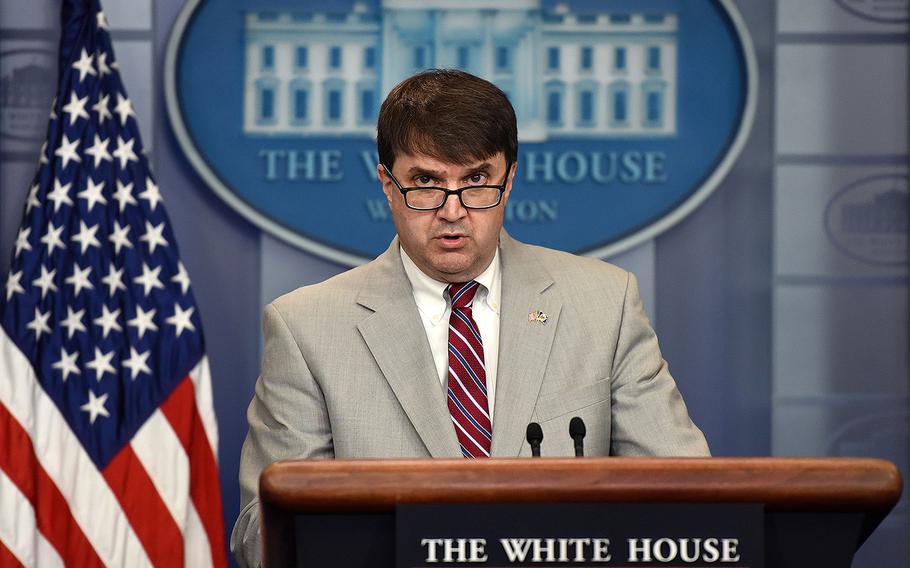 WASHINGTON — President Donald Trump’s announcement to nominate Robert Wilkie to lead the Department of Veterans Affairs on a permanent basis prompted new questions this week about whether Wilkie must step aside as acting secretary during his congressional confirmation process.

Trump announced Friday that he intended to nominate Wilkie as VA Secretary. Wilkie is a former military officer who served previously at the Defense Department as undersecretary for personnel and readiness. When Trump fired former VA Secretary David Shulkin on March 28, Wilkie took over the agency as acting secretary.

But on Tuesday, two advocacy groups sent out a news release that threatened more legal action if Wilkie doesn’t step down as acting secretary while the Senate considers his nomination. VoteVets, a left-leaning vets group, and the Democracy Forward Foundation, a nonprofit legal organization, called on Trump to appoint VA Deputy Secretary Thomas Bowman to take over the agency until a permanent VA secretary is confirmed.

Federal statute states a person cannot serve in an acting role for a position that must be confirmed by the Senate unless the person previously served as assistant to that office for 90 days.

In April, VoteVets and Democracy Forward Foundation filed a lawsuit against Wilkie arguing Trump illegally bypassed the order of succession after Shulkin’s dismissal when he tapped Wilkie to temporarily lead the VA, instead of Bowman.

“To say that Donald Trump’s handling of the VA has been a chaotic disaster would be an understatement, but he now has the chance to do one thing right,” said Will Fischer, director of government relations for VoteVets. “The law is clear, and the law, in this instance, actually prescribes that the best person take over for Robert Wilkie.”

In their lawsuit, the groups accuse Trump of circumventing federal statues, specifically the Federal Vacancies Reform Act of 1998 and the Appointments Clause of the Constitution. Now, if Trump appoints someone other than Bowman to acting VA secretary as Wilkie awaits confirmation, the groups contend they will amend their lawsuit to reflect another violation of federal law.

The veterans organization AMVETS also called on Trump to appoint Bowman as acting secretary and sent a letter to the White House on Tuesday requesting the president make the switch. However, Bowman has been in a precarious position at the VA for months because of infighting that roiled the agency and led to Shulkin’s dismissal.

“When the nomination becomes official, of course, Mr. Wilkie will need to step down as acting secretary,” AMVETS National Commander Marion Polk wrote to Trump. “It is crucial for all veterans relying on the VA now and in the future that the agency continues moving forward in the right direction. That will, of course, require another strong leader be appointed to serve as acting secretary until the new secretary is confirmed and sworn in.”

Wilkie had not been nominated officially as VA secretary as of Tuesday afternoon. It remained unclear whether Wilkie would step down once he was nominated and who might take over as acting secretary. The VA on Tuesday referred all questions to the White House, where officials would not comment.

Sen. Johnny Isakson, R-Ga., the chairman of the Senate Veterans’ Affairs Committee, said Tuesday that he did not know the White House’s position on the issue. He expected to receive answers in the next few days.

The VA has been without a permanent secretary for more than 50 days, creating alarm among veterans organizations that want consistent leadership following months of uncertainty.

Isakson said he plans to schedule a confirmation hearing for Wilkie as soon as possible after the Memorial Day weekend.

“We will do our due diligence as we always do,” Isakson said. “As soon as we finish that, hopefully we’ll have a recommendation to the full Senate, and hopefully that can be acted on quickly.”

Wilkie is Trump’s second pick for the job. His previous nominee, White House physician Ronny Jackson, withdrew from consideration in April amid allegations that he drank on the job and doled out prescription medication, among other problems.

Trump blamed Sen. Jon Tester, D-Mont., for Jackson’s failed nomination. Tester, the ranking Democrat on the Senate Veterans’ Affairs Committee, said he interviewed 23 of Jackson’s current and former coworkers who raised the allegations against him. Tester publicly released a summary of the allegations.

On Tuesday, Tester indicated he was likely to support Wilkie.

“Right now, I certainly don’t have anything that would cause me to not support him,” he said. “He’s a solid guy, but we’re going to put him through the process just like we would anybody. As that process unfolds, we will determine whether he’s a confirmable person.”