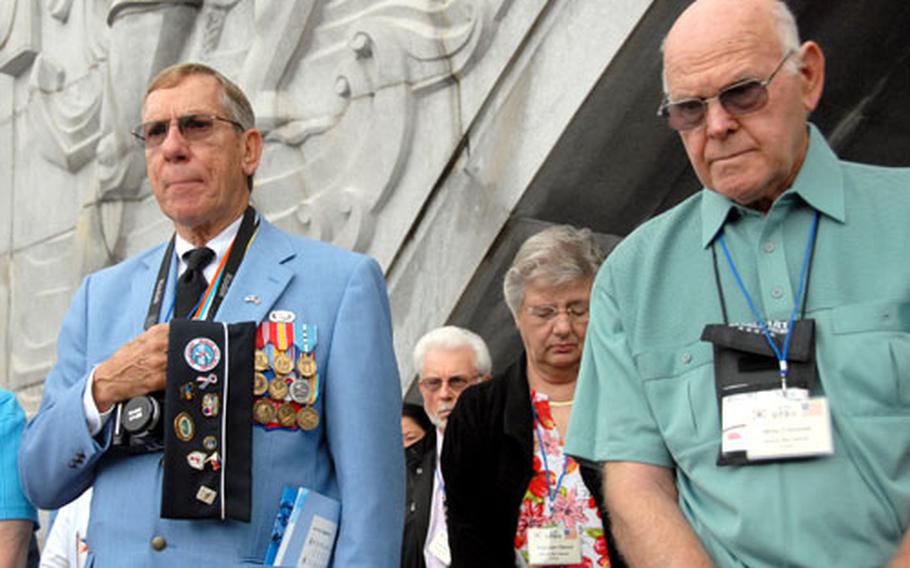 Charles Garrod, 73, and Willie Crenshaw, 77, stand during the playing of the South Korean national anthem Saturday during a ceremony marking the 57th anniversary of the Inchon landing. (Ashley Rowland / S&S)

Charles Garrod, 73, and Willie Crenshaw, 77, stand during the playing of the South Korean national anthem Saturday during a ceremony marking the 57th anniversary of the Inchon landing. (Ashley Rowland / S&S) 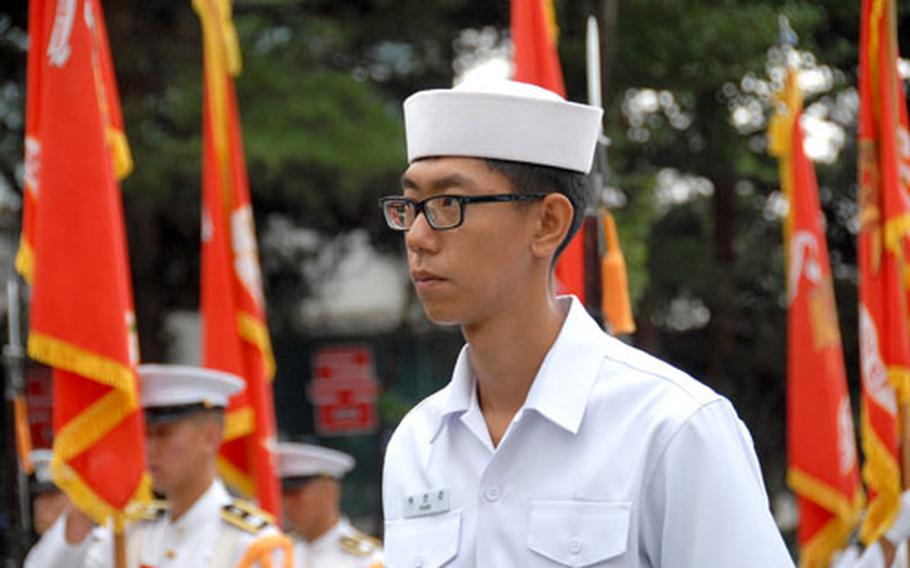 A South Korean sailor stands at attention during the ceremony marking the 57th anniversary of the Inchon Landing Operation, which changed the course of the Korean War. (Ashley Rowland / S&S)

INCHEON, South Korea &#8212; Hundreds gathered at the Inchon Landing Operation Memorial on Saturday to mark the 57th anniversary of the daring U.S.-led invasion into this port city, which split communist troops and changed the course of the Korean War.

Among them were several dozen U.S. veterans, most of whom hadn&#8217;t been to South Korea since the war ended with an armistice in 1953.

Then a 19-year-old Marine, Crenshaw said he was apprehensive about the landing, but he didn&#8217;t know the significance of what he was about to do.

Charles Garrod said South Korea was a &#8220;vast wasteland&#8221; when he was a senior airman stationed at Suwon during the war, and the country is unrecognizable to him today.

John Lee was an 18-year-old university student in Seoul when U.S. military officials recruited him to be an interpreter during the war. He was part of the first wave of Marines who landed at Inchon &#8212; now spelled Incheon &#8212; and said he wasn&#8217;t afraid because his leaders were World War II veterans who showed no fear.

Forty U.S. veterans and their family members attended the ceremony, said Jamie Wiedhahn of Military Historical Tours Inc., which coordinated their trips. The Korean Veterans Association, a South Korean-based group that arranges for veterans from around the world to travel to the country, paid for their expenses in South Korea, and the veterans paid for their airfare.

Maj. Gen. Frank Panter, commander of Marine Forces Korea, said during Saturday&#8217;s ceremony that the landing was &#8220;one of the most significant and successful operations in the history of amphibious warfare.&#8221;

&#8220;This daring and ingenious operation saved the fledgling Republic of Korea from utter destruction,&#8221; he said.

Wreath-laying ceremonies in the Incheon port and at the statue of Gen. Douglas MacArthur in Freedom Park were canceled due to bad weather.