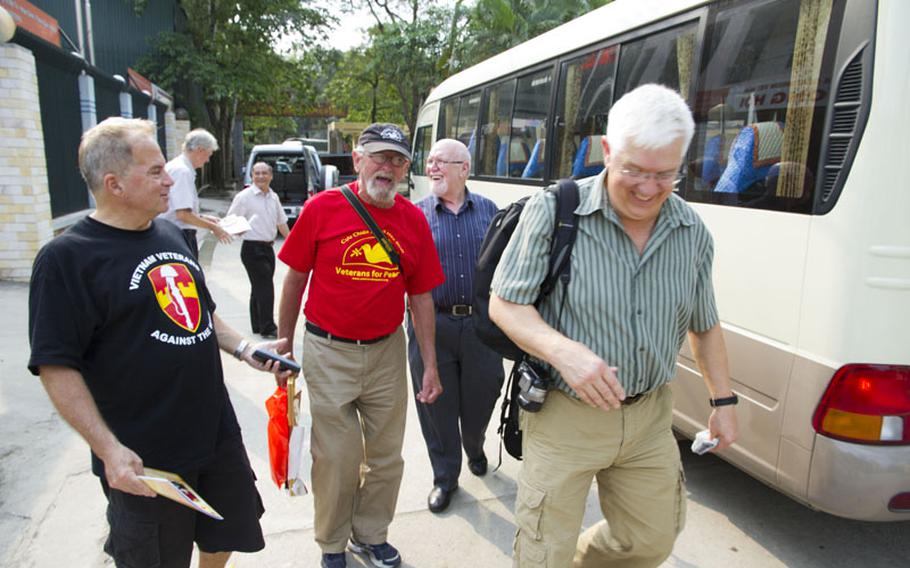 Buy Photo
Participants of the Veterans for Peace tour enjoy a laugh before boarding their bus in Hanoi. From left are Chuck Palazzo, Suel Jones, Michael Cull and Paul Cox. (Wyatt Olson/Stars and Stripes)

Buy Photo
Participants of the Veterans for Peace tour enjoy a laugh before boarding their bus in Hanoi. From left are Chuck Palazzo, Suel Jones, Michael Cull and Paul Cox. (Wyatt Olson/Stars and Stripes) 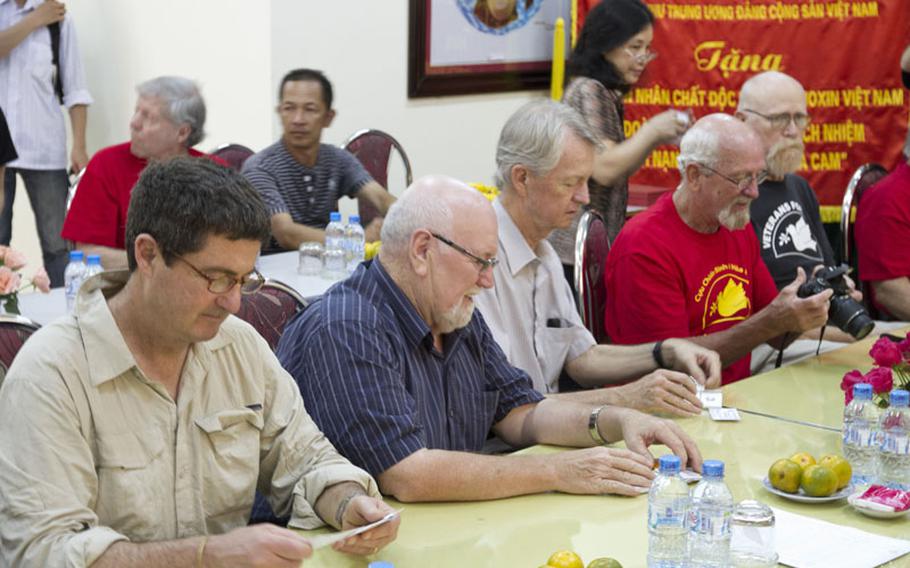 Buy Photo
Members of the Veterans for Peace tour listen to a presentation by the Vietnam Association for Victims of Agent Orange/Dioxin in Hanoi. Seated from left are Michael Blecker, Michael Cull, Chuck Searcy, Suel Jones and Bob Lindstrom. (Wyatt Olson/Stars and Stripes) 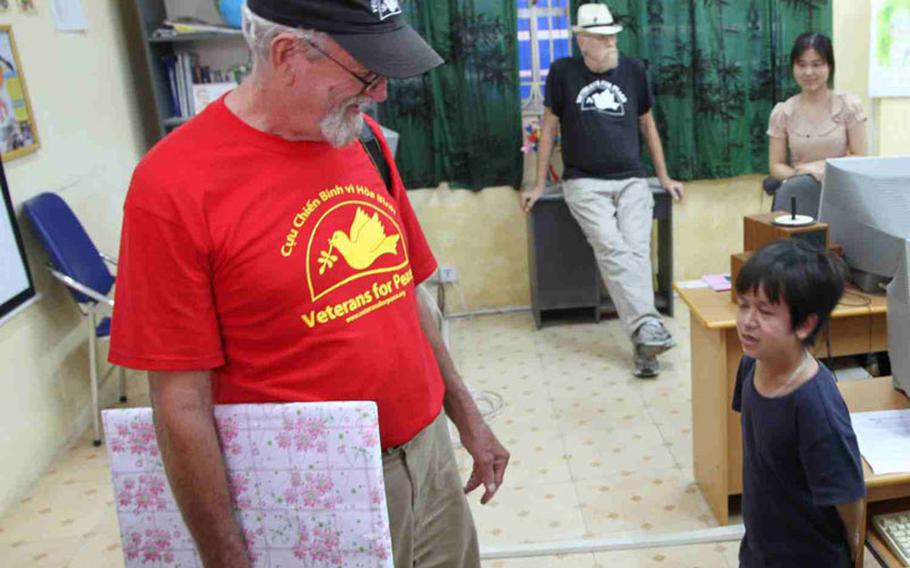 Buy Photo
Veteran Suel Jones talks with Canh Chi Long at a center in Hanoi that assists children and veterans who've been affected by Agent Orange. Years earlier Jones had helped Canh, who suffers from the effects of Agent Orange, get accepted into vocational training school to study computer skills after the school rejected him as having hands too small to use a keyboard. (Wyatt Olson/Stars and Stripes)

HANOI, Vietnam &mdash; Michael Marceau didn&rsquo;t leave Vietnam under the best of circumstances in May 1970.

Stationed about 30 miles from the Cambodia border in an infantry unit, he &ldquo;zigged instead of zagged&rdquo; during an early morning rocket attack and was hit by shrapnel. The metal entered his back, hit a lung, bounced off a rib and lodged in an artery and cluster of nerves in his left shoulder.

A buddy hoisted him into an idling jeep and saved him from bleeding to death. He was hospitalized two weeks, then spent months in rehab.

This month, Marceau, 63, came back to the country where he once served.

&ldquo;I want to try to make a better exit this time,&rdquo; Marceau joked as he strolled through the grounds around the Ho Chi Minh Mausoleum.

Marceau is one of nine vets who are taking part in the first Veterans for Peace Tour. The 14-day tour was arranged by the only international chapter of Veterans for Peace, which was established several years ago by a handful of vets who&rsquo;ve made Vietnam their home over the past 20 years.

The tour &mdash; which includes five vets returning to Vietnam for the first time since the war &mdash; began April 17 in Hanoi and will end in Ho Chi Minh City on Monday &mdash; 37 years from the day North Vietnamese forces swept into the capital of South Vietnam, then called Saigon, ending a nearly 30-year civil war.

For the past decade, America&rsquo;s attention has been on the wars in Afghanistan and Iraq, but for some who fought in the Vietnam War in the 1960s and early 1970s, the urge to return here and &ldquo;make things right&rdquo; has only grown.

Veterans of that era are reaching retirement age or are at the peak of careers that give them the means to return &mdash; and contribute. Most are concerned about the lingering affects of contamination by the herbicide Agent Orange and casualties from unexploded ordnance in the developing country.

&ldquo;We decided that starting a chapter of Veterans for Peace here was a good opportunity for two things,&rdquo; said Suel Jones, a Marine veteran who lives in Danang and conceived the tour. &ldquo;One is to use Veterans for Peace to educate people in the USA about the legacy of war. When we leave, a war&rsquo;s not over; it&rsquo;s just started for some people.

&ldquo;Secondly, it&rsquo;s doing something humanitarian &hellip; giving people the opportunity to give something back.&rdquo;

For tour members, that&rsquo;s a required $1,000 contribution that they were each required to bring. As they visit Agent Orange treatment centers, orphanages and families in small villages affected by illnesses and birth defects, they can offer direct aid, Jones said. That could be anything from a live pig to a new bed.

After the tour, the chapter members will decide how to spend whatever money is left.

&ldquo;It may take several months to design a good way to handle it,&rdquo; Jones said. &ldquo;You come over here with $1,000 to donate and you don&rsquo;t know anybody, that $1,000 could be totally wasted. We&rsquo;ve been here long enough to build relationships. You keep [the money] as far down among the people as possible.&rdquo;

Although primarily a humanitarian tour, it also mixes in sightseeing.

Their last day in Hanoi before traveling south was particularly ambitious: the Ho Chi Minh Mausoleum; the Confucian Temple of Literature; a visit to the Vietnam Veterans Association, headed by a former North Vietnamese general; lunch at Koto, a nonprofit restaurant that houses and trains down-and-out youths for jobs; a sit-down with the leadership of the Vietnam Association for Victims of Agent Orange/Dioxin; and a trip to the outskirts of Hanoi to Friendship Village, a center that aids children and veterans affected by Agent Orange, established in 1988 by U.S. veteran George Mizo.

This was Paul Cox&rsquo;s third trip back since the war, when he was a Marine in 1969-70. He&rsquo;s been a primary mover behind the Veterans for Peace&rsquo;s Vietnam Agent Orange Relief and Responsibility Campaign.

He said he thought the tour would be a chance to gain first-hand knowledge about the problems &mdash; and cleanup efforts &mdash; of unexploded ordnance. The tour would include visits with UXO victims in Quang Tri Province, the most heavily bombed in Vietnam during the war and also an area he was in as a Marine.

&ldquo;I carried a lot of baggage from my war time here,&rdquo; Cox said while explaining his growing involvement with post-war Vietnam. &ldquo;I was very upset about the way we&rsquo;d treated Vietnam. By the time I left the war zone, I&rsquo;d become very much against the war.

&ldquo;All these years I&rsquo;ve kind of wondered what could be done to make reparations or to make things better,&rdquo; he said. &ldquo;It became clear that Agent Orange is not something that&rsquo;s gone away &mdash; it&rsquo;s still a bomb that continues to explode in Vietnam every day &mdash; I became motivated to help in that.&rdquo;

The U.S. sprayed about 77 million liters of Agent Orange over Vietnam during the war, according to Steven D. Stellman, an epidemiologist and Agent Orange expert at Columbia University in New York City. Almost 5 million Vietnamese were exposed to it.

The Vietnamese government pays monthly subsidies amounting to $50 million a year to victims who are ill or born with birth defects as a result of the herbicide, according to the association for victims. The group says dioxin has continued to cause birth defects in children a third generation removed from the actual spraying.

The veterans on tour all agreed that the U.S. had done too little to aid Vietnam in cleaning up the legacy of war and assisting its victims.

Vietnam vets who were marginalized during the war years have slowly come to be regarded as elder statesmen in the era of Iraq and Afghanistan, said Michael Blecker, an Army Airborne vet from 1968-69, who was with the tour.

And that could make them more effective in calling for more U.S. aid to clean up the war&rsquo;s damage.

&ldquo;Veterans have all this credibility that we didn&rsquo;t have before, oddly enough,&rdquo; he said. &ldquo;People want to know how veterans think. It&rsquo;s amazing &mdash; and it&rsquo;s an important opportunity to talk about the cost of war.&rdquo;

&ldquo;It&rsquo;s always part of your interior,&rdquo; he said. &ldquo;I mean, you spend two tours here, it&rsquo;s a part of your life, an important part.&rdquo;

Why did he choose to return for the first time with this humanitarian tour?

&ldquo;I&rsquo;m retired. I get a pension. I get Social Security. I&rsquo;m gonna run out of time before I run out of money,&rdquo; he said. &ldquo;I&rsquo;m happy to participate. I don&rsquo;t give a [expletive] about the whales and things like that. Sick people? Yeah.&rdquo;