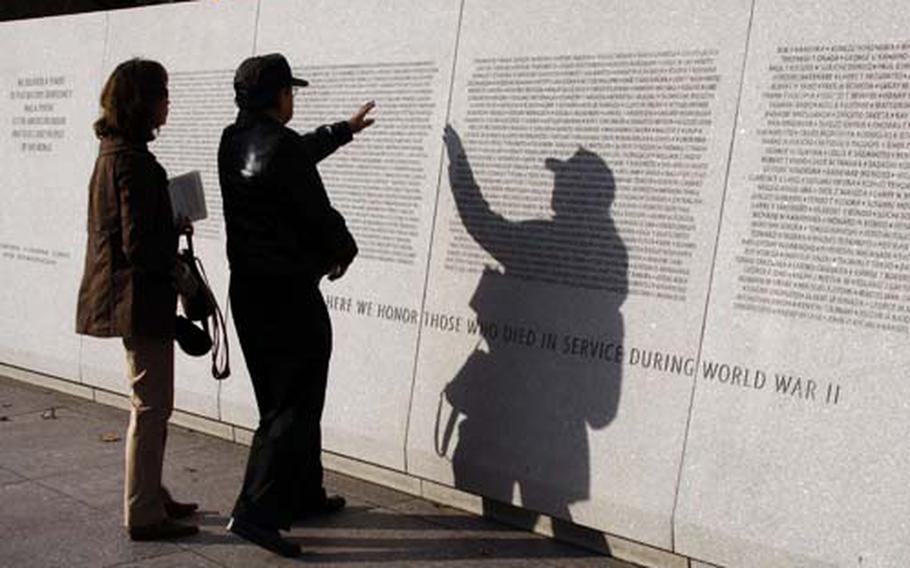 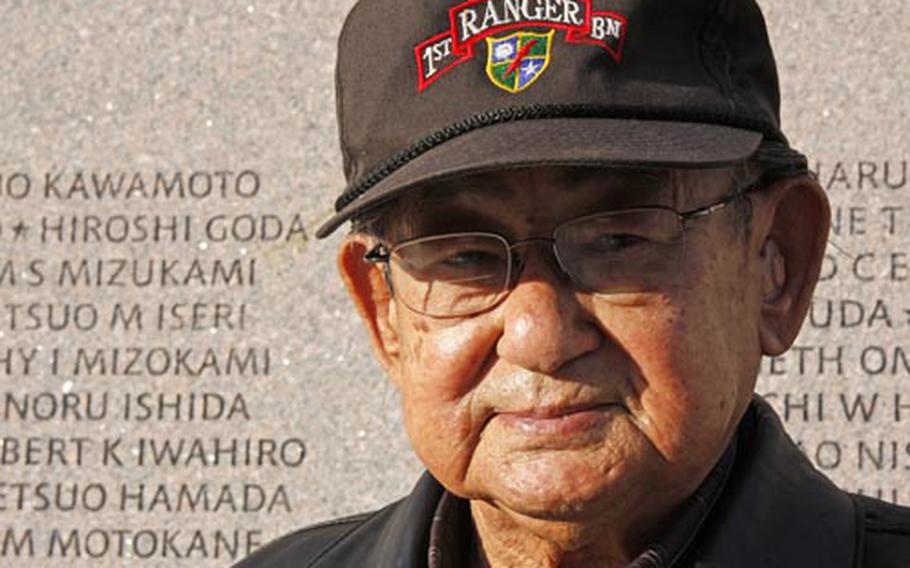 Born in Seattle, WA, Grant Hirabayashi and his family were removed from their home and placed in the Tule Lake internment camp in Wyoming. Fluent in Japanese, Hirabashi left the camp to serve as a Tech. Sgt. in the U.S. Army 5307 Composite Unit, Merrill&#39;s Marauders, in Asia. (Robin Hoecker / S&S)

WASHINGTON, D.C. &#8212; Far from the Veterans Day crowds along the national mall, a small group of World War II veterans gathered in a secluded park north of the U.S. Capitol Tuesday afternoon.

Like other veterans, they wore their military hats, uniforms and American flag pins with pride. But these particular war heroes have a unique story and place in our nation&#8217;s history. They are the Japanese-American veterans of World War II.

&#8220;They fought two separate wars &#8212; one abroad and one against racism at home,&#8221; said Lynn Betancourt, whose father, Grant Hirabayashi, served as a tech sergeant in the 5307 Composite Unit, also known as Merrill&#8217;s Marauders, in China, Burma and India. Fluent in Japanese, Hirabayashi worked in military intelligence while his family was forced to leave their home in Seattle and move to an internment camp in Tule Lake, Wyoming.

About 33,000 Japanese Americans served in the U.S. military during World War II. Of those, 812 lost their lives. Their names are inscribed on the wall of the Japanese American Memorial to Patriotism during World War II, which was commissioned by an act of Congress and dedicated in 2000. The memorial honors those who served, but also the Japanese-Americans that suffered hardships during internment.

The names of the internment camps, along with the number of people who lived there, are etched into the curved, rear wall of the memorial. The shape is designed to reflect the sound of the gong at the entrance. A separate stone panel features excerpts from the official apology given when President Reagan signed the Civil Liberties Act in 1988. In the center are rocks that jut up from a pool of water that reflects the autumn leaves above.

&#8220;This monument tells many, many stories,&#8221; said Hirabayashi, smiling in the afternoon sun. With the help of his daughter, he found the name of his cousin, William Mizukami &#8212; who died serving in the Army&#8217;s 442nd Regimental Combat Team in Europe &#8212; and gently ran his fingers over the name.

Other EventsIn other ceremonies held in the Washington area on Tuesday:

&#8226; At the Vietnam Veterans Memorial, the annual Veterans Day observance focused on the 15th anniversary of the dedication of the Vietnam Women&#39;s Memorial.

Vietnam War Army nurse Diane Carlson Evans, founder and president of the Vietnam Women&#8217;s Memorial Foundation, remembered that when the Glenna Goodacre-designed and sculpted statue was dedicated in 1993, "one woman veteran said &#39;the Potomac rose two inches today from all the tears shed,&#39; and I think she was right."

Evans praised Goodacre, sating that "your gifted hands have left us with everything you had hoped for. We are ever grateful to you and we are so honored by what you did for us.

"You captured the humanity, the dedication and the spirit of all of us women, many of whom risked their lives, but also you captured the suffering of our brother soldiers in that one figure, our wounded soldier. With that wounded soldier you united us in a way that truly symbolized our service together and the strong ties that have shaped our lives since that time."

&#8226; With President Bush in New York for the rededication of the USS Intrepid Sea, Air and Space Museum, Vice President Dick Cheney presided over the annual placing of a wreath at the Tomb of the Unknowns at Arlington National Cemetery.

&#8220;No single military power in history has done greater good, shown greater courage, liberated more people, or upheld higher standards of decency and valor than the armed forces of the United States of America,&#8221; Cheney said.

Get the Flash Player to see this player.//See full Veterans Day photo gallery .