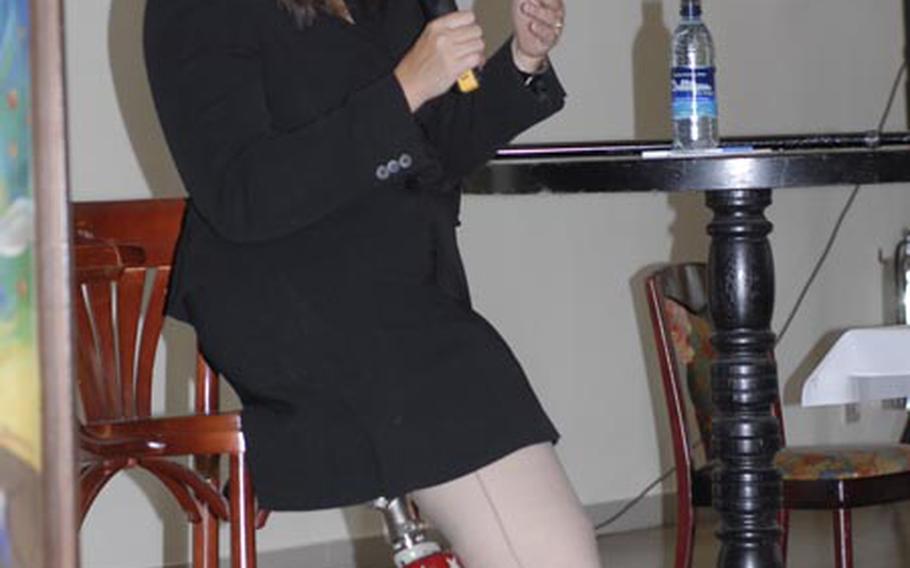 Tammy Duckworth, director of the Illinois Department of Veterans Affairs, discusses the attack on her Black Hawk helicopter in 2004 that caused her to lose both legs. (Mark Abramson / S&S)

Nearly four years after Tammy Duckworth lost her legs in Iraq, she is breaking new ground in her role as director of the Illinois Department of Veterans Affairs.

As an Illinois National Guard major and former Black Hawk pilot, Duckworth is no stranger to the emotional and physical toll of war. She lost her legs when a rocket-propelled grenade hit her chopper in November 2004.

Duckworth, who spoke in Heidelberg, Germany, on Thursday about overcoming her disability, is credited with starting a program that helps veterans and servicemembers get help for post traumatic stress disorder and traumatic brain injuries. The program is called the Illinois Warrior Assistance Program, and its Web site, www.illinoiswarrior.com, can be accessed by anyone.

"It was something that I approached our governor about doing when I realized that many of our returning veterans had never been screened for post traumatic stress disorder or specifically the traumatic brain injury component of it," Duckworth said.

Although the department has not released exact numbers as to how many people have logged on to the site since it was created in January, it has received over 10,000 hits and callers to its 24-hour hotline, the latter of which is only available to people in Illinois.

Armed forces members in Germany have used the Web site extensively, Duckworth said. Another 500 people have been helped by calling the hotline.

"We are finding a huge number of Vietnam veterans calling in as well," she said.

The site talks about PTSD and traumatic injuries and teaches people how to spot the symptoms. It is also available to servicemembers and veterans&#8217; families.

Duckworth said such a program was needed because Illinois is a predominantly rural state with very few military bases and many of its veterans live far from Veterans Administration hospitals.

Those calls sparked Duckworth&#8217;s department to work with the Rehabilitation Institute of Chicago and Illinois Brain Injury Association to screen for post traumatic stress disorder and traumatic brain injuries. Counselors and medical professionals who were familiar with the military were trained to staff the hotline.

About two dozen other states, the National Guard, Centers for Disease Control and Prevention and Department of Defense have also asked about the program, she said.

The CDC and DOD showed interest in learning how Illinois provided the medical care with the counselors because the Veterans Administration has a shortage of mental health professionals, Duckworth said.

DOD and CDC officials could not be reached for comment.

Other states have developed programs to help returning armed forces personnel and veterans as well. Minnesota Department of Veterans Affairs officials worked with Oakdale, Minn.-based Imation Corp. to distribute 2,000 flash drives filled with information to help National Guardsmen reintegrate with society after they were deployed.

Minnesota has also developed a hotline for servicemembers and veterans. That service, called LinkVet, has been used more than 1,700 times since it was activated in August 2007.