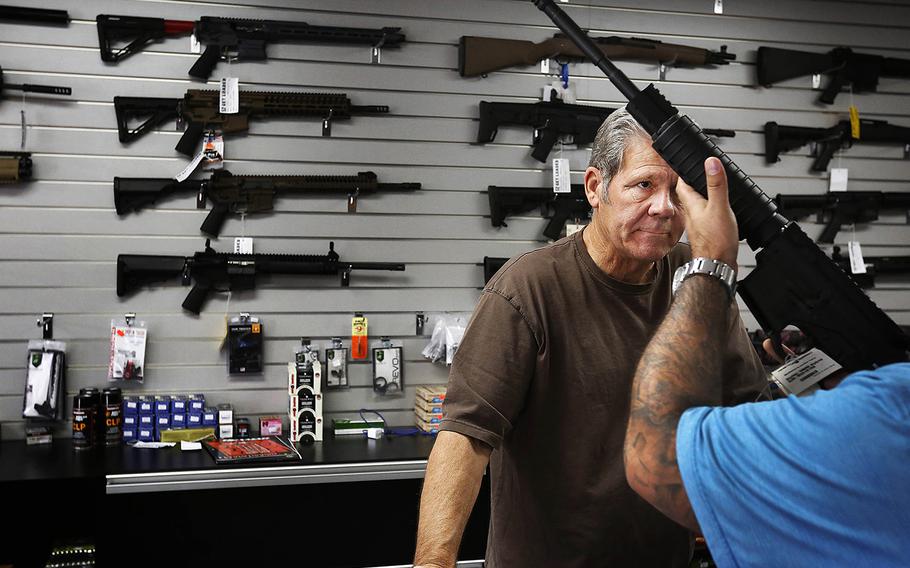 SAN ANTONIO — Veterans are becoming more vocal in the nation’s gun control debate, using their service and experience with weapons as a platform in the wake of the Orlando nightclub killings.

Veterans have blitzed the media in recent days to make their arguments. Retired Army Gen. Stanley McChrystal highlighted one side of the debate in the New York Times, writing that veterans should amplify lawmaker efforts to pass legislation aimed at more stringent background checks, including restrictions on felons, domestic abusers and individuals who have been subject to terror investigations by the FBI.

Roughly 2.5 million troops have deployed to Iraq and Afghanistan, with many earning experience and perspective on the utility of firearms at war and home.

Much of the domestic gun control debate centers on the AR-15 family of rifles, first introduced in the late 1950s and later adopted by the U.S. military in the 1960s during the war in Vietnam, when it was designated as the M-16.

The M-4, a carbine variant of the M-16 with a collapsible stock and shortened barrel, has become the standard service weapon for military and tactical police units.

“We are trained in the use of firearms, and many of us have served in combat. And we all think our country must do more to save lives from being cut short by gun violence,” McChrystal wrote Thursday. “As this national crisis continues to rage, I ask my fellow veterans — patriots who have worn the uniform, who took an oath to protect our Constitution and the Second Amendment, who served this great country — to add your voice to this growing call for change. America needs you.”

McChrystal, senior commander of U.S. forces in Afghanistan from 2009-2010, resigned after critical comments about President Barack Obama’s war policies were made public in Rolling Stone magazine.

The group launched their initiative two days before Omar Mateen, 29, killed 49 and wounded more than 50 in a gay nightclub in Orlando. The attack killed an Army reservist and an Army veteran.

On Monday, Bethea told Stars and Stripes that he’s not a gun expert, but he knows a lot about shooting a M-4.

“The notion of someone needing a rifle like that for home defense or any other purpose seems like a retroactive justification,” he said.

Bethea, who has been familiar with firearms since a young age, said he is not against all gun ownership. His parents use a Winchester .22 rifle to defend livestock in rural Indiana from predators. But military-grade rifles are a step too far for practical defense, he said.

Former Navy SEAL Dom Raso took the opposite viewpoint on the AR-15 rifle in a video released Wednesday by the National Rifle Association.

AR-15-style rifles are the most popular rifles in the country, according to the NRA.

“This firearm gives average people the advantage they so desperately need and deserve to protect their life, liberty and happiness,” Raso said in the video, connecting the utility of the rifle for citizens to defend against attacks like the ones in San Bernardino and Orlando.

The video has generated more than 300,000 views in less than a week and landed Raso on a Fox News segment Thursday morning. Raso did not reply to an interview request from Stars and Stripes.

After New York Daily News reporter Gersh Kuntzman penned an essay Wednesday in which he described firing an AR-15 “sounded like a cannon” and gave him “temporary (post-traumatic stress disorder),” the military satire website Duffel Blog said he would receive the National Defense Service Medal and compensation from the Department of Veterans Affairs.

The article has more than 36,000 shares on social media—soaring far above other recent articles.

Kuntzman was also the subject of memes on military-themed Facebook pages this week. One community page for infantry combat veterans has used Kuntzman’s photo to generate dozens of memes critical of his perceived lack of knowledge about firearms.

The high-profile discussion on gun control policy continued as four gun-focused bills introduced by the Senate were voted down Monday, which included measures to bolster background checks and restrict people on terrorist watch lists from purchasing firearms.

“I don’t see why we make these things so readily available when they’re designed specifically to kill the enemy,” Bethea said, speaking about AR-15-style rifles.