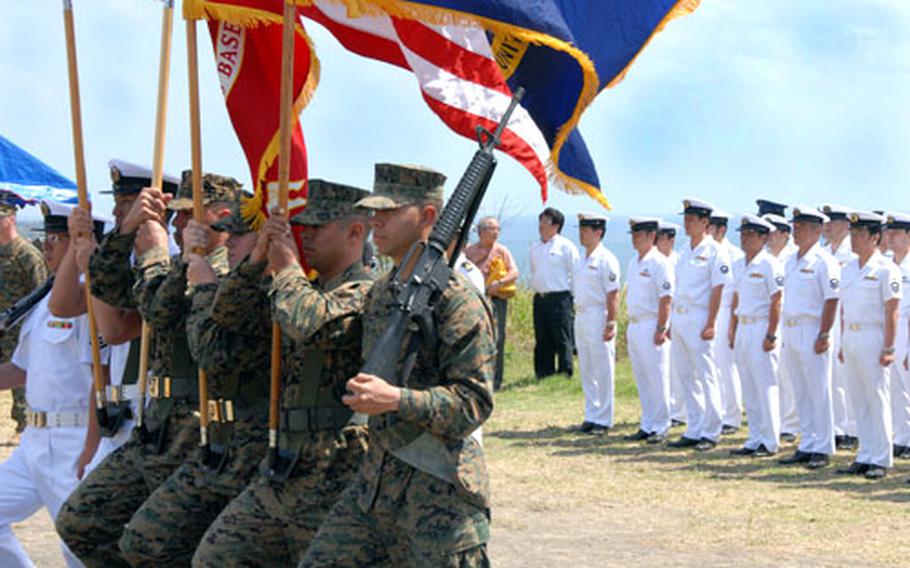 Marines present the colors at the ceremony Wednesday, along with two Japanese sailors who were taught the moves the day before. One of the Japanese sailors said he didn&#39;t really want to participate until he realized how precious the color guard is to the Marines. (Megan McCloskey / S&S)

Marines present the colors at the ceremony Wednesday, along with two Japanese sailors who were taught the moves the day before. One of the Japanese sailors said he didn&#39;t really want to participate until he realized how precious the color guard is to the Marines. (Megan McCloskey / S&S) 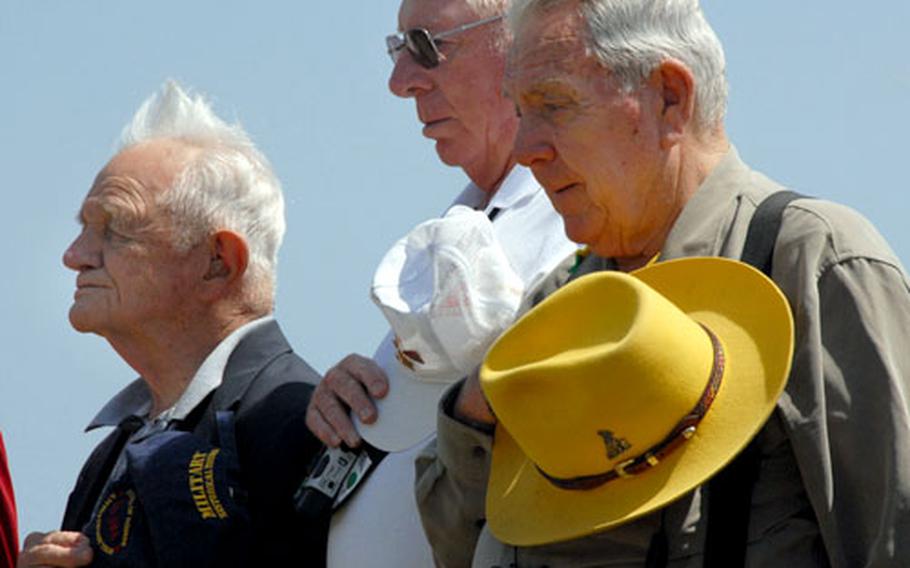 Hurb Thompson, center, and James Ware, right, stand with the other US veterans as a wreath is laid on the Reunion of Honor Memorial on Iwo Jima. (Megan McCloskey / S&S) 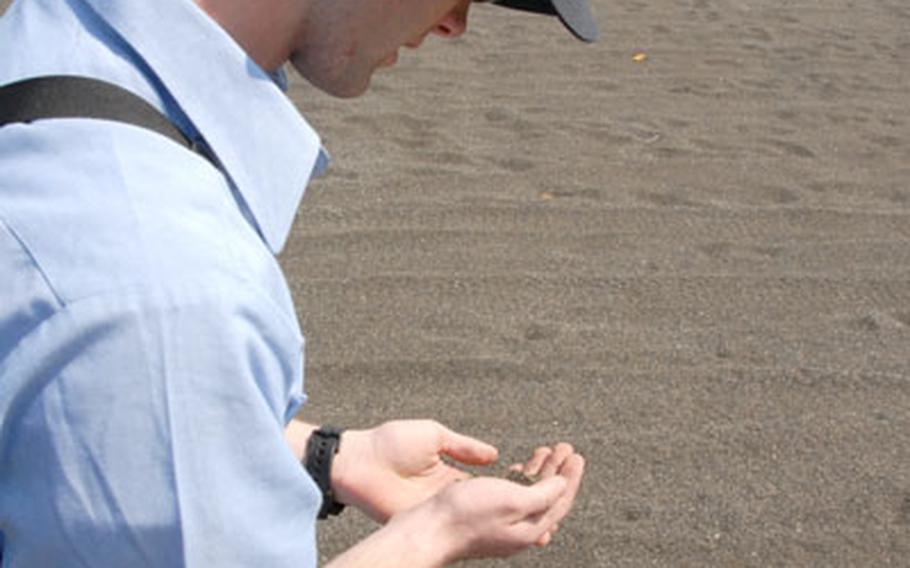 Seaman Joshua Langland holds a fistful of sand from Invasion Beach on Iwo Jima, where the Americans started their massive amphibious assualt on the island. Langland&#39;s grandfather was a part of that attack. (Megan McCloskey / S&S) 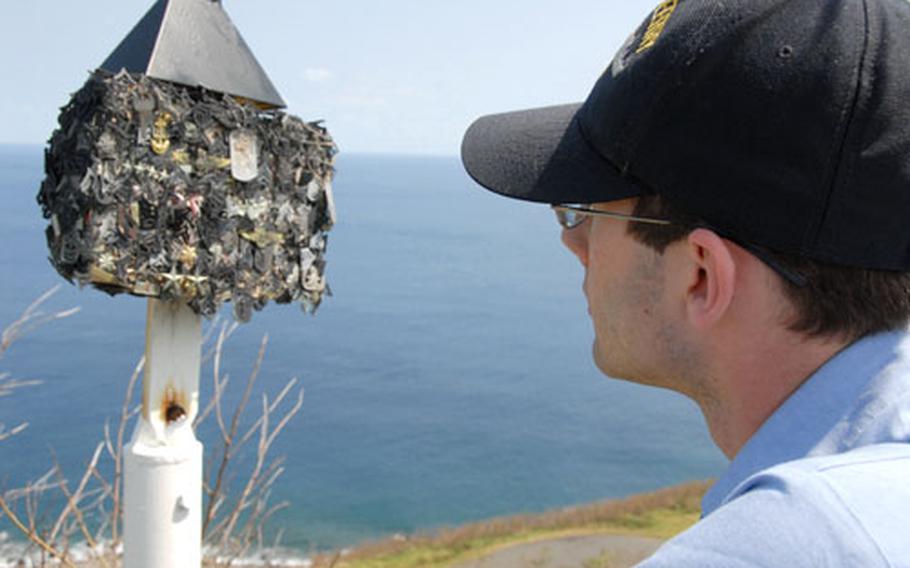 Seaman Joshua Langland looks at the chevrons, other rank insignia and dog tags placed near the memorial on top of Mt. Suribachi on Iwo Jima. (Megan McCloskey / S&S) 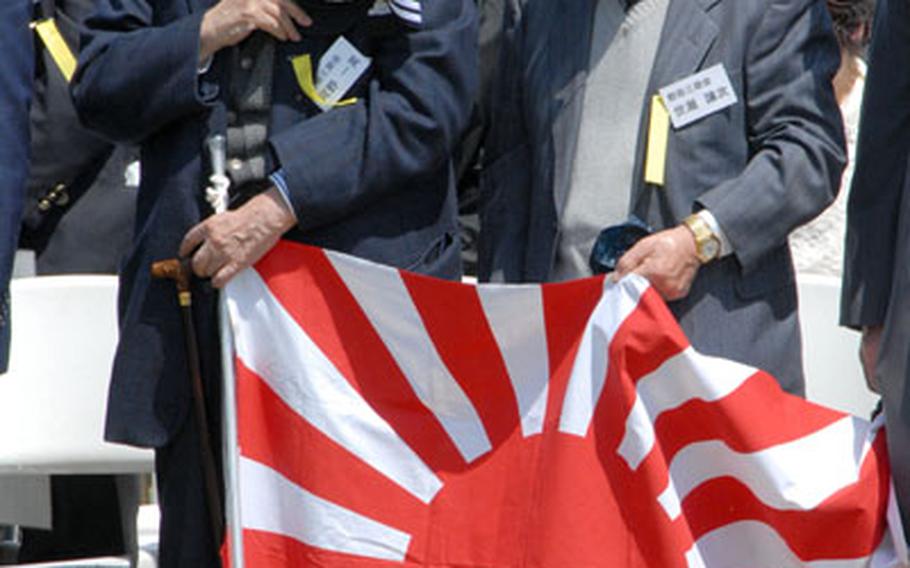 Japanese veterans of the battle for Iwo Jima stand as their national anthem plays during the ceremony on Wednesday. (Megan McCloskey / S&S)

IWO JIMA, Japan &#8212; He scooped up a fistful of the black sand and squeezed it tight before slowly letting the dark grains pass through his fingers.

The anniversary of the fateful World War II battle, which claimed 22,000 Japanese lives and killed or wounded more than 26,000 U.S. troops, was commemorated Wednesday in a ceremony on the small island off the eastern coast of Japan.

Langland, assigned to USS Harpers Ferry out of Sasebo Naval Base, Japan, knows of his grandfather&#8217;s feats in that 36-day campaign only from what his dad has told him.

The 22-year-old sailor stood atop Mount Suribachi &#8212; where the American flag was famously raised on Feb. 23, 1945 as the battle raged &#8212; and squinting through the midday sun, tried to imagine what his grandfather went through as one of the first Marines to hit the beach in the bloodiest battle in the Corps&#8217; history.

Veterans from both countries attended the ceremony. Many of them were on the island for the first time since the war.

The retired Air Force lieutenant colonel said that after many years of holding back he just started to share those types of stories with his 57-year-old son, who was at the ceremony with him.

Veteran Maurice Richardson, who earned his first stripe on Iwo Jima, said it was hard to believe this was the island where &#8220;every rock I&#8217;d wonder what was behind it.&#8221;

Taking out a photograph of himself as a 19-year-old standing on a rock quarry 62 years ago, he smiled and tapped the image.

Hurb Thompson, who still has shrapnel in his body from the battle as a 19-year-old private first class, got a little teary-eyed talking about being back on the island.

He came alone to the ceremony, but he said he wished he had family with him to share the moment of seeing the rock quarry where he set up his machine gun or the place on the beach where he was wounded.