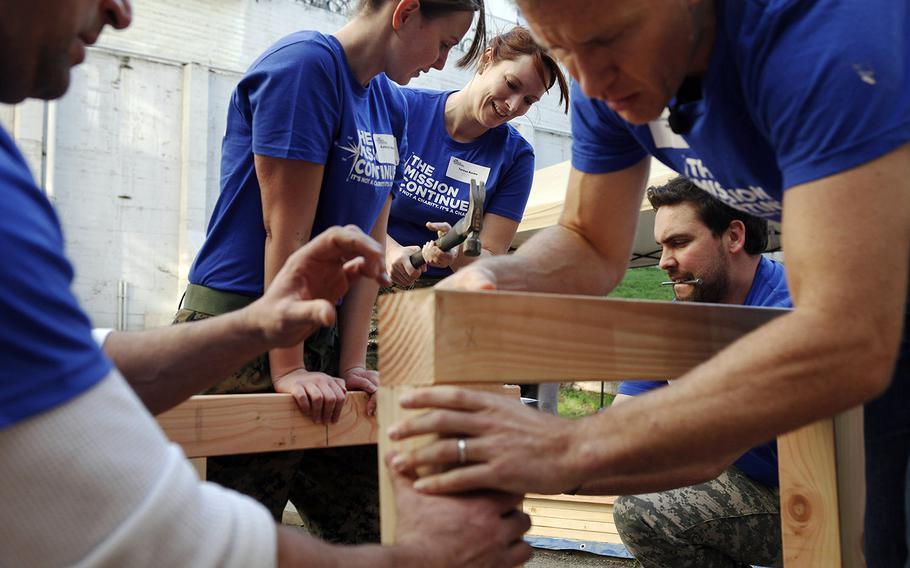 In a January, 2013 file photo, Kathryn Hernandez, left, and Blake Bourne work on a project at a social service site in Los Angeles as part of The Mission Continues, which places veterans into six-month stints at non-profits before they find full-time employment or go back to school. (Katie Falkenberg, Los Angeles Times/TNS)

Instead of taking off Wednesday, hundreds of former servicemembers across the country will roll up their sleeves and pick up shovels, paintbrushes and ladles to mark Veterans Day.

As part of The Mission Continues, veterans will organize into “platoons” to focus on community service at projects in 22 cities, while other Americans gather for parades or search for sales. The nonprofit’s efforts will include a special dinner at a St. Louis veterans home for WWII veterans, a softball field makeover at a Detroit public school and painting the interior of a veterans homeless shel-ter in Portsmouth, Va.

The Mission Continues uses community service to help veterans leaving the service transition to civilian life while retaining some of the structure and values that they cherished in the military, said Brian Wilson, The Mission Continues’ national service platoon manager.

“As much as veterans want to be thanked for their service, we want to be useful,” he said. “When you come back home and take off that uniform and put the boots away, you wake up in the morning and say, ‘OK, what am I going to do today that matters to my community and my country.”

In Washington, D.C., Andy Ludin’s The Mission Continues platoon will install grill pits, build game tables and restore the neighborhood basketball court at Congress Park in the city’s Con-gress Heights neighborhood, a historically disadvantaged corner of the city. The projects give veterans an opportunity to give back but also connects them to their communities, said Ludin, an Air Force veteran.

Non-veterans are invited to all of the events, which Wilson said double as vehicles to break down barriers between civilians and current and former servicemembers. Wilson said people who haven’t been in the military or in combat might never understand that world, but he thinks veterans telling their stories can bring them closer to their neighbors.

“The only way they will know is if you approach them and start telling them your story,” he said. “Get out there, show them what you can do and build a bridge to your community.”