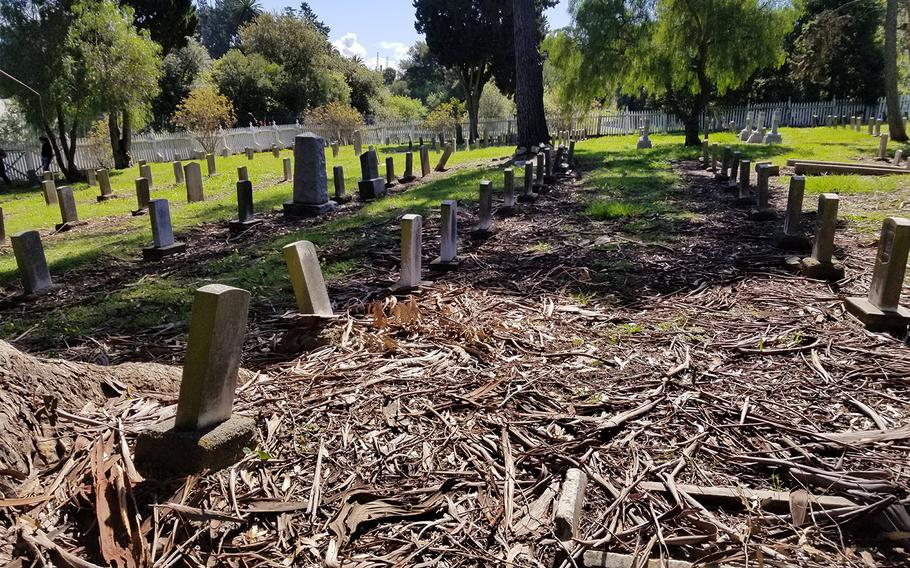 The Mare Island Naval Cemetery, the oldest military graveyard on the West Coast, is in dilapidated conditions. The landscape of the Vallejo, Calif., graveyard is marked by patches of grass, weeds and piles of bark. Some 19th century headstones are falling and held up by logs. Stone work throughout the site is crumbling. A white picket fence that has darkened over time is falling. (Photo Courtesy Thomas Jamison)

The Mare Island Naval Cemetery, the oldest military graveyard on the West Coast, is in dilapidated conditions. The landscape of the Vallejo, Calif., graveyard is marked by patches of grass, weeds and piles of bark. Some 19th century headstones are falling and held up by logs. Stone work throughout the site is crumbling. A white picket fence that has darkened over time is falling. (Photo Courtesy Thomas Jamison) 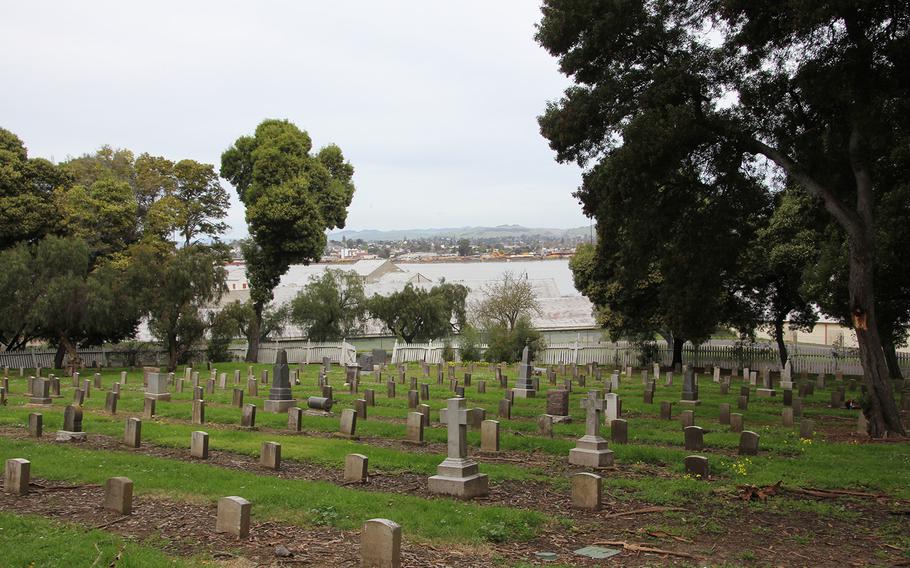 Retired Navy Capt. Ralph Parrott stumbled upon the Mare Island Naval Cemetery during a visit to an old, nearby military base. “It was a disgrace,” Parrott, 77, who lives in the northern Virginia, said of his March 2017 visit there. He’s now made it his mission to bring the cemetery back to its former glory. (Photo courtesy Ralph Parrott) 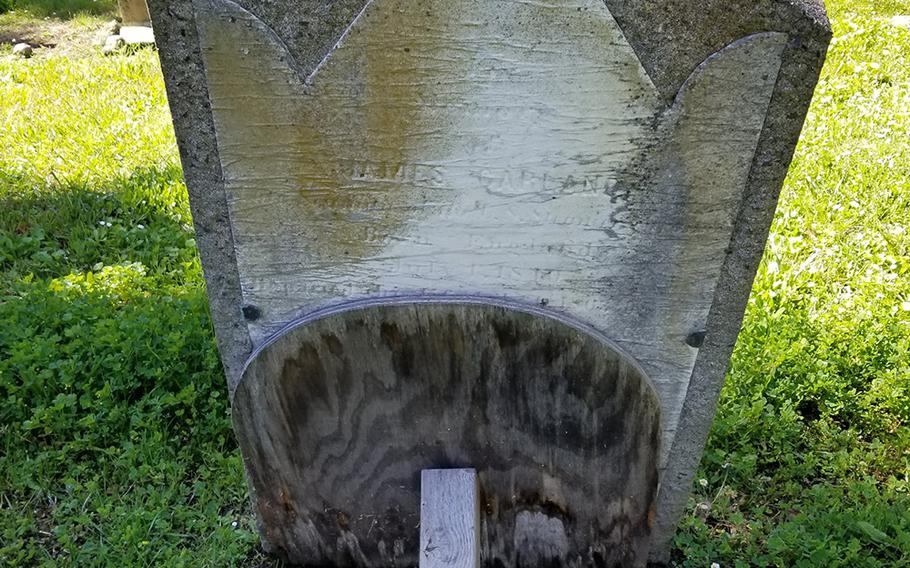 Some of the 19th century headstones at the Mare Island Naval Cemetery in Vallejo, Calif., are falling and being held up by logs. (Photo courtesy Thomas Jamison) 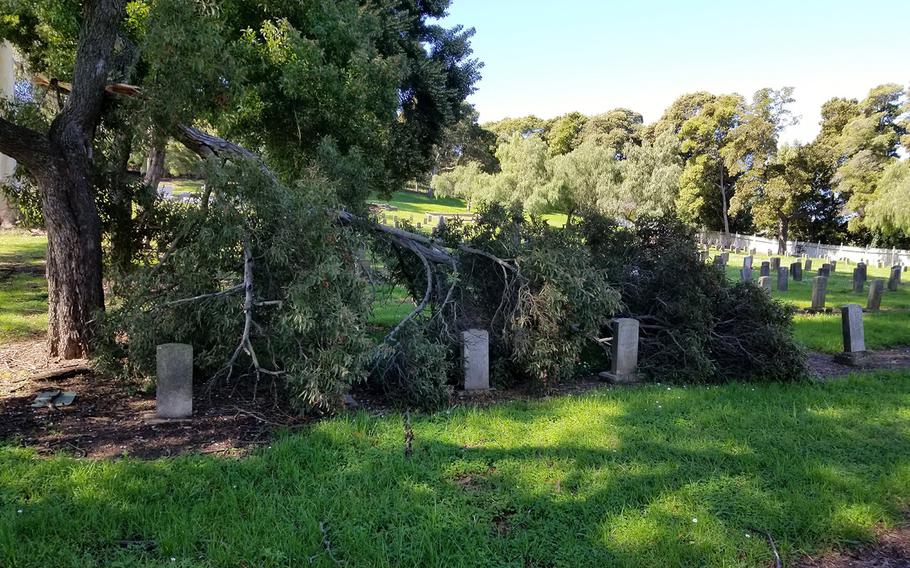 The Mare Island Naval Cemetery, located in Vallejo, Calif., is marked by neglected and fallen old pepper and eucalyptus trees. Other concerns threaten the cemetery, from sinkholes to invasive tree roots, despite efforts by area volunteers to upkeep the site. The cemetery was maintained by the neighboring Mare Island Naval Shipyard until it was closed through the Base Realignment and Closure Act in 1996. (Photo courtey Thomas Jamison) 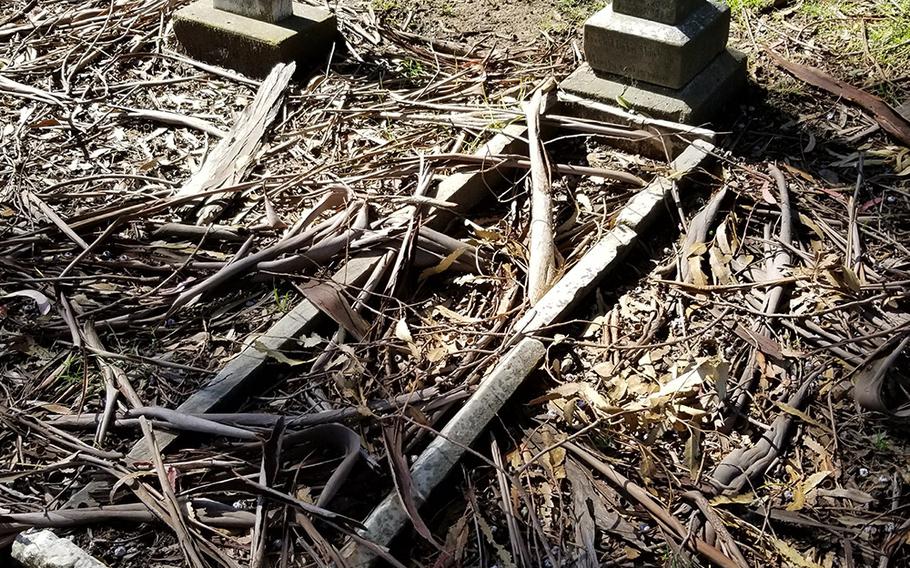 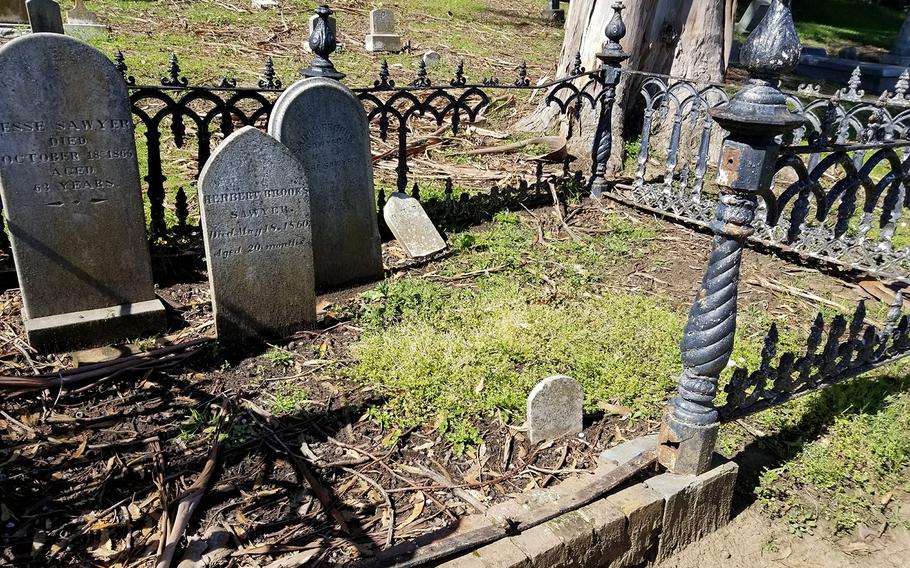 Between 1858 and 1921, the Mare Island Naval Cemetery in Vallejo, Calif., had 860 veterans buried there. In addition, nearly 100 plots at the site are the graves of military spouses, civilians who worked on the island, children and others. One of a few civilian family plots, the Sawyers, is surrounded by the remnants of an iron railing. The Sawyers were the base’s first shopkeepers and lived in one of Mare Island’s first homes. Their grandson, also buried there, died at 20 months. (Photo courtesy Thomas Jamison)

A bit of a world traveler, Parrott was exploring a former military base in the San Francisco area early last year when he came across the Mare Island Naval Cemetery, the oldest military graveyard on the West Coast.

The landscape is marked by patches of weeds, dead leaves and bark, invasive roots, and neglected pepper and eucalyptus trees. Threatened by sinkholes, falling headstones from the 19th century are held up by logs. Stone work is crumbling and a white picket fence has darkened over time.

“It was a disgrace,” Parrott, 77, who lives in the northern Virginia, said of his March 2017 visit to the graveyard. “My first reaction was, what deplorable conditions for a veterans cemetery.”

Parrott now had a mission.

He reached out to veterans, volunteer organizations and media in the Bay Area. He contacted military personnel and officials at the Department of Veterans Affairs. He also traveled to Capitol Hill.

More than a year later, momentum is building behind the plan to get help for Mare Island Naval Cemetery, with support growing for two newly introduced bills in Congress. The coalition of crusaders pushing for the move have seen increasing attention for the cemetery, where 860 servicemembers and veterans, mostly from the Navy and Marine Corps, were buried between 1858 and 1921. The site includes the graves of three Medal of Honor recipients and veterans from the War of 1812, Civil War and World War I.

The cemetery also has nearly 100 plots dedicated to military spouses, children and others, including Anna Arnold Key, the daughter of Francis Scott Key, who authored the Star Spangled Banner.

The cemetery was maintained by the neighboring Mare Island Naval Shipyard until it was closed through the Base Realignment and Closure Act in 1996. That year, the cemetery’s care was transferred to the city of Vallejo, Calif., which hasn’t had the funds to upkeep the burial grounds. The waterfront community, which is located in the North Bay region of the San Francisco area, has fallen into tough financial times, emerging from a yearslong bankruptcy proceedings in 2011.

For years, care of the cemetery has been left largely in the hands of volunteers, which includes members of the Mare Island Historic Park Foundation. Peggy O’Drain, a foundation volunteer and local historian, told a local publication several years ago that the cemetery’s repairs and maintenance could cost $2 million or more to start.

Now, Parrott and other veterans are working towards a legislative fix that would bring the cemetery under the VA’s National Cemetery Administration, which maintains military burial grounds in at least 39 states and 33 other sites. Since their work began early last year, they’ve seen an online petition to push for the move grow and congressional members introduce legislation.

“I believe that once many of our fellow citizens …find out about the condition of this sacred place, they will demand that honor must be restored for our veterans and their neighbors buried there,” said Eric Byrns, a 57-year-old Navy veteran who was based at Mare Island in the 1980s. “I hope to see our leaders return these grounds, to place them under the control of [the VA] as our other veterans cemeteries are. I am confident that when the decision-makers are made aware of this noble cause, then proper action will be taken to rebuild this beautiful place.”

Nestor Aliga, a Marine Corps and Army veteran who lives in Vallejo, met Parrott as he lobbied for the cemetery and soon after realized it was “an obvious injustice.” Aliga, 62, started an online petition through Change.Org (https://bit.ly/2IOd99U) that has since collected more than 55,000 signatures asking for President Donald Trump and VA officials to take over the graveyard’s care.

Mare Island Naval Cemetery’s “deplorable condition is a shocking disgrace to the honorable service, uncommon valor, and selfless sacrifice of our courageous veterans buried there and, even worse, to the dignity of our great nation,” Aliga said.

Thompson’s legislation has garnered endorsements from the American Legion, Veterans of Foreign Wars, the Disabled American Veterans and the U.S. Navy League. On Thursday, AMVETS also endorsed Thompson’s bill, which directs the secretary of Veterans Affairs to reach an agreement with the City of Vallejo to take over control of the cemetery in an effort to provide for restoration and maintenance of the historic graveyard.

“Ensuring the sanctity of the final resting place of our veterans is integral to respecting their service. I introduced this legislation to ensure the more than 800 veterans buried at the Mare Island Cemetery are properly honored and I’m humbled to have the support of AMVETS as we continue our fight to restore and maintain this landmark,” Thompson said following the AMVETS endorsement. “We must ensure the cemetery is preserved for generations to come so we can properly honor the sacrifice of our nation’s veterans.”

AMVETS said the legislation would be key to correcting a “national disgrace.”

“AMVETS applauds Rep. Thompson for introducing his bill to honor and preserve the memory and legacy of the veterans interred at the Mare Island Naval Cemetery, including three Medal of Honor recipients,” AMVETS National Commander Marion Polk said. “That the federal government provided no funding for the upkeep of these heroes’ final resting place when it closed the base in ‘96 has been nothing short of a national disgrace ever since. AMVETS strongly believes Congress must act swiftly to enact this bill and transfer responsibility for the cemetery’s upkeep to the Department of Veterans Affairs, where it belongs.”

The VA said Tuesday that it assisted Vallejo in preparing an application with the Department of Defense’s innovative readiness training program, which would allocate military funds and manpower for restoration of the cemetery. If approved, the city could receive funding for the effort for the upcoming fiscal year that begins Oct. 1.

It also is ready to offer direct assistance in replacing government headstones, as it would for any cemetery where veterans are buried, said Jessica Schiefer, a VA spokeswoman.

“VA has helped the city to meet its responsibility to improve the conditions of the Mare Island Cemetery in a number of ways,” Schiefer said in a statement. “If the project is approved, (the Department of Defense) would match a military (department or unit) with the project and work would start in fiscal year 2019.”