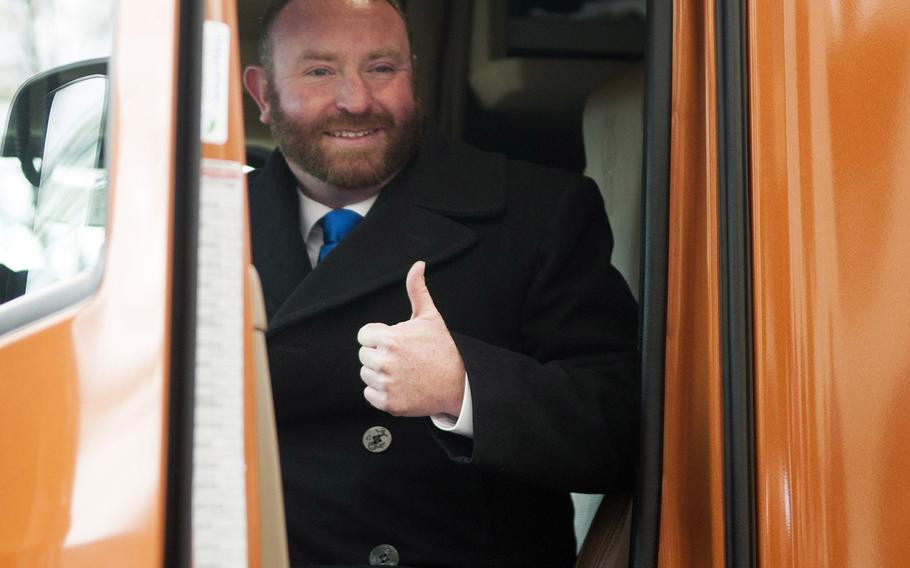 Buy Photo
Troy Davidson, a Navy veteran from Pensacola, Fl., poses in his new T6680 semi-truck Friday, Dec. 16, 2016 outside the U.S. Chamber of Commerce Foundation in Washington. Davidson won the truck, worth $150,000, in a competition put on by Hiring our Heroes, Kenworth and FASTPORT. ( Nikki Wentling/Stars and Stripes)

Buy Photo
Troy Davidson, a Navy veteran from Pensacola, Fl., poses in his new T6680 semi-truck Friday, Dec. 16, 2016 outside the U.S. Chamber of Commerce Foundation in Washington. Davidson won the truck, worth $150,000, in a competition put on by Hiring our Heroes, Kenworth and FASTPORT. ( Nikki Wentling/Stars and Stripes) 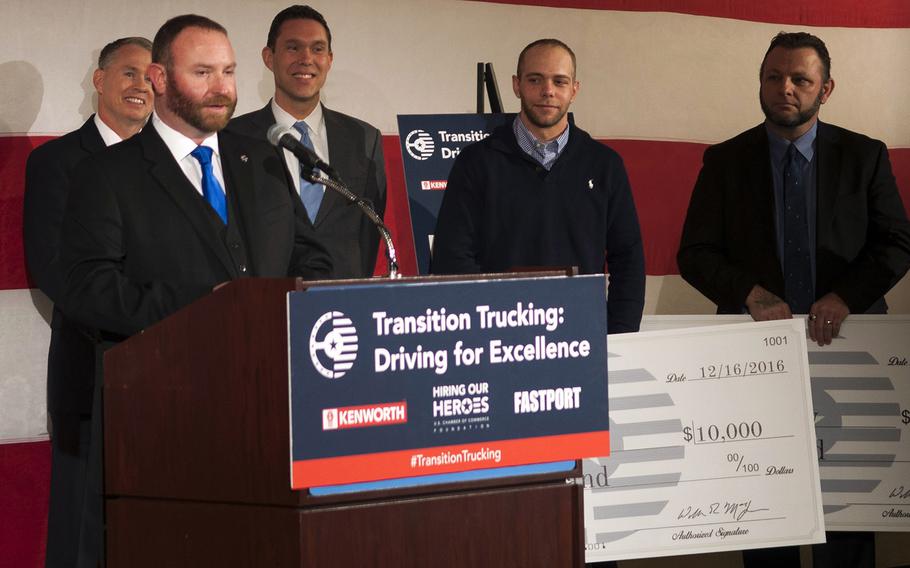 Buy Photo
Navy veteran Troy Davidson addresses a crowd inside the U.S. Chamber of Commerce Foundation after being announced the winner of a $150,000 Kenworth semi-truck Friday, Dec. 16, 2016. Kevin Scott, an Army veteran, and Russell Hardy, a veteran of the Army and Navy, stand behind Davidson holding $10,000 checks they were awarded as runners-up in the competition, put on by Hiring our Heroes, Kenworth and FASTPORT. (Nikki Wentling/Stars and Stripes)

WASHINGTON – After being announced as the winner of a $150,000 semi-trailer truck at the U.S. Chamber of Commerce Foundation on Friday, Navy veteran Troy Davidson called out an emotional “thank you” as his family cheered from the back of the room.

“This is life-changing,” said Davidson, of Pensacola, Fla. “I’m overwhelmed and humbled.”

Hiring our Heroes – a part of the U.S. Chamber of Commerce Foundation – started the competition this year to choose one veteran to receive a T680 Kenworth truck. About 40 people were nominated, said Eric Eversole, president of Hiring our Heroes. About 600,000 votes were cast online to choose the finalists.

Russell Hardy, an Army and Navy veteran from El Paso, Texas, and Kevin Scott, an Army veteran from Gulfport, Miss., were the runners-up. Each received $10,000.

Leaders of Hiring our Heroes, an initiative to help veterans find civilian jobs, used the event to promote the trucking industry to transitioning servicemembers seeking employment.

Kevin Burch, chairman of American Trucking Associations, said the trucking industry employs about 3.5 million drivers. The demand for more drivers is high, he said. An additional 1 million will be needed over the next 10 years.

“What this allows us to do is help young, transitioning servicemembers or veterans understand what the opportunities in this industry look like,” Eversole said. “It’s a natural fit for a lot of our servicemembers; it’s a long-term economic opportunity right out of the gate.”

Davidson, Hardy and Scott, with their families, gathered in downtown Washington on Friday morning. Following the announcement that Davidson won, his father cried and wrapped him in a hug. The group stepped outside of the Chamber of Commerce Foundation, directly across from the White House, where the semi-trailer truck was waiting.

Davidson lifted himself into the driver’s seat, honked the horn and smiled for photos. His extended family, most of whom came from Michigan, joined him.

A selection committee looked at the veterans’ military service record and their performance record in the trucking industry to choose the winner.

Davidson was a jet engine mechanic in the Navy and worked as a mechanic for the Blue Angels, the Navy flight demonstration squadron. He’s a recipient of the Navy Good Conduct Medal and the Navy Achievement Medal.

Davidson works as a truck driver at Werner Enterprise, driving one of the company-owned trucks. He wants to become an owner-operator with Werner, driving his own truck.

“You have to realize, most things in your house, everything you eat, the vehicles you drive, the clothes you wear, everything has been brought to you – one way or another – by a truck driver,” Davidson said. “If it wasn’t for the guys that made those sacrifices that aren’t home on the holidays, that have to drive in inclement weather, you wouldn’t have that.”