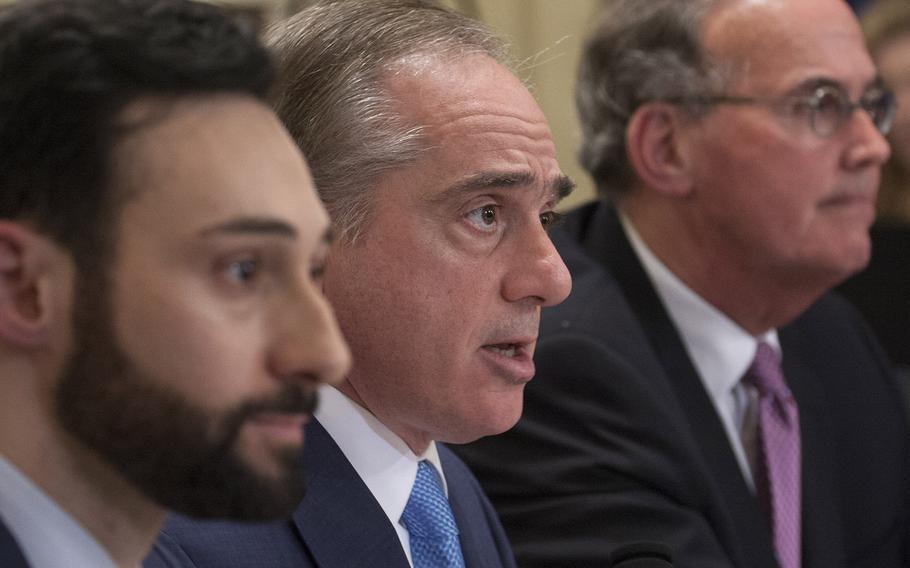 However, veteran groups adamantly oppose VA’s plan to fund the Choice replacement plan by cutting disability compensation paid through the Individual Unemployability (IU) program to 208,000 severely disabled veterans, those ages 62 and older who also are eligible for at least minimum Social Security benefits.

In testimony before the Senate Veterans’ Affairs Committee, Shulkin unveiled his replacement for Choice, titled the Veterans Coordinated Access and Rewarding Experiences (CARE) Program. CARE would have the familiar features of a managed care program, with VA health care providers assigned to patients and deciding, based on clinical needs, whether to treat patients inside VA or refer them to an outside network of private-sector care providers under contract to VA.

VA is asking Congress to scrap the “arbitrary” mandates established under Choice to offer access to private-sector health care if veterans reside more than 40 miles from a VA hospital, or a VA clinic staffed by a primary care provider, or if they must wait longer than 30 days for access to VA care after seeking an appointment.

Shulkin insisted under intense grilling by Sen. Mike Rounds, R-S.D., that patient choice to seek community care or to stay in VA would be preserved under CARE because, he said, VA care providers wouldn’t be implementing the program properly if they simply mandated the source of care for patients.

Rounds suggested veterans in his rural state finally are seeing the Choice plan work for them, relying now on local health care providers because they reside more than 40 miles from a VA facility, “which is a lot of South Dakota.”

If those same veterans are required again to consult with a VA provider, either in person or by phone, to get permission to seek outside care, “it doesn’t sound like it’s a joint decision,” Rounds said.

Shulkin insisted it will be. VA will give guidance to providers to make it so.

“When I treat patients,” said Shulkin, an internist who still sees patients as a VA physician, “I listen to my patients and I understand what their needs are. … I think what good doctors and providers do is they recognize it is a joint decision.”

Also, under the CARE plan, if a local VA facility can’t treat a patient, the VA provider would grant permission to use the outside provider network, either inviting the patient to find a community care provider or providing help with a referral.

Rounds wasn’t persuaded that patients under CARE wouldn’t be pulled back into VA and have to rely again on long trips to VA hospital or clinics. He noted that Congress enacted a law that, starting in 2010, required VA to cover private-sector emergency care of veterans enrolled in VA, even if they had other health insurance.

Appellate courts have ruled in the Staab case that VA ignored the law and kept regulations in place that denied emergency care reimbursements to thousands of veterans because they had other health insurance. Many of those treated for emergency conditions not related to their time in service got stuck with hefty bills.

The fact that VA continues to appeal the Staab decision suggests that the department will seek to control community-based health care costs, regardless of the impact on patients, Rounds told the VA secretary.

Shulkin said he has ordered regulations prepared to enforce the Staab decision, but that will take up to nine more months and it might be a year before payments can begin. Meanwhile, Shulkin said, VA is appealing the decision because $2 billion is at stake, money VA needs to serve veterans who have greater needs.

“Everybody at VA now knows they are to write those rules and get this fixed as soon as possible,” Shulkin said. “We are agreeing to pay these bills on veterans who are not service-connected and who have other health insurance.”

But, said Shulkin, “I’m going to take away from other parts of my budget that should be helping veterans that really need our help, that don’t have other health insurance and are service-connected. So, from the policy point of view, I believe the court made the wrong decision, and I’m going to fight that out in court.”

Representatives of the American Legion, Veterans of Foreign Wars, Disabled American Veterans and Paralyzed Veterans of America endorsed Shulkin’s vision to drop Choice and its metrics of wait times and geographic distance, and use clinical need instead to determine whether to refer patients to community care.

These groups, however, urged Congress and the VA to produce annual Department of Veteran Affairs budgets that fully resource VA hospitals and clinics, so the department is able to care for more patients while also developing the kind of high-performing, integrated networks of community providers, federal agency partners and academic institutions that last year’s Commission on Care endorsed.

These veteran groups said they believe Shulkin shares that vision, but VA can’t be allowed to fund any of it by cutting IU compensation or other benefits.

Shulkin said he heard their “strong concerns” about the IU cuts and would take them “very seriously. Nobody wants to be taking away unnecessary benefits from veterans, and certainly not putting them into poverty,” he said.

But, he said, mandatory VA benefits have climbed by $12 billion in the past two years, which justified a review to see if current benefits operate as intended.

Some senators on the committee embraced the CARE plan with enthusiasm, including Chairman Johnny Isakson, R-Ga. The ranking Democrat, Sen. Jon Tester, of Wyoming, called the current Choice plan “a train wreck” that “hasn’t improved access. In fact, it’s made it worse. And in the process, it’s caused a lot of veterans and community [health care] providers to lose faith in the VA.”

But Tester and especially Sen. Patty Murray, D-Wash., are worried that portions of VA’s 2018 budget request and the CARE plan take dangerous steps toward privatizing VA care, despite Shulkin’s assurances that is not a goal. Tester noted the budget would boost funding next year for community-based care by 33 percent and for VA hospitals and clinics by only 1.2 percent.

“It doesn’t take very many budgets like that and … we’re privatizing the VA,” said Tester.

Murray blasted a series of pilot programs VA seeks to fund as part of CARE to test concepts backed by advocates for privatizing veterans’ care and dismantling VA. One would create a VA health insurance plan as an alternative to VA care.

“I want you to know,” she told Shulkin, “I do not support [these pilot programs] and I will fight them with everything I have.”