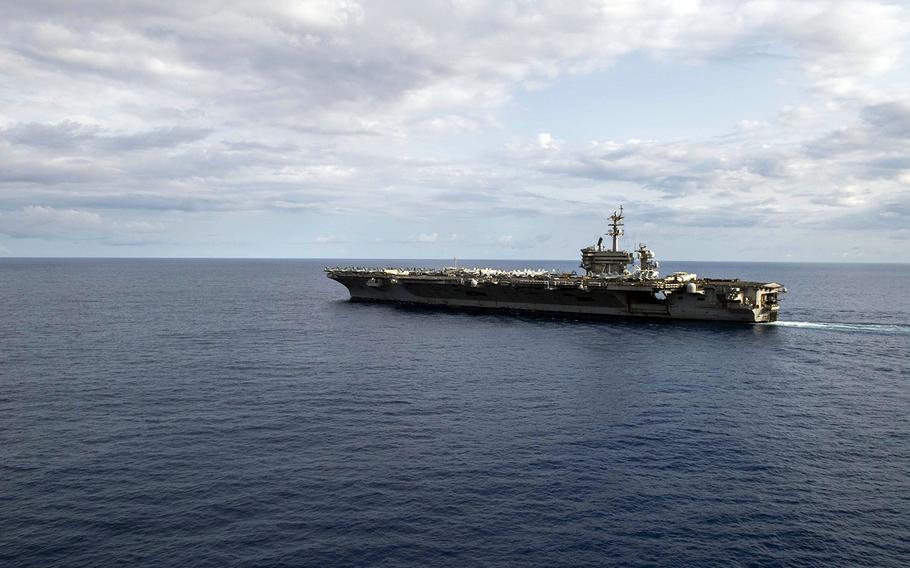 WASHINGTON — A sailor assigned to the USS Theodore Roosevelt died Monday from the coronavirus, the first death of the nearly 600 confirmed cases among the crew in an outbreak that has kept the aircraft carrier docked in Guam and weighed down in controversy.

The Navy said in a statement that the sailor had been in intensive care on Guam, where the warship arrived March 27 as the coronavirus spread throughout the carrier.

The Roosevelt’s former commander, Capt. Brett Crozier, raised alarms about the outbreak aboard the ship with an emailed letter to at least 20 service officers requesting assistance for his crew in battling the virus. Crozier warned in his letter that the outbreak could kill some sailors, and “if we do not act now, we are failing to properly take care of our most trusted asset — our sailors.”

The letter was leaked to the media and Crozer was fired two days later on April 2 by then acting Navy Secretary Thomas Modly. At the time, there were about 114 Roosevelt sailors who tested positive for the coronavirus.

As of Monday, there are 585 Roosevelt sailors with positive tests for the virus. Most of the about 4,800 member crew has been tested, with 3,921 receiving a negative test result. About 4,021 sailors have been transferred from the ship to Guam. The sailor who died Monday tested positive for the coronavirus March 30 and was taken off the ship and placed into isolation with four other sailors, the Navy said.

"The entire [Defense] Department is deeply saddened by the loss of our first active-duty member to [the coronavirus],” Defense Secretary Mark Esper said in a statement. “Our thoughts are with the family of the USS Theodore Roosevelt sailor who lost his battle with the virus today. We remain committed to protecting our personnel and their families while continuing to assist in defeating this outbreak."

Esper said Friday if Navy leadership recommended Crozier be reinstated as commander of the Roosevelt, he was open to the idea. Esper’s statement came in the aftermath of Modly’s trip to Guam and his disparaging comments about the captain.

In the days after firing Crozier, Modly traveled to the island and gave a speech to the crew of the Roosevelt, who showed unwavering support for the captain. In Modly’s address, he called Crozier “too naïve or too stupid to be the commanding officer of a ship like this.”

Modly quickly came under mounting criticism for his comments about Crozier and he resigned his post as acting Navy secretary on April 7.

Two days later, the Roosevelt sailor was found unresponsive during a medical check at about 8:30 a.m. and other sailors started CPR while emergency responders were notified, according to the Navy. The sailors who are isolated receive twice daily checks by Navy medical personnel.

“We mourn the loss of the sailor from USS Theodore Roosevelt who died today, and we stand alongside their family, loved ones, and shipmates as they grieve. This is a great loss for the ship and for our Navy,” Adm. Mike Gilday, chief of naval operations, said in a prepared statement. “My deepest sympathy goes out the family, and we pledge our full support to the ship and crew as they continue their fight against the coronavirus. While our ships, submarines and aircraft are made of steel, sailors are the real strength of our Navy.”

The Roosevelt sailor, whose name will not be announced until the individual’s family is notified, is the second service member to die from the coronavirus. On March 28, Army Capt. Douglas Linn Hickok, 57, with the New Jersey National Guard also died from the coronavirus. He was preparing to activate with the Guard as a physician assistant in response to the pandemic when he became sick.

As of Monday, about 2,941 service members have tested positive for the coronavirus, according to the Defense Department. Of the services, the Navy has been hit hardest by the pandemic with 1,056 cases of the virus.

And Air Force Gen. John Hyten, vice chairman of the Joint Chiefs of Staff, said Thursday that the Navy should expect more ships to have outbreaks of the coronavirus.

The Navy has two other aircraft carriers dealing with the coronavirus.

The USS Nimitz, now in port in Bremerton, Wash., has had one sailor placed in isolation off the ship after showing symptoms. However, that individual’s test has come back “inconclusive.” Another sailor assigned to the ship was on leave in another state in early March when that person also tested positive and has not returned to the Nimitz.

The USS Ronald Reagan is preparing for deployment from Yokosuka Naval Base in Japan, where it has been undergoing maintenance. More than 1,000 sailors from the Reagan and its strike group were bussed to Yokota Air Base and Naval Air Facility Atsugi last week to complete a 14-day isolation before they deploy.

“I am keenly aware of the dedication and commitment of our sailors and Marines in service to our nation – in war, peace, and this unfamiliar time of [the coronavirus],” said James McPherson, the new acting Navy secretary. “I will continue to do everything in my power to support their efforts and safety as we respond as one nation to this pandemic.”