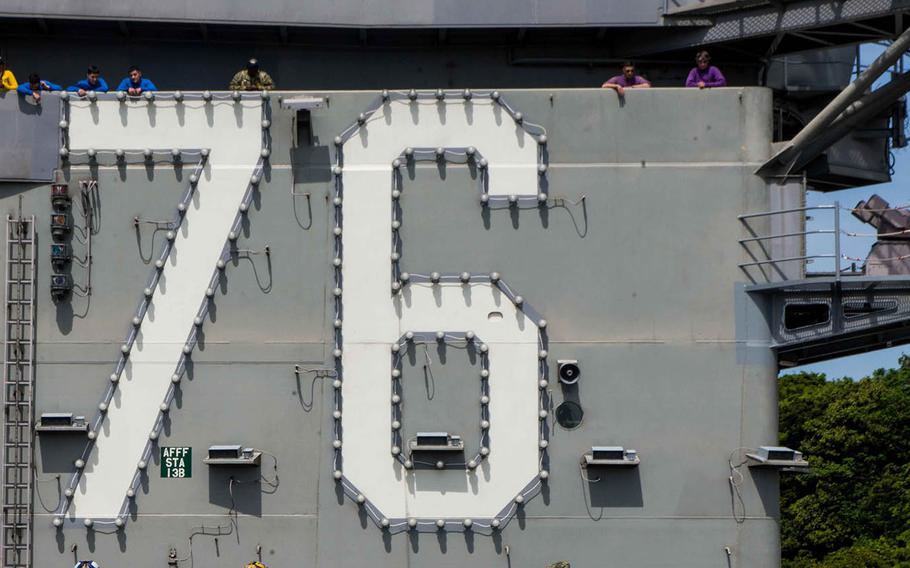 An unnamed USS Ronald Reagan sailor has been accused of violating Japan's Narcotics and Psychotropics Control Law in relation to a drug-smuggling case. (Kenneth Abbate/U.S. Navy)

YOKOSUKA NAVAL BASE, Japan – Japanese police have accused a 24-year-old USS Ronald Reagan sailor of smuggling drugs into the country.

The Navy and Naval Criminal Investigative Service are cooperating with Japanese authorities in an investigation regarding “a U.S. service member's alleged involvement in drug distribution,” Yokosuka Naval Base spokesman Jim O’Donnell told Stars and Stripes Monday.

“The Navy takes any and all illegal drug use very seriously and has a zero-tolerance policy for illegal drug use, possession or distribution,” said O’Donnell, who declined provide further details because of the ongoing investigation.

The incident is connected to an investigation that began in February regarding a possible drug ring involving at least 12 Yokosuka-based sailors suspected of buying, selling and using drugs such as LSD and ecstasy. Investigators are looking into whether they bought and sold the drugs over the internet, and if they distributed them to Japanese citizens off base, according to a February Wall Street Journal report.

The Navy confiscated a cellphone, computer and what it believes to be drugs from the sailor’s home, Asahi reported. The service is working with prefectural police in the investigation and has turned over information and documents to Japanese officials.

Japanese police decided not to arrest the sailor because they do not believe he will flee or destroy evidence since the Navy is involved with the investigation, according to the Asahi report.

The suspect is not in military custody at this time, O’Donnell said.

“The Sailor is performing military duties while awaiting the outcome of this investigation and is restricted to [Yokosuka Naval Base],” O’Donnell said.

The sailor’s name was not released because he has yet to be officially charged.