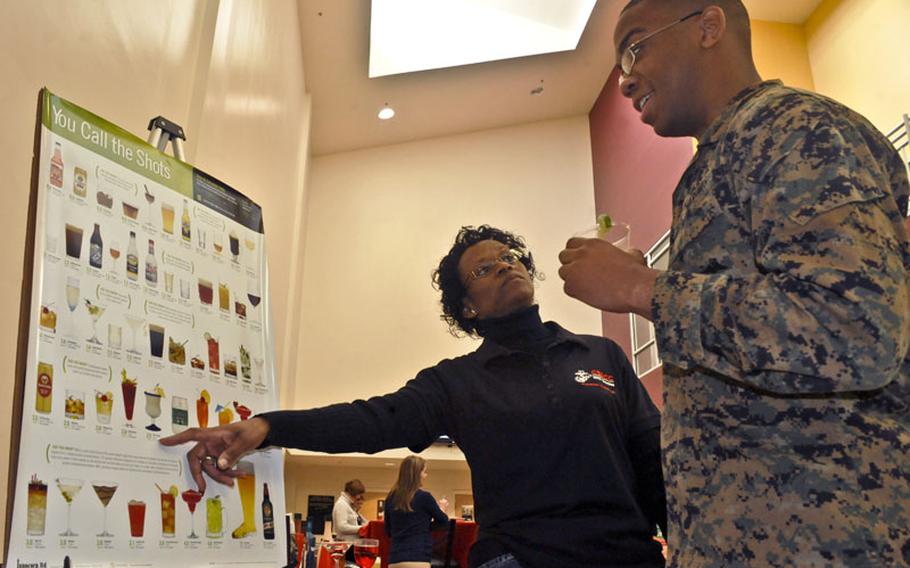 WASHINGTON &mdash; Thomas Brennan was still unloading his bags at his first duty station when he saw the other Marines drinking on the catwalks.

&ldquo;In a way, I expected it,&rdquo; he said. &ldquo;A bunch of people partying, having a good time, getting ready to go to war.&rdquo;

Brennan, now a sergeant who will be medically retired this month, said drinking and partying in the barracks isn&rsquo;t quite as obvious now. Marines know they will be punished if they get caught drinking underage or drinking hard liquor in the barracks, he said. But that doesn&rsquo;t mean the drinking has stopped. People just keep their doors closed, he said, and if the platoon sergeant is coming at 6:30 a.m. for inspection, &ldquo;that means all the evidence is gone by 6:15.&rdquo;

While some military doctors say they don&rsquo;t believe troops binge drink or abuse alcohol more than their civilian counterparts, a recent report by the Institute of Medicine called drugs and alcohol abuse among troops a &ldquo;public health crisis.&rdquo; A report released by the Army in January reported that 43 percent of active-duty soldiers had admitted binge drinking within a month of the survey and that 67 percent of the binge drinkers were 17 to 25 years old.

The military&rsquo;s alcohol-soaked culture plays out on weekends and on weeknights, in the apartments of noncommissioned officers, where subordinates guzzle liquor straight from the bottle; at bars in military towns, where recently promoted officers are expected to pick up the tab for the other officers in their command; in hotel rooms packed with underage servicemembers, where men and women wake up with hangovers and few memories of the night before; and at officers clubs and pubs around the world, where commanders buy rounds and rounds of beer to build camaraderie and esprit de corps.

It also shows up in war zones, where alcohol is prohibited but frequently comes hidden in mouthwash bottles or given to troops after battle. Brennan recalls the Marines in his unit &mdash; all ages &mdash; being given two beers and a shot to celebrate the Marine Corps birthday after the battle of Fallujah.

No one is required to drink &mdash; at least not exactly.

A West Point guide on the tradition of &ldquo;dining in&rdquo; &mdash; a formal dinner for members of a military unit &mdash; explains that while toasts &ldquo;are considered a mandatory part of any dining-in,&rdquo; participants are not required to drink or sip the wine, just to touch their lips to the glass.

Brennan said his first &ldquo;mess night,&rdquo; which is similar to a dining in, had only alcoholic &ldquo;grog,&rdquo; and everyone was ordered to drink it during the dozens of toasts. At his most recent mess night, in 2010, there was a nonalcoholic grog option.

&ldquo;That was the first time in my Marine Corps career I saw a non-alcoholic option,&rdquo; he said.

Jason Hansman, an Army Reserve veteran who runs the health and mental health programs for Iraq and Afghanistan Veterans of America, said the military&rsquo;s drinking culture is evident at mandatory social events, unit functions and, on a more informal basis, after work.

&ldquo;It&rsquo;s a way to deal with stress,&rdquo; he said, a way to unwind. The problems arise when it becomes a way to self-medicate for issues like depression or post-traumatic stress disorder.

&ldquo;One of the primary ways we as Americans try to get rid of stress is by drinking,&rdquo; Hansman said, and that idea is accepted and amplified in the military.

The service branches have recently taken steps to identify and address alcohol and substance abuse. Troops and their families are asked about their alcohol use at every medical appointment. The Army is testing a program that allows confidential alcohol treatment.

Navy Capt. Michael Colston, director of mental health policy for the Defense Department&rsquo;s Office of Clinical and Program Policy, said the training has changed dramatically from when he was first exposed to it in 1986.

Now, he said, it is more frequent and more specific.

&ldquo;We take advantage of opportunities to tell folks that treatment is available,&rdquo; he said.

Still, Brian Lewis, a former Marine, said the training didn&rsquo;t work very well for him. Instead of getting the time he needed to decompress after he returned from a deployment to Iraq in late 2007, he said he was subjected to a week of PowerPoint slides.

&ldquo;I never truly had time to sit down and deal with events,&rdquo; said Lewis, who now works with and leads group therapy sessions at a mental health hospital. &ldquo;I turned to drinking each night. My idea was to force out the emotional meltdown I felt was coming, and it also aided me in getting to sleep.&rdquo;

Lewis tried working with a substance abuse counselor on base at Camp Lejeune, N.C., but said she told him to &ldquo;find Jesus.&rdquo; Finally, he asked his psychiatrist to help him check into rehab. The month there was &ldquo;incredibly helpful,&rdquo; he said.

Hansman proposes making mental health training a part of basic skills training, &ldquo;just like how we learn how to tear down an M-16 and put it back together.&rdquo;

&ldquo;One of your greatest weapons &mdash; and it sounds cheesy &mdash; is your brain,&rdquo; he said. &ldquo;That&rsquo;s what they need to start instilling in soldiers: Take care of yourself. And commanders and NCOs need to make sure that&rsquo;s OK and afford time for people to actually do that.&rdquo;

In recent years, the military has tried to shift away from alcohol, letting troops know &ldquo;it&rsquo;s OK not to drink,&rdquo; Colston said.

Charles Gould, program manager for the Navy&rsquo;s substance abuse rehabilitation program, said commanders on Navy ships try to alleviate the emphasis on alcohol during port calls by flying in people from the ports to talk about nonalcoholic recreational activities that sailors can participate in and tours they can take. They&rsquo;ve also changed the culture at official events, he said, partly by changing the rules so funding can&rsquo;t be used for alcohol.

Malone said a friend of hers is assigned to a unit in which the Friday night routine is usually &ldquo;mandatory fun&rdquo; at a bar &mdash; in which officers are expected to throw back a few beers with their co-workers and commander with an eye toward unit cohesion.

&ldquo;That doesn&rsquo;t necessarily send the best message,&rdquo; Malone said. &ldquo;And what happens with that, too, is your officers who are asked to go, it sends this message to the enlisted (sailors) that, &lsquo;Hey, look at these guys, there&rsquo;s nothing wrong with that.&rsquo; It is important to lead by example, and there&rsquo;s been that push, especially with alcohol, to try to do that.&rdquo;

Shoshana Pilip-Florea, deputy public affairs officer for the Navy&rsquo;s Bureau of Medicine and Surgery, said the culture &mdash; at least in the Navy &mdash; is definitely changing.

Commanders issue letters of caution to officers who were present when one of their sailors or Marines is involved in an &ldquo;alcohol-related incident,&rdquo; to remind them of their responsibility to set the example and prevent those problems.

Still, Hansman said first-line leaders are the key to changing the culture and addressing the problem, not commanders.

A noncommissioned officer talking to a younger soldier as a mentor and encouraging him to get help, would go a long way, Hansman said.

&ldquo;We don&rsquo;t want to stop [people from] drinking,&rdquo; he said. &ldquo;We want people to drink responsibly and not drink emotionally.

&ldquo;It&rsquo;s not a substitute for therapy.&rdquo;

The statistics cited by the IOM report are particularly grim &ndash; the percentage of active-duty servicemembers who reported binge drinking shot from 35 percent in 1998 to 47 percent in 2008. More recent statistics suggest some of the training may be taking hold. Diagnoses of alcohol abuse and dependency have been on a downward slope since 2008 and are now lower than 2000 levels, according to a June report from the Armed Forces Health Surveillance Center.

In the Air Force, the rate of alcohol-related incidents has dropped from 18.3 per 1,000 airmen in 2008 to 16.2 per 1,000 airmen, according to Maj. Deborah Sirratt, chief of the Air Force&rsquo;s Alcohol and Drug Abuse Prevention and Treatment clinical program. The number of alcohol-related incidents and driving under the influence of alcohol arrests in the Navy are also now lower than 2002.

Still, the stakes are higher for servicemembers than most civilians, Malone said.

&ldquo;It&rsquo;s not just [that] you wake up with a hangover in your bed in college. Their impairments can really result in some bad outcomes,&rdquo; she said. &ldquo;You have a job and a responsibility, and that includes watching out for your fellow Marines, fellow sailors, and it includes being able to do your job so you don&rsquo;t put anybody at risk. Especially over in Afghanistan, you can&rsquo;t afford to have your mind blurred when you&rsquo;re in situations where you really have to be at the top of your game.&rdquo;