US military has its own private resort at Walt Disney World 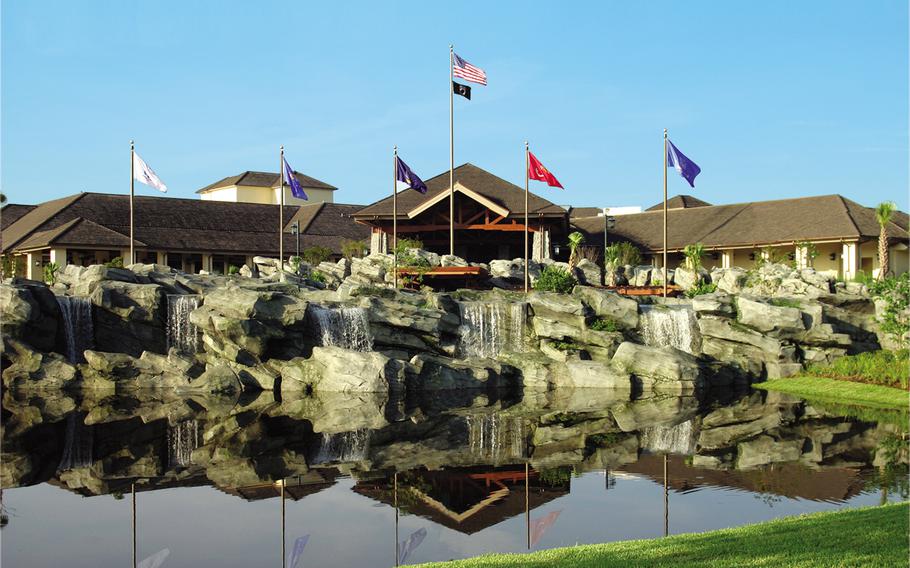 Atop an artificial rock formation, the flags of the Army, Navy, Air Force, Marines and Coast Guard flap in the breeze outside Shades of Green, a Department of Defense-owned resort for military members and their guests on the property of Walt Disney World. Inside, the clubhouse has a hunting-lodge feeling with exposed roof beams, hewn stone and a fireplace. (Courtesy of Shades of Green)

Atop an artificial rock formation, the flags of the Army, Navy, Air Force, Marines and Coast Guard flap in the breeze outside Shades of Green, a Department of Defense-owned resort for military members and their guests on the property of Walt Disney World. Inside, the clubhouse has a hunting-lodge feeling with exposed roof beams, hewn stone and a fireplace. (Courtesy of Shades of Green) 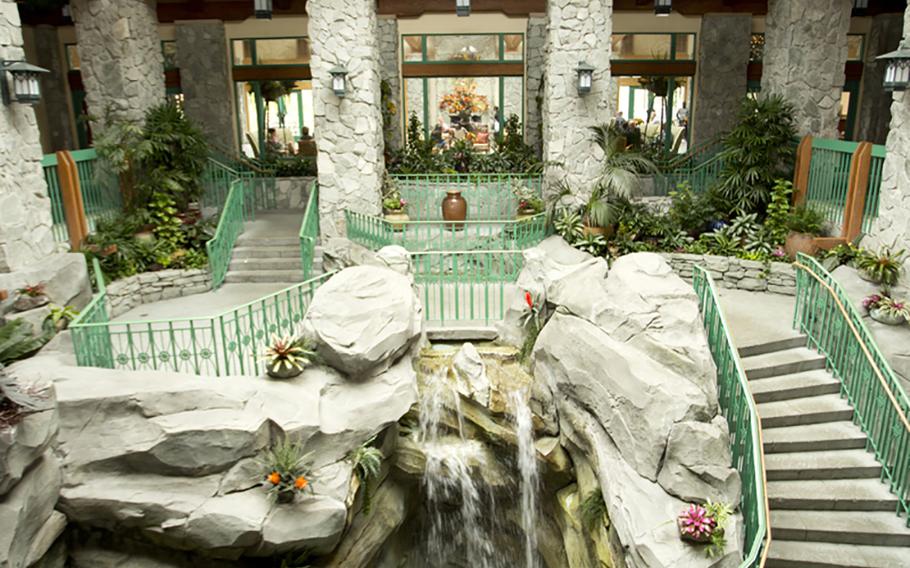 The main staircase at Shades of Green encircles a two-story-tall rock outcrop with waterfalls plunging through it. Shades of Green is a U.S. Department of Defense-owned resort in Lake Buena Vista, Fla., near Orlando, at Walt Disney World. (Courtesy of Shades of Green) 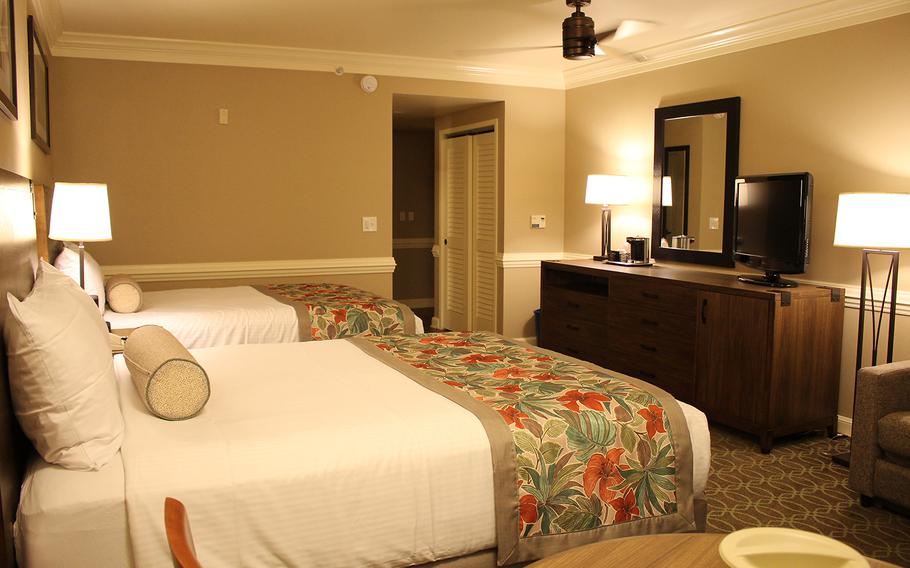 A standard room at Shades of Green sleeps five, with two queen beds and a sofa sleeper. At an average of 450 square feet, Shades of Green's rooms are among the roomiest to be found at Walt Disney World Resort. Each standard guest room features either a balcony or patio that overlooks the lush tropical grounds. Shades of Green also offers 11 family suite combinations. Five sleep up to six guests and six sleep up to eight guests. Because the number of family suites is limited, they reserve quickly. (Courtesy of Shades of Green) 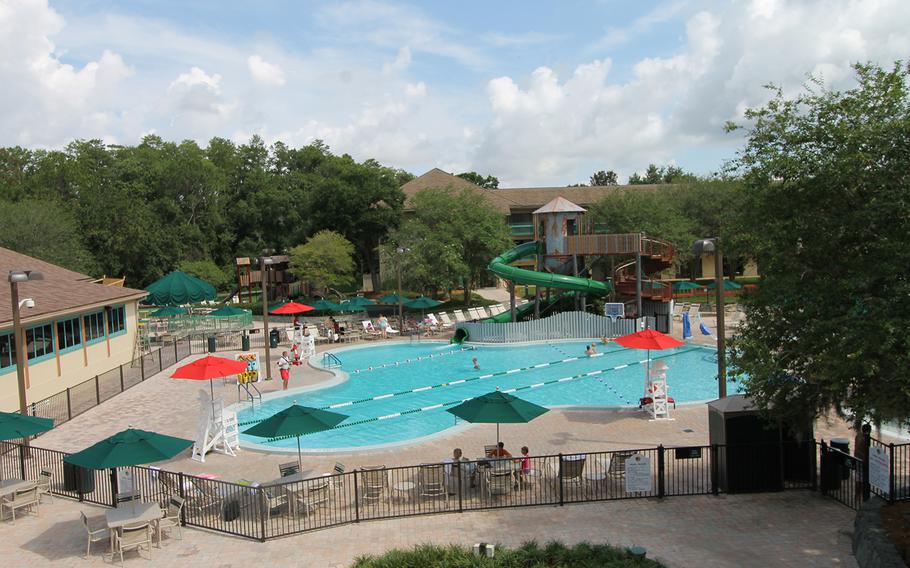 The main pool at Shades of Green is in the shape of Mickey Mouse's head and ears. Here children will find a splash area and slide as well as a dry playground. The pools at the resort are lightly used during the day, making them a great place for a park-weary parent (or child) to relax. Shades of Green is located in Lake Buena Vista, Fla., near Orlando, at Walt Disney World. (Courtesy of Shades of Green)

Wouldn’t it be nice to have your own, private resort in the midst of “The Happiest Place on Earth”?

You do if you’re a member of any branch of the U.S. military. That’s according to Edward Fagan, general manager of Shades of Green, a U.S. Department of Defense-owned resort on the grounds of Walt Disney World in Orlando, Fla.

“Disney is a place where dreams come true,” Fagan said. “It’s the number-one family tourist destination in the world. In its midst we have a beautiful resort. Every member of the military owns this resort. This is something that is provided by the U.S. military as a thank you for your service.”

Like other Armed Forces Recreation resorts worldwide, Shades of Green exists to give American troops and their families a place to enjoy rest and relaxation within the military community. The setting is 27 acres nestled between two PGA championship golf courses. The resort features a lodge-like clubhouse, heated pools and water slides, tennis courts, a poolside sports bar, video arcade, fitness facility, spa (offering makeovers for would-be princesses and pirates), fine and family dining, wedding facilities and indoor parking. The feeling is expansive, family oriented and carefree, and the setting is tropical, with rooms featuring balconies or patios with sweeping views of -- as the name implies – lots of green.

“For somebody who just got 13 inches of snow at home, this is a way to get a change of scene,” said Fagan. “Here, there’s no question that you’re in a tropical environment. We get generations of vacationers, from enlisted to officers to retirees.”

Although the green in the resort’s name originally came from the shades of green in the camouflage uniforms of all services when the Army bought the resort, there’s another kind of green that is very much in focus: the cost of a family vacation to Disney World and its adjoining parks. Since 2007, the cost of one-day adult tickets for Walt Disney World in the off-peak season has increased 51 percent, to $113, according to the Los Angeles Times. Add the cost of tickets for each family member to the expense of meals, lodging, parking and souvenirs over several days and a vacation at the Disney properties in Orlando can quickly get into many thousands of dollars.

Shades of Green promotes itself as a more affordable alternative, with discounted park tickets and free transportation to the parks. The resort also offers an AAFES store; a gift shop offering souvenirs at lower-than-Disney prices; parking for $7 a day and frequent meal-and-room specials. Room rates are tiered according to rank, starting at $109 for a standard room for E1-E6 and cadets. Lodging-and-meal deals are offered frequently.

“It’s possible to find a deal in Orlando that would match our room rates,” said Fagan, “but you wouldn’t be in the heart of the Disney property, and that adds the time and expense of driving and parking. And you wouldn’t be vacationing in a secure environment with like-minded people, and in a resort tailored to meet the needs of Wounded Warriors.”

Steve Bell, a retired Air Force chief master sergeant from Dayton, Ohio, has stayed at Shades of Green about 20 times since the year 2000. Some of the visits have been on family vacations, but most were for research as owner and blogger at http://www.militarydisneytips.com, where he has provided Disney discount information by military, for military since 2008. He has spent thousands of hours comparing military discounts at Disney properties, including those offered at Shades of Green. He said the resort can offer big savings, especially for those in the lower enlisted ranks, and at peak times of year, when room rates at other resorts at Walt Disney World spike. Room rates at Shades of Green remain the same year-round.

“One of the things I love about staying at Shades of Green is the way the guests interact with each other,” said Bell. “At Disney resorts, others just pass you by, but at Shades, others greet you in a friendly manner or even strike up conversations -- after all, we are all part of the same big family! It usually starts with ‘Where are you stationed?’ and ‘Where have you been?’ Disney is the perfect place for the military family to de-stress and forget about the real world. When you’re there, you aren’t thinking about the deployment you have coming up next month -- you’re just thinking about Disney.”

The resort’s beginnings go back to 1994, when the U.S. Army Morale, Welfare and Recreation department leased a Disney golf resort, thus establishing the only Armed Forces Recreation Center in the continental U.S. It was named Shades of Green to represent the services. MWR entered into a 99-year-lease with Disney and purchased the resort building in 1996. Disney still owns the land upon which it sits.

In its first years, the resort’s popularity caused it to fill to capacity early and often. Reservations were hard to get in busy seasons, with the waiting list sometimes as long as a year. So in 2002 the resort closed for almost two years for a $50-million remodel and expansion that included more guest rooms and family suites, meeting space, additional dining and more amenities. It reopened in March 2004 with 586 guest rooms, a new Italian restaurant, a gym and roomier ticket sales and gift shop areas.

In September, the resort will begin a second renovation — this one a $50-million room renovation of its Magnolia Wing, located in a part of the hotel that was built in 1971. The redo, which is scheduled to continue for 18 months to two years, will not be at taxpayer expense -- Shades of Green is self-sustaining; no outside funds are used in its operation or upkeep.

Aside from the update, the resort’s future involves a greater effort to reach out to new recruits and retirees.

“A family might visit four to five times in a lifetime – as a single service member, parent with children, and retiree,” said Annette Zeno, director of sales and marketing for the resort. “Shades of Green and Central Florida are the prefect destinations for military families of all generations to enjoy and create memories that will last a lifetime.”

WAYS TO SAVE SOME GREEN- Shades of Green, one of five Armed Forces Recreation Centers worldwide and the only one in the continental U.S., is a resort serving members of the U.S. Armed forces and their guests. It welcomes military members on active, reserve and National Guard duty, retirees and Dept. of Defense civilians. It is located in Lake Buena Vista, Fla., near Orlando, at Walt Disney World. Room rates are tiered according to rank, starting at $109 for a standard room for E1-E6 and cadets. For room rates, see www.shadesofgreen.org/roomrates.htm.

- A standard room sleeps five, with two queen-size beds and a sofa sleeper. At an average 450 square feet, Shades of Green’s rooms are among the roomiest to be found at Walt Disney World Resort. Each standard guest room features either a private balcony or patio that overlooks the tropical grounds. Shades of Green also offers 11 family suite combinations. Five family suites sleep up to six guests and six sleep up to eight guests. Because the number of family suites is limited, these rooms reserve quickly. The resort offers package deals including meals and lodging by season.

Shades of Green has guest rooms designed to meet the Americans with Disabilities Act (ADA) standards, plus larger elevators, bus transportation with lifts, and square poolside tables to accommodate wheelchairs.

- Disney is promoting a special “Salute” discount for active or retired members of the U.S. military. Choose between a four-day ticket for $209 and a five-day ticket for $224. Each includes an option to come and go each day of the ticket from the Magic Kingdom, Epcot, Disney’s Hollywood Studios and Disney’s Animal Kingdom. The tickets are available at Shades of Green’s Ticket and Attractions office (email ticketinfo@shadesofgreen.org) and at U.S. military bases.

- Shades of Green provides free bus transportation during park hours to the Walt Disney World Resort Transportation Center, which allows guests to hop on a monorail to the Magic Kingdom or Epcot. Buses are also available to Hollywood Studios, Animal Kingdom and Disney Springs. Ramps and lifts are available.

Round-trip shuttle transportation from Shades of Green to Universal Orlando costs $10 for adults and $5 for children ages 4 and up (children under 4 ride free). Orlando is the home of Sea World and many other Orlando-area attractions; discounted tickets can be purchased through Shades of Green’s Ticket and Attractions Office.

- The resort’s Survivors’ Family Discount Program provides a 50-percent discount off normal room rates for Gold Star families, or those who have suffered the loss of an active-duty family member. For complete information on the resort, tickets to attractions, visit www.shadesofgreen.org.

- Other Armed Forces Recreation Centers include the Edelweiss Lodge and Resort in Garmisch-Partenkirchen, Germany; the Dragon Hill Lodge in Seoul, South Korea; and the Hale Koa Hotel in Fort DeRussy, Hawaii. For information, go to www.armymwr.com/travel/armed-forces-hotels-resorts.