US military exercise in Georgia on anniversary of war with Russia 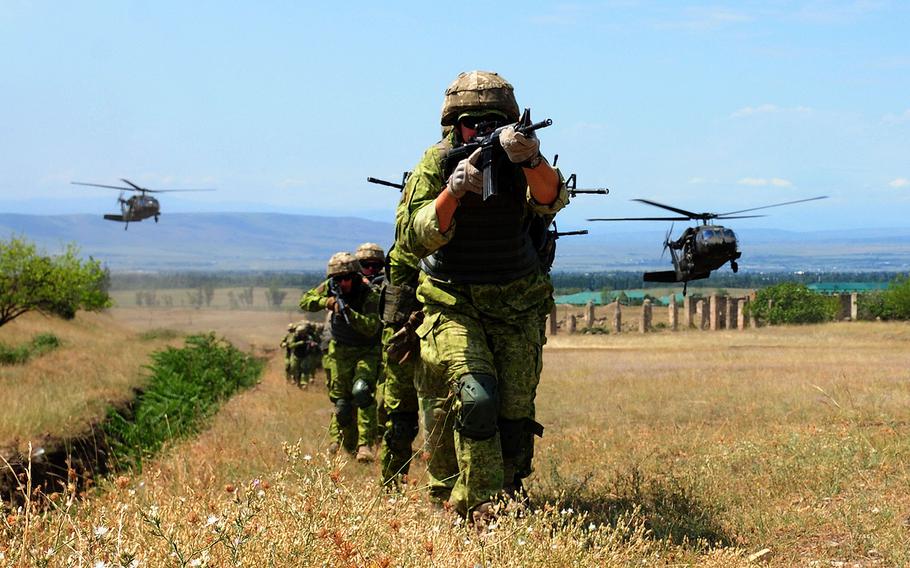 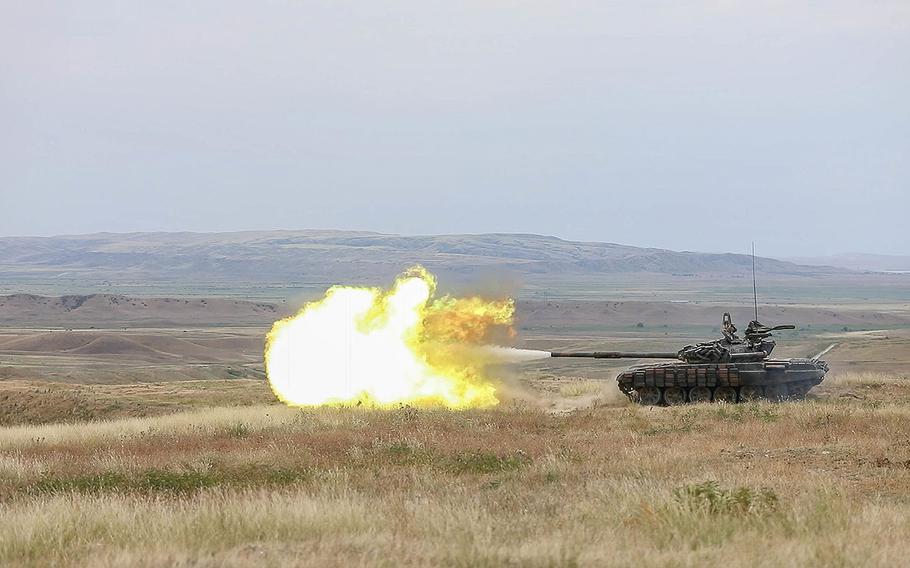 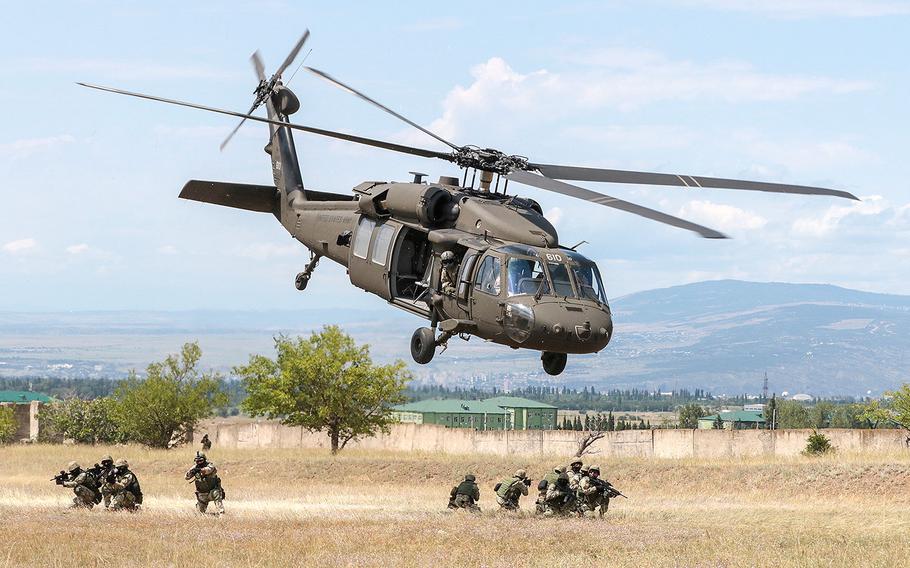 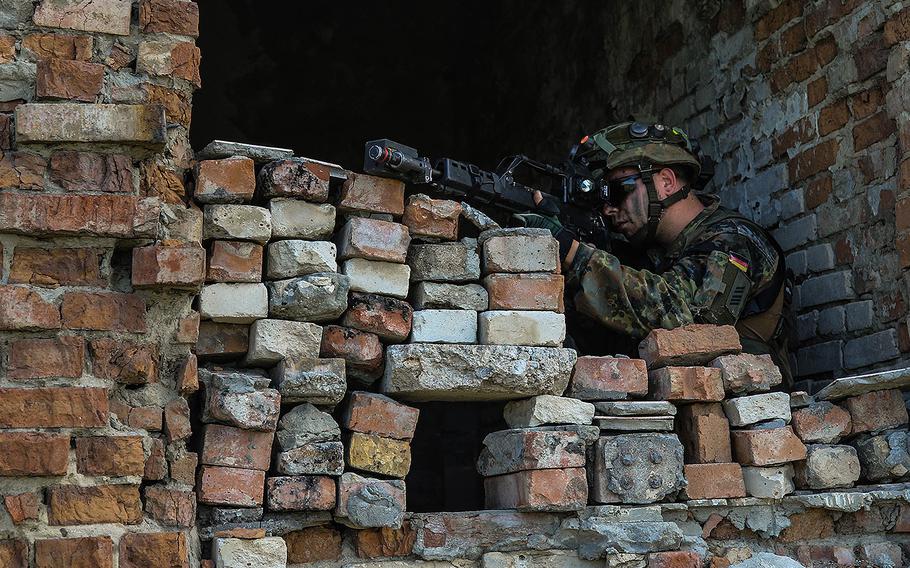 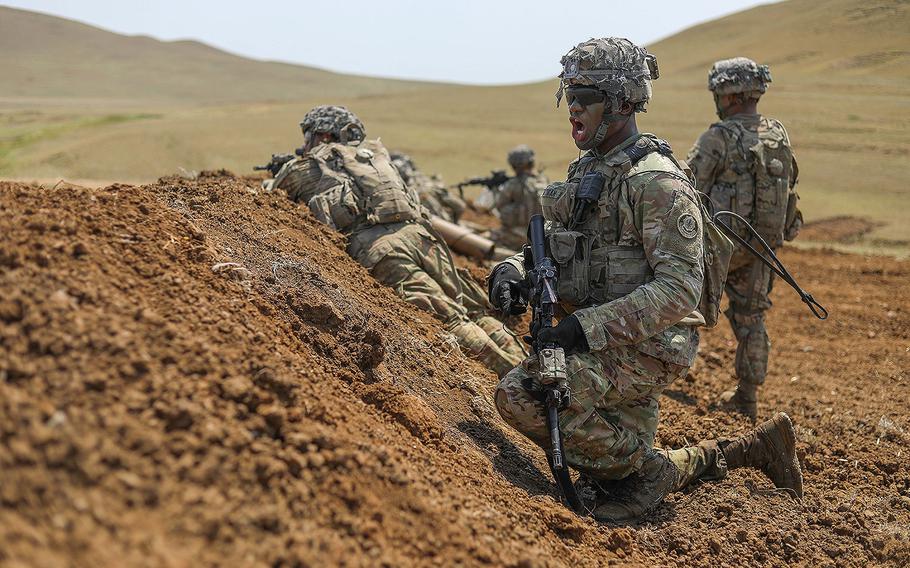 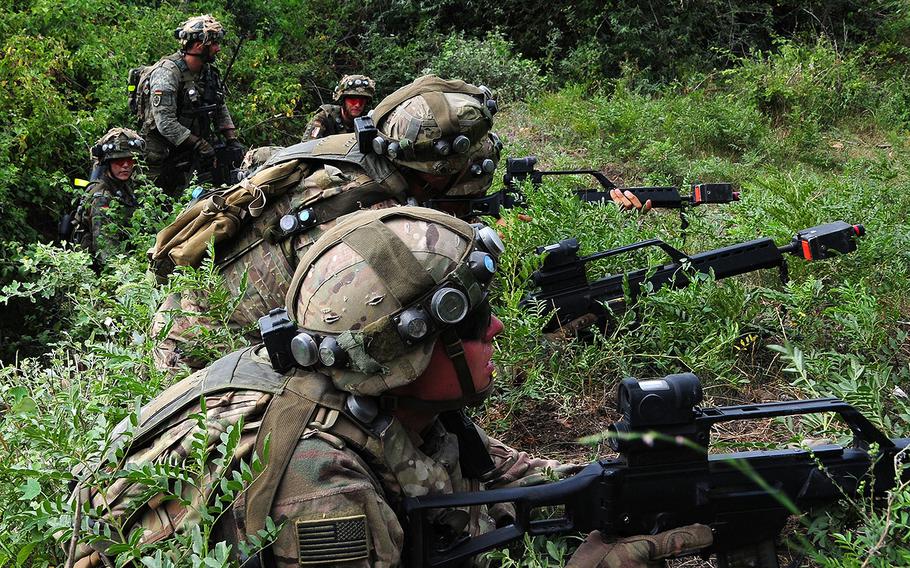 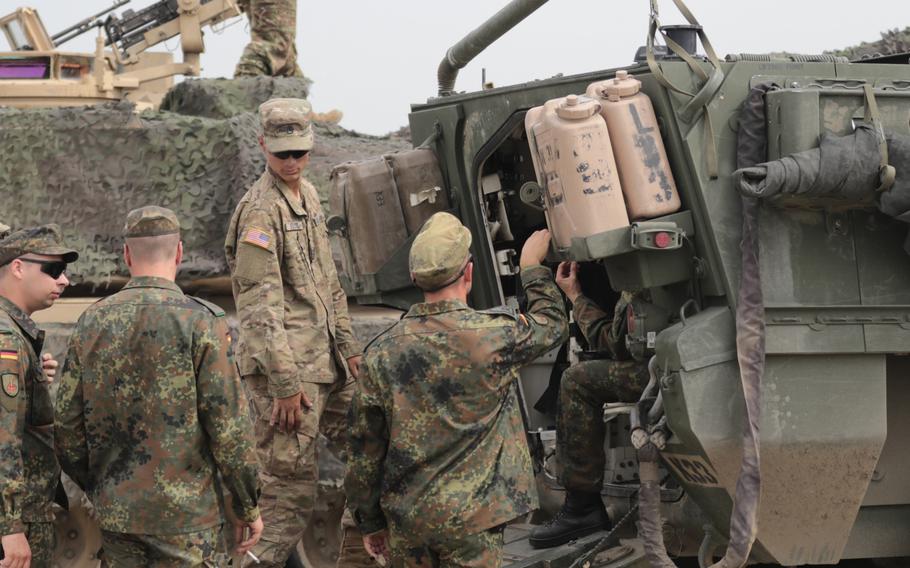 Staff Sgt. Keenan M. Kozak, a tank commander, listens to questions from German soldiers about the Stryker vehicle prior to the opening ceremonies of Noble Partner 18 at the Vaziani Training Area, Georgia on Aug 1, 2018. (R.J. Lannom Jr./U.S. Army) 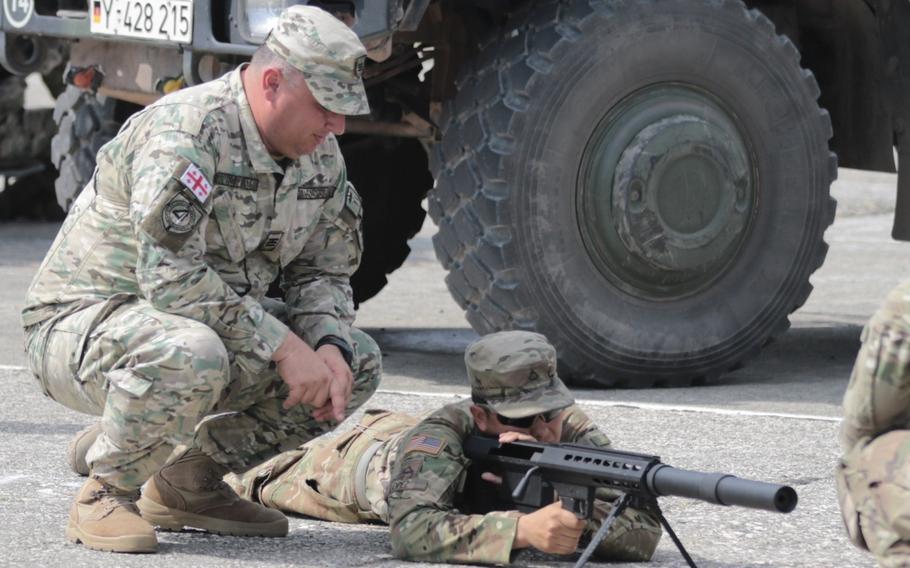 Pfc. Schuyler T. Lopez, an infantryman with the Vilseck, Germany based 2nd Cavalry Regiment, gets familiar with a Georgian PDShP2 anti-materiel rifle prior to the opening ceremonies of Noble Partner at the Vaziani Training Area, Georgia on Aug. 1, 2018. The U.S. military and Georgian Armed Forces have trained and fought together side by side in Iraq and Afghanistan for more than 15 years. (R.J. Lannom Jr./U.S. Army) 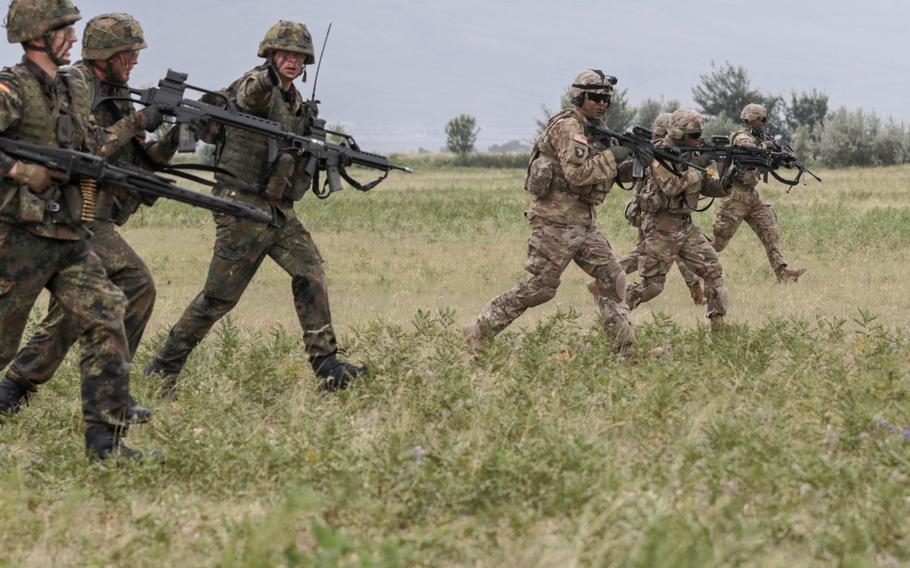 U.S. Army and German soldiers advance during an assault training mission at the Vaziani Training Area, Georgia on Aug. 1, 2018. Noble Partner18 incorporates units from 13 countries, contributing to a stable and secure environment in the Black Sea region. (U.S. Army) 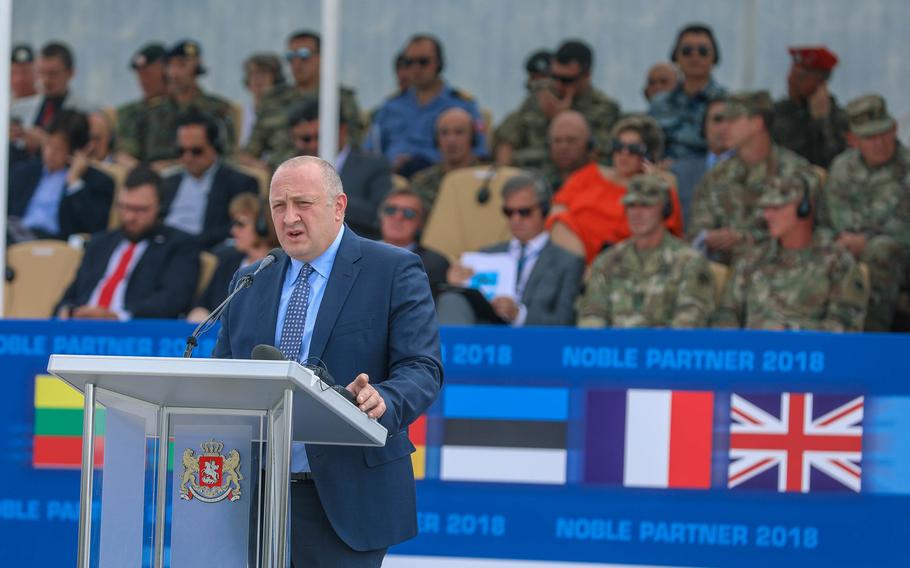 Giorgi Margvelashvili, President of Georgia, speaking at the Noble Partner 18 opening ceremony at the Vaziani Airfield, Georgia, on Aug. 1, 2018. Noble Partner 2018 is an annual Georgian and U.S. Army Europe exercise. It is intended to support and enhance the readiness and interoperability during a multinational training operation. (Ellen C. Brabo/U.S. Army)

KAISERSLAUTERN, Germany – Russia is none too happy about the presence of U.S. troops in Georgia on the 10th anniversary of a brief war between the two former Soviet republics, but U.S. officials say the military exercise there will keep its partners ready for potential aggression.

On Tuesday, Russia Prime Minister Dmitry Medvedev delivered a dramatic warning on state television, saying that any attempt by NATO to incorporate Georgia into the alliance could trigger a new and “horrible” conflict.

Medvedev cited the “unresolved territorial conflict” over two areas Russia has recognized as independent and Georgia considers breakaway provinces as a potential flashpoint.

U.S. officials declared their support for Georgia during Noble Partner’s opening ceremony, without announcing any future plans for NATO admission.

Georgia, which gained independence from the Soviet Union in 1991, has long aspired to join the alliance but its progress toward membership has been blocked by several European governments who say the move would unnecessarily antagonize Russia.

The two countries exchanged blows on Aug. 7, 2008, when Georgian troops launched a surprise attack aimed at regaining control over the Moscow-backed breakaway province of South Ossetia. Russian forces intervened and during a five-day war drove their opponents deep into Georgian territory. A peace deal ended the war and Russian forces withdrew from Georgia two months later. But Moscow recognized the independence of South Ossetia and Abkhazia, another rebel region, creating a major strain in relations with the United States and European Union.

“Russia has nothing to fear from the NATO exercises in Georgia, yet it perceives continued Western activity in its near abroad as a security threat,” Jacqueline Hazelton, an assistant professor of strategy and policy at the U.S. Naval War College, said Wednesday.

She pointed out that NATO is a defensive organization and that exercises to improve Georgia’s military capabilities are seen by the West as supportive of its rightful ability to defend itself.

“What makes the situation sticky is that Russia considers itself to be acting defensively too, and in its own legitimate sphere of influence,” Hazelton said.

This year’s drills will center around defensive operations. In one scenario, forces will occupy semi-prepared positions and defend against an attacking force using live ammunition, the U.S. military said.

“It’s a demonstration of the United States and … the alliance’s commitment to our partner, Georgia,” said Col. Patrick Ellis, commander of the 2nd Cavalry Regiment.

The 2nd Cavalry, based in Vilseck, Germany, has been active in exercises throughout Eastern Europe since relations between NATO and Moscow started deteriorating in the aftermath of the Russian occupation of parts of Ukraine.