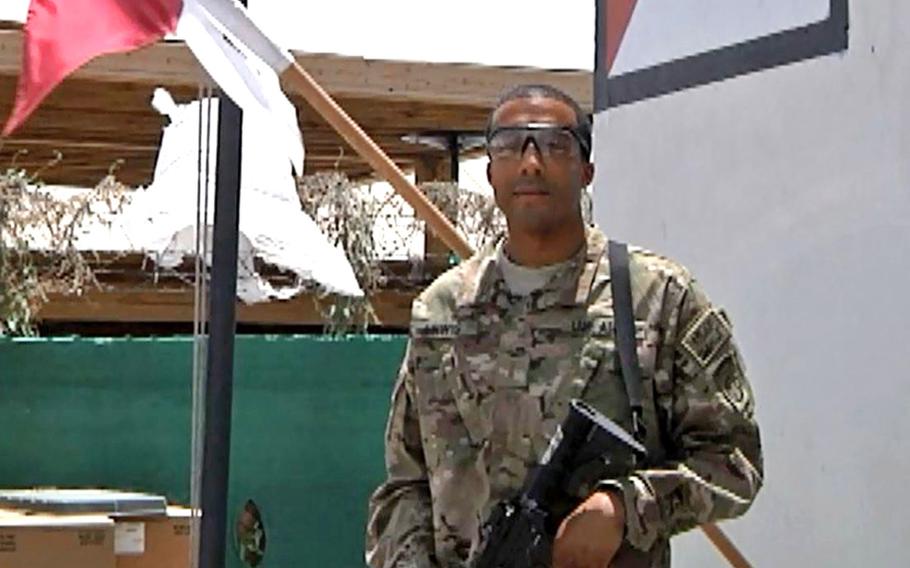 Then-2nd Lt. Antoine Lewis sends a greeting to Chicago, Illinois from Forward Operating Base Fenty, Afghanistan for Independence Day 2012. The 39-year-old Army captain was among the 157 people killed in a plane crash in Ethiopia on Sunday. (Defense Department)

A 39-year-old Army captain was among the 157 people killed in a plane crash outside the capital of Ethiopia on Sunday.

Antoine Lewis, who family say was stationed in Ottawa, Canada, had served in Afghanistan and was one of eight Americans on board the Ethiopian Airlines Flight 302 en route to Kenya, which crashed shortly after takeoff, Chicago’s ABC 7 News reported.

Lewis, who was on vacation to do Christian missionary work, was born and raised in Matteson, Ill., in a family of nine children, the local news station reported.

“He went doing the things that he loved, that he had a passion for,” his mother Antoinette Lewis told the station. “His passion was just to make a better world, make a better place, both here and our mother country.”

Investigators found the jetliner’s two flight recorders at the crash site outside the capital of Addis Ababa, The Associated Press reported.

“I heard this big noise,” resident Tsegaye Reta told the AP. “The villagers said that it was a plane crash, and we rushed to the site. There was a huge smoke that we couldn’t even see the plane. The parts of the plane were falling apart.”

A married father of a 15-year-old son, Lewis planned to start a business or charity and build a home in Africa after retiring from the military, family said. He had made several trips to the country, they said.

He had joined the Army as an enlisted soldier and later earned his undergraduate and graduate degrees, his father Rodney Lewis said. “He was also stationed in South Korea, he was a military man, he loved it, he was moving up through the military.”

The soldier’s wife, Yalena Lopez — also an Afghanistan veteran — told the local station she was still in disbelief, calling her husband a loving man who was trying to become a better version of himself each day.

People from 35 countries died in the incident, including 32 from Kenya. Canada, Ethiopia, the United States, China, Italy, France, Britain, Egypt, Germany, India and Slovakia all lost four or more citizens.

Airlines in Ethiopia, China, Indonesia and elsewhere grounded the Boeing 737 Max 8 jetliner on Monday after the second devastating crash of one of the planes in five months, the AP reported. A Lion Air jet of the same model crashed in Indonesian last year, killing 189 people.

Chicago-based Boeing said it did not intend to issue any new recommendations about the aircraft to its customers, which include Southwest, American and Air Canada airlines.

On Facebook, Lewis’s sister Markita Jones-Lewis said he was always an “awesome big brother” who used to read her bedtime stories and convinced her Freddy Kruger from the “Nightmare on Elm Street” horror movie series would not get her in her sleep. He taught her to “live with no fears,” she said.

“Thank you for serving our country and being a loving husband, son, brother, father, cousin and just a all around great man,” she wrote.