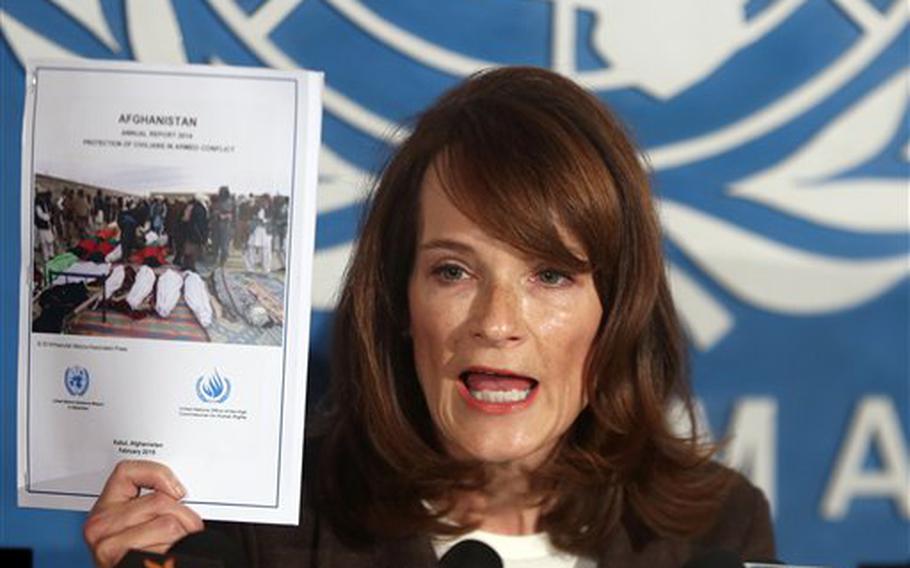 U.N. Human Rights Director Georgette Gagnon shows a copy of a report on civilian casualties in 2014 during a press conference in Kabul, Afghanistan, Wednesday, Feb. 18, 2015. In a separate report, released Wednesday, Feb. 25, 2015, the U.N. Assistance Mission in Afghanistan said more than one in three Afghans detained on conflict-related allegations say they were tortured or mistreated. (Massoud Hossaini/AP)

KABUL, Afghanistan — The Afghan government has made strides in reducing the number of detainees tortured or abused by security forces, but more than a third of those taken prisoner during the conflict still say they’ve faced ill treatment, according to the United Nations.

“The Government of Afghanistan’s efforts to prevent torture and ill-treatment have shown some progress over the last two years,” Nicholas Haysom, chief of the U.N. Assistance Mission in Afghanistan, said in a statement. “More remains to be done, however, and I welcome the new administration’s immediate attention to end these practices.”

The report — the third issued by the U.N. since 2011 — found a 14 percent decline over the past two years in the number of detainees reporting torture or ill treatment at the hands of government or foreign forces. But U.N. investigators say they found credible and reliable evidence that 278 of the 790 “conflict-related” detainees — or 35 percent — they interviewed were subjected to abuse and torture by members of Afghanistan’s police, intelligence or military forces.

Among those incarcerated were 105 children, 44 of whom experienced ill-treatment, according to the report.

In a Pashto-language statement released by the presidential palace, the Afghan government noted the decrease and said it takes the findings by the U.N. mission seriously.

“The Afghan government is committed to addressing the claims that are made in the report,” the statement said. “The torture of the detainees is against the constitution, other laws of the country, and the policies of the Afghan government.”

In documenting what the U.N. called the “regular and prevalent” use of torture by Afghan security forces in many provinces, the report described widespread practices that included beatings with pipes, cables and sticks; suspension; electric shocks; forced prolonged standing; stress positions, including standing outside in cold weather for long periods; and threats of sexual assault.

“During my first night there the [Afghan National Police] village commander and 15 other [policemen] beat me with cables,” one detainee, arrested in Kandahar in May 2014 because of his brother’s suspect ties to insurgents, told the U.N. “They pulled and squeezed my testicles until my urine had blood. They kicked me in the stomach. Then they gave me pen and paper and ordered me to testify against my brother. About 10 days later I was given electric shocks on my feet three times, using power from a wall socket.”

The report’s descriptions were confirmed by a resident of Kandahar province who asked to be identified as Abdul Mosawer for his personal safety.

Mosawer was recently released after spending four years in prison; Afghan forces had accused him of having ties to the Taliban — a charge he denies. Suspected insurgents or others accused of political crimes bear the brunt of the abuse, he told Stars and Stripes, because security forces want to elicit information.

For the first three weeks of his detention, Mosawer said he endured beatings, starvation, sleep deprivation and extreme temperatures.

“After they found nothing, they stopped,” he said.

In the years since 2001 when the United States and its allies toppled the Taliban in reaction to the attacks of Sept. 11, 2001, Afghanistan has been the site of some of the most controversial American detention facilities. A report released last year by the U.S. Senate Intelligence Committee detailed myriad abuses at four CIA-run centers in the country. The revelations led Afghan President Ashraf Ghani to call the American practices “shocking” and “inhumane.”

The United States closed its last detention centers in Afghanistan in December, three weeks before the NATO-led International Security Assistance Force declared an end to its combat mission in the country.

Prior to that, the U.N. documented several reports of abuse tied to international forces. Seven detainees said they were mistreated, and the U.N. reported two credible accounts of torture, one in a U.S. facility in Maydan Wardak in September 2013 and the other in a U.S. Special Forces facility at Baghlan in April 2013, during which detainees said they were repeatedly beaten.

Coalition officials told the U.N. that the reports were investigated but could not be substantiated.

Nearly half of the detainees captured during joint coalition-Afghan operations reported being abused once in Afghan custody. The U.N. credited the coalition with reducing the number of detainees transferred to Afghan bases where abuse occurred.

The withdrawal of the majority of foreign forces and their current, primary mandate to train and advise Afghan forces under the new Resolute Support mission will limit the international community’s ability to oversee Afghan detention policies, mission commander Gen. John Campbell wrote in a letter to the U.N.

“The RS mission operates under a fundamentally different legal paradigm to ISAF and this has a significant impact on the ability of international military forces to directly monitor or influence the detention practices of [the Afghan government]” he wrote. “International military forces are no longer directly engaged in detaining people in Afghanistan or transferring persons into [government] custody.” Nor, Campbell added, can coalition forces inspect Afghan facilities.