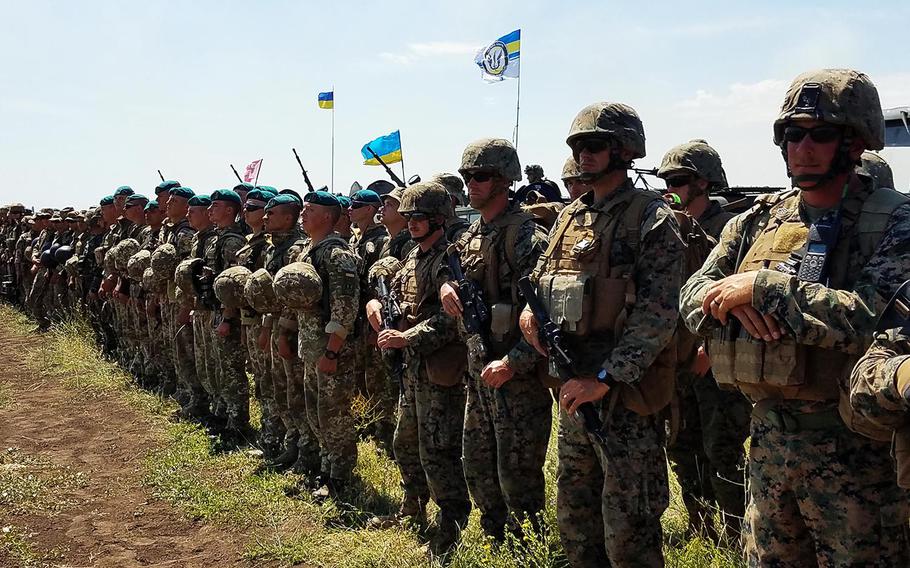 U.S. and Ukrainian Marines stand together after a company-level attack during the land portion of Exercise Sea Breeze, Saturday, July 14, 2018. (Martin Egnash/Stars and Stripes)

U.S. and Ukrainian Marines stand together after a company-level attack during the land portion of Exercise Sea Breeze, Saturday, July 14, 2018. (Martin Egnash/Stars and Stripes) 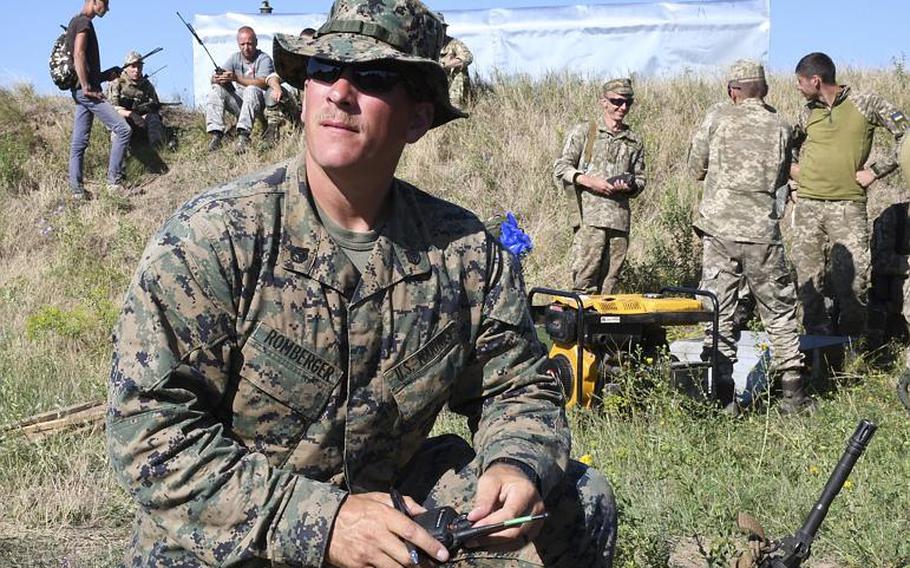 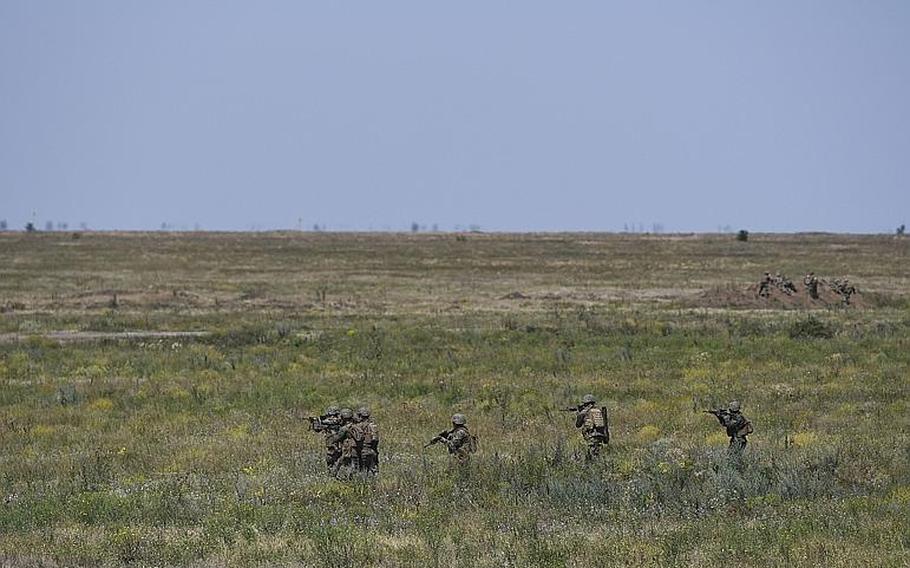 Marines move out on an assault course at a military base in the Mykolaiv Region of southern Ukraine on Saturday, July 14, 2018, during Exercise Sea Breeze, which brings together representatives from 19 NATO partner and allied troops to build interoperability across the alliance in the Black Sea. (Chad Garland/Stars and Stripes) 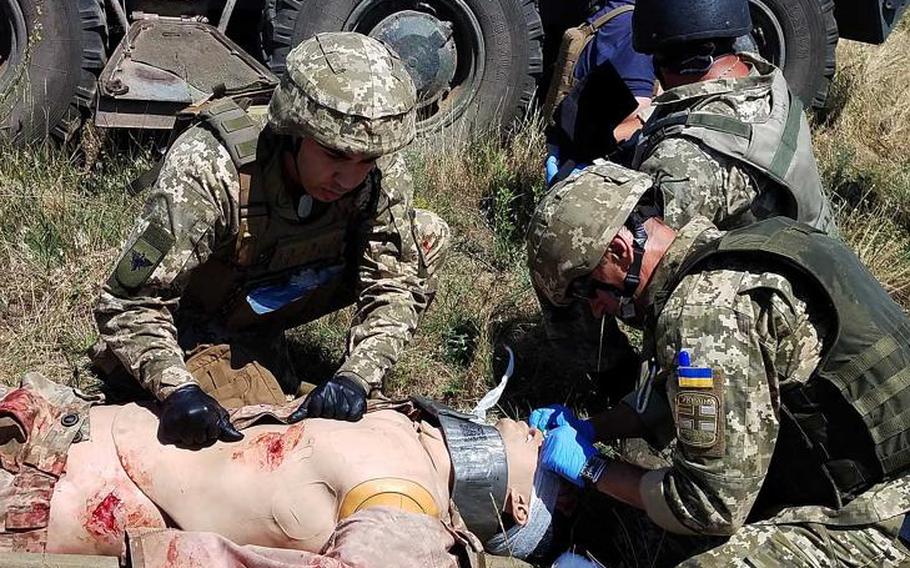 Ukrainian marines and officer candidates tend to a mock casualty during a live-fire exercise at the land portion of Exercise Sea Breeze, Saturday, July 14, 2018. (Martin Egnash/Stars and Stripes) 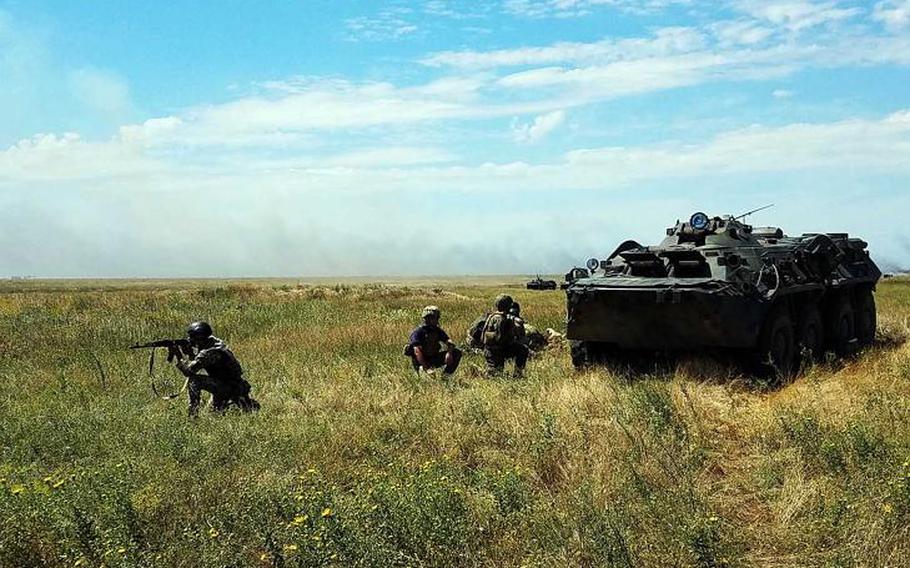 U.S. and Ukrainian Marines provide security near a Ukrainian BTR-80 armored transporter during a company-level attack at the land portion of Exercise Sea Breeze, Saturday, July 14, 2018. (Martin Egnash/Stars and Stripes) 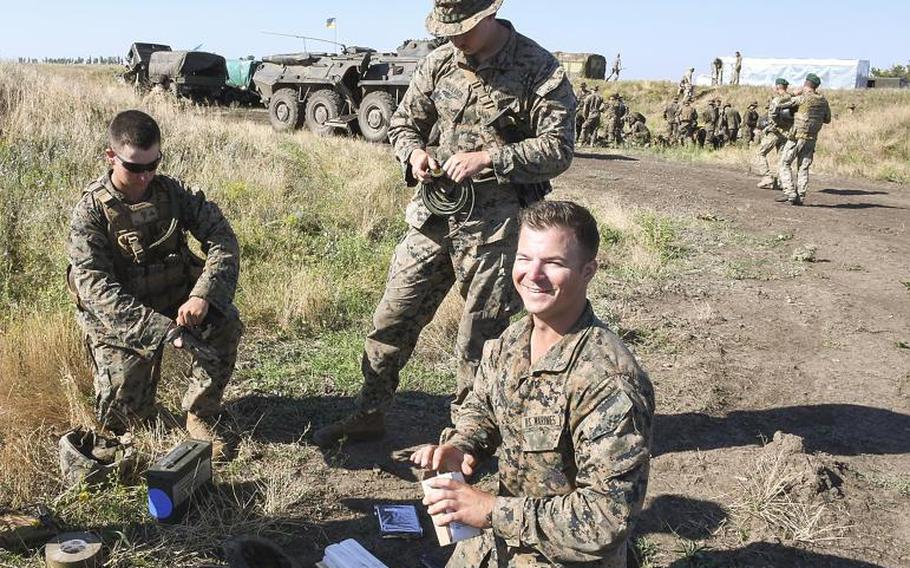 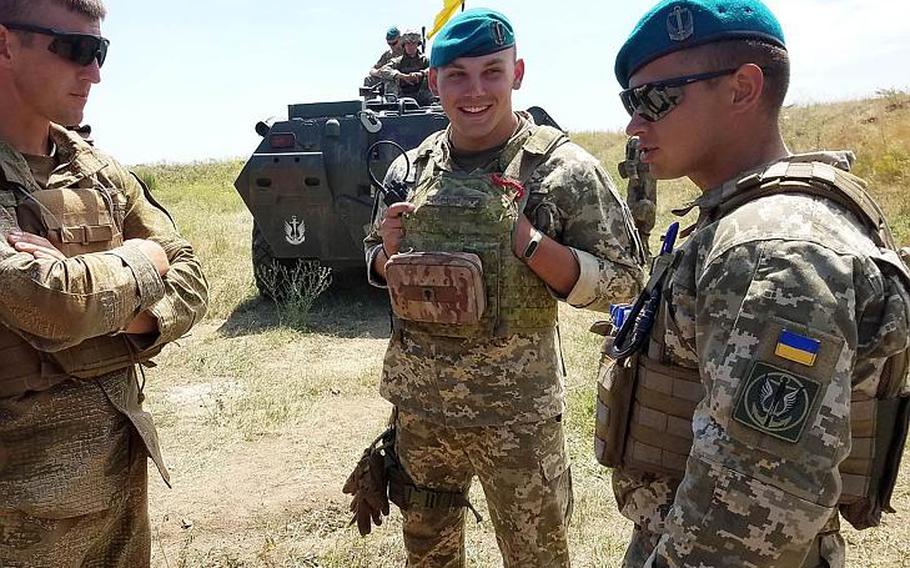 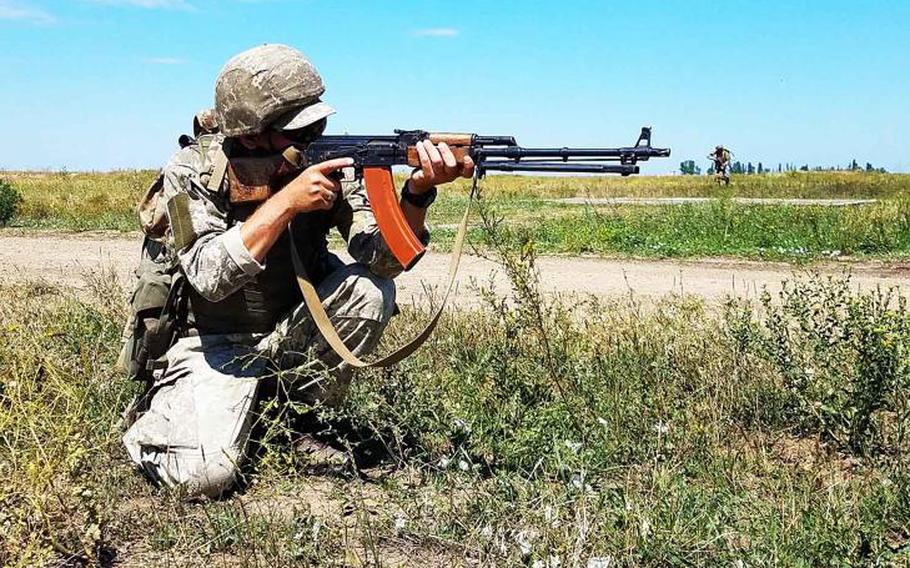 A Ukrainian marine takes aim during a live-fire exercise with U.S. Marines during the land portion of Exercise Sea Breeze, Saturday, July 14, 2018. (Martin Egnash/Stars and Stripes) 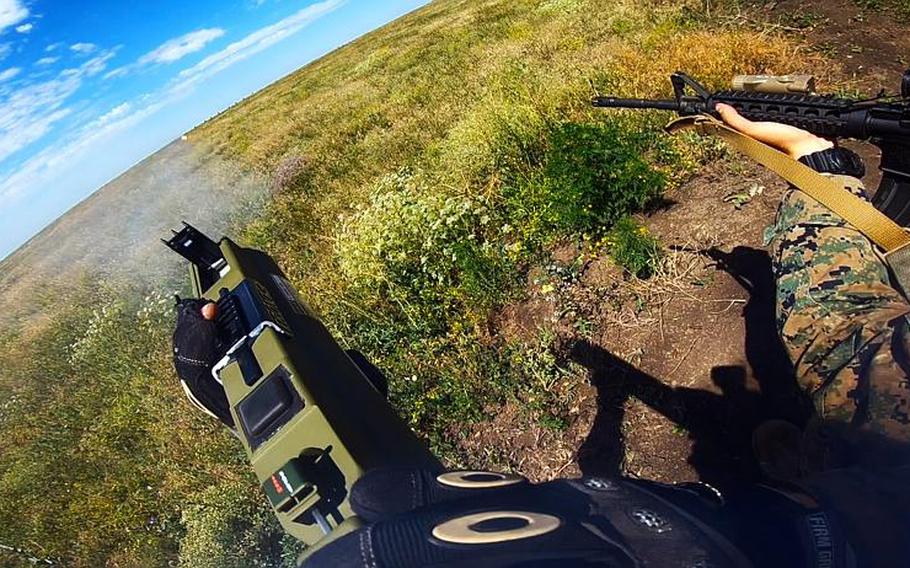 MYKOLAIV REGION, Ukraine — The U.S. Marines were firing at a fictional enemy, but the Ukrainian marines firing by their side during the past few days had one very real adversary on their mind: Russia.

Exercise Sea Breeze, which launched July 9 and brings together 19 nations, is a lot like many other annual drills at the operational level, and it brought with it the standard messages from U.S. officials about European partnership and cooperation.

But in this case, Ukrainians are going to use what they learn to fight separatists backed by Russia, which took the Crimean Peninsula from them in 2014 and whose leader, Vladimir Putin, is scheduled to meet with President Donald Trump on Monday in Helsinki.

Trump and Putin will discuss Ukraine, conflict in Syria and Russian election meddling in the U.S., Trump said last week.

Trump did not rule out recognizing as legitimate Russia’s seizure of Crimea, which he said happened on President Barack Obama’s watch.

The Russian takeover of the peninsula, where both the Russian and Ukrainian navies had headquarters, divided the Ukrainian 1st Marine Battalion, as many marines stayed in Crimea and sided with Russia.

Since then, the marines loyal to Ukraine — like U.S. Marines, their motto is “Always Faithful” — have deployed frequently to the country’s eastern region to fight the Russia-backed separatists.

“We will definitely use what we’ve learned here the next time we go to the east,” said Capt. Alexander Tonenchuk, the Ukrainian battalion’s executive officer, referring to the ongoing training with U.S. Marines.

More than 30 ships and other vessels, two dozen aircraft and nearly 3,000 troops are participating in the two-week Sea Breeze exercise, which Russia called “an attempt at provocation.”

Ukrainian troops on Tuesday are expected to mount an amphibious assault on Snake Island in the Black Sea, about 110 miles from the Crimean Peninsula.

Thunderous airstrikes by a pair Su-25 Frogfoot ground attack jets kicked off the attack, which saw U.S. Marines employ a 5-pound explosive charge to clear an obstacle to their advance and a pair of booming M72 LAW rockets to disable simulated enemy vehicles.

Ukraine’s military is undergoing reforms to bring it up to NATO standards by 2020, as the country hopes to join the defensive alliance.

Echo Company executive officer Capt. Brad Adams said he was impressed with how far the Ukrainian marines have come since the country gained independence from the Soviet Union.

The Ukrainian military is only as old as most of the U.S. Marines in the weapons platoon, he said.

“These guys are very good,” Adams said of the Ukrainians. “They want to learn and keep getting better.”

They performed well at a night ambush earlier in the week, he said, and during Saturday’s assault they began using their armored vehicles more effectively to achieve “overlapping fires.”

Weapons platoon commander Capt. Jeff Reilly had taught the Ukrainians earlier in the week to bound with their armored vehicles, where vehicles alternate providing suppressive fire and advancing toward the objective.

It was a bit like asking them to go from crawling to running, Reilly said, but they quickly showed improvement.

Nevertheless, the skills developed through Sea Breeze are not specifically about taking on Russia, said Navy Capt. Matt Lehman, one of the top commanders in charge of the exercise, who observed Saturday’s land-side activities after spending a few days underway for naval events.

In opening ceremonies last week, Ukrainian Vice Adm. Ihor Voronchenko said the exercise activities would show unity and readiness to protect shared values such as freedom, rule of law and the inviolability of sovereign states’ borders.

The naval forces commander Voronchenko said this event is “our common response to ideologues, organizers and sponsors of ‘hybrid wars.’”

Hybrid war is loosely defined but includes political, informational and cyberwar tactics alongside conventional and unconventional means. The term is often used to describe Russian operations.

Straightforward fightingFor some of the Marines, training with European forces offered a contrast from their time deployed to Central Command.

Staff Sgt. Anthony Romberger, who deployed to Iraq in 2008 and 2009, said it was like a “flashback” to an earlier era and a more straightforward kind of fighting.

“It’s different than Iraq and Afghanistan,” he said. “Here, you know where your enemy is.”

Sgt. Chad Sparks, a machine gunner in the platoon, spent a 2012 deployment in Helmand province in Afghanistan’s south.

“These guys are a lot better than the ANA,” Sparks said, referring to the Afghan National Army, which has struggled to take over the fight against the Taliban insurgency in their own country.

While imparting new skills, the Marines also had the opportunity to learn from their Ukrainian counterparts, such as cross-training on their machine guns or other weapons systems.

“I never got to see an RPG up close before,” said Cpl. Patrick Concannon, section leader for the U.S. platoon’s assaultmen, speaking of the chance to check out Ukrainian rocket-propelled grenade launchers.

His section is responsible for setting up demolitions to breach obstacles as well as firing rockets. He said he taught his Ukrainian counterparts how best to employ their rockets to effectively engage enemy targets.

“They have a conflict ongoing,” Concannon said. “Being able to assist them … hopefully that can help them be successful on the battlefield.”