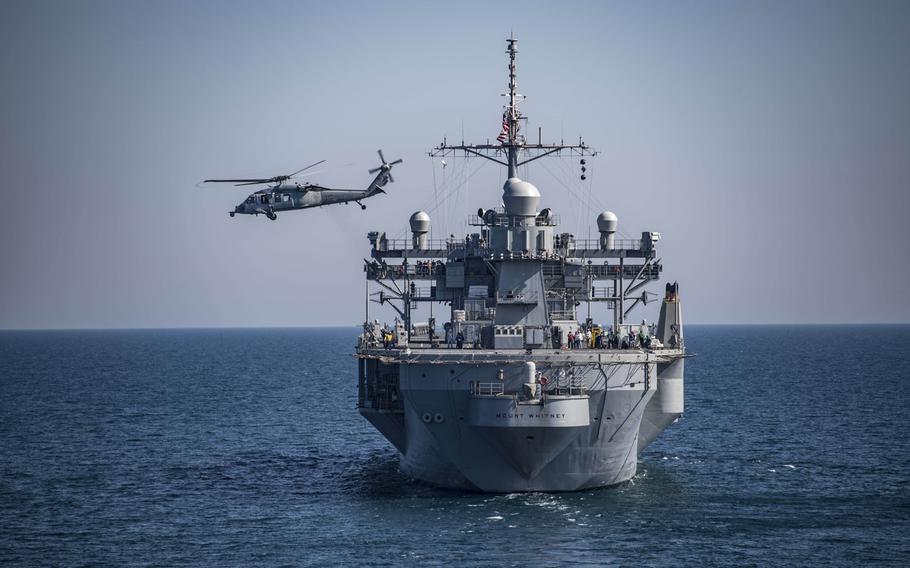 An MH-60 Sea Hawk helicopter, assigned to the Ghostriders of Helicopter Sea Combat Squadron 28, takes off from the USS Mount Whitney during exercise Sea Breeze 2018 in the Black Sea, July 13, 2018. Ukraine's government announced Sunday that will establish a naval base along the Sea of Azov before the end of the year. (Ford Williams/U.S. Navy)

Ukraine announced plans to establish a naval base along the Sea of Azov, a move that came a day after the U.S. said it is mulling more military assistance for Kiev to counter Russia’s actions.

“This (base) will create conditions for rebuffing the aggressive actions of the Russian Federation in this region,” the Ukrainian government said in a statement on Sunday.

U.S. military officials have been watching as tensions have increased in the Sea of Azov and the strategic Kerch Strait, which connects Ukrainian port cities to the Black Sea and from there to the Mediterranean.

Since April, Russia has delayed the transit of hundreds of commercial ships attempting to sail through the Kerch Strait. Some security analysts have described Russia’s actions as a de facto blockade.

“And wherever those gaps are, we are prepared to sit down and talk with Ukraine about what their needs are. They can buy things through our foreign military sales,” Volker told reporters.

Volker also told Radio Free Europe that Ukraine’s short supply of naval and air defense assets was worrying because it means the Russians “feel they can assert dominance there (in the Sea of Azov).”

“I think that’s going to be the focus as we develop the next steps in our defense cooperation,” he said.

“Russia’s actions to impede maritime transit are further examples of its ongoing campaign to undermine and destabilize Ukraine, as well as its disregard for international norms,” State Department spokeswoman Heather Nauert said in August.

Moscow has been building up its Black Sea fleet and ground forces since its 2014 seizure of Ukraine’s Crimea Peninsula, where Russia has deployed sophisticated air defense systems.

In May, Russia opened a new bridge that connects Crimea to the Russian mainland. The building of the bridge without Ukraine’s approval, which spans the Kerch Strait, has been condemned by the West and Ukraine as illegal.

“Russia’s activity in the Sea of Azov and in the Strait of Kerch seems to confirm Moscow’s ambitions to make this basin a fully Russian-controlled internal area,” Krzysztof Nieczypor, a Ukraine analyst with the Centre for Eastern Studies, wrote in August. “Access to the Sea of Azov and control of the ships sailing through the Strait of Kerch enables Russia to exert economic black-mail on Ukraine.”