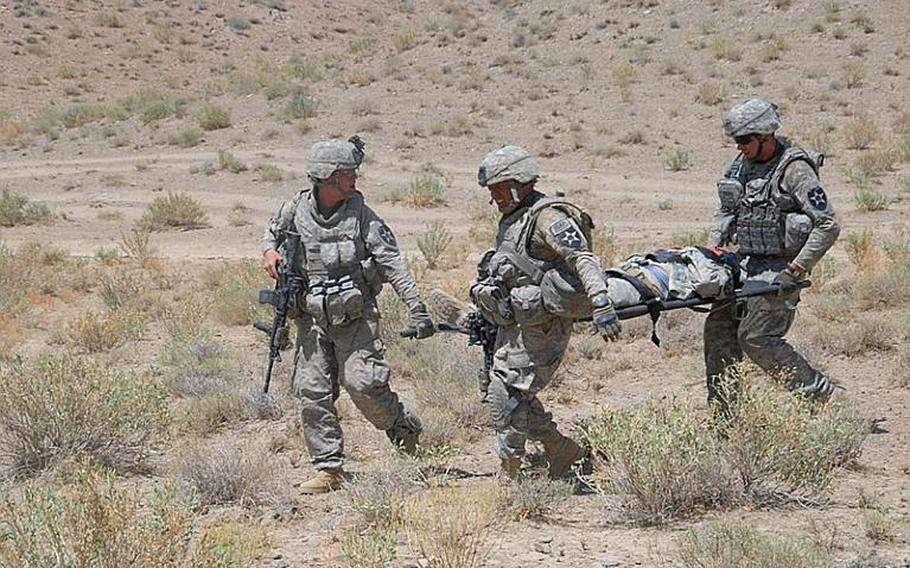 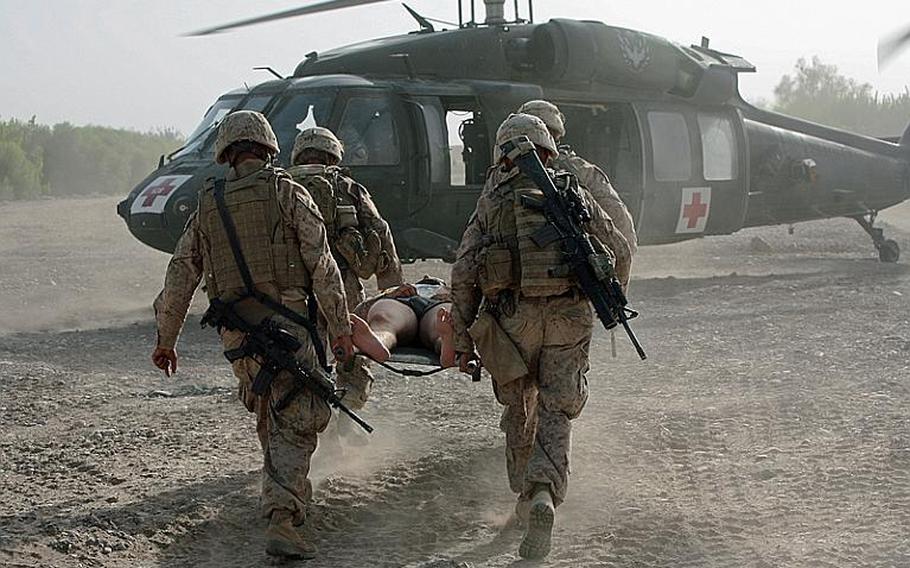 A few hundred U.S. troops injured in Afghanistan will soon become part of a study testing the ability of a potentially lifesaving drug that aids blood clotting.

On the surface, the question of whether to give injured troops tranexamic acid seems simple: It&rsquo;s cheap, widely available and stems bleeding by sustaining the blood&rsquo;s natural clotting response.

The British military started injecting troops with the drug soon after a much larger study, published in 2010, showed that it reduced deaths by 10 percent when given within eight hours of injury, and even more when administered sooner. So why isn&rsquo;t the U.S. military using TXA?

Military officials say they prefer to wait for the results of a joint study by the U.S. and U.K., which will examine about 1,000 patients &mdash; one-third who will likely be U.S. troops &mdash; treated with TXA at Camp Bastion, the main British base in Afghanistan.

The results of the study should be ready by this summer, said Air Force Dr. (Col.) Todd Rasmussen, a vascular surgeon and deputy commander of the United States Army Institute of Surgical Research.

&ldquo;We are actively studying it, looking into its use,&rdquo; he said. &ldquo;But as of today, we don&rsquo;t think the evidence has tipped the balance.&rdquo;

The British study, called CRASH-2, looked at more than 20,000 patients, most of them traffic accident victims, treated in 274 hospitals in 40 countries. The study&rsquo;s lead investigator, Ian Roberts of the London School of Hygiene & Tropical Medicine, said the CRASH-2 data, from a randomized controlled trial, provided more robust evidence for TXA&rsquo;s effectiveness than the military&rsquo;s smaller observational study would.

He said a further analysis of the CRASH-2 data showed that treatment within one hour of injury reduced the risk of bleeding to death by 30 percent compared with a placebo, and using it within one to three hours cut the risk by 20 percent. After three hours, however, TXA is ineffective and possibly harmful.

Roberts pointed to the drug&rsquo;s long safety record &mdash; tranexamic acid was found to be useful in controlling bleeding in the early 1960s &mdash; and the fact that it has been used to reduce bleeding in surgery patients and to treat heavy menstrual bleeding. The use of the drug in cardiac surgery patients suffering immense blood loss is what led him to suspect that it could be used to stop the bleeding in trauma patients.

&ldquo;I cannot understand what is going on, why there is such skepticism,&rdquo; Roberts said of the U.S. military&rsquo;s reluctance. &ldquo;There&rsquo;s very strong evidence. I feel it&rsquo;s a tragedy. Not using it is costing lives.&rdquo;

Half of all servicemembers killed in Iraq and Afghanistan suffered wounds that were potentially survivable. Uncontrolled bleeding from the chest, neck, groin and abdomen &mdash; areas where a tourniquet cannot be cinched &mdash; accounted for the majority of these deaths, making hemorrhaging the top cause of preventable death downrange.

While blood products and whole-blood transfusions are helpful, military doctors and researchers are urgently seeking ways to aid clotting. TXA does this by preventing enzymes in the body from breaking down the blood&rsquo;s natural clotting response.

But military doctors and U.S. trauma surgeons say that part of the problem with using TXA downrange is that there is no evidence the drug will be effective in treating the injuries of servicemembers in combat.

Often, they have limbs mangled and severed by explosive devices; shrapnel and bullet wounds to the face, neck and torso; and unseen internal bleeding &mdash; injuries that are very different from the traffic accident victims in the CRASH-2 study, though some of the patients were victims of stabbings, gunshots and land mine explosions.

The majority of the hospitals in the CRASH-2 study were also in poorer countries that lacked the military&rsquo;s evacuation capabilities or access to blood products.

&ldquo;Had the CRASH-2 trial been done in a combat setting, provided indications of how severely injured the patients in the study were, or even been performed in developed countries with established trauma systems, it would have been more applicable to us,&rdquo; Rasmussen said.

Dr. Jerrold Levy of Emory University in Atlanta, who has written about the CRASH-2 study, said that while the results are promising, they do not prove that the drug drastically reduced mortality. In the study, 14.5 percent of patients given TXA died within four weeks of treatment, compared with 16 percent for patients given a placebo.

&ldquo;The numbers are not dramatic,&rdquo; he said, &ldquo;But because of the size of the study, it is statistically significant.&rdquo;

The drug is not a panacea, Levy said, but the study does show that TXA has potential to reduce critical bleeding when combined with other therapies.

&ldquo;It&rsquo;s an interesting and important part of a multimodal therapeutic plan that needs to be considered,&rdquo; he said.

The U.S. military might be hesitating, in part, out of caution: It has been criticized for rushing therapies into use that proved ineffective, such as the powerful coagulant Factor VII. It was used off-label to help stop bleeding, but was later shown not to reduce deaths and might have left servicemembers at greater risk for fatal embolisms, or blood clots.

&ldquo;Factor VII was going to be a miracle drug, and it&rsquo;s not,&rdquo; said Dr. Corey Slovis, chairman of the department of emergency medicine at Vanderbilt University in Nashville, Tenn.

TXA presents a similar challenge in some ways. The CRASH-2 subjects were followed for four weeks without a significant number developing embolisms. Roberts says four weeks is enough time to rule out an increased risk; others disagree.

&ldquo;What is the scope of this medication?&rdquo; Slovis said. &ldquo;We need to find out.&rdquo;

That is what the military is trying to do as fast as possible while ensuring safety, Rasmussen said. &ldquo;Nobody is closer to the TXA debate than me. I&rsquo;m in the middle of it every day.&rdquo;