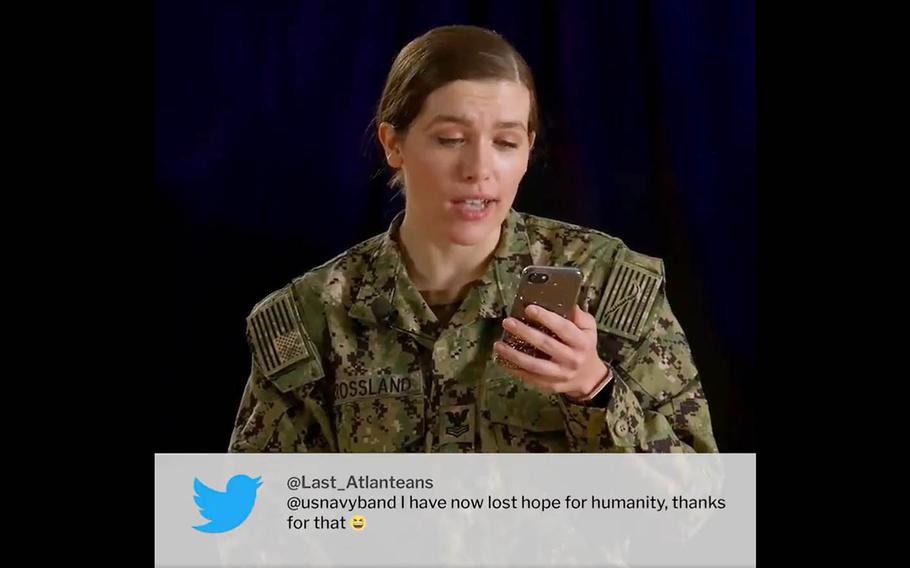 A Navy Band member reads a critical tweet about the band's sea-shanty version of a Taylor Swift song in this screenshot of a video posted to Twitter, Monday, Feb. 1, 2021. (U.S. Navy)

On Monday, they embraced the wave of Twitter critics who blasted the adaptation as a crime against music and good sense.

Haters gonna hate, the Navy Band seems to be saying in a video retort posted online Monday, but we’re just gonna laugh at the shade.

“Last week we had some fun with sea shanties and Twitter had some fun with us,” the Navy Band tweeted with the video, which parodies a running segment on “Jimmy Kimmel Live!” called Mean Tweets. “Here’s a few tweets that made us laugh.”

In the video, the musicians who performed the shanty version of Swift’s “We Are Never Ever Getting Back Together” take turns reading some of the flaming tweets and offering their reactions.

“God, you guys are embarrassing,” commenter @benrodriguez had tweeted after the song’s release.

“Yes, my family tells me that, too,” a Navy Band member says in response.

One commenter offered the band $20 to “shut the [expletive] up,” to which a band member shakes his head and exclaims, “Twenty bucks?!”

One Twitter critic asked whether there was any chance the U.S. Space Force could fire the song into the sun.

A Navy Band member chuckles after reading the suggestion and says, “Ehh, I feel the same way.”

After a band member reads the message “@usnavyband I have now lost hope for humanity, thanks for that,” she grimaces and says, “I’m sorry?”

The video ends with grudging respect for the tweeting creativity of @DarkLaughterTBD, who posted, “There will be plenty of time for work songs in Leavenworth when you’re all brought to justice for making this.”

“I gotta give it to you,” says a band member. “That was pretty good.”