A view from the ramparts of the four-story Porta Nigra, looking down on adjacent buildings. (Slobodan Lekic/Stars and Stripes) Trier's central marketplace, or Hauptmarkt, with its colorful assembly of ornate buildings. (Slobodan Lekic/Stars and Stripes) 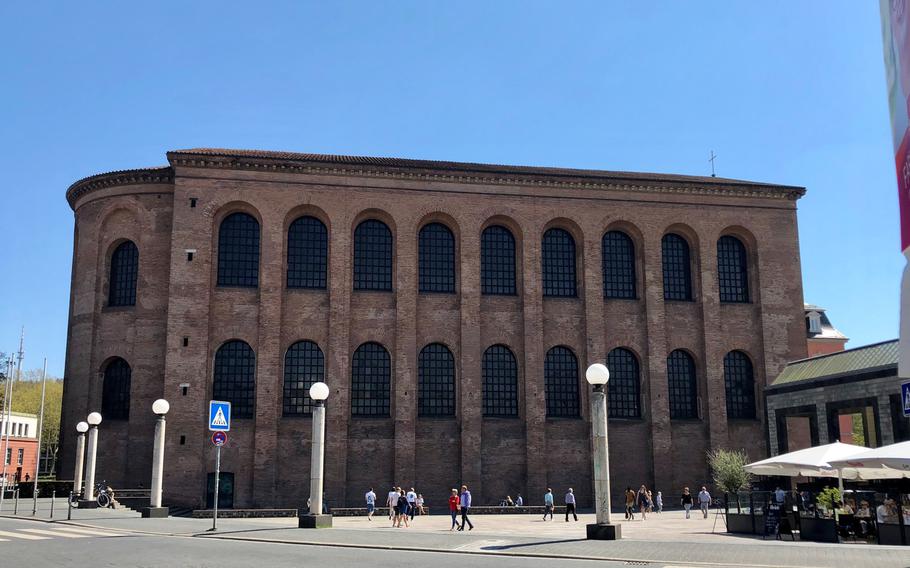 The so-called Basilica, now an Evangelical church, was built as an audience hall for Roman emperor Constantine as the aula Palatina. It is said to be the largest Roman building still in everyday use. (Slobodan Lekic/Stars and Stripes) 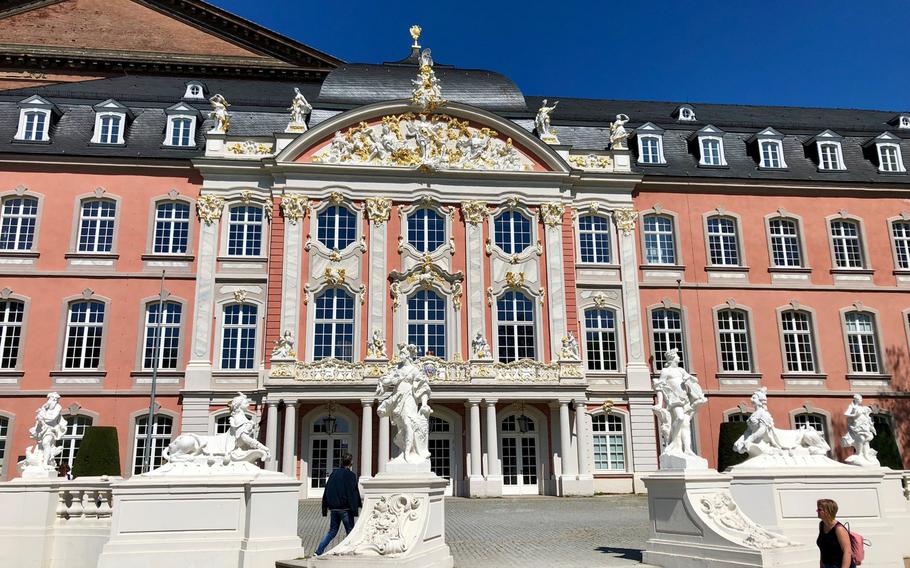 The ornate palace adjacent to the Basilica housed was the residence of the archbishops of Trier from the 16th century until the late 18th century. (Slobodan Lekic/Stars and Stripes) The statue of German philosopher and social revolutionary Karl Marx, who was born and spent his youth in Trier, is located just off Porta Nigra square. The statue was a gift from China and was erected last year to mark the 200th anniversary of his birth. (Slobodan Lekic/Stars and Stripes)

Trier was founded by the Celts in the 4th century B.C. Almost exactly 2,000 years ago, when the Roman empire expanded from Gaul into western Germany, the town then known as Treveris became a bulwark on the border between civilization and the hostile barbarian tribes in northern Europe.

As a result, history buffs will find plenty of Roman ruins — and also medieval treasures — strewn across the modern-day city, a UNESCO World Heritage site.

The best place to begin a tour is at the massive, world-famous Porta Nigra (“Black Gate”), which was the main entrance through the walls that once surrounded the Roman town. Built in 180 A.D., the name derives from its sandstone, darkened by nearly two millennia of residue. Next to it is a large museum which traces its history, with explanations in both German and English. The entire four-floor structure, whose interiors were heavily modified during medieval times, can be accessed by visitors.

A 15-minute stroll down the town’s central pedestrian street, Simeonstrasse, will bring you to the oldest church in Germany. The Basilica, once known as the Aula Palatina, is now an evangelical church. Originally built as an audience hall for Emperor Constantine in the 4th century, it is 220 feet in length and 108 feet high — the biggest Roman building in the world still in regular use today. It was firebombed by the Allies in World War II, but somehow managed to survive and was restored to its original Roman appearance in the 1950s.

Another 10-minute stroll through the grounds of the over-the-top ornamentally decorated Rococo palace adjacent the Basilica will bring you to Trier’s sprawling Imperial Baths complex. The jaw-dropping maze of the baths, which were never actually completed, can be explored both on the surface and through a network of underground passageways through which hot water was once pumped into the various pools.

Trier also boasts plenty of non-Roman sights that can be visited on a daytrip. The Hauptmarkt, the marketplace halfway between the Porta Nigra and the Basilica, was the center of medieval Trier. It is framed by colorful Renaissance buildings and includes a central pillar and cross where public punishments were once carried out.

Another major tourist draw is the restored home of Karl Marx, the controversial German philosopher and social revolutionary whose works were used — long after his death — as the basis for the communist ideology. The house was gutted by the Nazis in 1945 and the interior is completely new. Last year, the Chinese government donated a 15-foot bronze statue to mark the 200th anniversary of the birth of Trier’s most famous son. The statue, located just past the Porta Nigra museum, has rapidly become a focal point for throngs of tourists from all over the world.

DIRECTIONS: Trier is 60 miles northwest of Ramstein Air Base along the A62 and A1 autobahn. Or 90 miles from Wiesbaden on the B50.

COSTS: An “Antiquity Card” costing 12 euros per adult provides access to the main Roman sites (the Basilica is free). Up to four children under 18 are included in that price. Parking: The Porta Nigra near the famous gate costs 1.80 euros an hour, or 15 euros for a day.