Tricare seeking right mix of therapies for kids with autism 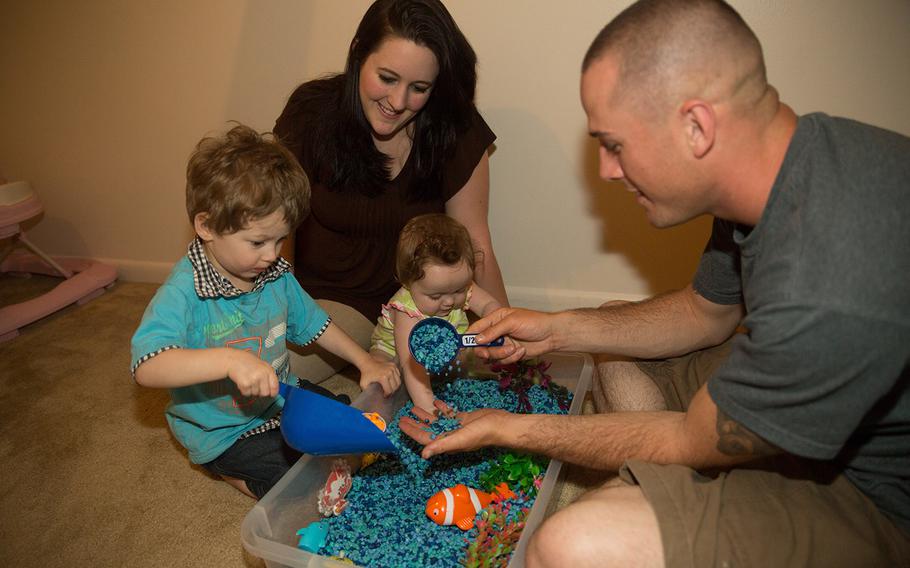 “As of right now,” Simmer said, “Applied Behavioral Analysis does not meet Tricare requirements for evidence-based coverage as part of the basic benefit. It still does not meet what we call the ‘hierarchy-of-evidence’ standard.”

There are, however, several promising developments for parents who believe ABA helps their children and worry that Tricare coverage will someday end.

First, ABA coverage will continue through 2023 under a program extension approved earlier this year. Over that span Tricare estimates that spending on ABA will rise to $430 million, the result of both medical inflation and a steady rise in number of children enrolled in the demonstration. Simmer estimates that only about half of all military children with autism currently receive ABA therapy.

A second notable development is that, at the direction of Congress, Tricare is funding a $7 million research study, to run the length of the five-year extension. The purpose will be to learn how many ABA sessions are most effective.

“What number of hours a week should a child receive to get the best benefit” is one question the study should answer, Simmer said. Another is what impact those hours of ABA therapy have on the families of children with autism.

The study will be run by the University of Rochester in New York and involve 130 military children. With the consent of parents, half of the children will receive standard ABA therapy of 20 or more hours a week and half “adaptive ABA” of only five hours a week. Researchers will learn “what factors predict which mode of treatment is more effective,” Simmer says. “Maybe some children do better with one, and some with the other. Can we identify those children in advance [and] design a treatment program up front that best meets that child’s needs?”

Finally, Simmer said, Tricare is broadening its autism program to encompass combinations of therapies, not solely ABA. The idea is to focus on “the whole child” while at the same time ensuring adequate support of parents whose involvement is seen as perhaps the most critical factor in effective therapy.

Simmer referred to a question asked of 28,000 parents of autistic children in 2012 by the online support group MyAutism: “Which therapy worked best on your child.” Only 15 percent of parents said ABA, which meant it came in third, behind occupational therapy (39 percent) and speech and language therapy (27 percent).

“Right now, the Autism Care Demonstration is solely focused on providing ABA. We went to expand that,” said Simmer. “Occupational therapy and speech therapy are already covered benefits but we don’t always tie them in well with the ABA. We want to really focus on a more comprehensive treatment plan for these children, providing all the services they need and making sure all providers are working together as a team. That’s going to be a big emphasis for us.”

Parents and other advocates for ABA therapy are disappointed Tricare hasn’t verified its effectiveness yet and made the benefit permanent. Simmer cited two reasons. One is that outcome measures initially deployed were criticized by some providers as inappropriate, forcing Tricare to look for more acceptable tools.

Also, Simmer said, some providers are reluctant to use standardize scales to measure outcomes, either because of the cost involved or their concern that requiring children to do measuring tasks will crimp their time with actual therapy.

“I think we have addressed those concerns with the current set of measures we have,” Simmer said. “But it did take time to reach a consensus with all of our stakeholders on what the measures should be and how best to move forward.”

Every six months Tricare now collects therapy outcomes using the Pervasive Developmental Disabilities Behavior Inventory, or PDDBI, which assesses progress on each domain of autism. Two other outcome measures will be used only every two years, given the time it takes with autism to make significant changes.

The Social Responsiveness Scale, or SRS, will progress on social interactions because children with autism often have problems building relationships, interacting with people or understanding how their actions impact people’s feelings.

The demonstration also expects to use the Vineland Adaptive Behavior Scale to measure personal and social skills from early age to adulthood. Each tool was selected, Simmer said, because “they are reasonably available and will measure different areas of progress to give us an overall picture of how a child is doing.”

Some parents have had reasons to criticize the ABA demonstration the past few years. In 2016 Tricare lowered reimbursement fees for categories of providers and in select areas of the country. Congress ordered fee levels restored but not before some providers dropped or stopped accepting Tricare children.

More significant problems surfaced in January this year when new Tricare support contracts took hold and the subcontractor Humana Military hired to process claims for the East Region lacked experience with ABA providers and payment rates, and also had difficulty screening ABA providers for inclusion in the networks.

“The largest issue was with claims payment,” said Simmer. The processor “didn’t properly program in ABA providers” and “what payments should be.” ABA rates are different from most other Tricare services. As a result, Tricare “was paying incorrect amounts, payments were delayed significantly and, at times, claims were denied inappropriately. That was obviously a very serious problem.”

Ten months since these problems first surfaced Simmer could report “progress,” particularly on claim payments. But he said challenges remain for adding ABA providers to the East Region network “in a timely fashion so they could be paid. We still do hear from providers that they are not getting added, or that some of their staff are not getting added, as quickly as they should be.”

Humana and Tricare have a plan “that should resolve the remaining issues in the fairly near future,” Simmer said. “I’m very optimistic about that. But that plan has not yet been fully implemented [and] involves hiring people and training them. But we’re definitely on the path to full resolution.”

Health Net Federal Services, the support contractor for Tricare West Region, opted to use the same claims processor that previously handled ABA claims. But even that region has had challenges building out networks with ABA providers. A shortage of ABA therapists afflicts many civilian communities too.

When the demonstration ends in five years, Simmer said, it is “very unlikely” Tricare will drop ABA coverage. Far more likely is that the therapy becomes “one component of a comprehensive treatment plan. I think it is important. I think it does benefit some children. We need to figure out which ones, and how much [therapy]. And the research we’re sponsoring will help do that.”