Würzburg: Residenz was built to be an eye-popper — and it is This putto decorating a stove in the White Hall of the Würzburg Residenz is the work of Materno Bossi. (Michael Abrams / S&S)

This putto decorating a stove in the White Hall of the Würzburg Residenz is the work of Materno Bossi. (Michael Abrams / S&S) 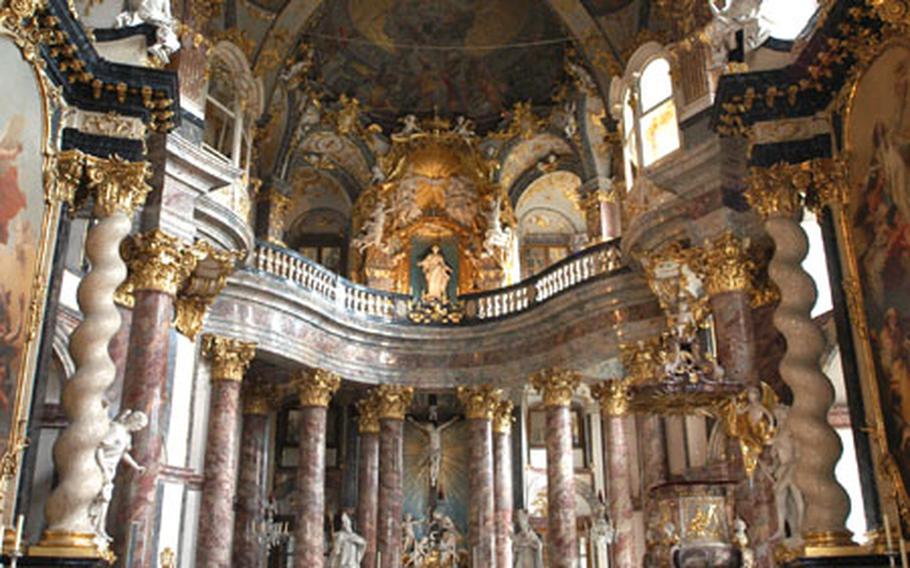 Inside the 18th century Hofkirche (Court Chapel) of the Residenz in Würzburg. (Michael Abrams / S&S) 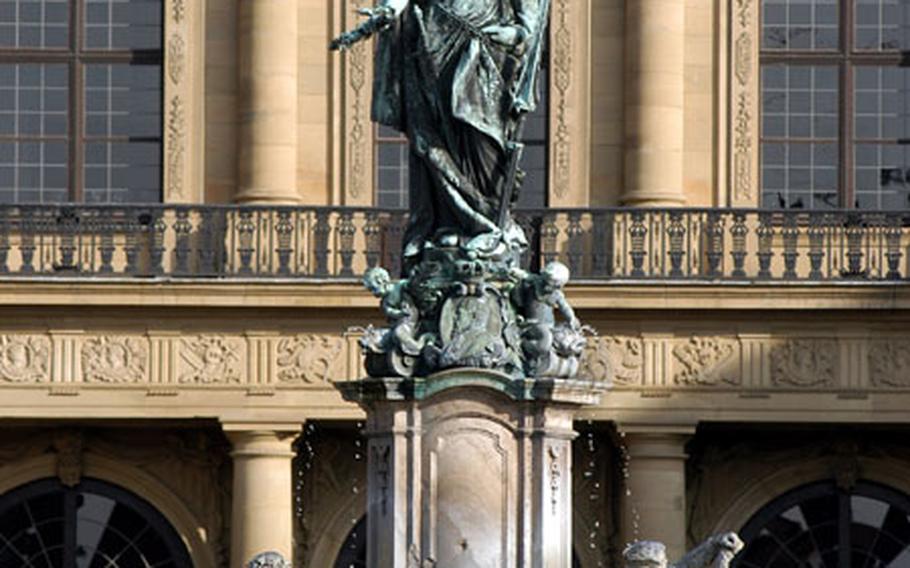 The Franconia Fountain in front of the west facade of the Residenz in Würzburg. (Michael Abrams / S&S) 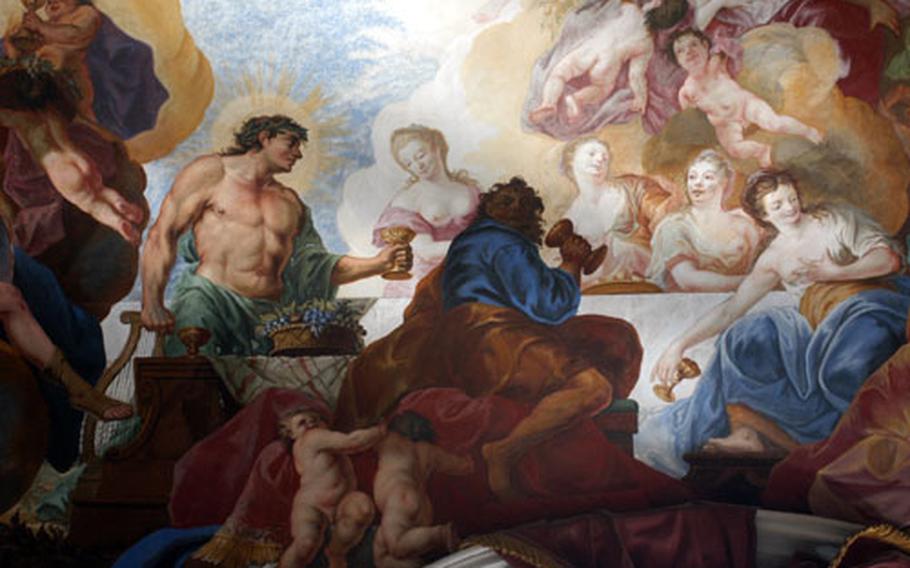 A close-up of the fresco in the Garden Hall on the first floor of the Residenz in Würzburg. It was painted by Johann Zick in 1750. (Michael Abrams / S&S) The gardens and the east facade of the Residenz in Würzburg. (Michael Abrams / S&S)

It&rsquo;s easy for us under-cultured folks to hear words like &ldquo;Baroque&rdquo; and &ldquo;rococo&rdquo; and feel a little dumb.

So instead of letting such fancy words ruin a good time, just allow yourself to be blown away by the over-the-top grandeur of the Residenz palace in W&uuml;rzburg, Germany. It&rsquo;s an obscene display of wealth that is devilishly delicious in its sheer excess.

It&rsquo;s also a good place to learn a thing or two about European history, especially if you&rsquo;re taken through the palace by an enthusiastic tour guide. And you can gawk at all the riches for the price of a four-euro ticket.

For those who know the city of W&uuml;rzburg, the Residenz palace is that giant, yellow building at the bottom of the hill, just before you head up to the U.S. Army Hospital and Leighton Barracks. It could be passed off as a big municipal building &mdash; tall and U-shaped with a big parking lot out front.

But a closer look reveals the building for what it is. The palace&rsquo;s huge, mansard roof is ringed by dozens of small statues. Its court of honor with pillars and arched doorways were made to welcome important guests. And once inside &mdash; well, let&rsquo;s just say it was built to awe.

W&uuml;rzburg for centuries was a place where the big shots came. Royals, bishops and the wealthy crossed paths there. Culture, religion and business were mixed together in the same soup. They spent lots of money trying to win friends and influence people.

In W&uuml;rzburg, the prince-bishop was the man. He controlled both the royalty and the church. From 1200 to 1700, the prince-bishop lived on the Fortress Marienberg. That&rsquo;s the huge building on top of the hill overlooking the Main River.

Unlike Louis XIV in France, who decided to move his court out of Paris to Versailles, the prince-bishops of the Schonborn family built their palace &mdash; and churches &mdash; in town to be closer to the people.

The shell of the Residenz was started in 1720 and finished in 1744, the interior started in 1750, but was updated as the century went on.

All the able-bodied men of the day worked on the palace. It&rsquo;s good to be king &mdash; all the citizens felt it an honor to work on the prince-bishop&rsquo;s new home. Having access to both tax and church dollars helped pay for everything.

The 17th and 18th centuries in Germany were a time when the church was trying to win back its people after the secular, humanistic renaissance years. So they lobbied the citizenry through art that portrayed their power.

Guests would enter the Residenz in horse-drawn carriages. They&rsquo;d get out of their carriages at the foot of a staircase built for big, movie-star entrances.

The long, white marble staircase is within a vault 100 feet high. On the rounded ceiling is a massive fresco painting by the master painter of the day, Giovanni Battista Tiepolo of Venice.

The painting alone measures 90 feet by 60 feet. It is larger than the world&rsquo;s most famous ceiling fresco &mdash; Michelangelo&rsquo;s inside the Sistine Chapel in Italy.

Well-dressed guests would step out of the carriage and promenade up the long, marble staircase. Promenade, you say? Think of waltz music and costumes. The steps were shallow &mdash; only 6 inches high.

Ladies and gentlemen did not climb the steps; they floated up them.

One can imagine them taking 30 minutes to do so, fawning and curtseying and schmoozing along the way.

Such grandeur was the way of the day.

Once atop the staircase, guests would enter the Emperor&rsquo;s Hall.

Inside the great room they&rsquo;d stand on the marble floor and admire the paintings, statues, columns, fireplace and chandeliers. It reminded me of Paris, where one can stand on certain street corners and see 20 different objects of beauty all at once.

Then, there are the nine guest rooms. Each is like a museum in itself. Each ceiling is textured, painted and created just so, each chair a gold-leafed, cushioned throne.

&ldquo;Baroque architects took shapes &mdash; ovals, squares, rectangles and columns &mdash; to their limits,&rdquo; said Mary Waltie, a tour guide for the city of W&uuml;rzburg. &ldquo;It was one of the last great styles.&rdquo;

Soon, Waltie said, architects started repeating themselves (see Neo-classicism). Some, particularly the English, found Baroque to be gaudy and tasteless.

&ldquo;It was so big and chunky compared with what was going on at the time,&rdquo; Waltie said.

Thankfully, the Residenz was not bombed into oblivion.

That&rsquo;s one of the sad facts about W&uuml;rzburg. The British bombed the city on March 16, 1945, when Nazi surrender was imminent. Part of the Allies&rsquo; strategy was to bomb without mercy to the very end. They figured it would destroy the Germans&rsquo; will to fight.

Both wings of the Residenz palace were destroyed. But the middle part with the towering entranceway and staircase survived the shock of the bombs and the citywide firestorm.

Before the bombing, the massive Belgian tapestries that adorn the walls of the rooms were rolled up and taken up the hill to the fortress, where they were hidden in the secret caverns and caves below. Other valuables were taken there as well.

After the bombing, as the destroyed parts of the Residenz were being rebuilt, the valuables were returned and the tapestries were hung back up.

The Mirror Cabinet is one of the rooms that was rebuilt in the 1980s. It&rsquo;s made completely of gold-edged mirrors, painted and engraved with designs. W&uuml;rzburg&rsquo;s own Wolfgang Lenz, a noted modern artist, led the restoration.

Visitors should not expect to take pictures when they visit the Residenz. Cameras are not allowed inside except for those with special permission.

Visitors instead should just soak up the sensations. The gift shops offers books and postcards that capture the Residenz in picture form.

The Residenz is hosting an art exhibit through March 31. Appropriately, the paintings are mostly 17th and 18th century from Venice, whose artists and architects helped conceive and furnish the Residenz.

Behind the building there is a vast garden with terraces, bushes, flowers, canopies and thresholds. And there are even more statues.

A stroll through the garden is the ideal way to finish your tour. Take a seat on one of its granite benches and think about it all.

More to see in Wurzburg

In 1981, UNESCO, the cultural branch of the United Nations, placed the Residenz in W&uuml;rzburg, Germany, on its World Heritage list. It is one 27 sites in Germany and 754 worldwide to be designated, making it eligible for financial aid to help ensure its preservation.

Artists and architects from France, Belgium, Austria, Italy and Germany all had a hand in its design and construction. &ldquo;A synthesis of European Baroque&rdquo; is what UNESCO calls the palace.

While you&rsquo;re visiting the Residenz, it&rsquo;s worth taking a day or two to explore W&uuml;rzburg and its other attractions. Among them:

&bull; Wine cellars: Some of the largest in Europe, including one beneath the Residenz palace.

&bull; Fortress Marienberg, the giant building perched on the west side of the Main River.

&bull; The Cathedral of St. Killiam, begun in the 11th century and rebuilt in 1945. It retains much of its Baroque interior. Next door is the Neum&uuml;nster church with its Baroque fa&ccedil;ade.

&bull; The Mainbr&uuml;cke, also known as the Old Bridge, a pedestrian bridge built in the 15th and 16th centuries and adorned with statues of saints. It connects the road leading between the Fortress Marienberg and cathedral.

&bull; The old Rathaus, or city hall, with sections that date to the 12th century. Its Ratskeller restaurant is one of many good places to eat in W&uuml;rzburg.

&bull; The beautiful 14th century Marienkapelle and next to it the ornate Haus zum Falken, a fine example of Rococo style in southern Germany. Both are on Market Square.

English-language tours are available, including walking tours around both the old town and the Fortress Marienberg and its vineyards and parks.