Take on the Catholic Church, get your own action figure. Martin Luther, the prime mover of the Protestant Reformation as imagined by Playmobile. Available for purchase at the Worms City Museum. (Will Morris/Stars and Stripes)

Take on the Catholic Church, get your own action figure. Martin Luther, the prime mover of the Protestant Reformation as imagined by Playmobile. Available for purchase at the Worms City Museum. (Will Morris/Stars and Stripes) 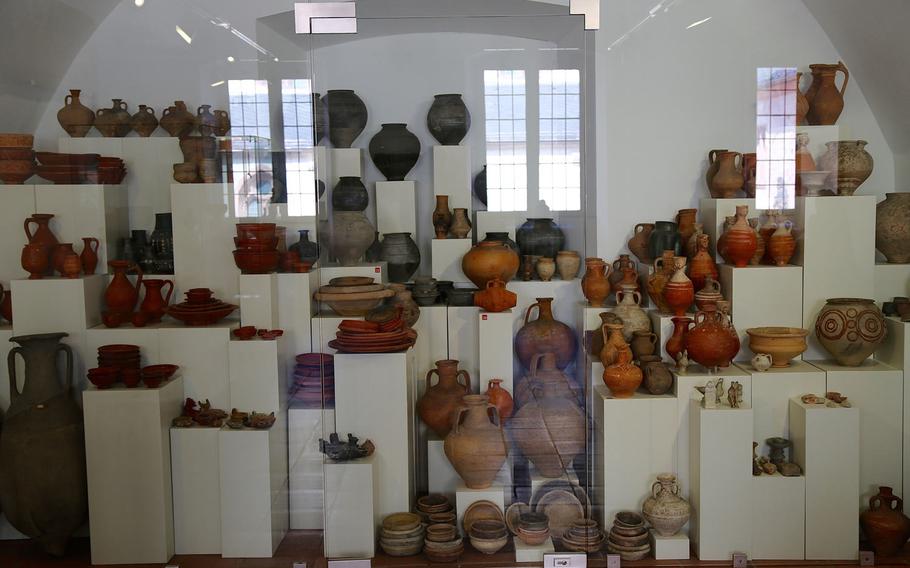 Collection of Roman pottery in an exhibit in the Worms Museum in the Andreasstift. The museum is known in Germany for this collection. (Will Morris/Stars and Stripes) 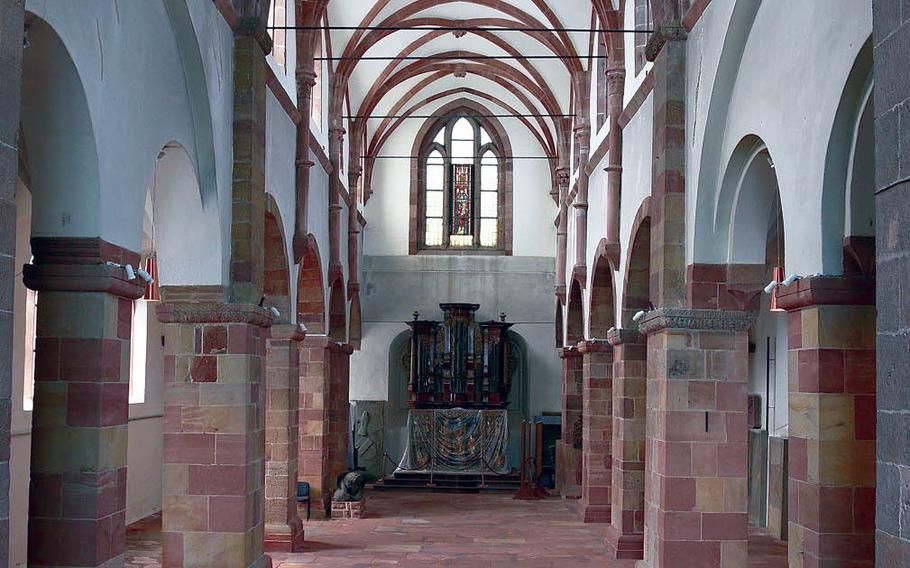 The Andreaskirche in Worms, Germany. Built as part of a monastery complex around 1200, the church and monastery was destroyed and then rebuilt several times before becoming one of the city's four museums. (Will Morris/Stars and Stripes) 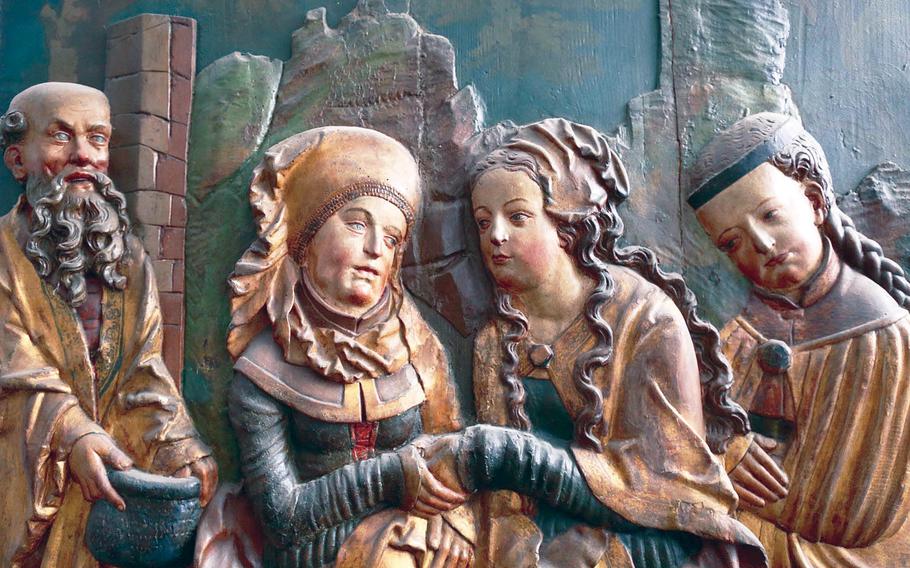 A bas-relief carved from wood during the Middle Ages at the Worms Museum in the Andreasstift. (Will Morris/Stars and Stripes) 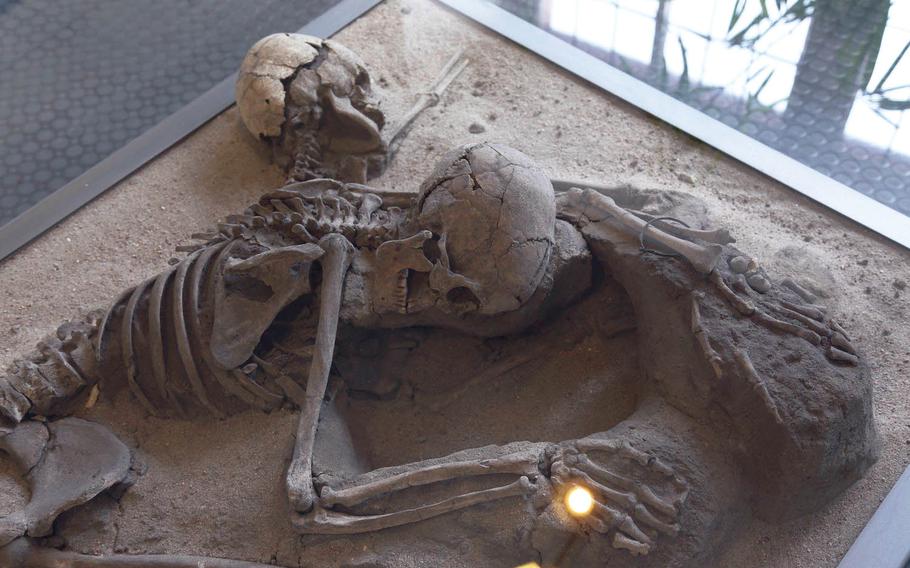 The skeletal remains of a woman and child in the Worms Museum in the Andreasstift. The pair were discovered during excavations in Worms. According to the museum, the woman is in her mid-20s and the child is about 5. (Will Morris/Stars and Stripes)

At first, I figured someone at the museum must have overlooked it. I was standing in front of an amazing bas-relief carving made during the Middle Ages and I wanted to see who carved it. But as much as I looked, I could find no placards describing the exhibits in English. A few minutes later, I went upstairs and began looking at pottery that I can only describe as cavemanish. When I looked for anything written in English to shed light on the exhibit, I realized two things. One, almost everything describing anything in the Worms City Museum is written in German, and two, my high school counselor might have been creepy and crazy, but she was right; I would later regret not taking German in high school. Set in a former church and monastery built around the 12th century, the Worms City Museum is the perfect place to spend a few hours learning some interesting facts about Germany’s Neolithic, Roman and medieval periods of history. Despite my hang-up about the language issue, the museum was entertaining, educational and a few times even a moving experience. There is something about looking at an artifact that is even just a few hundred years old that makes someone immediately feel his or her place in the continuum of human history. One exhibit that I found particularly moving, on the museum’s second floor, is about archaeological digs in and around Worms. A glass case contains skeletons of a woman and a child. Scant details are given of the two and their story — even their relationship is lost to history. But it is obvious by way the bodies are positioned that the two died about the same time. The way the woman is draped over the child shows her tenderness toward the child. Her agony and pain are undeniable and need no explanation. Another exhibit that caught my attention was the collection of Roman coins. Ancient numismatics has always fascinated me, and I’m an avid collector of old coins. I’m amazed at the thought of all of the places the coins have been and all of the people who have touched them. Then I go wash my hands. The last exhibit room in the museum is about Martin Luther, who took on practices of the Catholic Church he saw as corrupt and started the Protestant Reformation. For his trouble, he was declared a heretic and kicked out of the church. Any day trip to Worms should include a visit to this museum. Don’t forget to stop in the gift shop for your Martin Luther action figure. The kids just love it.morris.william@stripes.comwww.twitter.com/willatstripes

Worms City MuseumDIRECTIONS Address: Weckerlingplatz 7, 67547 Worms, Germany. Go east on the A6 for about 35 minutes until it intersects with the A9 and turn north toward Worms. Follow the A9 until it intersects with highway 47 and turn left. When the road makes an abrupt right turn, park your car and look for the spires. TIMES 10 a.m. to 5 p.m. Tuesdays-Sundays COSTS Adults, 3 euros; 1.30 euros ($1.57) for children in groups. FOOD There are numerous eateries around the museum. INFORMATION Phone: (+49) (0) 624-194-6390, email: museum@worms.de, website: tinyurl.com/yd42rx2v