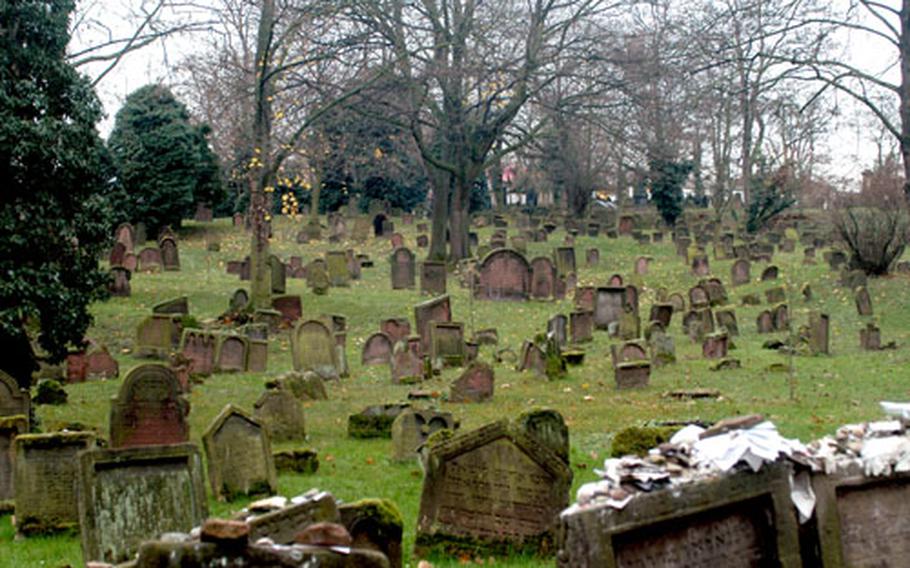 More than 2,000 people are buried in the Jewish cemetery. The green expanses of the cemetery, which dates to the 11th century, are now the citys of Worm’s “breathing space.” (Nancy Montgomery / S&S)

More than 2,000 people are buried in the Jewish cemetery. The green expanses of the cemetery, which dates to the 11th century, are now the citys of Worm’s “breathing space.” (Nancy Montgomery / S&S) 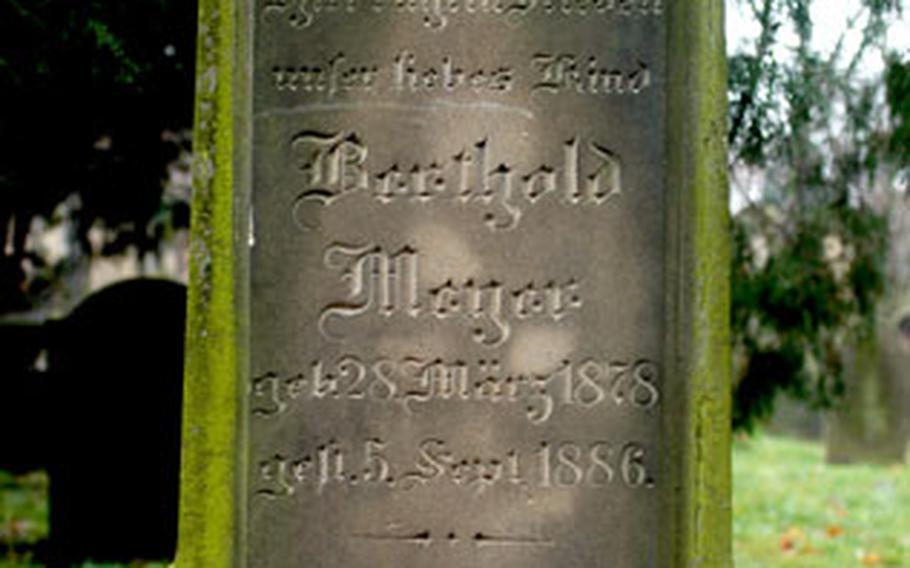 A headstone from the Jewish cemetery in Worms, Germany, which was closed in 1911. (Nancy Montgomery / S&S) 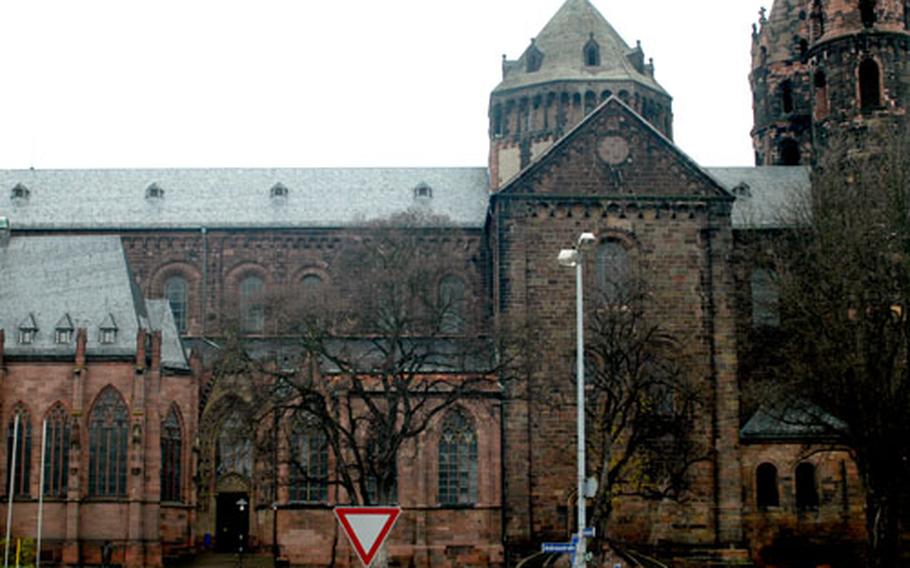 St. Peter’s Cathedral is one of the three “imperial cathedrals,” along with those in Speyer and Mainz. (Nancy Montgomery / S&S)

A visit to Worms on a cold, dark Monday is not full of frivolity.

For one thing, on Mondays, the museums are closed. That leaves one traipsing between sites &mdash; an imperial cathedral, various churches and an ancient Jewish cemetery &mdash; that are designed to make men ponder eternity, mortality and why one is still in Germany in the winter.

Worms&rsquo; history is a serious one, and one imbued with religion. As the very Catholic city where Martin Luther was called to account in 1521 and refused to recant his 95 theses, it&rsquo;s important in the Reformation and the beginning of the Enlightenment.

The city&rsquo;s sites &mdash; burned, rebuilt, bombed, rebuilt &mdash; also bring to mind the destructiveness of humankind, as well as its doggedness to endure and try again.

The grandest of these is St. Peter&rsquo;s Cathedral, one of the finest examples of Romanesque architecture in Europe. It&rsquo;s one, of three &ldquo;imperial cathedrals&rdquo; on the Rhine and the city&rsquo;s major landmark. It has four towers and two domes erected in the 11th and 12 centuries and representing the church and state of the High Middle Ages.

Inside, its massive, vaulted ceilings and huge altar glowing gold in the cathedral&rsquo;s gloom has the effect of making the visitor feel humbled and small.

One part of the sprawling cathedral was refurbished in the Baroque style, according to a city pamphlet, &ldquo;after the destruction of the town in 1689.&rdquo;

The French destroyed the city that time, during the Palatine War of Succession, also known as the Nine Years&rsquo; War and the War of the Grand Alliance, and which pitted The Holy Roman Emperor and German Protestant princes against an expansionist France.

The townspeople rebuilt. Then during World War II, on the night of February 21, 1945, Allied bombers destroyed an estimated 39 percent of the city.

But what the cathedral endured pales beside that of the city&rsquo;s synagogue. It was first built in 1034, and is thought to be the oldest synagogue still in existence north of the Alps. But that distinction took blood, sweat, toil and tears to accomplish.

The building was destroyed by Crusaders in 1174 and rebuilt. But that was just the first time. &ldquo;Despite destruction on numerous occasions &mdash; the plague: 1349, social unrest: 1615, and destruction of the town: 1689 &mdash; the synagogue survived essentially until 1938,&rdquo; according to a synagogue pamphlet. The Nazis destroyed the synagogue. And the community of Jews in Worms, dating to the 10th century &hellip; &ldquo;was exterminated,&rdquo; as a city tourist document puts it.

The synagogue was rebuilt again in 1961, and, according to Dieter Kaffenberger, who works there, has since hosted many bar mitzvahs for the sons of U.S. soldiers.

Today&rsquo;s congregation, he said, is composed of 130 Russian Jews.

One of the most unusual sites Worms has on offer is the &ldquo;Holy Sand,&rdquo; or old Jewish cemetery. Just a few minutes from the various other sites &mdash; all easy accessible by foot &mdash; the cemetery was the burial spot for the city&rsquo;s Jews from 1078, when a man named Jakob Bachur was buried there, until it closed in 1911.

Now it&rsquo;s a green space &mdash; &ldquo;the breathing space of the city,&rdquo; according to city tourism officials &mdash; filled with trees and grass and more than 2,000 moss-covered gravestones. Inscribed in German or Hebrew, they remember the Meyers, the Honigs, the Mannheimers and Wolfskehls, who all died before their descendants would perish, murdered, en masse.

On the QTDIRECTIONS: Worms is less than an hour from Heidelberg. Take Autobahn 656 to Autobahn 6 toward Frankfurt/Saarbrucken, then follow the A6 to Saarbrucken/ Kaiserslaughtern/Ludwigshaven. Merge onto the B9 toward Worms. The B9 turns into Ludwigstrasse. Turn left at the Hagenstrasse, then right on the Marktplatz.

TIMES: The Jewish Cemetery and synagogue are open most days, as are most of the churches and the cathedral. Word to the wise: the city&rsquo;s several museums are closed on Mondays.

COSTS: The cemetery, churches and synagogue are all free of charge, although the cathedral has a sign asking for donations.

FOOD: Plenty of choices on the city&rsquo;s pedestrian-only shopping area.

INFORMATION: For more information, visit the English section of the town&rsquo;s Web site.