Wertheim: Shop ‘til you drop 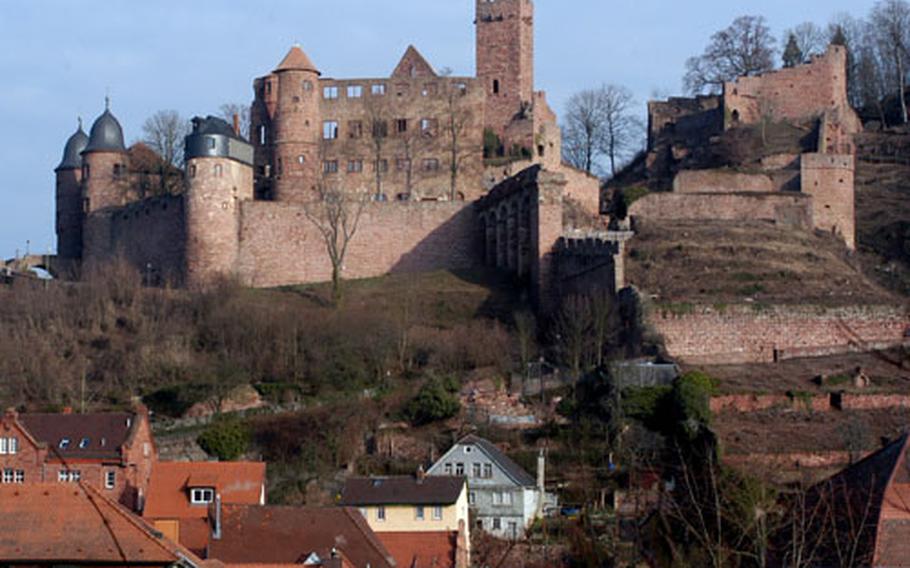 Wertheim castle towers above the town, and was once the home of the counts of Wertheim. Built around 1100, it was damaged in the 17th century during the Thirty Years War. (Michael Abrams / S&S)

Wertheim castle towers above the town, and was once the home of the counts of Wertheim. Built around 1100, it was damaged in the 17th century during the Thirty Years War. (Michael Abrams / S&S) 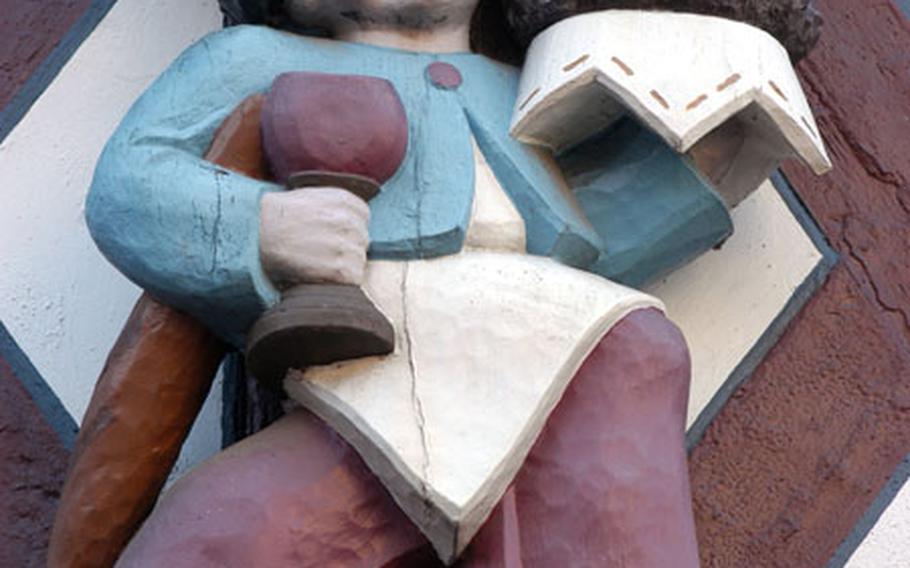 A figure of a baker carrying a cake, bread and a glass of wine decorates a 16th century half-timbered house on Wertheim&#39;s martket place. The house once belonged to a knight, then the court baker and has housed the Cafe Hahn since 1886. (Michael Abrams / S&S) 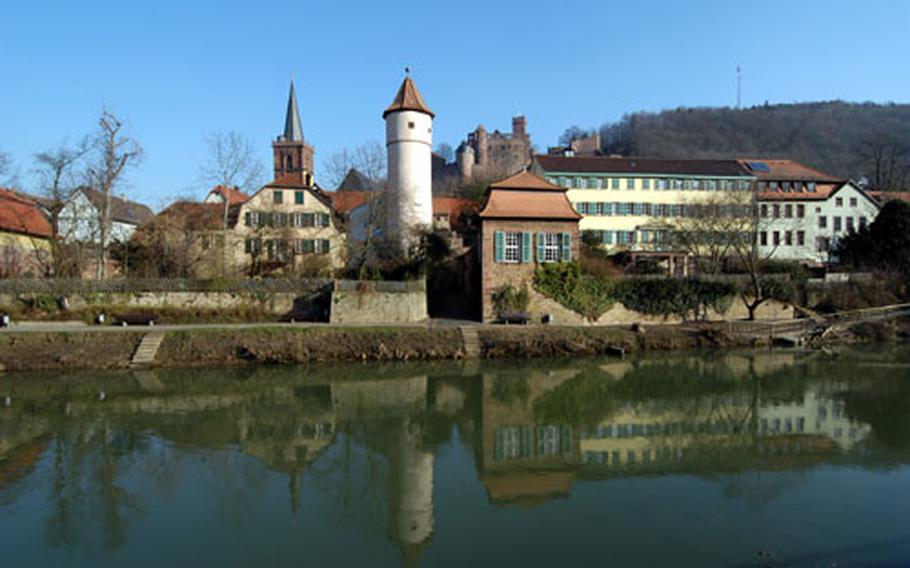 The old town of Wertheim is reflected in the water of the Tauber river. The city is located where the Tauber flows into the Main. The Kitsteinturm, or tower, is at center, with the steeple of the Stiftskirche at left, and the castle towering over the city in the background at right. (Michael Abrams / S&S) 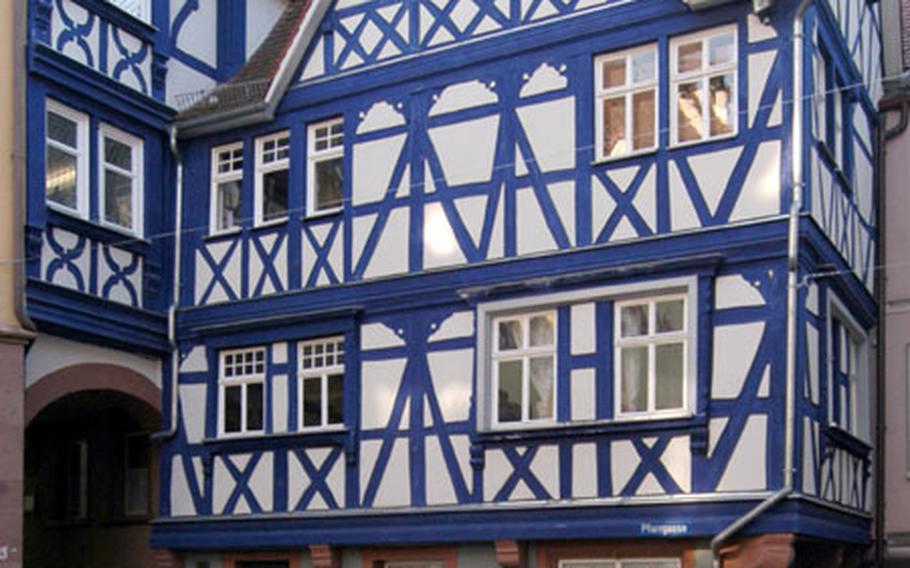 The Blaues Haus, or blue house, in Wertheim dates back to 1793. It gets its name from its half-timbered beams that are painted blue with an expensive paint made from cobalt pigments. (Michael Abrams / S&S)

Looking to spend a day of culture and commerce, sight-seeing and shopping? Then head to Wertheim, Germany, a little town at the confluence of the Main and Tauber rivers that offers both.

Because of its location, Wertheim, about 20 miles west of W&uuml;rzburg, has seen a lot of commerce over the ages, as merchants brought their goods down the rivers to trade.

The town, first mentioned in 774, is full of the things that are popular with tourists: cobblestone streets, old churches, half-timbered houses, castle ruins and good local cuisine.

Even though you might not be hungry yet, let&rsquo;s start with food and drink. Wert- heim is in the Franconian region of Bavaria. To narrow it down, it is in what is called the Tauberfranken region. This is an area known for its good wines, that come in a Bocksbeutel, a bottle with a short neck and a round body. Franconia is also known for its beer, especially the amber-colored Landbier. The food is hearty too &mdash; spicy bratwurst, game and fresh fish. Look for restaurants with signs that say: Gutb&uuml;rgerliche K&uuml;che or Fr&auml;nkische Spezialit&auml;ten.

Keep that in mind for lunch or dinner, and go see the sights.

If you parked along the Main, the first thing you&rsquo;ll see is the imposing Spitze Turm, a tower of the old city walls. It is 120 feet tall and more than 6 feet thick. It is possible to enter town here, but if you walk up the Main just a little bit, you can enter through the Maintor, or gate, and walk up the shop-lined, cobblestone Main Gasse to the Marktplatz, where a grocers&rsquo; market is held Wednesdays and Saturdays. Check out the half-timbered houses on the square. The one housing the Cafe Hahn was built in the 16th century and features two carved figures of bakers on the facade.

At the end of the market place is the Engelsbrunnen, an ornate well topped by two angels holding the Wertheim coat of arms.

Head down to the Tauber, cross the river on the pedestrian bridge, then walk up river toward the other pedestrian bridge. Check out the view of old Wertheim with the Kittstein gate and tower with the steeple of the Stiftskirche on the left and the castle towering above on the right.

Cross back over and see the rest of the sights: the Hofhaltung, a ducal building from 1781 that now houses the town hall; the Glasmuseum, dedicated to things made of glass &mdash; beads, eyeglasses, lenses, vases and more; the Stiftskirche, a church begun in 1383 and featuring a 110-foot-tall tower; and the Killianskappelle, a Gothic chapel built in 1469. Behind the chapel are the stairs and path that lead to the castle, about a 15-minute walk.

After all the culture, it&rsquo;s time for some Franconian cuisine and commerce.

A whole new dimension to shopping in the Wert- heim area began when the Wertheim Village opened last November. It is a factory outlet mall, much like those in the States, with brand names at slashed prices. Twenty of the projected 60 stores are open, with more to open soon.

The names are familiar: Reebok, Timberland, Quicksilver, Bally and Versace to name a few.

Walk through a gate to enter the village. Shops are lined up next to one another along a pedestrian lane. Supposedly the village is designed in Franconian-style architecture, but it wouldn&rsquo;t seem out of place in central Florida.

The prices here are cheaper than they are, in say, downtown W&uuml;rzburg or Frankfurt. The shops are said to offer assortments of last year&rsquo;s season and discontinued pieces at a price reduction of at least 30 percent.

With the sky-high euro, the prices might not be cheaper than on the Web or at your local exchange, but with a large selection to choose from, bargains can be found. And you get the fun of almost endless shopping.

Directions: Wertheim is on the Main River about 20 miles west of W&uuml;rzburg and 40 miles east of Hanau. Wertheim Village Outlet is right off Autobahn 3 at the Wertheim/Lengfurt exit (No. 66).

Cost: In Wertheim, it is best to park at one of the marked parking areas. At 40 euro cents an hour, or 2 euros for the day, it is one of the best deals around for a popular tourist town. Parking at Wertheim Village is free. The stores there take credit cards.

Times: Wertheim can be visited any time. Its glass museum is closed for the winter, and does not reopen until April 1. Wertheim village is open from 10 a.m. to 8 p.m Monday through Saturday. It is also open Sunday on April 4 and Oct. 3 from 1 to 6 p.m. It is closed on German holidays.

Food: There are plenty of restaurants in Wertheim, many serving traditional Franconian fare. An Italian restaurant is to open soon at Wertheim Village, and after exiting the autobahn, you will find the Golden Arches on one side of the highway and the Home of the Whopper on the other.

More information: Visit the Web sites at www.wertheim.de and www.Wertheimvillage.com. The Wertheim tourist office is on Wenzelplatz. There is also one at Wertheim Village.