Weisswasser: Town offers a look into Germany’s not-so-distant past 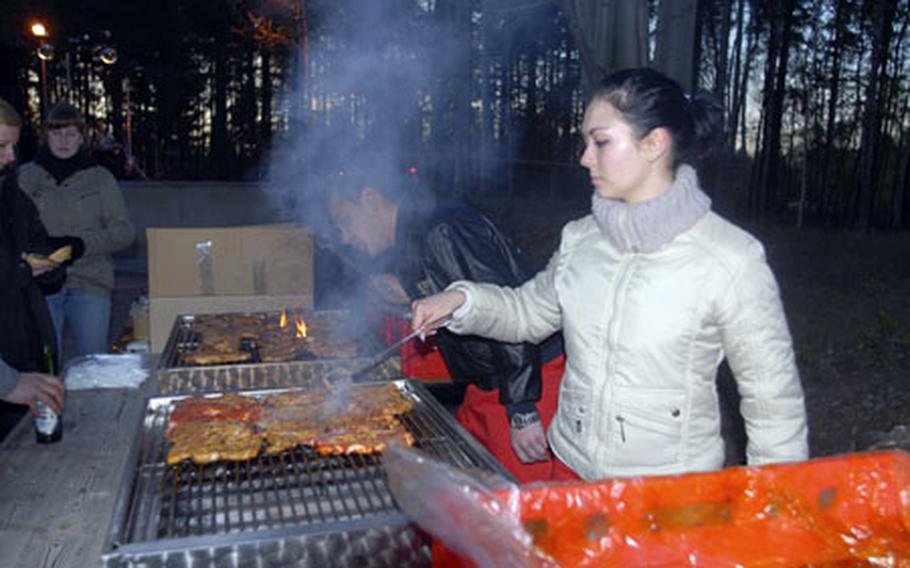 The best food to be had in Weisswasser is served up at private parties where you can enjoy the local specialty -- marinated barbecued beef washed down with a cold beer. (Seth Robson / S&S)

The best food to be had in Weisswasser is served up at private parties where you can enjoy the local specialty -- marinated barbecued beef washed down with a cold beer. (Seth Robson / S&S) 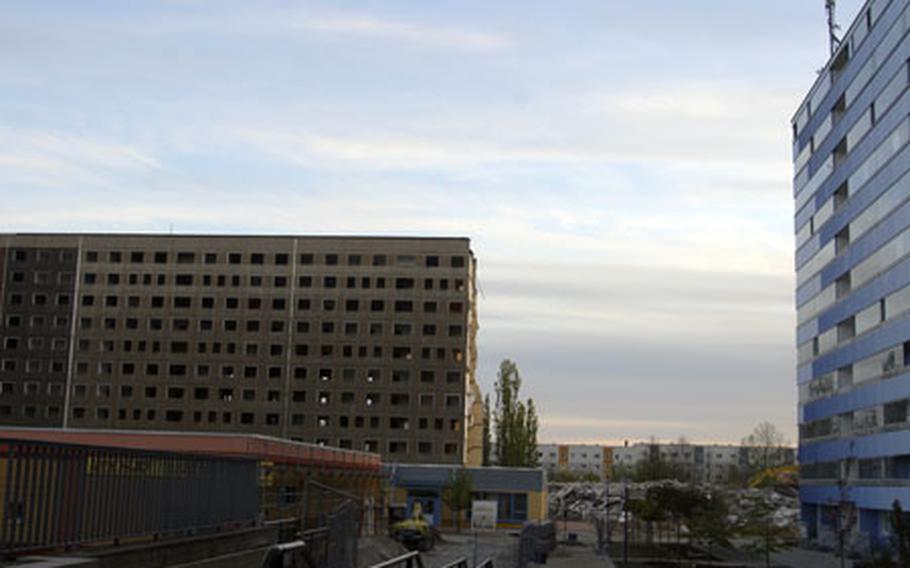 Some old communist-style appartment blocks are being demolished while others are being renovated in Weisswasser, where the population has dropped by about 50 percent since the fall of the Berlin Wall in 1989. (Seth Robson / S&S) 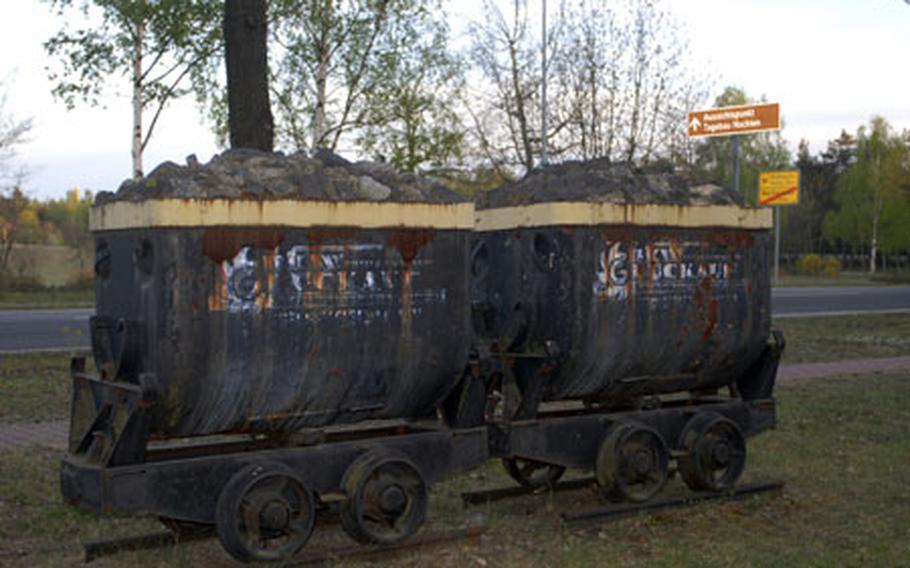 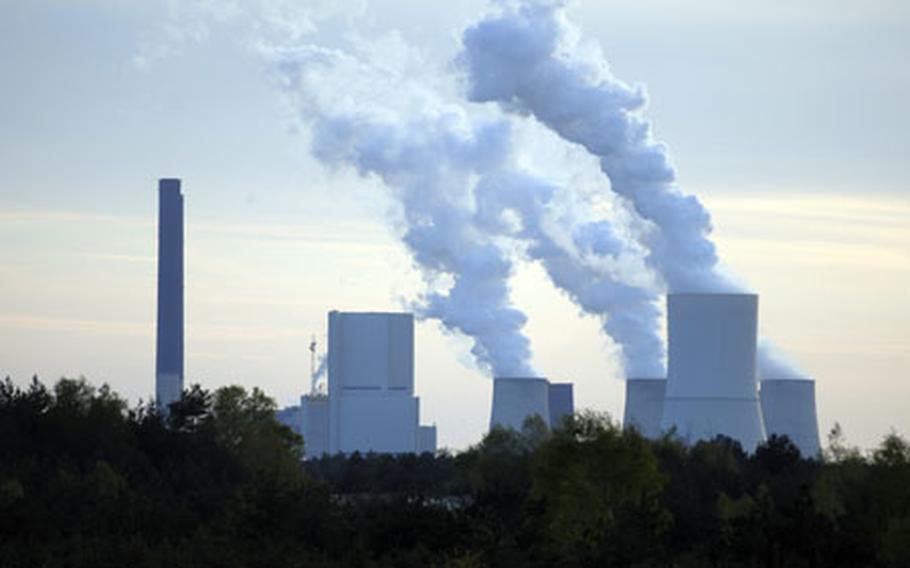 A massive coal-fired power plant casts a shadow over the forest a few miles from Weisswasser. (Seth Robson / S&S)

&ldquo;We&rsquo;re not communists, we&rsquo;re anarchists,&rdquo; claim the folks behind a table covered in left-wing pamphlets and T-shirts in the former East German town of Weisswasser, near the Polish border north of Dresden.

They had gathered near a crowd in town for another cause, but the relics of communism were all around: row upon row of bleak apartments, derelict coal mining equipment, towering smokestacks from old factories and a giant coal-fired power plant just outside town.

The apartments were built by the communists to house a population made homeless by the Soviet Red Army, which destroyed much of Weisswasser during World War II.

Nowadays, some apartment buildings sport chic two-tone paint jobs, but others are empty and earmarked for demolition. The town&rsquo;s population has dropped from almost 40,000 at the fall of the Berlin Wall in 1989 to about half that today.

Locals say the 20 percent of the population who are unemployed need cheap apartments, but there are still a lot of vacant buildings falling prey to mold and decay.

Despite the economic malaise, there is plenty for curious visitors to see and do in Weisswasser.

The surrounding area includes numerous hiking trails around the many small lakes and ponds. In the local dialect, the town&rsquo;s name means &ldquo;clear water,&rdquo; and the lakes are popular for swimming, rowing and windsurfing.

The town is surrounded by the largest military training area in Germany. It covers more than 150 square miles (about twice the size of the U.S. Army&rsquo;s Grafenw&ouml;hr training area) of sandy forest trails and ranges.

Ice hockey fans might know the arena that is the home of Eissport Weisswasser &mdash; the team known as the Foxes. It was the most successful club in East Germany&rsquo;s Premier League and now plays in the German second division. If you want, you can go skating or attend a Saturday night ice disco in the rink where the players sharpen their skills and still play their games.

The town also hosted an international rugby tournament to discourage racism in sport in April. Tournament organizers said the theme was a reaction to racism among German soccer fans last year during the World Cup.

Families might want to check out the town&rsquo;s zoo, the Tierpark Weisswasser, next to Lake Jahnteich. It features more than 300 animal species.

The town is not exactly a mecca for gourmets. There are only a few restaurants scattered about the town center, but prices are cheap. A better option is to get invited to a party &mdash; like the one going on the day of the rugby tourney &mdash; so you can try the local specialty: marinated barbecued beef washed down with cold beer.

Weisswasser is not the sort of place you would go out of your way to visit. But if you are keen to learn more about the legacy of communism in East Germany or are looking for a stop on the way to Poland, check it out.

Directions: From the Grafenw&ouml;hr- Vilseck area, take A93, A72 and A4 past Dresden, and then take exit 90 for Bautzen-Ost/Weisswasser. Follow B156 north to Weisswasser.

Times: The ice hall is open to the public Aug. 15 through April 7. The glass museum is open 10 a.m. to 3 p.m. on Mondays, Tuesdays and Thursdays, and until 5 p.m. on Wednesdays, Sundays and holidays. The zoo is open 9 a.m. to 6 p.m. April to October, and for slightly shorter hours the rest of the year.

Food: There&rsquo;s a limited selection in town &mdash; but food is inexpensive. Asian takeaways downtown include soup from 1.50 euros, noodles from 2.50 euros and rice dishes from 3.50 euros.

Information: The Weisswasser town Web site is www.weisswasser.de. Its English version has links to individual attractions.