Weilburg: While away a day 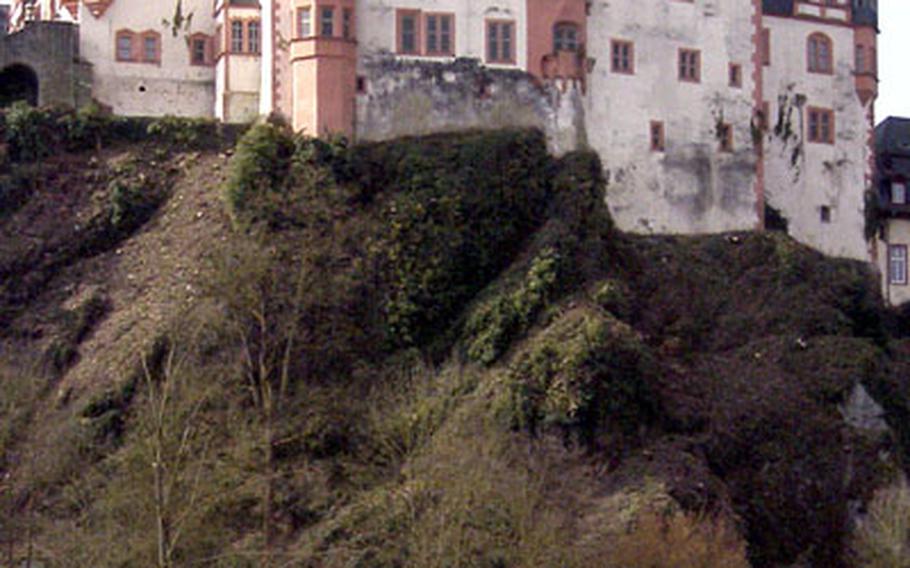 Weilburg Palace, and the old town sits high on a bluff above the Lahn, surrounded by the river on three sides. (Michael Abrams / S&S)

Weilburg Palace, and the old town sits high on a bluff above the Lahn, surrounded by the river on three sides. (Michael Abrams / S&S) 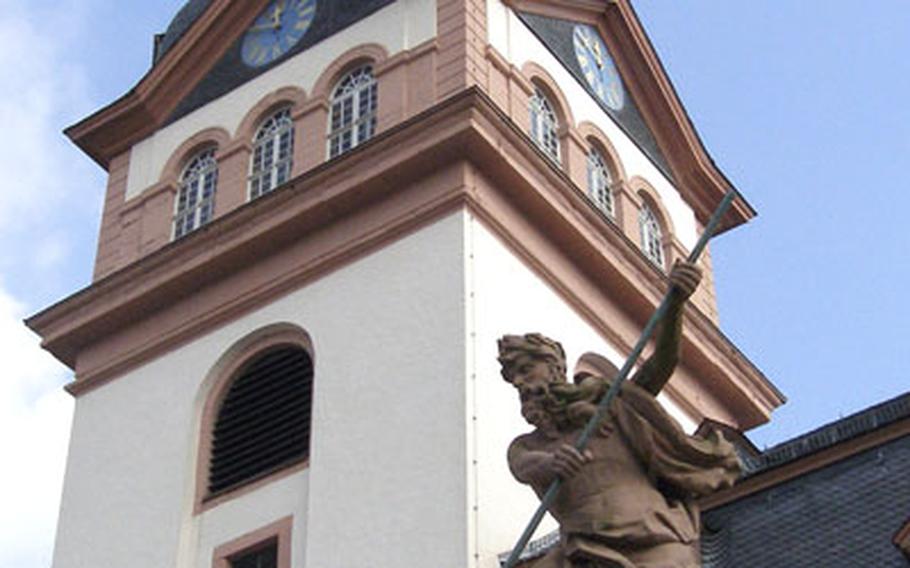 The Neptune Fountain on Weilburg&#39;s market square, in front of the Palace Church. (Michael Abrams / S&S) Surrounded on three sides by Germany&rsquo;s Lahn River, the town of Weilburg sits on a palace-capped promontory, high above the valley.

First mentioned in 906, much of the town&rsquo;s history runs parallel to the palace and the counts of Nassau who owned it. First a fortress stood on the hill, later a four-wing renaissance palace was built, and finally baroque buildings, a church and palace gardens were added.

Although no longer a walled city, one of the gates, the Landtor &mdash; land gate &mdash; still stands and motorists pass through it to enter Weilburg. Behind it is the Stadtturm, the only medieval guard tower still standing.

The palace takes up much of Weilburg&rsquo;s old town. The inner courtyard is a beautiful example of northern European renaissance architecture with its half- timbered beams, arches and the Stadt-pfeiffer tower. The palace&rsquo;s baroque extensions have been turned into a hotel and a civic hall.

If you like flowers, fountains, statues, trees and benches to sit on, the palace gardens will please. The two orangeries are still in use. The upper one is used for exhibits and concerts, while the lower &mdash; modeled after the one in Versailles &mdash; features a cafe, and still houses the garden&rsquo;s citrus trees in the winter.

Outside the palace gates is the Bergbau und Stadtmuseum, or Mining and City Museum. Its main attraction is the Tiefe Stollen, a full-size replica of a local iron ore mine.

Attached to the palace but facing the market place is the early 18th-century Schlosskirche, or Palace Church, one of the best examples of a Protestant baroque church in Hesse. In front of it is the Neptune fountain, topped by a statue of the Roman sea god.

A walk through the old town is short, with many half-timbered houses and, for a town its size, a lot of cafes.

If you walk the streets down to the river you&rsquo;ll come to the Steinerne Br&uuml;cke, the old stone bridge across the Lahn. From here there is a great view of the palace towering over the river.

Walk along the river (crossing the busy highway) and you come to the Weilburg ship tunnel.

Opened in 1847, this 645-foot-long tunnel shortened boat trips along the Lahn, bypassing the loop around the town and the river&rsquo;s rapids. Its economic feasibility ended a mere 15 years later when the railroad connected Giessen and Koblenz, curtailing much of the commercial transportation on the river.

Two sites outside of the city are worth seeing: the Kubacher Kristallh&ouml;hle and the Tiergarten Weilburg.

The Kristallh&ouml;hle, or crystal cave, is a 350-million-year-old cavern with a 90-foot-high &ldquo;hall.&rdquo; Discovered in 1974, it is Germany&rsquo;s only cave with calcite crystals. Only a small part of the cavern has been explored. There is also a cave museum and an open-air rock exhibit.

The Tiergarten is an animal park on the site of the counts&rsquo; hunting enclosure. A 6-foot-high stone wall from the 17th century still surrounds the 227-acre park. Deer, moose, wolves, otters, horses and wild cats are among the animals living in the Tiergarten. Even if the animals are sleeping &mdash; or hiding &mdash; the park provides a peaceful place to stroll.

On the QTDirections: Weilburg is in central Germany, between Limburg and Giessen. From Giessen, take highway B49 west until you see signs for the town. From Hanau, take Autobahn 45 to the Wetzlar-Ost exit and head toward Limburg. From Wiesbaden, take A3 toward Cologne, exit at Limburg and take B49 east to Weilburg. The Tiergarten and Kristallh&ouml;hle are just off B456 heading toward Bad Homburg.

Information: There are German-only Web sites for the town at www.weilburg.de and the cave at www.kubacherkristallhoehle.de.