Village in Japan claims it has Jesus' burial spot 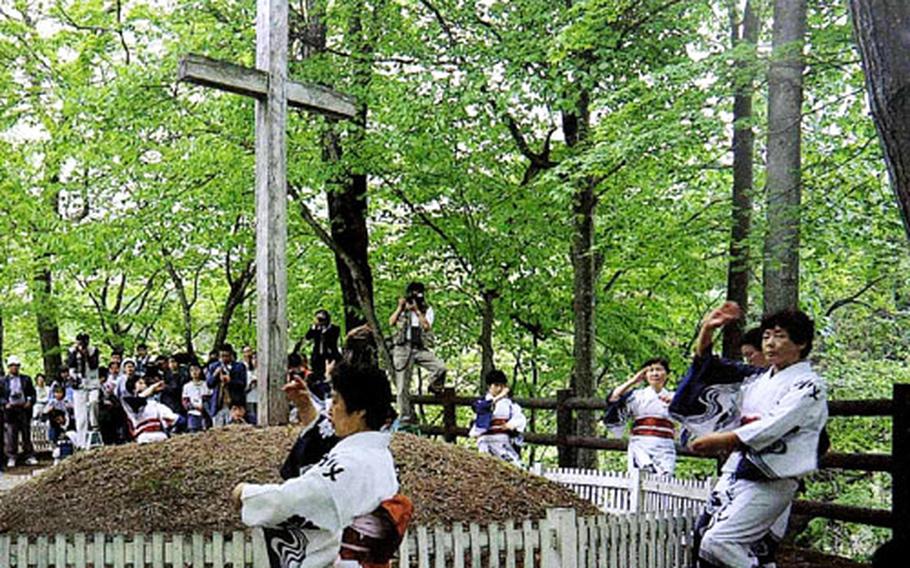 During the first Sunday in June, a small festival featuring singing is staged at the tombs that some say hold the body of Jesus in Shingo, Japan. (Courtesy Shingo Village)

During the first Sunday in June, a small festival featuring singing is staged at the tombs that some say hold the body of Jesus in Shingo, Japan. (Courtesy Shingo Village) 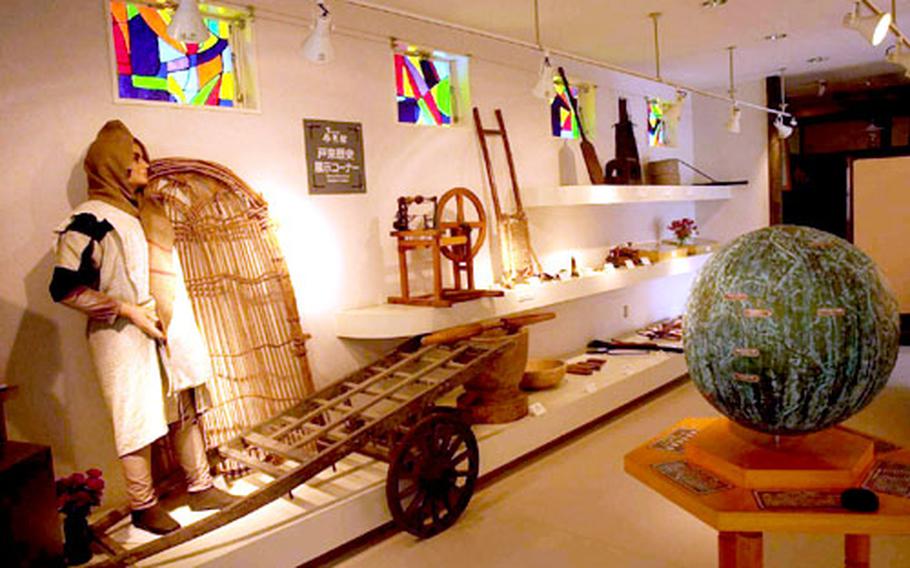 Implements used by farmers when Shingo was known as Herai Village are displayed at the museum. (Wayne Specht / S&S) 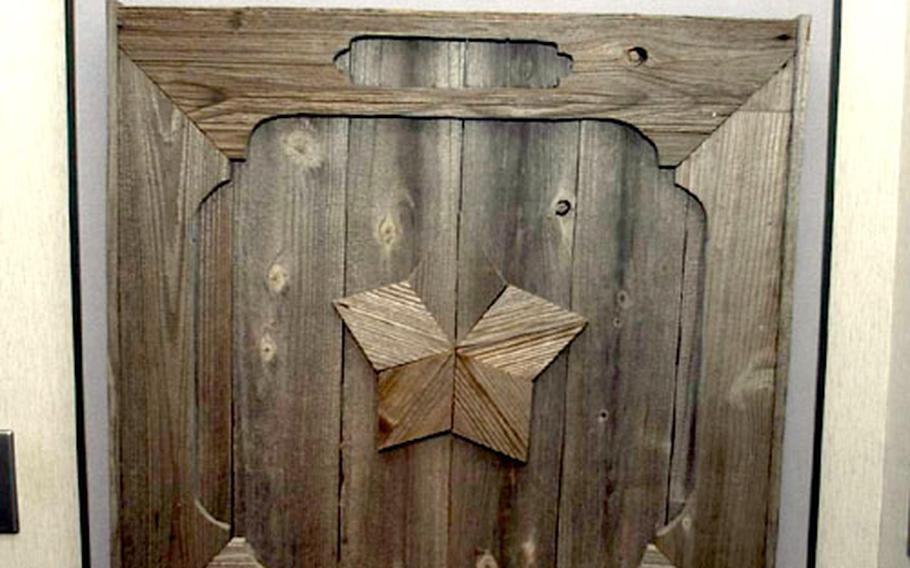 The museum holds a piece of the Sawaguchi’s barn bearing a symbol that somewhat resembles a Star of David — which would normally have six points. (Wayne Specht / S&S) 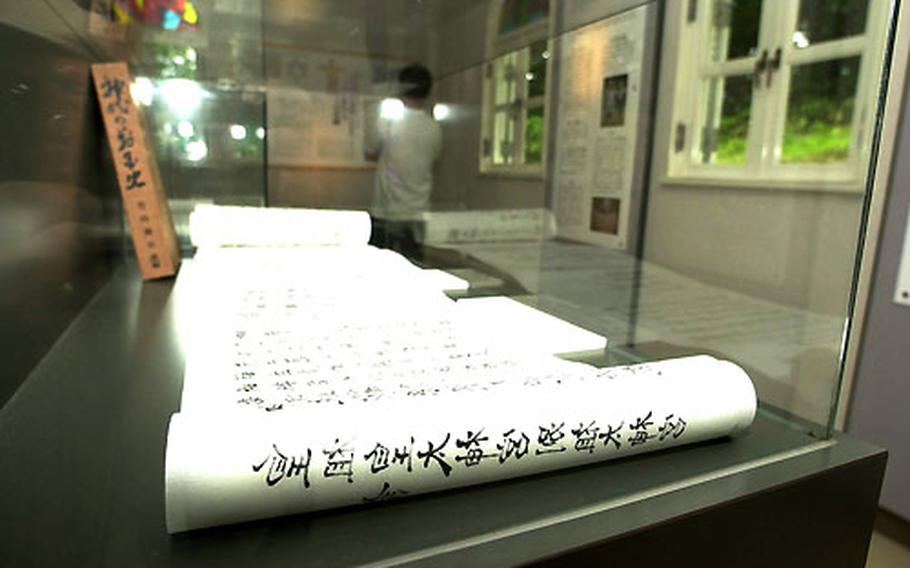 A supposed copy of what is purportedly Jesus’ will is encased in a glass display case at the museum in Shingo. (Wayne Specht / S&S) 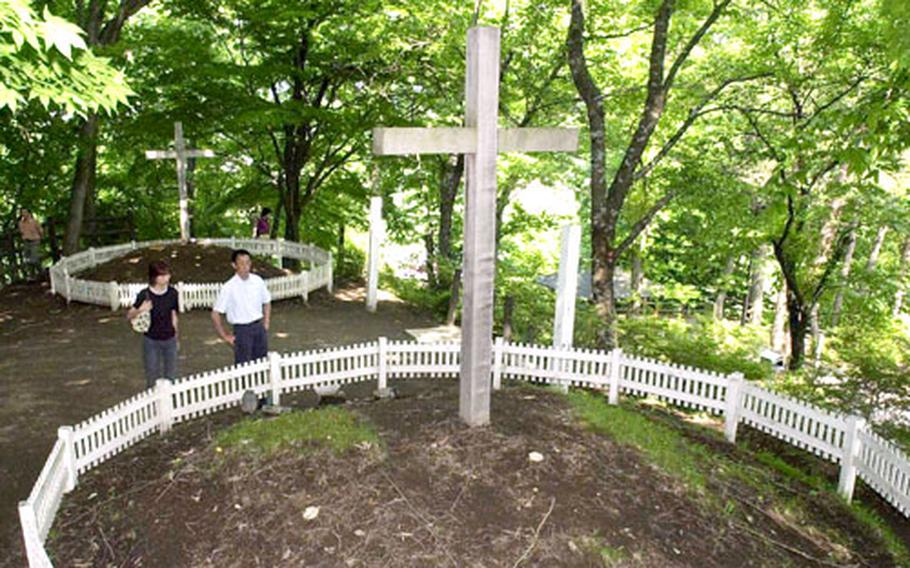 Visitors pause at the purported grave of Christ in Shingo, Japan. Behind them is the supposed grave of Jesus&#39; brother, Isukari. (Wayne Specht / S&S)

In the land of Buddhism and Shintoism, the history of Christianity takes a radical turn:

A man fleeing the Middle East 2,000 years ago crosses Siberia and Alaska.

After marrying a local woman who bears him three children, he lives out his days in Herai, Japan &#8212; what today is Shingo, a 90-minute drive southwest of Misawa Air Base.

Some there say the man was Jesus Christ. They also claim it was his twin brother, Isukiri, who died on the cross.

The legend begins in 1935: Scrolls found in Ibaraki Prefecture in central Japan say during his &#8220;lost&#8221; years, Christ traveled to Japan for spiritual training, according to the English-language storyboards inside Kirisuto No Sato-Den-Shookan, Shingo&#8217;s Museum of Christ.

The story also goes that Christ then returned following the crucifixion of a brother, and he supposedly lived to be 106.

This accounting doesn&#8217;t mesh with Christian beliefs that Christ isn&#8217;t buried because he is in heaven, ascending there 40 days after returning to life following the crucifixion.

Museum documents explain some of the village&#8217;s customs, such as marking a cross on a child&#8217;s forehead when it first leaves the house, and why the father of Toyoji Sawaguchi, scion of a local rice growing family, had &#8220;blue eyes like a foreigner.&#8221;

The Sawaguchi family sold the land where the graves are located to the village years ago. In 1997, village officials decided to build the museum there. Now, more than 15,000 people visit annually.

Over the years, gift shops have sold Jesus coasters and thermometers and &#8220;Kirisuto No-Sato&#8221; sake.

Years ago, archaeologists confirmed a very old crypt exists at the site. But the occupant&#8217;s identity was never established.

Some residents believe it could be a Sawaguchi family member. Others speculate the grave contains an early leader of Japan&#8217;s indigenous Ainu population, or possibly an early Christian missionary.

The museum stands in the shadow of two circular graves surrounded by white picket fences and marked with relatively new-looking 8-foot-tall Christian crosses.

It is said one tomb holds the ears of Christ&#8217;s brother, Isukiri, and a lock of his mother Mary&#8217;s hair, while Christ himself is in the other tomb.

On the first Sunday of each June, yukata-clad dancers perform at the grave site and sing in a language no one understands, but it is believed to be a form of Hebrew.

Dozens of visitors make a short pilgrimage up the hill to the graves. Some leave small offerings in a basket there; five-yen coins, considered lucky, are common.

Poliquin tries to see the humor in the heresy.

Directions: The Tombs of Christ is a 90-minute drive southwest of Misawa Air Base.

Hours: The museum is open from 9 a.m. to 5 p.m. April through October.

A sign near the tomb of Christ explains the legend of how Jesus returned to Japan:

"When Jesus Christ was 21 years old, he came to Japan and pursued knowledge of divinity for 12 years. He went back to Judea at age 33, and engaged in his mission. However, at that time, people in Judea would not accept Christ&#8217;s preaching. Instead, they arrested him and tried to crucify him on a cross. His younger brother, Isukiri, casually took Christ&#8217;s place and ended his life on the cross.

"Christ, who escaped the crucifixion, went through the ups and downs of travel, and again came to Japan. He settled right here in what is now called Herai Village, and died at the age of 106.

"On this holy ground, there is dedicated a burial mound on the right to deify Christ, and a grave on the left to deify Isukiri.

"The above description was given in a testament by Jesus Christ."