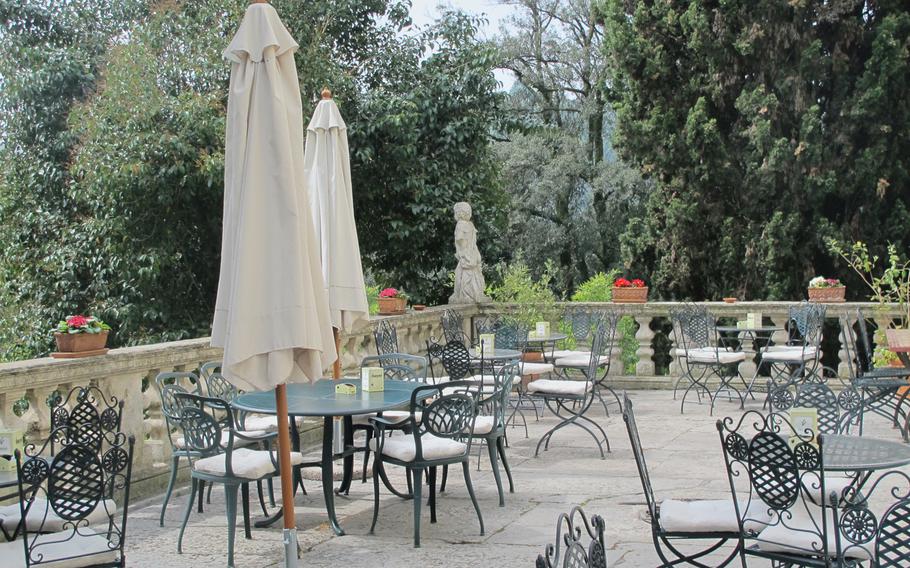 Buy Photo
Giovanni Battista Tiepolo's fresco at Villa Valmarana ai Nani in Vicenza depicts the story of Achilles being held by his hair by the goddess of wisdom, Artemis. She is preventing him from attacking Agamemnon, who had stolen Achilles' slave girl. (Nancy Montgomery/Stars and Stripes) 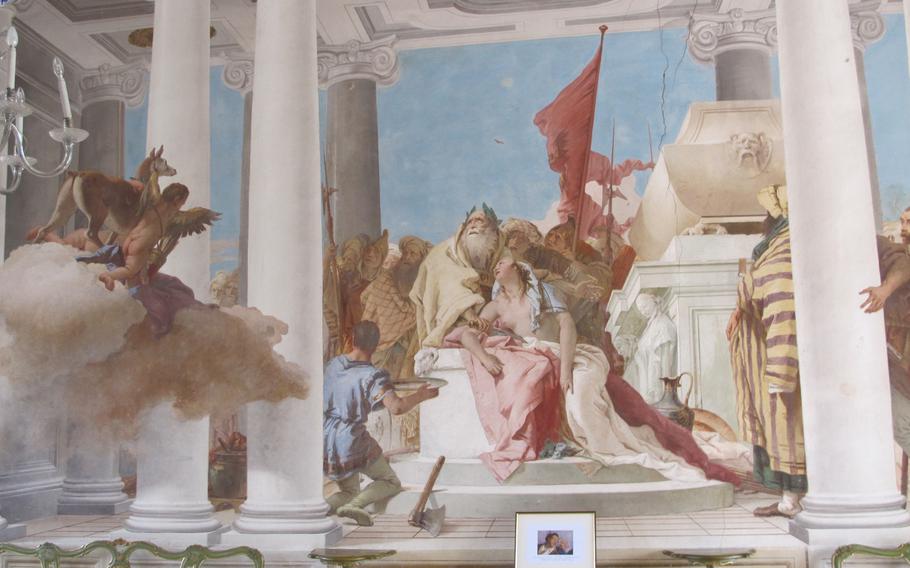 Buy Photo
Tiepolo and his son painted the walls of the Villa Valmarana ai Nani in Vicenza after returning from a job at the Würzburg Palace in Germany. Here in the entry hall is "Sacrifice of Iphigenia," the most famous of the museum's frescoes. (Nancy Montgomery/Stars and Stripes) 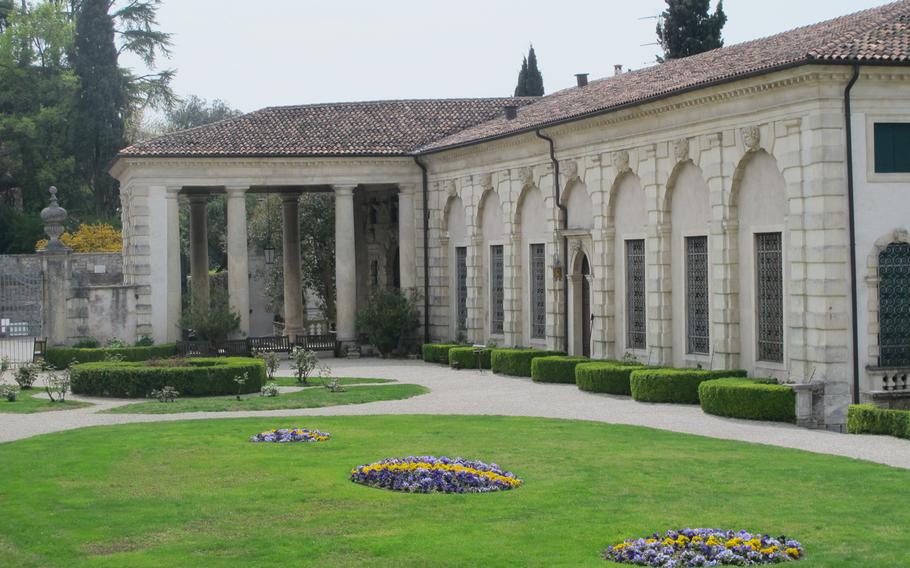 Buy Photo
The museum Villa Valmarana ai Nani comprises two 17th-century buildings, one called the residence, the other called the guesthouse. Both are filled with frescoes by Giovanni Battista Tiepolo and his son Giovanni Domenico Tiepolo. The father is considered one of the best Italian decorative painters of 18th century. Here is a view of the guesthouse. (Nancy Montgomery/Stars and Stripes) 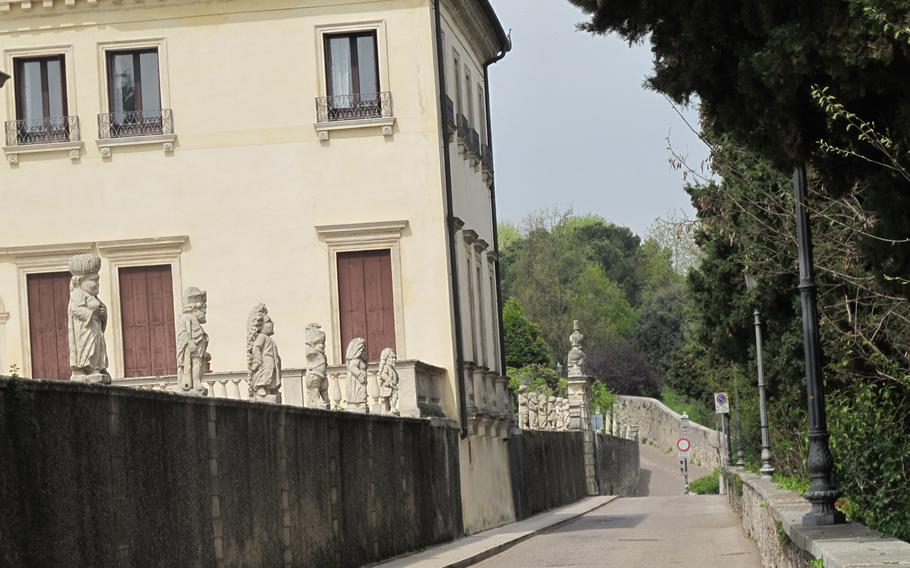 Buy Photo
Villa Valmarana ai Nani is known for a fairy tale involving a dwarf princess who took her life when she saw a full-size prince in the garden. Petrified with grief or punished for their carelessness, the servants, all dwarves themselves, became the top of the wall around the property. (Nancy Montogmery/Stars and Stripes) 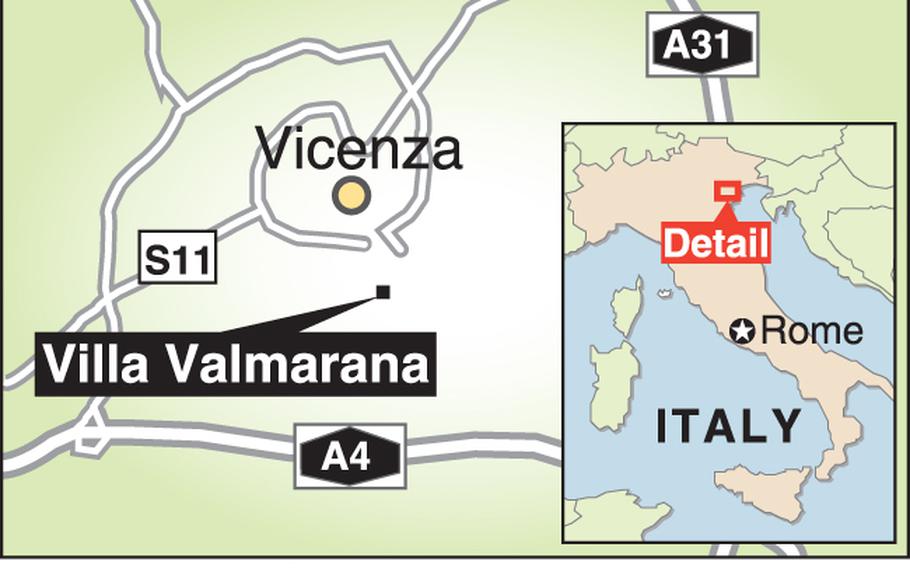 Every picture tells a story, as Rod Stewart noted.

But to fully enjoy the famous, fantastic frescoes adorning the walls of two buildings of the Villa Valmarana ai Nani in Vicenza, Italy, brush up on your Greek myths.

For instance, in the villa’s most famous painting, why is a priest holding a knife to a woman’s naked torso while everyone’s eyes gaze skyward? And why are those two cupids flying over a deer?

The woman is Iphigenia. This is the scene of her sacrifice.

Her father, Agamemnon, had agreed to have her killed.

The Greek commander in chief, who planned to sail his legions to Troy to bring back Helen, formerly of Sparta, had offended the goddess Artemis, and she’d becalmed the winds so that the fleet could not sail. Iphigenia’s sacrifice was supposed to appease the goddess.

To get Iphigenia to the sacrificial altar, Agamemnon told his wife that über-warrior Achilles wanted to wed the girl. That made enemies of the wife, Clytemnestra, and Achilles, a legendary hothead, who was irate he’d been brought into it.

But Iphigenia decided to go along and be sacrificed for the good of Greece.

"Iphigenia’s Sacrifice" was painted in 1757 by Giovanni Battista Tiepolo, considered the greatest Italian rococo painter. His frescoes are hailed as light in color and airy in feel — “full of happiness and cleverness,” according to Goethe.

Tiepolo, a Venetian, was just back in Italy from a job beautifying the Würzburg Palace, along with his son, Giovanni Domenico, when they went to work on the villa, owned by the Valmarana family since 1720.

Iphigenia’s sacrifice, in the entry hall, is the largest of the frescoes. But it’s just one of the stories from Greek myth that Tiepolo painted on the villa walls. Just off the entry hall is a room with a fresco showing “The Rage of Achilles.” In that one, Agamemnon has been at it again, stealing Achilles’ new slave girl, Briseis, whom Achilles had pillaged fair and square. In that one, Artemis grabs an enraged Achilles by the hair to hold him back.

Tiepolo also painted frescoes depicting scenes from chivalric tales: a Crusader named Rinaldo, who was kidnapped by a lovely sorceress, Amida, and indulged in a life of wine, sorceress and song — until brought to his senses by a magic mirror that made him see that slaughtering Saracens was a worthier endeavor.

In the second building, Tiepolo’s son’s elaborate frescoes eschew tragedy and war in favor of fun and exotica. The opera “Turandot” had made China fashionable, so there’s a China room. There’s also a Carnivale room in which an African man comes down the stairs bearing cups of hot chocolate.

But that’s not the end of the story at the villa. A stone wall that separates the property from the road is adorned with scores of statues of dwarves. They, too, come with a tale: Once upon a time, a dwarf princess lived on the property, unaware she was a little person because her parents hired only dwarfs as servants. Then one day she saw a handsome, full-size prince in the garden, realized for the first time that she was different and threw herself from the tower.

The servants were blamed. In one version of the story, their heartbreak turned them to stone. In another, they were punished by petrification then put atop the wall.

HOW MUCH Entry is 10 euros. English translation: Yes