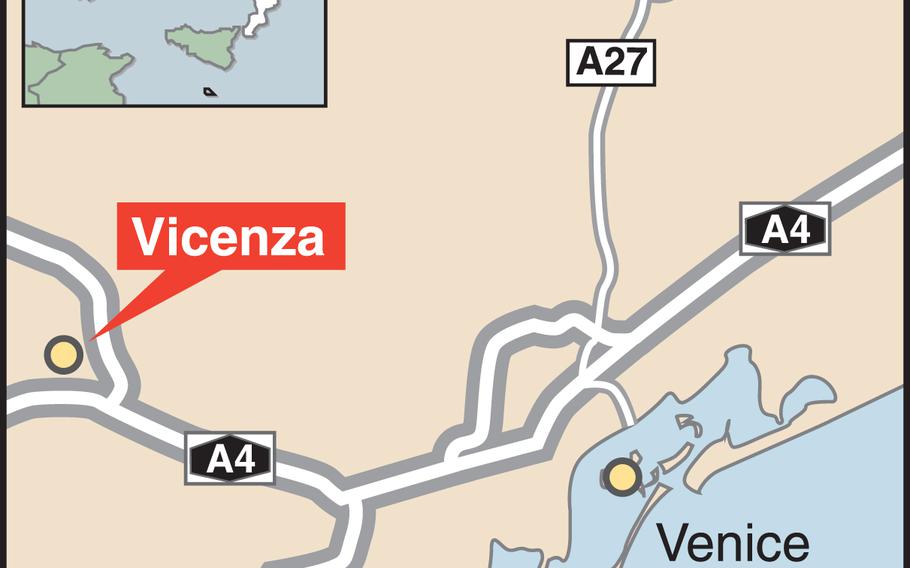 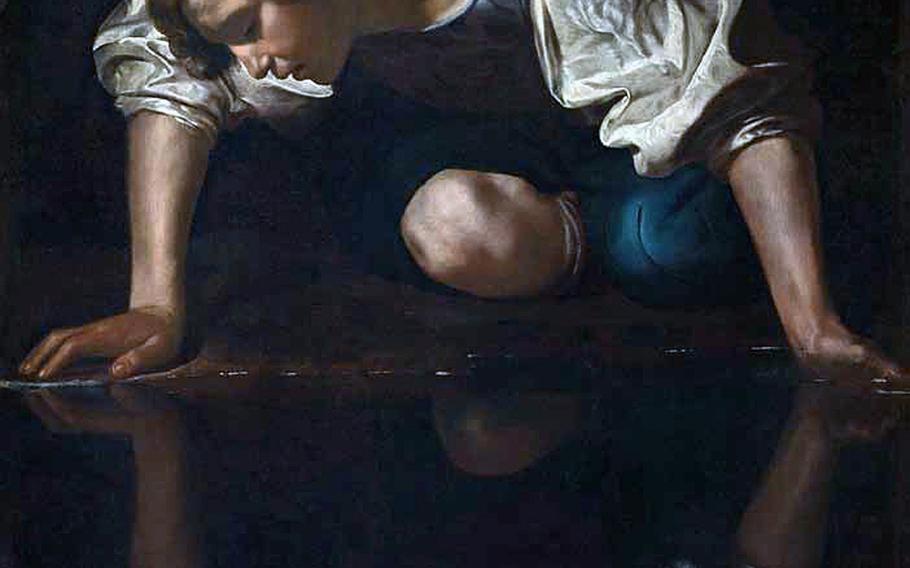 Caravaggio's painting of Narcissus, the nymph who fell in love with his own reflection and provided the modern psychological idea of narcissism is among numerous masterpieces in the Vicenza exhibit. (Photo Courtesy Linea d'ombra) A painting by American artist Edward Hopper, titled "Drug Store," is one of 115 works in an art exhibit that tracks the idea of the evening and the night at Vicenza's municipal museum in the Basilica Palladiana. (Photo Courtesy Linea d'ombra) 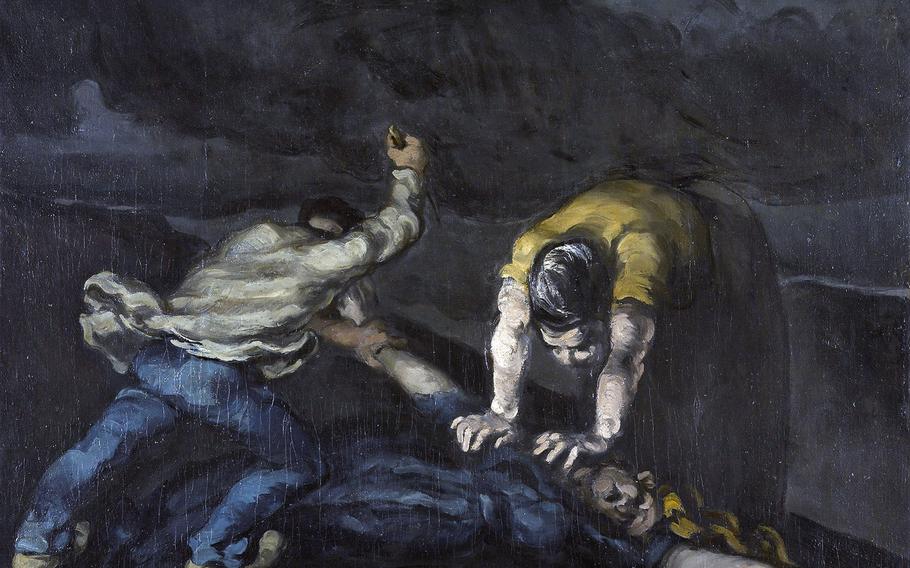 Paul Cezanne is best known for landscapes. Here's an early work, titled "Homicide," included in an art exhibit that tracks the idea of the evening and the night in art from the Egyptians through the 20th Century at Vicenza's municipal museum in the Basilica Palladiana. The exhibit runs through June 2, 2015. (Photo Courtesy Linea d'ombra) 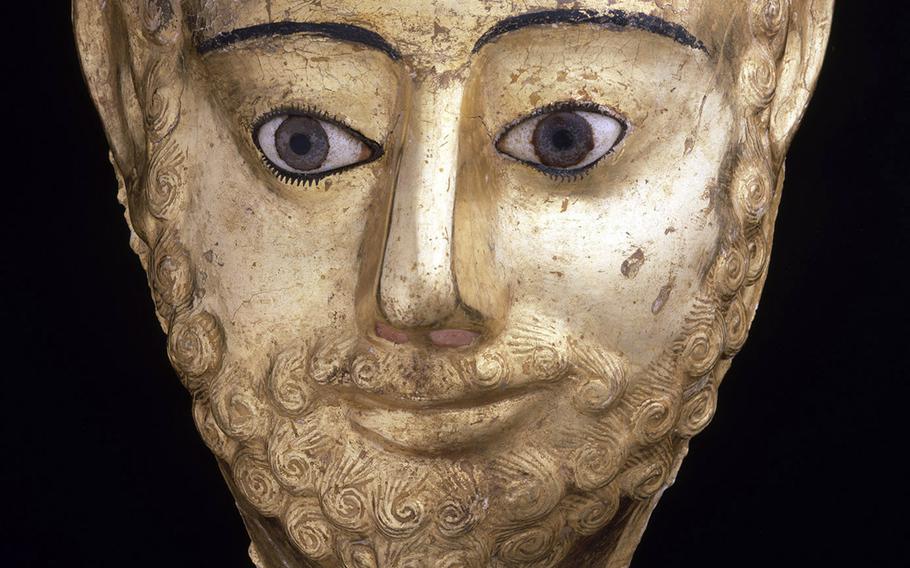 An ancient Egyptian mask that looks quite Greek is among the works at Vicenza's municipal museum in the Basilica Palladiana. (Photo Courtesy Linea d'ombra) 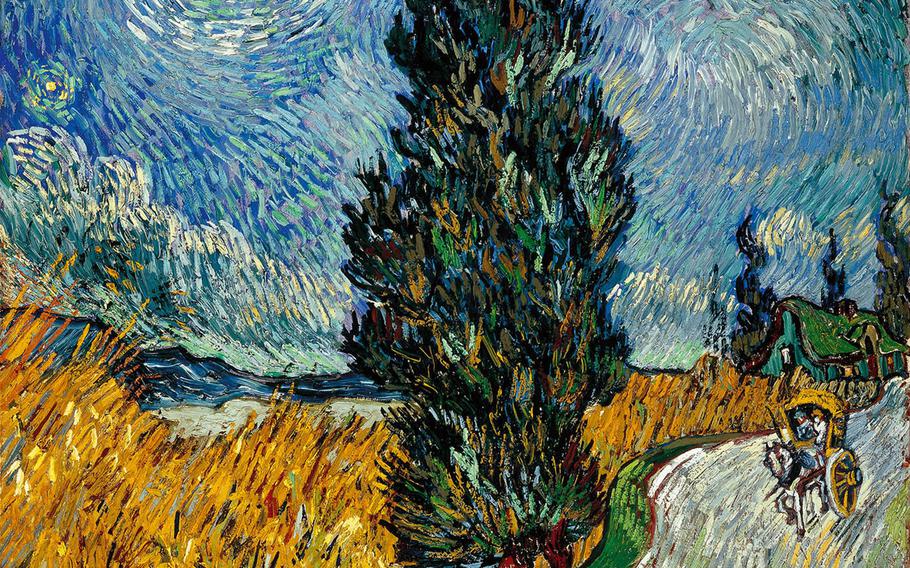 Van Gogh's painting of a country road with cypress and star is considered by experts to show the artist's belief that his own death was approaching, but that the universe was eternal, infinite and filled with love. (Photo Courtesy Linea d'ombra) The Vicenza municipal museum’s new art exhibition, “Tutankhamon Caravaggio Van Gogh,” explores the artistic idea of evening and night — the most mysterious time of day, associated with love, magic, danger and death, from the Egyptians to the 20th century.

At least that’s what the subtitle says. I didn’t always understand the connection during a recent visit, such as when I was looking at an orange and maroon painting by Mark Rothko.

No explanation on individual paintings would be forthcoming, however. Though the exhibit’s website, http://tinyurl.com/ou9wu54, does offer an English summary of the intent of the exhibit, the curation descriptions for the paintings are in Italian only, as is the audio guide.

I did get the golden, glorious sunset in Winslow Homer’s painting of mackerel boats at Gloucester and in Edward Hopper’s painting of a pharmacy, its window aglow in the inky dark, with a sign promising Ex-Lax.

There were also spectacular paintings by Caravaggio, Titian, El Greco, Van Gogh, Turner, Whistler, Mondrian, Klee and Andrew Wyeth. So even if you don’t understand some of them, their beauty and power will cast a spell nonetheless.

The exhibit of 115 artworks, which runs through June 2, is arranged in six thematic sections, according to the website. It begins under a starry ceiling in a room with ancient artifacts and statues found in the Egyptian pyramids, including a depiction of the head of Tutankhamon, and “dwells on the meaning of the eternal spiritual night.”

The second section, with a variety of Renaissance masterpieces “explores the suggestive atmosphere of figures depicted in night settings, especially in paintings depicting the life of Jesus.”

Then came dusky and nighttime landscapes, with artists from the 19th century, from the Romantic period up to Impressionism, followed in the penultimate section of the exhibit by 20th century abstract painters such as Rothko and hyper-realist painters such as Wyeth.

These later paintings are meant to present a “psychological” reading of the deepest night, according to the press release.

The last section contains a mix of artists and centuries; a summary of all that came before. Paul Gauguin is there with his Tahitian women, while Caravaggio’s magnificent Narcissus stares lovingly at his own reflection.

Paul Cezanne’s disturbing “Homicide” shows the opposite of love. But the last painting is Van Gogh’s “Road with Cypress and Star.” Art experts have suggested that the painting reflected the artist’s feeling that he would die soon.

DIRECTIONS Vicenza’s municipal museum is inside the Basilica Palladiana in the historic city center.

COSTS12 euros for adults; 6 euros for minors and 9 euros for students with I.D. and those over 65.

FOODNumerous cafes and restaurants are close at hand.