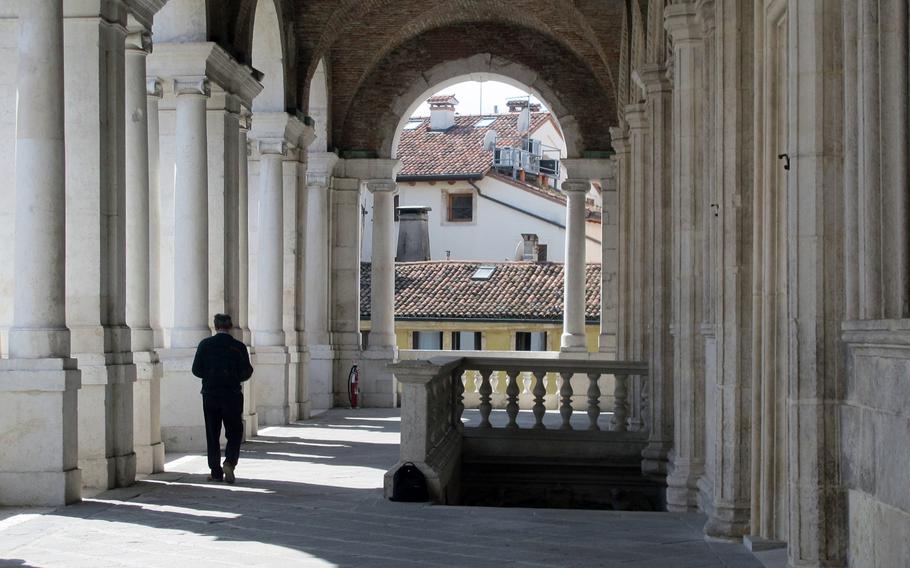 The Basilica Palladiana in Vicenza, Italy, which houses the municipal art museum, is constructed of white marble and features Serlian arches. (Nancy Montgomery/Stars and Stripes)

The Basilica Palladiana in Vicenza, Italy, which houses the municipal art museum, is constructed of white marble and features Serlian arches. (Nancy Montgomery/Stars and Stripes) 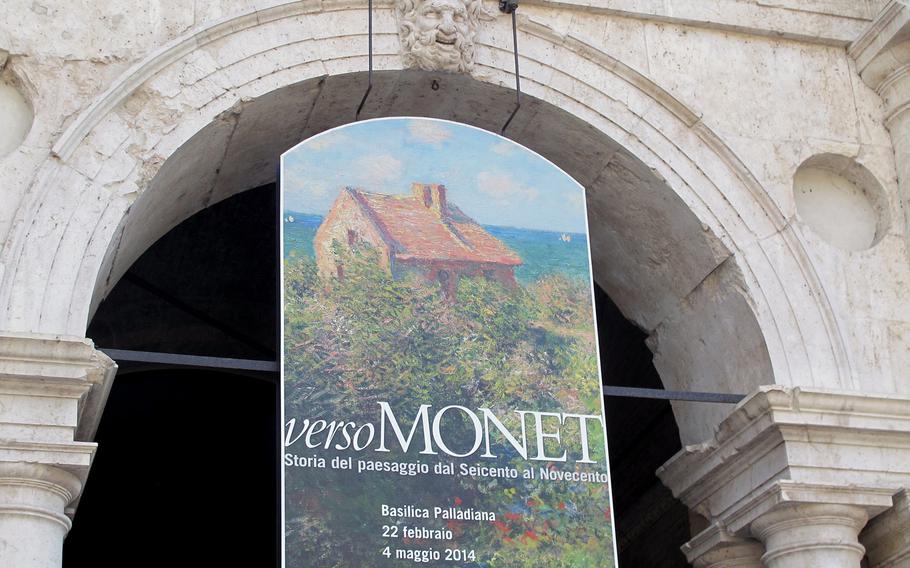 An exhibit of the evolution of landscape paintings, titled "Verso Monet," features a number of works by Impressionists, including Claude Monet. The exhibit can be found at Vicenza, Italy's municipal museum, located in the Basilica Palladiana, until May 4, 2014. (Nancy Montgomery/Stars and Stripes) 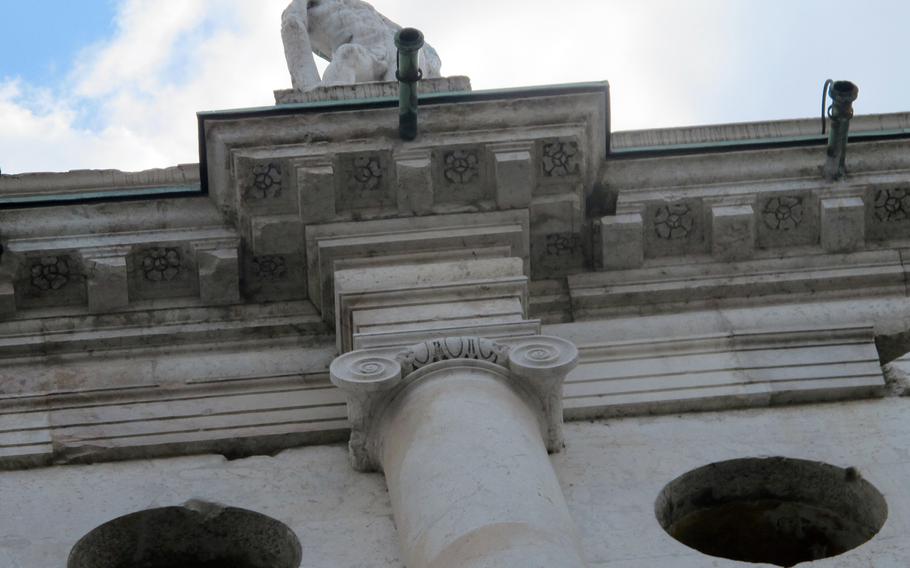 What would a Renaissance building be without statues on the roof? The Basilica Palladiana, Piazza Dei Signori 36100, Vicenza, Italy, offers an example. (Nancy Montgomery/Stars and Stripes) 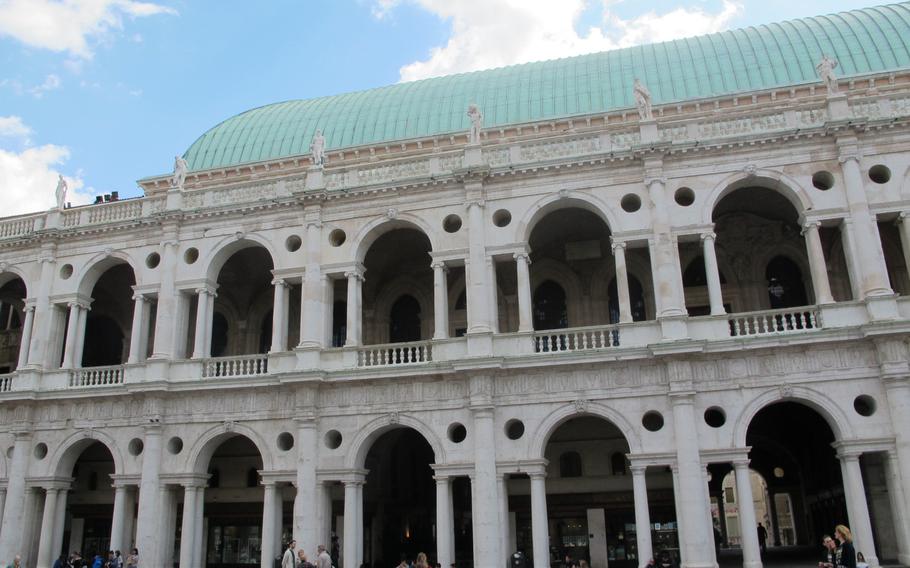 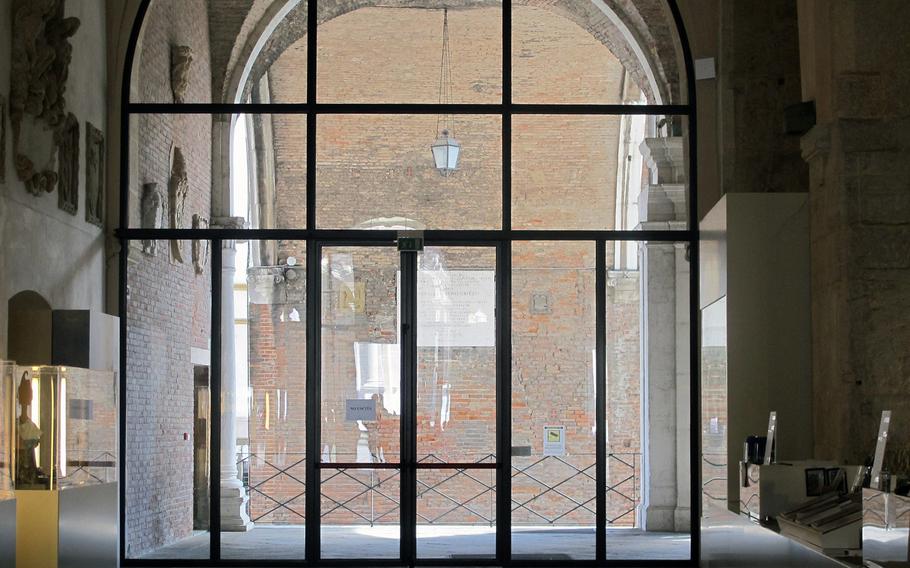 The municipal art museum in Vicenza, Italy, is located in the Basilica Palladiana. The museum punches above its weight with exhibitions of some of the most famous paintings in the world. (Nancy Montgomery/Stars and Stripes) 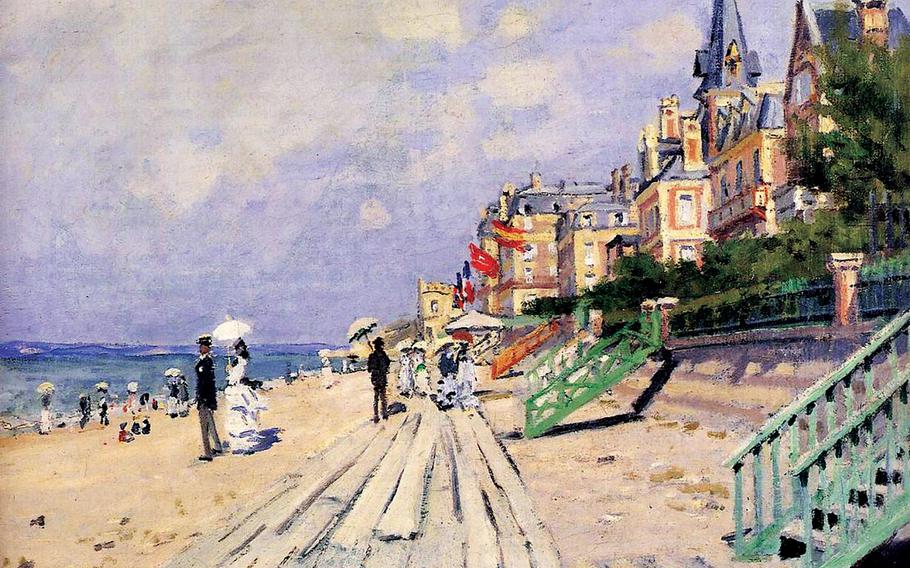 The exhibit “Verso Monet” (Around Monet) in Vicenza, Italy, includes two rooms of works by French Impressionist Claude Monet, including “The Beach at Trouville,” 1870. (Courtesy of wikipaintings.org) 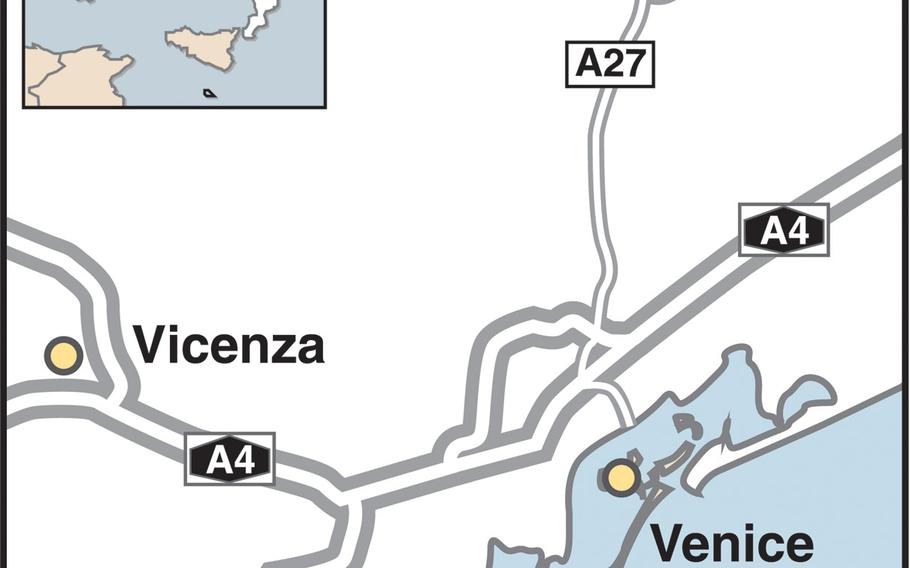 The turquoise-domed, white marble basilica that dominates Vicenza, Italy’s, historical city center is a sight to behold. Massive and gleaming, it was designed in the 16th century by Andrea Palladio, a Vicenza native considered among the greatest architects in the history of Western civilization.

So you could just take in the basilica from a seat at a cafe table in the Piazza dei Signori, have a glass of wine or a cappuccino, and feel the spring sunshine on your face.

But you’d do even better to also get up and go inside. You’ll find an exhibition of luminous landscape paintings that includes two rooms full of sublimely beautiful works by French Impressionist Claude Monet.

Yes, there are waterlilies.

There are also beaches, forests, meadows, volcanoes and a number of paintings of Venice by European and American artists.

The exhibit in the Vicenza municipal museum, stunningly located inside the basilica, features 101 works — scores of them quite famous — illustrating the history of the landscape in European and American art from the 17th to the early 20th century. The exhibit aims to show how the landscape moved from mere background to the subject itself, and the evolution from romantic representations to realistic to impressionistic, to, finally, Monet, who authorities say “strove to capture on canvas the very act of perceiving nature.”

Both I and the Italian children on a school trip loved the American painter J.M.W. Turner’s romantic “The Eruption of Soufrière on April 30, 1812,” which was spectacular, both gorgeous and a little scary.

And it was great to see a winter landscape painted by Paul Gauguin — known best for his Tahitian women — and a dreamy depiction of Venice’s St. Mark’s Square in pale blues and golds by James McNeill Whistler, best known for his mother.

I counted six Van Goghs in the exhibit, including one of blue olive trees titled “Uliveto,” from 1889, touchingly signed “Vincent.”

Then I got to the Monets and never wanted to leave. His method included painting the same scene many times, capturing the changing of light and the passing of the seasons. So there are several poppy fields, Rouen cathedrals and waterlilies, one more lovely than the next. But for my money — and I did buy a poster — there’s nothing more beautiful than his San Giorgio Maggiore at dusk, from his only trip to Venice.

The Verso Monet exhibition at the Vicenza city museum continues through May 4.

Costs 12 euros; 6 euros for minors and 9 euros for students with ID or those over 65.

Food Numerous cafes and restaurants are close at hand.

The municipal museum in Vicenza, Italy, which is housed in the Basilica Palladiana, hosts the landscape exhibit until May 4.

The Basilica Palladiana, above and at right, is a sight to behold in itself with its white marble and Serlian arches.