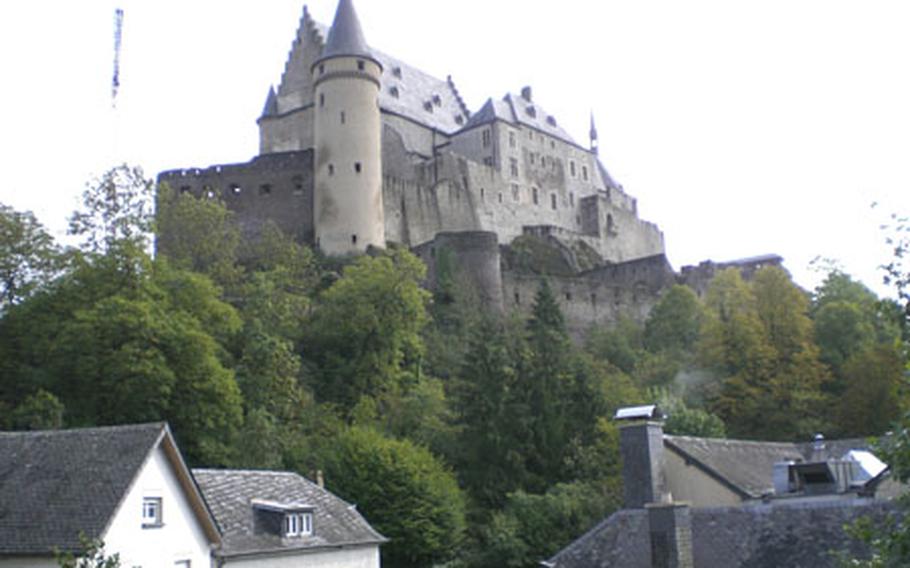 The castle that sits above Vianden, Luxembourg, has been restored so that it resembles what it once was without turning it into fantasy structure. It is visible from just about anywhere in town. (Karen Bradbury / S&S)

The castle that sits above Vianden, Luxembourg, has been restored so that it resembles what it once was without turning it into fantasy structure. It is visible from just about anywhere in town. (Karen Bradbury / S&S) 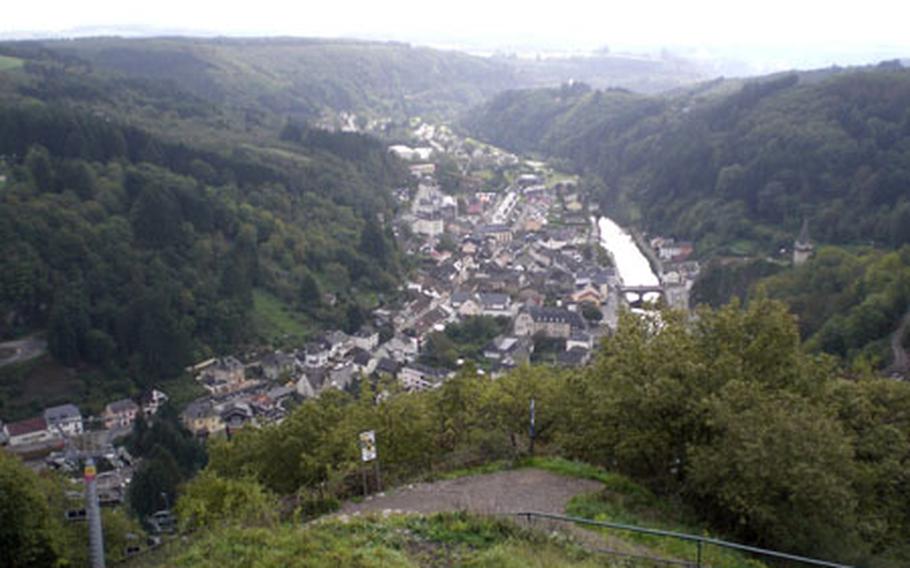 The chairlift -- one of its towers is shown at left -- whisks passengers across the River Our before beginning its ascent. From the summit the castle, seen through the trees at right, and the town of Vianden with the river running through it, are both visible. (Karen Bradbury / S&S) 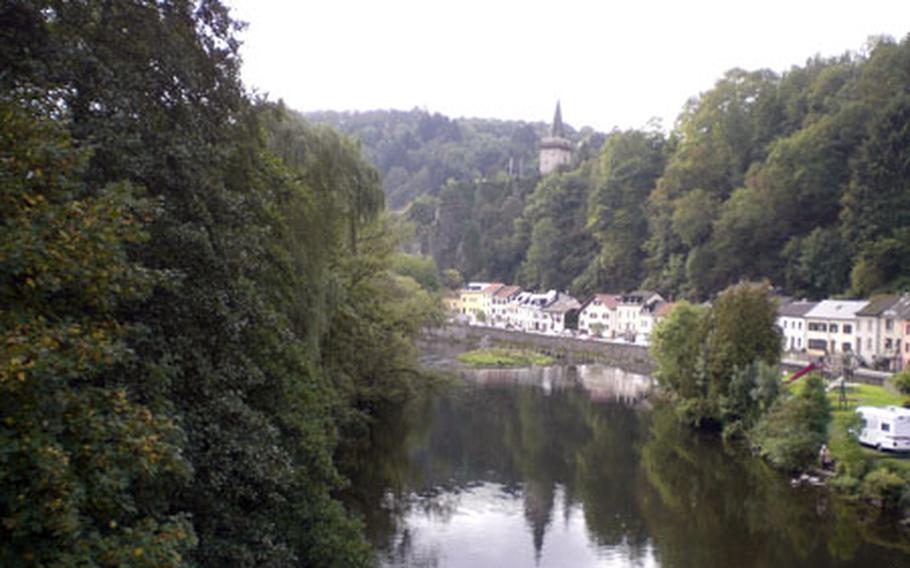 The River Our runs through the town of Vianden, which is crowned by its castle sitting on a rocky bluff. (Karen Bradbury / S&S) Vianden has a strong association with the French poet Victor Hugo, who visited the city four times and was delighted by the Ardennes scenery. This attractive hotel along the river is named after the poet. (Karen Bradbury / S&S)

In my book, castles have to be a certain way. They aren&rsquo;t so interesting when they&rsquo;re just a pile of rubble; too much is left to the imagination. But when restoration projects leave them looking like newly erected condominiums, complete with restaurants and entertainment halls, that&rsquo;s wrong, too.

The castle in Vianden, Luxembourg, is a good example of restorers getting things just right.

But you also have to give credit to the Romans and the Carolingians for the castle&rsquo;s appeal. It was they who chose such a wonderful location high upon a rocky bluff even before construction of the castle kicked off in the 11th century.

Before heading to the castle, take a look at Vianden, a small town, even for a small country, dominated by its big castle.

The town is tucked amid the rivers, hills and valleys known as the Ardennes. Its main thoroughfare starts just below the castle and slopes precipitously downward. On either side of the cobblestone street there are cafes, inns, butcher shops, a bakery and other little shops, all neatly turned out, many with old bubble pane glass and flowerboxes, some of the buildings half-timbered. The Ardennes provide a green and hilly backdrop to the scene.

Vianden&rsquo;s center is bisected by the River Our, with its clear but shallow water running briskly under an ancient stone bridge. Pike, tench, barbell, carp, grayling and brown trout are just some of the fish species that make the Our their own.

Park your car in this vicinity and walk along the bank of the river. Without leaving the town center, you will reach a chairlift &mdash; a simple, wooden, two-seater affair that will whisk you at moderate cost over the river and to the summit of a hill just above the castle.

A well-marked trail through the woods takes you on a downhill journey toward the castle. It&rsquo;s a bit steep in a couple of places, and fallen leaves and pine needles, particularly when wet, make the path a bit slippery. But most will find the walk entirely doable.

The castle itself is well worth a visit, and the cost of admission allows you access to the ramparts, a wine cellar, various chambers, a sweeping view of the countryside below, and a series of exhibits, including one of instruments of torture and photos of visiting notables taken over the past century.

The one big regret of our visit to Vianden was failing to locate the Indian Forest Adventure Park north of the town. A poster at the chairlift&rsquo;s summit billed it as a challenging obstacle course in a natural setting. Visitors can spend about two hours on rope ladders, bridges and swings suspended from trees.

Our idea was to give priority to the castle and drive to the playground later in the afternoon, but we couldn&rsquo;t find it.

With better planning (and the map on its Web site), you will.

Directions: For a scenic drive from Kaiserslautern and Trier, take route B51 to N10, which follows the Moselle River and the Germany-Luxembourg border. For a quicker getaway, take B50. Vianden is about 20 miles from Bitburg and 35 miles from Spangdahlem Air Base in Germany.

Times: The castle opens at 10 a.m. daily and closes at 6 p.m. April through September, at 5 p.m. in March and October, and at 4 p.m. November through February. The chairlift operates 10 a.m. to 6:30 p.m.; shorter hours out of season, and is closed November to Easter. A good time to visit Vianden is when it holds its Christmas market, Dec. 15-16 this year, with a medieval market, music and living cr&egrave;che. A medieval festival is held each summer; this year it is set for Aug. 4-12.

Food: At the summit of the chairlift, there is a cafe with a perch where kids can pose for a nice photo op. There also are dozens of cafes and restaurants throughout Vianden, some with dining areas overlooking the river. For some truly delicious pizza, try Pizzeria La Trentina.

Information: For more on Vianden, contact the tourist information office by phone at (+352) (0) 83-42-57 or by e-mail at viasi@pt.lu. For more on the castle, see www.castle-vianden.lu/english/index.html, and for the chairlift see www.luxembourg.co.uk/chairlift.html. Details on the Indian Forest Adventure Park is at www.tourist-info-vianden.lu/indianforest/index.html, in French and German.