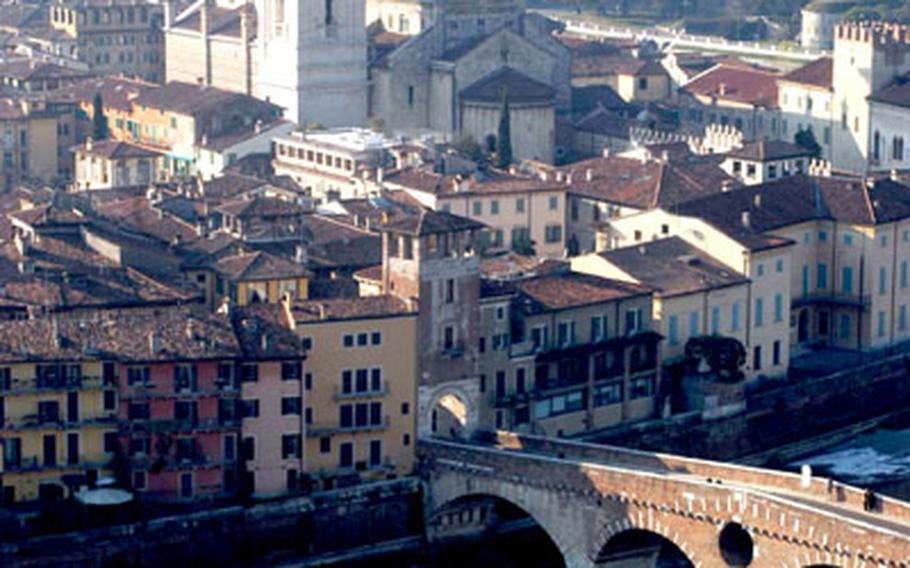 The Duomo (cathedral) and Ponte Pietra (stone bridge) are clearly visible from the foot of the Castel San Pietro, which sits on a hill towering over much of Verona, Italy. (Kent Harris / S&S)

The Duomo (cathedral) and Ponte Pietra (stone bridge) are clearly visible from the foot of the Castel San Pietro, which sits on a hill towering over much of Verona, Italy. (Kent Harris / S&S) A ray of sunlight coming through a window lights up a statue in Verona’s Duomo. (Kent Harris / S&S) A dog bearing a shield with a ladder insignia guards one of the elaborate tombs at the eastern end of the Piazza Dei Signori in Verona. (Kent Harris / S&S)

For many tourists, the Italian city of Verona is best known for an ill-fated couple made famous by a British playwright.

But the city on the Adige River can offer a full day of activities for those who want nothing to do with Romeo and Juliet &mdash; or all those tourists trying to polish a bronzed breast.

There are several walks that cater to a variety of tastes. Following is one that should apply to shoppers, strollers, gawkers and climbers. If you&rsquo;re heavy into shopping, it might be wise to walk this route in reverse.

Start at Piazza Bra, the heart of the city&rsquo;s old downtown. The main highlight is the Arena, which looks a lot like a small version of the Colosseum in Rome. It served many of the same purposes over the years, but these days hosts Nativity scenes during the holiday period and a series of concerts and operas throughout the year.

Leaving the piazza, head northeast on Via Mazzini, where you can window-shop or fork over some euros in the posh clothing stores. Take a left on Via Capello or &mdash; if you can&rsquo;t resist the call of Juliet&rsquo;s reputed house &mdash; go right for a quick detour. The road runs into Piazza Erbe, a small but busy square often filled with wooden stands selling a variety of produce, crafts and souvenirs.

Then pass under the arch on the square&rsquo;s eastern edge. It has a whalebone under it, and legend says the bone will crack when a truly virtuous person walks through. That apparently hasn&rsquo;t happened, although those passing underneath have included several popes.

Next stop is the Piazza Dei Signori. It is framed by several interesting buildings, has a statue of the poet Dante in the center and is dominated by the Lamberti Tower, which can be climbed for a great view of the city.

At the eastern edge of the square is a small group of elaborate tombs. Check out one in a doorway of the building adjoining a small cemetery; it has dogs holding shields with ladders on them.

Continue past the tombs and take a left on Via Archie Scaligere, then the first right and continue straight to Santa Anastacia church, one of the city&rsquo;s major churches. Via Abiamo Massalongo turns into Via Duomo and leads to the city&rsquo;s cathedral; the entrance is right where the street ends. Though the church might not look impressive from the outside, there&rsquo;s plenty to see inside.

After touring the cathedral, turn left on Via Pieta Vecchio and walk a few blocks before taking a left to traverse the Ponte Pietra (stone bridge). The Adige flows beneath it. Those up for a climb and a good view of the city should cross the bridge and ascend the hill via a series of steps that starts right across from the bridge.

Backtracking across the bridge, go left and then take the first right. Don&rsquo;t take the kids into the shop with the cartoonish horse face &mdash; unless they like to dine on equine. Another left will have you standing in front of the Santa Anastacia church again. Retrace your steps toward Piazza Erbe by continuing along Corso Santa Anastacia, which will skirt the piazza and change names a few times until the Castelvecchio looms to the right. The former fortress and religious residence was built in the 14th century and is now an art gallery featuring works by Italian artists.

Head back to Piazza Bra on Via Roma, with more shopping opportunities and a few chances to grab a gelato for the trip back home.

On the QT ...Directions: Verona is on Autostrada A4, about a 30-minute drive west of Vicenza and about two hours from Aviano. Take the Verona-Sud exit and follow the &ldquo;centro&rdquo; signs. After passing the fairgrounds (stay in right lane) and driving over the overpass, get in the second lane from the right and go under the arch. Turn right onto Circonvallazione Raggio Di Sole and take the first left. Entrance to the Arena parking lot is a few blocks on the left.

Times: Many stores close for lunch and some restaurants are open only around lunch and dinner. The main churches are open 10 a.m. to 1 p.m. and 1:30 to 4 p.m. Monday through Saturday, and 1-5 p.m. Sundays. Entrance is restricted during services. The Nativity scene at the Arena continues through Jan. 21.

Costs: Entrance to one of the main churches is 2.50 euros for an adult, 1 euro per student. A pass covering entry to all costs 5 euros. There are discounts for families and large groups.

Food: There are restaurants galore along the main walking routes. Grab a table outdoors in Piazza Bra or Piazza Erbe, duck into one of the neighborhood restaurants or grab a snack and keep walking from a carryout shop. A nondescript shop on Via Roma (second one on the left leading away from Piazza Bra) offers some of the best gelati in Italy.

Information: A tourist office in the southeast corner of Piazza Bra is open 8:30 a.m. to 7 p.m. Monday through Saturday, and 9 a.m. to 5 p.m. Sundays. English is one of several languages spoken. For details, call 0458-068680, e-mail iatverona@provincia.vr.it, or check the Web site www.tourism.verona.it.